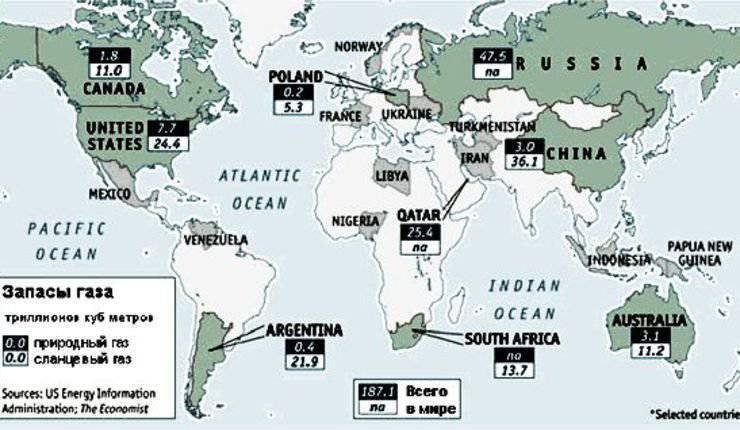 Write this short note I was led by a discussion around the real economy of shale gas in the United States and the world. On the one hand, over the past 5 years, the development of the industry has been accompanied by a massive PR campaign in the press of the USA and Europe, calling for investment in the industry. On the other hand, the Russian media and some of the “green” media in continental Europe express concerns about the real cost of production and the risks of shale gas production.

In particular, the Russian press states that the costs of shale gas production are much higher than the current price level in the USA ($ 119 / thousand cubic meters) and amount to $ 212-283 / thousand cubic meters. According to the pessimists, the fast falling flow rate of shale gas wells, which lose 60-80% of flow rate during the first year of production, is to blame.
The consultants analyzed the finances of the leading 50 companies in the US oil and gas industry for five years, 2007-2011. At the time of preparing the analysis, the finances for 2012 were not yet ready. However, based on this report, several important conclusions can be drawn:

(2) From the statistics of the leading companies in the shale gas industry (Chesapeake Energy, Devon Energy, Continental Resources, EOG Resources) it follows that operating costs in the total pool of costs of companies in the industry is 41%. Another 57% is for capital expenditure and depreciation (DD&A), the remaining 2% for administration and other costs.

(3) Therefore, total cost shale gas including all costs should be about $ 229 / thousand cubic meters. m, which is really much higher than the level of current wholesale prices almost doubled.

However, is this inconsistency a cause for panic? For companies producing shale gas - yes. For consumers, no. The fact is that even this level of gas prices is significantly lower than the prices of natural gas in other regions of the world. For example, in Europe, natural gas is now worth $ 375 / thousand cubic meters. m (spot market UK NBP), in Asia, $ 589 / thousand cubic meters. m (according to the customs statistics of Japan in December 2012 g.).

The reader may ask, how is this abnormally low level of wholesale prices for natural gas maintained on the American market? The secret is in excessive competition and low barriers to entry into the industry, as well as the low profitability of shale gas production is compensated by the high profitability of associated shale oil and condensate production, the prices of which far exceed the cost price. For example, one of the industry leaders, Chesapeake Energy, accounted for 21% of the production volume in the third quarter of 2012, and it is constantly growing.

Since oil prices have not fallen as much as natural gas prices, but remain high, companies are actively investing in the production of shale oil and condensate. The leaders in this segment are EOG Resources (215,000 bpd), Chesapeake Energy (143,000 bpd), Continental Resources (103,000 bpd) and Whiting Oil (71,000 bpd). Based on the reporting of the companies in the shale oil sector, the average cost of oil produced (excluding logistics to the target markets) is $ 37 / barrel. This is certainly higher than that of the Gulf countries, but allows you to actively increase the volume of shale oil production in the United States, which has already reached 1.8 million barrels per day.

The growth of the oil shale industry in the United States itself has not yet had any effect on Gazprom’s competitiveness on the European gas market and the prospects for unconventional gas production by Ukraine. There are several reasons:

The existing terminals in the United States were built not to liquefy, but to accept and regasify liquefied gas, so their conversion will take time and considerable resources. Typically, liquefaction terminals require 3 times more capital costs than regasification terminals of the same capacity. The duration of the terminal conversion may be about 4 years.

As for Ukraine, in the case of Yuzovskaya Square, we are talking about Shell’s participation in the development of dense rock gas, tight gas, 35 has been a commercially mature technology for years, the risks of which are significantly lower than the risks of shale gas production. It is worth noting that, in the USA itself, dense rock gas gave about 30% of production before the shale gas phenomenon appeared at the end of 2000х. Nevertheless, despite the maturity of the technology itself, the risks of its implementation in Ukraine remain. The key success factors will be the quality of resources and the localization of capital and operating costs for the extraction of dense gas on the Ukrainian market. If we compare with similar projects in other countries, the cost of dense Ukrainian gas will be high, about $ 260 / thousand cubic meters. m, but, nevertheless, below the price level of Gazprom $ 425 / thousand cubic meters. m

Summarizing, we can come to the same conclusion: yes, the pricing of shale gas in the United States is largely distorted by the rapid growth and excessive competition in this industry, and now the wholesale prices for 48% are lower than the actual cost of production.

This situation is very similar to what happened in East Texas, when huge oil fields were discovered. They rushed to develop all hundreds, if not thousands of companies. Oil prices fell below the cost of production - to 13 cents per barrel. The US oil industry was able to get out of a critical situation with the support of the Roosevelt administration, which began a tough market regulation. This led many small manufacturers to go bankrupt. The market has established price stability with a simultaneous increase in business profitability. Apparently, sooner or later, such mechanisms will be in demand in order to stabilize the shale gas market, where today there is the same anarchy as 80 years ago in Texas and Oklahoma.

However, this does not mean that the American shale gas industry is uncompetitive on the global market, because gas prices in other regions (Europe, Asia) exceed the cost of US shale gas 1.6 - 2.6 times. The situation with undervalued gas prices in the USA is partially supported by high oil prices. We can expect that weak players with high costs will leave the shale gas industry, and strong players will refocus on shale oil, as a result of which the spot prices of natural gas in the United States will approach its real cost (about $ 229 / thousand cubic meters). The Ukrainian project of Shell relies on a mature technology for the extraction of dense gas, which has already been commercially proven for 35 for years. Theoretically, the prime cost of gas of dense rocks of Ukrainian production will be lower than Gazprom prices by 39%, however, only the sales can show what the actual volumes of commercial gas production of Yuzovskaya area are.

Ctrl Enter
Noticed a mistake Highlight text and press. Ctrl + Enter
We are
Interest MatrixList of destroyed the largest and most high-tech enterprises
56 comments
Information
Dear reader, to leave comments on the publication, you must to register.