Russia and Georgia: close contacts of the third degree 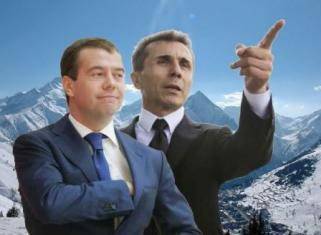 The last decade of January was very fruitful in terms of the appearance of information about the relationship between Russia and Georgia. It can be said that during these few days more positive events took place in the Russian-Georgian contacts than in the last 4-5 years. And the more often these events manifested themselves, the more criticism came from the camp of the current Georgian President Saakashvili.


At first, Saakashvili and his closest comrades in the party were alarmed by the words of the Prime Minister of Georgia, uttered during the visit to neighboring Armenia. Bidzina Ivanishvili made a number of statements, which caused a strong reaction among those who in recent years have become accustomed to consider the only correct and productive opinion of Mikhail Saakashvili. One of such statements by the head of the Georgian Cabinet of Ministers was that Tbilisi should follow the example of Yerevan in terms of establishing foreign policy relations. According to him, Armenia has been able to build a policy in which it has quite close contacts with both Western partners and Russia.

By the way, the words that Georgia should take an example from Armenia caused a rather controversial, if not to say negative reaction from the Azerbaijani diaspora in Georgia. Obviously, Ivanishvili, saying that it’s time to take an example from the multi-vector foreign policy of Yerevan, didn’t keep in mind the political disputes between Armenia and Azerbaijan, and had in mind only the choice between the West and Russia, but this did not interest his critics literally hit the head of the Georgian government.

During his visit to Armenia, Ivanishvili expressed another thought, which sounded quite ambiguous from the point of view of opposition politicians. The prime minister, in particular, said that Georgia’s course towards North Atlantic integration will not change in the near future. It remains a mystery whether the Georgian Prime Minister meant that these relations will change somewhat later, or the words “in the near future,” as they say, flew out by sheer chance ... But anyway, the calls for Georgia to follow the example of Armenia and the words about the immutability of the “in the near future” of the pro-Western course gave the reason for the main opponent of Ivanishvili, President Saakashvili, to express the words that the prime minister is flirting with “militarist Russia, which occupies about 20% of Georgia’s territory”

For natural reasons, a number of media outlets that are guarding the interests of the current Georgian president jumped at the said words of Ivanishvili and put them almost proof that Ivanishvili is a protege of the Kremlin and the FSB. Further, conspiracy theories about the Russian trace in the fate of Ivanishvili were only gaining momentum, and intensified even after the prime minister spoke with his Russian counterpart on the sidelines of the summit in Davos for a short time.

After this short dialogue, Ivanishvili even had to justify himself to a certain extent, saying that they only met Medvedev as politicians and did not discuss any important issues from the point of view of Russian-Georgian bilateral relations.

However, Saakashvili and his pretty thinner regiments of supporters no longer heard these “excuses” from Ivanishvili, and indeed could they have heard when the Catholicos-Patriarch of All Georgia also added fuel to the fire. The chief hierarch of the Georgian church arrived in Moscow, where he received the award of the Foundation for the Unity of Orthodox Peoples, met with Patriarch Kirill and President Vladimir Putin. At the same time, Elijah II, addressing the Russian leader, said that he sends greetings from the Prime Minister of Georgia and hopes that relations between the Russian Federation and Georgia will overcome the political impasse. At the same time, Elijah II allowed himself to say that the relations between the two countries were stalled not because of the fault of Russia or Georgia, but solely through the fault of individuals taken separately.

Mikhail Saakashvili’s supporters of the United National Movement party in Georgia immediately afterwards stated that the Catholicos-Patriarch of All Georgia takes on too much and forgets that he says such words while in the “occupying state”. Most of all, the Georgian parliamentarians from the UNM, headed directly by Mikhail Saakashvili, were outraged by the statements of Ilia II. In particular, deputies Sergo Ratiani and Zurab Dzhaparidze said, quote:

“A conversation with exaggerated respect with the first person of the enemy state will be to the detriment of Georgia’s sovereignty.”

At the same time, Ratiani and Japaridze highlighted the words of the Catholicos about who is to blame for breaking the ties between Georgia and Russia. According to the version of these parliamentarians, Ilia II obviously hinted at Mikhail Saakashvili and thereby denigrated his honest and immaculate name ...
After all these described perturbations, to one degree or another relating to Russian-Georgian relations, a very interesting interview with the BBC Russian Service was given by the Minister of Defense of Georgia, Irakli Alasania. The same Alasania, who during the South Ossetian conflict of the 2008 model of the year, was the ambassador of Georgia to the UN and actively participated in the most powerful political pressure on Russia, using, among other things, non-original disinformation flows ... Today Alasania heads the military department of Georgia, entering simultaneously with this (together with his party) into a coalition with the “Georgian Dream”.


So, the question was asked to Alasania about why Georgia still does not want to sign an agreement on the non-use of force with Russia? The subtext of the question obviously sounded: if Georgia does not sign an agreement on the non-use of force against Russia, does this mean that Georgia still keeps in mind a military solution to the issue of returning South Ossetia and Abkhazia to its womb?
In response to this, Alasania stated that Tbilisi was ready to sign the declaration on such terms as the Russian Federation admits that it occupies 20% of the territory of Georgia. At the same time, Alasania solemnly assured all those who followed the course of his interview that Georgia today has no plans to resolve issues with territorial problems by military means. Translating all this into a more comprehensible language, Alasania “encouraged” everyone by the fact that he didn’t intend to repeat Tbilisi like adventures like the one that Mr. Saakashvili had arranged for 2008 in August. They say Georgia will not attack Russia ... No more, no less ...

Well, for now the politicians and religious figures of Georgia only speak about the possibility of positive contacts with the Russian Federation, the business of the two countries decided to go on a more rapid schedule. In particular, in the near future, such goods from Georgia as wine and mineral water may appear again on the shelves of Russian stores. Only upon closer examination of these products, it turns out that for some time the same mineral water of the famous brand “Borjomi” is not so Georgian. No - of course, it expires from sources located in Georgia, but only to whom does it now belong? .. The fact is that the widow of businessman Badri Patarkatsishvili, Mrs. Gudaladze, decided to sell a certain percentage of IDS Borjomi shares. According to Forbes, a controlling stake in this company, which owned the right to use the Borjomi brand, now belongs to the Alfa Group Financial and Industrial. And Alfa-Group is a Russian company, which already includes such structures as Alfa-Bank, Rosvodokanal, Russian Technologies, Turkcell (the cellular operator of Turkey), Belarusian trade network BelMarket, etc. that Borjomi will now come to the Russian market in the format of products manufactured by the Russian company. And if you consider that Russian business is also interested in Georgian production of alcoholic beverages, it becomes clear that, despite Saakashvili’s desire to isolate the Iron Curtain from Russia, this curtain turns out to be large economic gaps ...

It is obvious that the more such points of contact between Russia and Georgia manifest, the less chance for their destructive rhetoric is left to those who claim that an irresistible gulf has grown between the Russian and Georgian peoples and there is no sense in overcoming it. In the end, even through the most impressive abysses, hinged bridges are built - let for the beginning shaky, but quite capable of eventually turning into something more. But there’s a lot of work to do. On the part of Tbilisi, especially ...

Ctrl Enter
Noticed oshЫbku Highlight text and press. Ctrl + Enter
We are
Ivanishvili told the terrible truth about Russia, or Two of the Georgian casket ...Saakashvili leaked, or Bog for Bidziny
Military Reviewin Yandex News
Military Reviewin Google News
69 comments
Information
Dear reader, to leave comments on the publication, you must sign in.