The Israeli Air Force hit the suburbs of Damascus 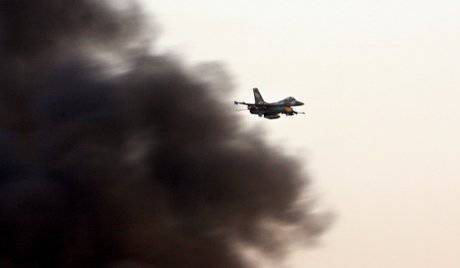 The target of the aircraft was the military research center of the Ministry of Defense of Syria in Gemray near Damascus. According to preliminary data, two people died, there are wounded. The building of the center and one of the neighboring buildings were completely destroyed. There is no explanation from Israel yet.


Israeli airplanes entered Syrian airspace on a low altitude on the north side of Mount Hermon on Wednesday morning and were not detected by radar. The communiqué refuted reports previously reported by foreign media that Israeli pilots allegedly attacked a military convoy, which followed from Syria to Lebanon.

"The destruction of the facility in Gemrai is a blatant violation of the sovereignty of Syria," the Syrian military command said. This attack, the statement notes, clearly proves Israel’s direct involvement, along with Turkey and Qatar, in the terrorist campaign against Syria.

"The new aggressive action will add to the list of Israeli crimes against Arabs and Muslims, but it will not weaken Syria and its role, it will not force the Syrian people to refuse to support liberation movements, the just cause of Arabs and Palestinians," the document says.

Recall that at the beginning of the week, Israeli Deputy Prime Minister Silvan Shalom announced that the Jewish state would be forced to use force if chemical weapon will fall into the hands of Syrian or Lebanese militants, "This would be the intersection of all the" red lines "that would require a different approach, including even a preventive operation. In principle, this should not happen," the Israeli politician said then.

Chemical weapons can be stored in a military research center near Damascus, which was hit by the Israeli Air Force, reports Reuters news agency referring to diplomats from three countries on Thursday.

"In Jamray (between Damascus and the Lebanese border), allegedly, chemical weapons are stored, and perhaps the convoy of trucks that Israel claims was hit was near this object when it was attacked," the agency reports. At the same time, sources exclude that chemical weapons could be transported directly on convoy vehicles, adds Reuters. One of the Western diplomatic sources told the agency that the purpose of the attack was a truck with weapons, in particular, with missiles or anti-aircraft complexes, heading for Lebanon.

Other sources in the United States confirmed to the Associated Press that the attack was on a convoy that, according to Israel, could carry weapons to destroy air targets.

At the same time, the UN has no information about the impact of the Israeli air force on Wednesday in Lebanon and Syria. This was announced on Wednesday by the deputy spokesman for the general secretary of the world organization Eduardo Del Buay.

According to him, the UN peacekeepers deployed in southern Lebanon drew attention to the increased activity of the Israeli Air Force. "The UN forces recorded many incidents of intrusion into the airspace of the country. This is all the information that we have," said Eduardo Del Bui.

Meanwhile, the news Al-Watan service reported Wednesday of fierce fighting in the southern outskirts of Damascus - in Kadam, Hajr al-Aswad and Tadamuna, as well as in the northern part of the Yarmouk refugee camp. Armed extremists, the newspaper notes, are trying to expand the war zone on the outskirts of the capital. Army units pursue their formations in Mlikh, Sbein and Duma.

Due to the deterioration of the situation, the military postponed the process of returning residents to the suburb of Harastu, most of which was released at the beginning of the week.

The political sensation was the statement by the head of the National Coalition of Syrian opposition and Revolutionary Forces (NKORS) about their readiness to engage in dialogue with government officials. Sheikh Ahmed Muaz al-Khatib, published on Wednesday on his page on the social network Facebook a statement in which he explained that he was taking such a step "in the name of stopping the bloodshed and saving the lives of hundreds of thousands of civilians."

"I received news that the Syrian government invited the opposition to dialogue and instructed the Prime Minister to lead it. Therefore, given the plight of my country and people, I declare that I am ready to sit at the negotiating table in Cairo, Tunisia or Istanbul directly with the representatives of the Syrian regime, "- said the leader NKORS. He called his decision a gesture of "goodwill", demonstrated in order to arrive at a political settlement of the crisis and the beginning of the transition period.

At the same time, al-Khatib set forth two preliminary conditions. Firstly, this is the release from 160 prisons of thousands of participants in the uprising, "first of all, arrested women and political prisoners in Sednaia", and, secondly, the issuance of new passports by Syrian embassies to emigrants or at least two years .

The initiative of the sheikh, who belongs to a prominent family of Muslim theologians, according to unofficial sources, caused a positive response in Damascus. The irreconcilable opposition in the person of the Syrian National Council, which is part of NKRS, however, immediately rejected the decision of al-Khatib, stressing that his move "does not share the rest of the coalition leadership."

Ctrl Enter
Noticed oshЫbku Highlight text and press. Ctrl + Enter
We are
The action “Military service under the contract is your choice!” In Rostov-on-Don: future contract servicemen, exhibitions and “Russian Knights”Reports from the militia of New Russia for 20-21 September 2014 of the year
Military Reviewin Yandex News
Military Reviewin Google News
412 comments
Information
Dear reader, to leave comments on the publication, you must to register.