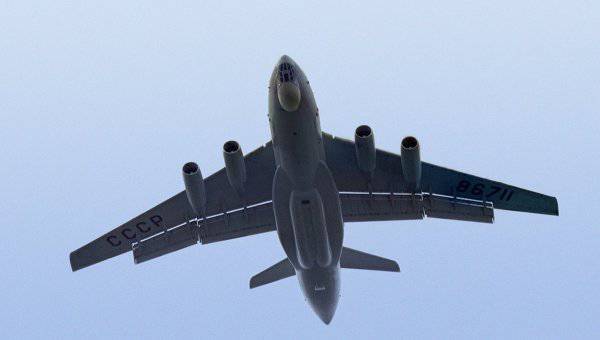 The route took place in the area of ​​test flights of the Ulyanovsk-Vostochny airport at altitudes up to 10 thousands of meters.

In the near future, the flight model IL-76MD-90А will be sent to Zhukovsky near Moscow to continue the flight tests.

IL-76MD-90А is a deep modernization of the famous military transport aircraft IL-476, which was previously produced at the Tashkent aircraft factory. In 2006, it was decided to transfer production to Ulyanovsk. On IL-76MD-90А a new flight-navigation complex is installed. All indicators are displayed on liquid crystal displays, the aircraft has a modern digital glass cockpit, changes have been made to the design of the wing, as well as to the landing gear.

In October, the UAC and the Ministry of Defense of the Russian Federation signed 2012 for the supply of heavy transport airplanes IL-39MD-76А for 90, which are planned to be manufactured at Aviastar before the year 2018. In general, up to 2020 of the year, Aviastar may launch up to 100 of such aircraft.

Aviastar-SP CJSC, a member of the UAC, is one of the largest manufacturers aviation technicians in Russia and the CIS. The existing facilities of the plant are designed for serial production of up to 40 Tu-204 aircraft per year. In total, during the existence of the plant, 36 An-124-100 Ruslan aircraft, 48 aircraft Tu-204, as well as resource and flight models Il-76MD-90A were produced at it.
Ctrl Enter
Noticed oshЫbku Highlight text and press. Ctrl + Enter
We are
Innovation Day of the Southern Military District: the main battle tank T-90A
Military Reviewin Yandex News
Military Reviewin Google News
163 comments
Information
Dear reader, to leave comments on the publication, you must to register.