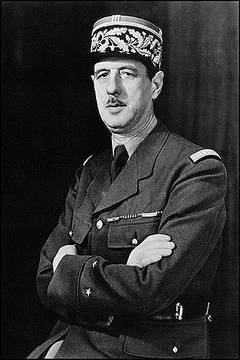 He is called the "last great Frenchman," in his historical Roles in the 2005th century are certainly compared with Churchill and Roosevelt. Having lived a long eighty-year life, he really deserved these reviews. Charles de Gaulle became a symbol of patriotism, the struggle against Nazism, the revival of free France and the founding father of the modern French state for the citizens of his country. And when the television competition “The Great Frenchman of All Time” was held in 2006-XNUMX, no one doubted the final result: as expected, Charles de Gaulle won an unconditional victory.

He was born on November 22 1890, in an aristocratic family, received an excellent education, graduated from the prestigious famous military school. He fought with honor in the First World War, rising to the captain, was awarded, wounded several times, captured, tried to escape five times. After his release, he returned to his homeland, got married, graduated from the Higher Military School and was mired in routine work.

Although it cannot be said that between the two wars Charles de Gaulle was completely oblivious, making an ordinary officer career. He not only taught, worked in the apparatus of Marshal Pétain, served in Lebanon, but also proved to be a military theorist. In particular, he was one of the first to say that a future war is a war tanks. One of his books on military tactics in 1934 was translated into German in Germany, and in 1935, with the assistance of Tukhachevsky (whom de Gaulle met in captivity), published in the USSR. In 1937, he received the rank of colonel and was appointed commander of a tank regiment in the city of Metz. There he was met by the war. 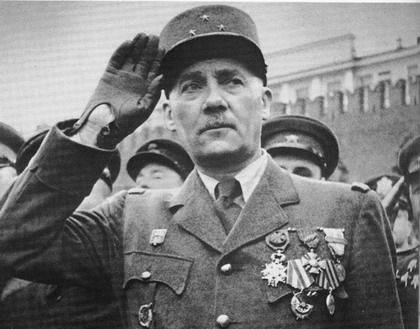 De Gaulle was ready for war, but not France. His vigorous and ambitious nature was waiting in the wings (he was still dreaming about the feat in the name of his country in his youth), but France was immediately shamefully defeated, and the only French Marshal Henry Philippe Pétain at the time recognized her defeat and concluded a truce with Germany.

But de Gaulle did not recognize the surrender and the resulting Vichy collaborationist government headed by Petain. De Gaulle, who for three weeks of a real war, being the commander of the armored divisions of the 5 Army, was first promoted to brigadier general and then appointed deputy minister of war, flies to England. And already 18 June 1940, at the BBC studio in London, makes a historic appeal to compatriots: “France lost the battle, but she did not lose the war! Nothing is lost, because this war is a world war. The day will come when France will return freedom and greatness ... That is why I, General de Gaulle, appeal to all French to unite around me in the name of action, self-sacrifice and hope. Whatever happens, the flame of the French Resistance must not go out and will not go out. ”

He created the organization "Free France", which was immediately recognized by Britain and the United States, and a year later, after Germany attacked the USSR, and the Soviet leadership. In the future, renames it to "Fighting France."

Under the banner of de Gaulle, almost immediately the 50 of thousands of Frenchmen who were in England stood up: those who escaped from Dunkirk, were wounded in Spain, those who could hear de Gaulle's call and move to foggy Albion.

But at first it was not easy with overseas territories: most of the French colonies swore to the Vichy government. Characteristically, the first thing Churchill did, after France capitulated, was to blow up the French fleet based off the coast of Algeria so that the Germans and Vichyists could not use it against the British.

De Gaulle launched a most serious struggle for influence in the colonies and soon achieved success: first Equatorial, then, not without difficulty and not all, North Africa swore allegiance to "Fighting France." At the same time, he tried his best to avoid the collision of Vichyists and Gaullists, that is, the French between themselves.

In every way he sought to unite all the French, so he tried to lead the Resistance in France itself, where the positions of the Communists were strong, and all the isolated forces in the colonies. He constantly visited various places where the French resistance was born. I also visited the USSR where I was blessed by the legendary Normandie-Neman squadron. 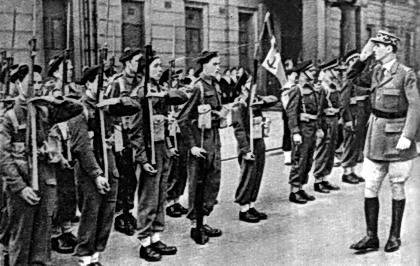 De Gaulle tried to overcome the split, unite the nation in the fight against fascism. At the same time, he fought with everyone, primarily with the United States and Britain, so that they would not engage in the redivision of the world, that is, they would not seize the former French colonies during the liberation and take control. His next task was to force the allies to take him and his movement, France as such, seriously and on an equal footing. And de Gaulle coped with all these tasks. Although it seemed almost impossible.

France participated in the landing in Normandy not in the first roles, but de Gaulle's troops and he were the first to enter Paris, which, we note for justice, was largely already liberated as a result of the communist uprising. The first thing de Gaulle did was to light an eternal flame on the tomb of the unknown soldier, put out by the Germans four years ago, on the Square of Stars under the Arc de Triomphe.

After the war with de Gaulle, what happened with Churchill happened, which in general often happens when people show black ingratitude towards their glorious sons: the national hero, the savior of France was sent to rest. More precisely, at first his Provisional Government held all the necessary first measures, which made it possible to establish post-war life, but then a new constitution was adopted in France and a fourth, and again parliamentary, republic was established. And de Gaulle was not on her way with her. He has always advocated strong executive authority.

De Gaulle went to the estate in the village of Colombey near Paris, which he bought back in the 30s, and which he loved very much. Began to write military memoirs. But de Gaulle's rest "only dreamed." He, as has happened before, was waiting for "his finest hour." And France called her general when the national liberation uprising broke out in 1958 in Algeria. 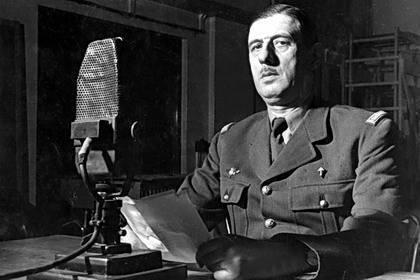 But he again surprised everyone: he was invited to save French Algeria, where one million French lived, and he, on the contrary, taking extremely unpopular and dangerous steps, gave Algeria independence, suppressing the rebellion of the colonists in 1961. “There is nothing strange in that you feel nostalgia for the empire. In the same way, one can regret the softness of the light that the oil lamps once emitted, the former splendor of the sailing fleet, about a charming, but no longer existing opportunity to ride in a carriage. But there is no politics that goes against reality. ” These are the words of a wise statesman who thinks about the country and proceeds from principles. In contrast to politicians who cared only for the upcoming elections, populists by definition and opportunists by vocation. Power for him was not an end in itself, but a means, not of personal well-being, but of the fulfillment of his mission. Politicians most often seek power themselves, they call on state people. De Gaulle was in demand of time and considered himself called. At the same time, despite its ambition and authoritarianism, France was never threatened by de Gaulle the dictator.

Although it was then that he drafted a new French constitution and proclaimed the Fifth Republic, based on strong personal presidential power. And of course, the overwhelming majority of the French chose de Gaulle as the first president of the new republic. He always said that the Fifth Republic is a response to the inability of the “regime of the parties”, the parliamentary republic, to cope with the threats and challenges of the time. France seriously survived the defeat in the war, and de Gaulle with great difficulty managed to return her to the club of great countries.