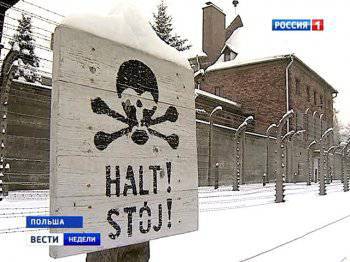 January 27 is the anniversary of the liberation by the Soviet troops of the German concentration camp Auschwitz on the territory of modern Poland. Many camps during the war, including the release of Allied troops, but only for the sake of Auschwitz, the front changed the route. It was a gigantic death factory, where prisoners were burned in kilns and poisoned in gas chambers.


“Suicide here did not make sense, because it was impossible to count on how long it was to live,” writes prisoner Auschwitz, one of the greatest spiritual teachers of the twentieth century, Victor Frankl, who believed that it was the meaning that was the driving force of behavior and personal development. In the concentration camp, Frankl remarked that it was not those with better health that survived, but those with a stronger spirit and who had meaning for which to live. Most often it is love.

During the war, the Nazis sent more than a million people to Auschwitz, most of them Jews, so the day of the liberation of this concentration camp by the Red Army is celebrated as the International Holocaust Remembrance Day.

In the Polish city of Auschwitz, where the museum of the Auschwitz concentration camp is located, a permanent Russian exposition has opened, where you can now go to school from Russia.

Until now, Russians in Auschwitz were frankly few. We did not enter the top ten by the number of tourists from different countries. Why? Perhaps, victory for us is only a figure of losses, a banner over the Reichstag and a printed step of military parades? And it is too difficult to look into the furnace where they burned us. But just looking there, you will appreciate the parade. After touching, from which they saved Europe, in another way you will see the red flag.

So they met - the former prisoner №105-105 and the Soviet company commander Ivan Martynushkin. As part of the 59 Army of the First Ukrainian Front, he liberated Auschwitz.

And the gleam in his eyes, and not to appease emotions, which were not, when 27 January 1945-th Soviet soldiers find themselves in the territory of Auschwitz-Birkenau.
Famous footage of the meeting - setting. Happy prisoners will be captured a little later - immediately rejoice in barely alive people.

“We somehow looked into each other’s eyes. We could smile. They also tried to smile, which didn’t work out very well,” recalls Ivan Martynushkin.
He hurries to the front, and he learns about the scale of this death factory, like all Soviet citizens, from newspapers. Pravda will write how the Germans rush to take special mobile devices to the rear to kill children, how to escape gas chambers with beautiful turrets before fleeing so that they may leave the garages.

The expert commission will indicate the numbers: "Five crematoria with a capacity of 270 thousand corpses per month." And a military officer, the first Soviet commander of Auschwitz, Lieutenant Colonel Elisovetsky, cannot cope with his feelings. He writes to his wife: “My beloved Ninusya, what I have experienced over the past three days is beyond description. These monsters of the human race were forced to burn their victims from among those destined to death. Moreover, they forced the father to burn their children. I am amazed as these people we saw didn't all go crazy. "

Unique materials on the now permanently Russian exposition in Auschwitz. We prepared the exhibition for three years. Declassified many archives.

“We showed the world that the concentration camp and Auschwitz, and not only Auschwitz and Krakow, were freed through battles. There is a widespread opinion that the Red Army almost came to the green light,” says Director of the Museum of the Patriotic War, Vladimir Zabarovsky.

The 14 block, where Soviet prisoners of war were kept. Of the 15 thousands in Auschwitz, 96 will survive. The first experiments with the gas "Cyclone B" the Nazis put it on them. The SS report officer Gerhard Palic in 1941 personally monitors performance. In a gas mask opens the door of the bunker, sees half-dead, requires to fill up a new portion of granules, improves technology.

In addition to the unnatural, ringing silence, even, untouched snow cover affects almost the entire territory of the former Auschwitz-Birkenau, despite the endless flow of tourists, despite the fact that most of the objects can be approached almost closely. But few dare. Still.

Touch now the museum's barbed wire, which was the border of this death camp, calmly inspect the skeletons of furnaces and ruins, which were real gas chambers, or study the device of the barracks, into which people were taken to die, consciously and also absolutely for real.

70 years ago in Europe, an eight-year-old Polish boy, Henrik, promises an exciting trip to Germany to a chocolate factory. Loaded into a wagon for livestock and driven here. He cries because they - the seven thousand liberated at Auschwitz - should not have been lucky at all. In retreating, the fascists hijacked those who were stronger, made a selection. Those who did not pass it, just did not have time to destroy.

All the memories of these children of Auschwitz about liberation are a story about Russians in white camouflage coats and food.

“Hunger, fear and lice. We were always waiting for us to be led to the crematorium. Liberation was a great happiness,” recalls the former prisoner of Auschwitz, Khalina Bzhozovska.

Halina remembers him still. Of course, beautiful and tall. She persuades the girl not to be afraid, she asks them not to leave. But the soldier leaves, swears to the child that he is very busy - he really needs to go to Berlin.

Ctrl Enter
Noticed oshЫbku Highlight text and press. Ctrl + Enter
We are
April 11 celebrates the International Day for the liberation of prisoners of Nazi concentration campsMemorial Day for the victims of fascism
Military Reviewin Yandex News
Military Reviewin Google News
11 comments
Information
Dear reader, to leave comments on the publication, you must sign in.