January 27 - Day of the lifting of the blockade of Leningrad 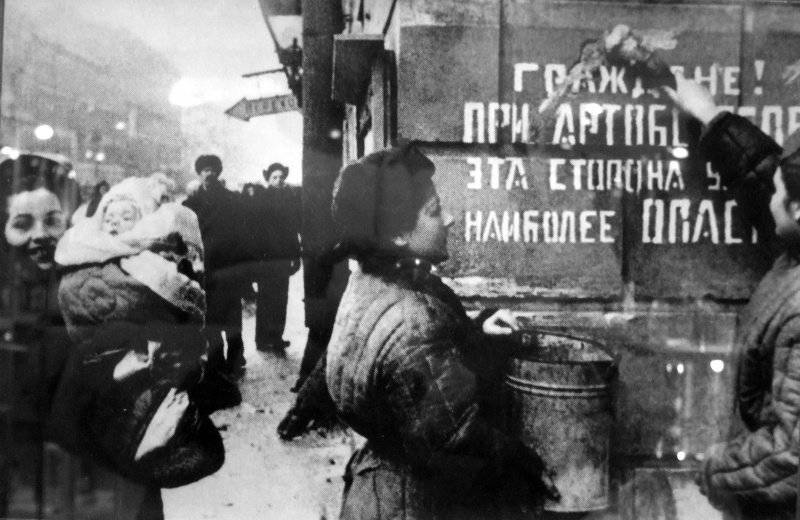 Leningradians paint over the inscription on the wall of the house, warning about the shelling, after the final liberation of the city from the enemy blockade

The plans of the German command capture of Leningrad was one of the most important strategic and ideological tasks, having decided that the Nazis expected to break the will of the multinational Russian people, united by the idea of ​​saving the Fatherland, to further resistance.

10 July 1941, the onset of the fascist hordes began on Leningrad. Exhausting battles lasted for two months, and only 8 September, the Germans were able to block access to the city by land. In the original plans of the Nazi leadership, the city was supposed to be completely destroyed, but the Nazis did not succeed in penetrating Leningrad, the Nazis decided to besiege the northern capital, to take it out of business. The bet was made on the fact that residents and defenders of the city simply die from hunger and cold.

The large bombardment of the city happened on the very first day of the blockades - 8 of September. As a result of the fires, a large number of buildings were destroyed, including the Badayev food warehouses, which contained part of the city’s food supplies.

In the autumn, attacks from the air increased to 3-x-4-x per day. This was done with the aim of causing material damage to the infrastructure of the city, as well as with the intention to cause panic and despair among the population and the fighters of the defending garrison.

Despite the terrible conditions of existence, the inhabitants of the city were in no hurry to leave - they were sure of an imminent victory over the ruthless enemy. In total, two and a half million people remained in Leningrad, of which 400 thousand were children. It was decided to save scarce reserves of provisions, a card system was introduced, the norms for which were constantly decreasing. So, at the beginning of the winter of 1941, a person working in production was supposed to receive 250 grams per day - about half a loaf. Unworkable residents - children and the elderly, as well as people who are not engaged in hard labor, were entitled to half of the worker's norm. On December 25, the size of the rations increased slightly. For workers, the norm has increased by 100 grams, and the rest added 75 grams per day. Leningraders took this step of the central command as a symbol of hope for a speedy release, many took to the streets to share joyful with each other the news. 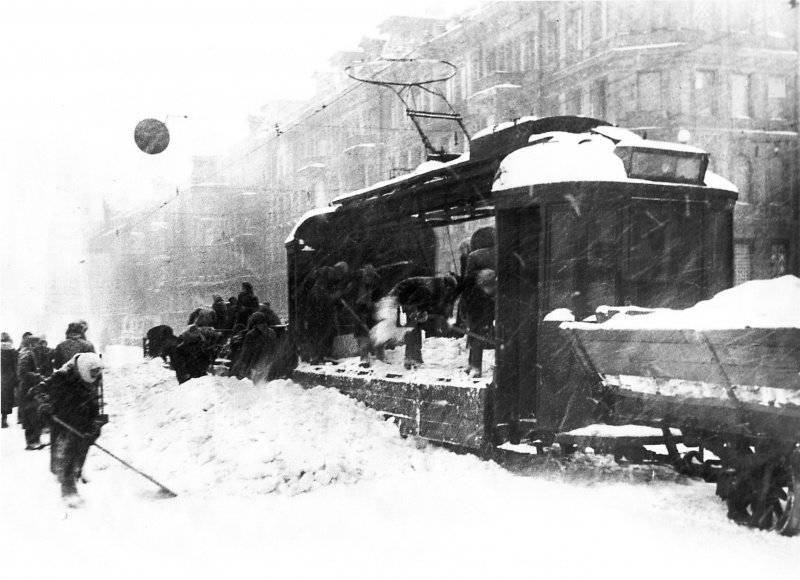 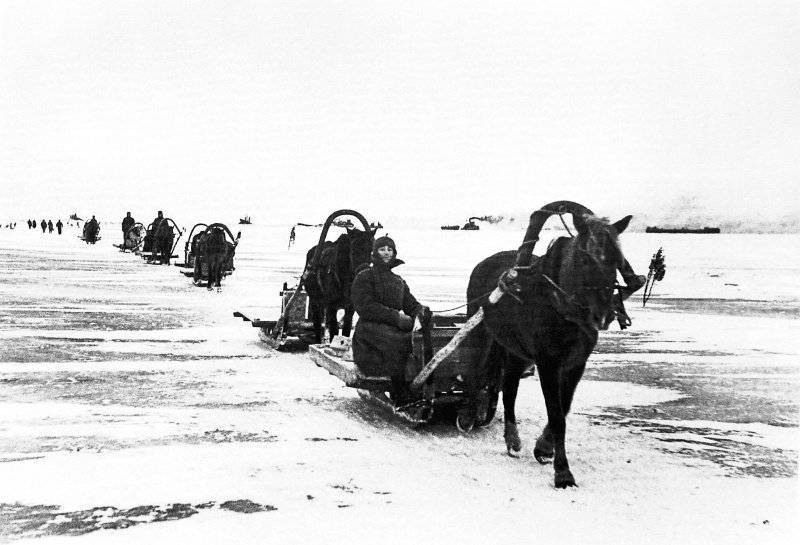 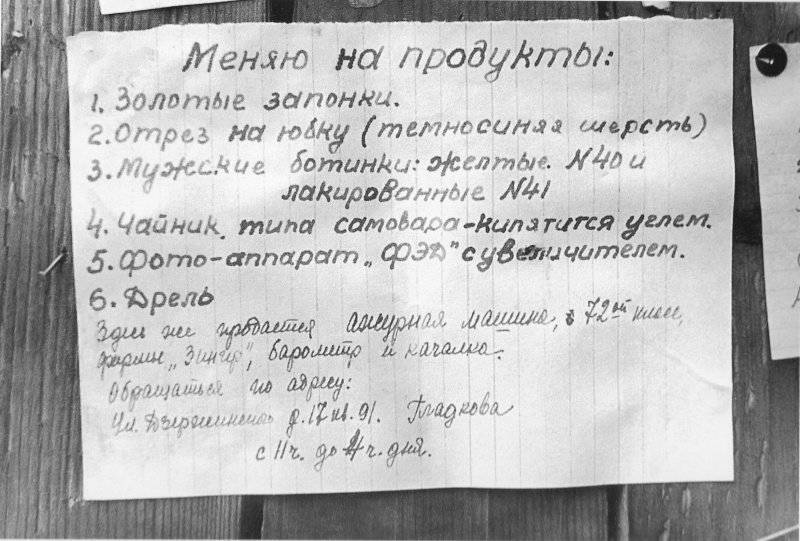 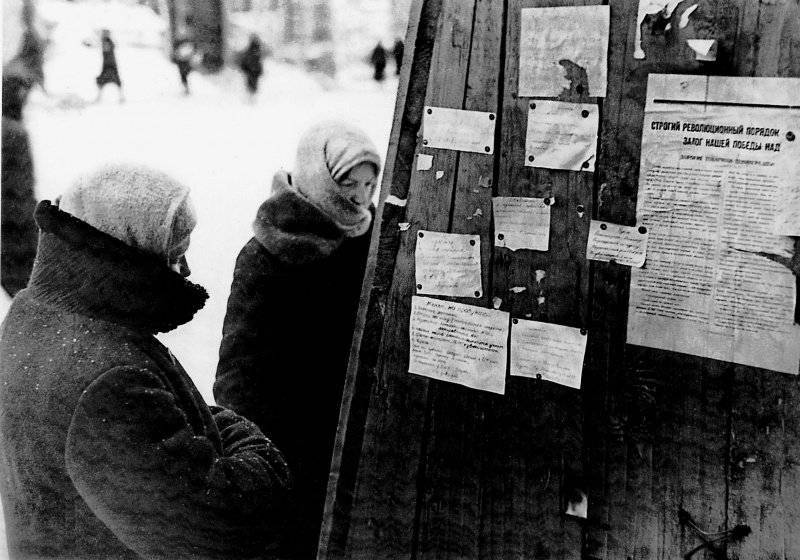 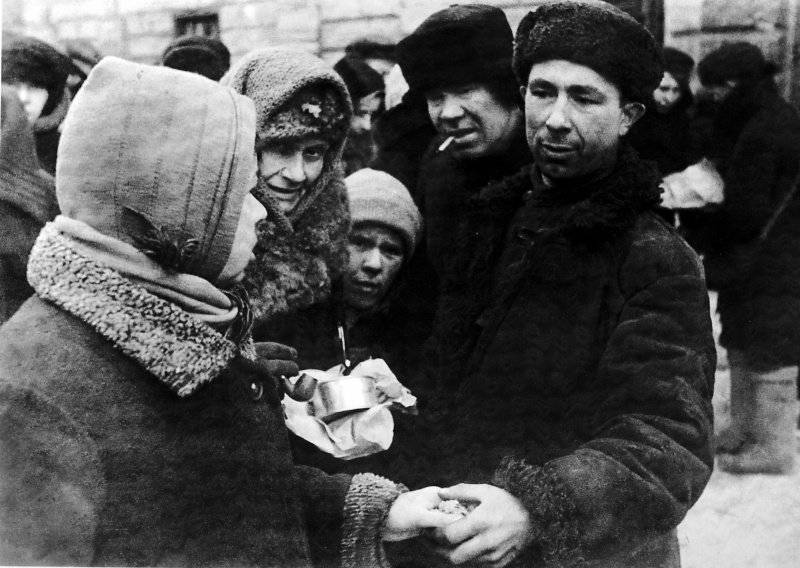 Exchange of goods in the blockade Leningrad market

Late autumn and cold winter became the most difficult time for the residents of Leningrad. The lack of heating and hot water forced people to use furniture and books as firewood. To say that the food was not enough catastrophically - to say nothing. The blockade of hunger and described in the stories themselves blockade, witnesses of those great events. Public transport was immobilized - I had to move around the city on foot. Despite all the difficulties, residents continued to steadfastly perform their work duties. All social institutions received visitors in the usual manner. In theaters, kindergartens, printing houses, free places were occupied by teenagers. Admiration is caused by feats of scientists and scientific employees of the Leningrad zoo. They managed to evacuate more than 80 rare animal species from the city on their own. Those pets that couldn’t be taken out under the blockade and endless shelling were surrounded by the care of the zoo workers. Many people of Leningrad remember the incident with the famous female hippo nicknamed Beauty. A girl caring for her daily brought 40 buckets of water from the Neva to ensure a comfortable existence for this animal. Exhausted zoo workers tried to save their pets from hunger by giving them daily rations of bread.

Deliveries of products were carried out in Ladoga. 22 November 1941 ferry traffic was established on the ice. Began its saving work The Road of Life. Permanent shelling, the risk for cars transporting food to the city could not prevent the Dear task. In the middle of winter, it was possible to begin the evacuation of Leningrad residents. First of all, they saved children, old men and women, then all the rest. However, more than half the population remained in the city. With the onset of spring, the situation in Leningrad improved somewhat - it became warmer, the bread standards were increased.

In the middle of January, 1943, thanks to the efforts of the Leningrad and Volkhov fronts, a blockade was broken. A small corridor with a width of 8-10 km was formed. As a matter of urgency, in 18 days, a railroad was built, along which more than three thousand freight trains passed during the year.

In late February - early March 1943, the Soviet troops attempted to expand the channel over land, but they were unsuccessful. 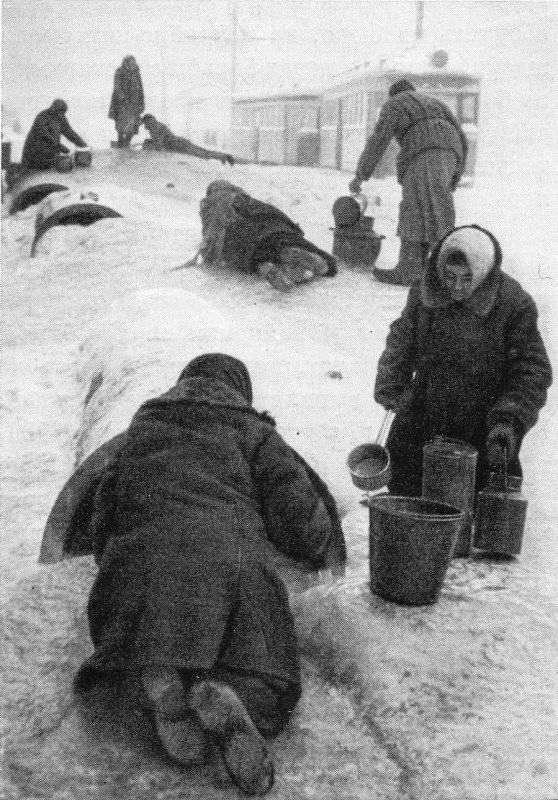 Exhausted people on the road for water 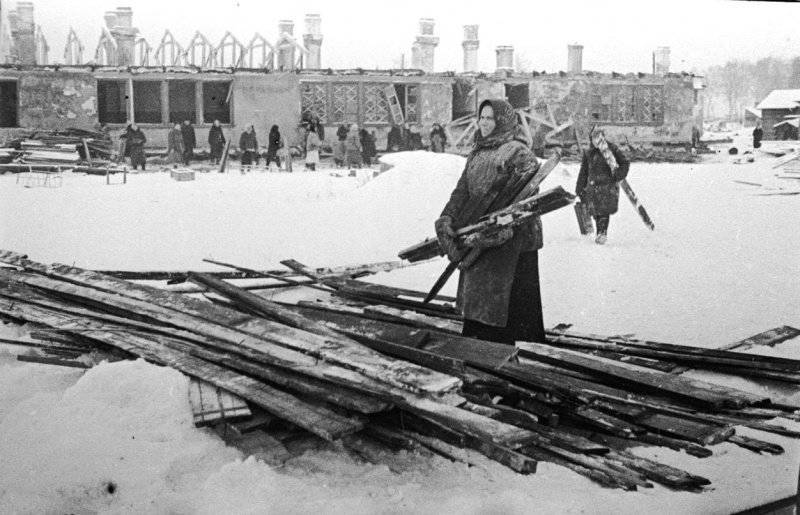 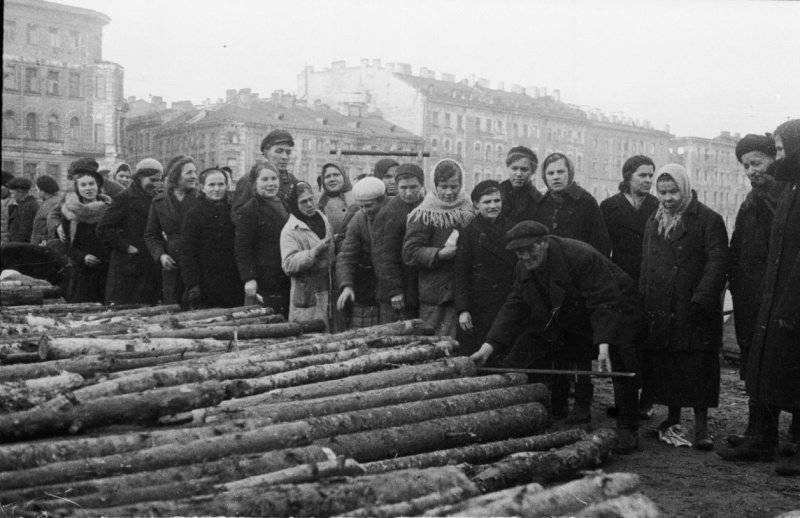 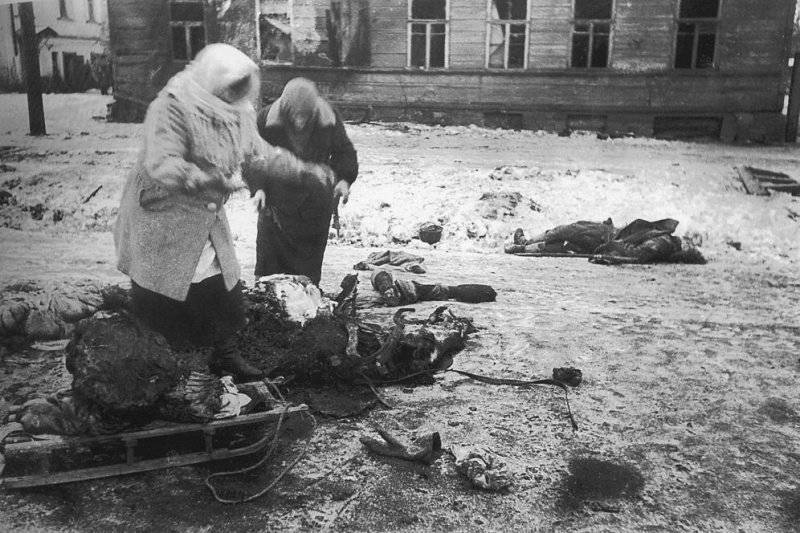 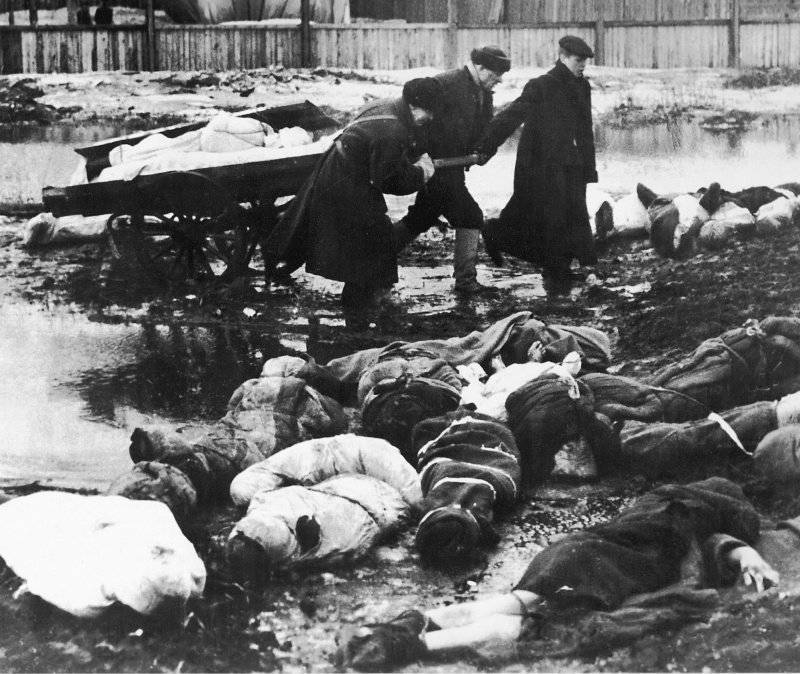 Removal of corpses from the waste ground of the Volkov cemetery. Spring 1942 g 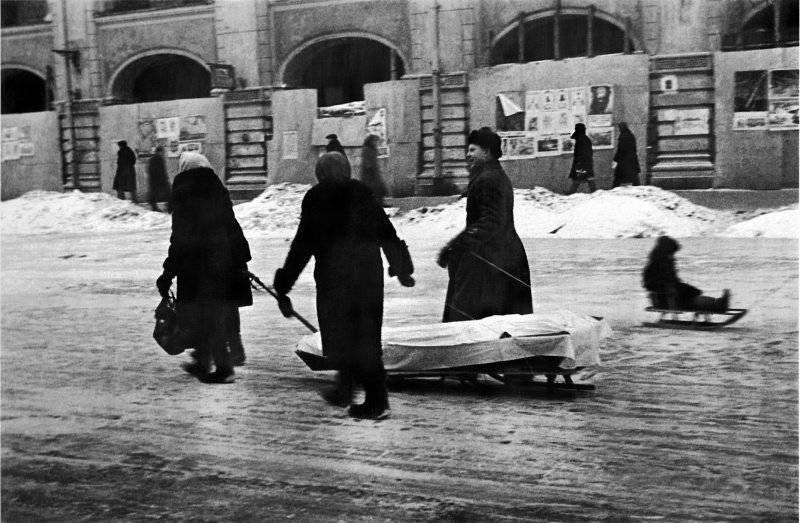 By 1944, the Germans had built a powerful defense around the city. Made of concrete slabs, protected by minefields and rows of barbed wire, created a powerful shield that promised to contain any offensive outburst of the Soviet Army. In response, the Soviet command joined the forces of the Baltic, Volkhov and Leningrad fronts to carry out a decisive offensive. Since January 14, 1944, there have been battles for approaches to the city. The offensive, which began with the Oranienbaum springboard, moved to Ropsha, and on January 15 and to Tsarskoye Selo. By January 20, forces of all fronts united near Ropsha and destroyed a concentration of German troops in Peterhof and Strelna.

A week later, on January 27, the troops of the Leningrad and Volkhov fronts defeated the 18 German army, and the Soviet troops managed to break into the depths of the German defense on 60 km. Being under the constant pressure of the Soviet troops, the German command was forced to undertake an emergency retreat, as a result of which the suburbs of Petersburg — Pushkin, Tsarskoye Selo, Pavlovsk — were also liberated from the occupation.

By the time the blockade of Leningrad lasted 900 days and was remembered as the most severe siege in the world stories. During the blockade died according to various sources, from 300 thousand to 1,5 million people. The defense of Leningrad is one of the key factors that ensured a complete victory over Germany. For three years Leningrad bound around him considerable fascist forces. The victories won in the Battle of Moscow and Stalingrad, the positive outcome of the Battle of Kursk took place largely due to the resilience of Leningraders. 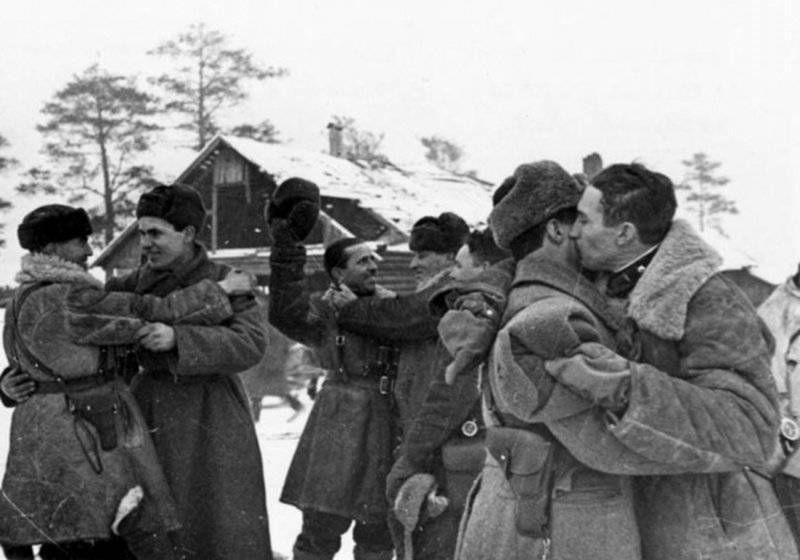 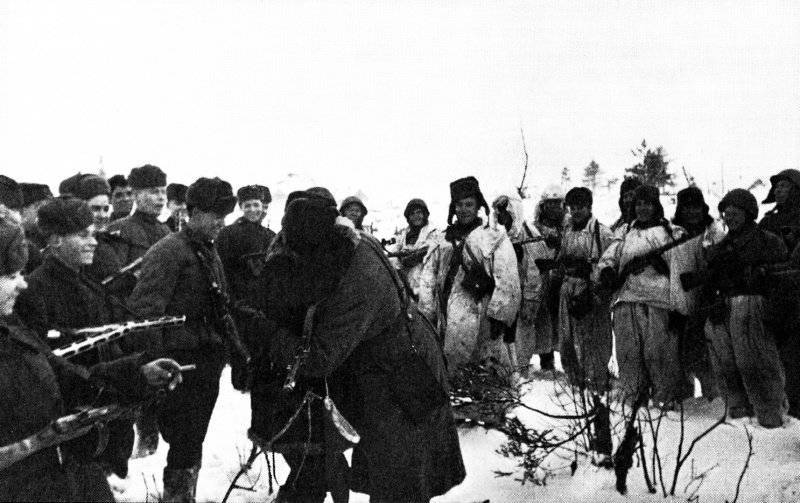 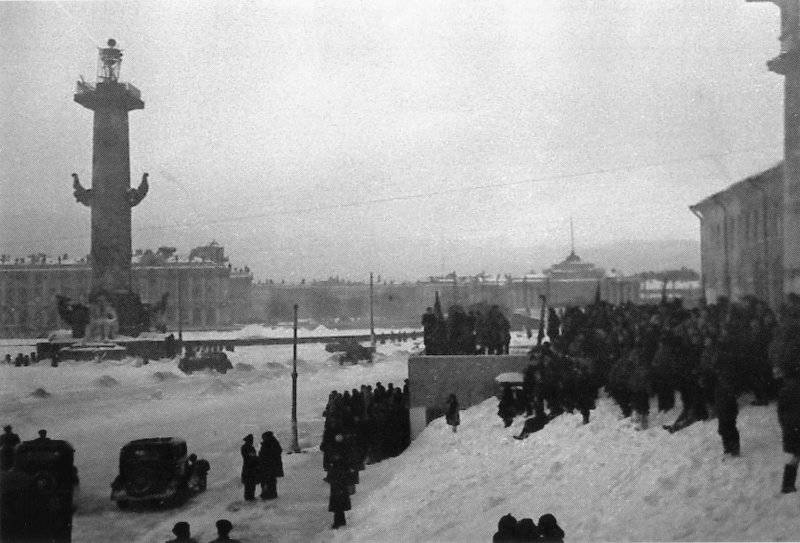 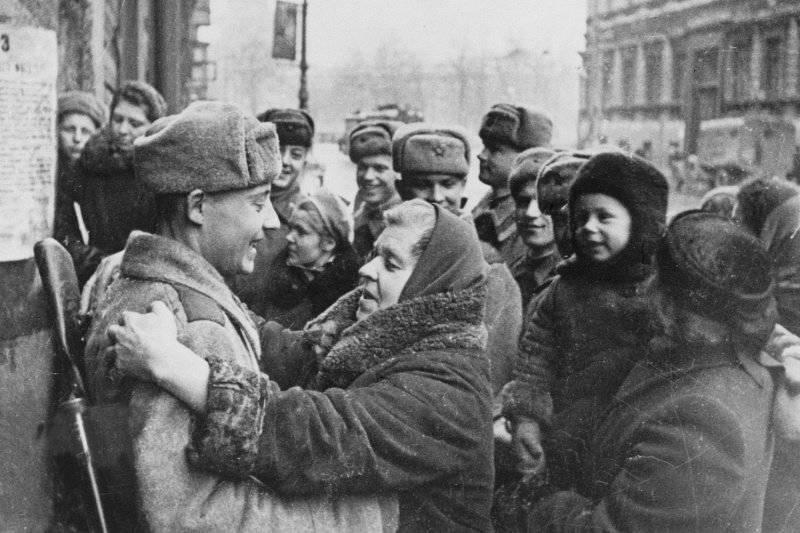 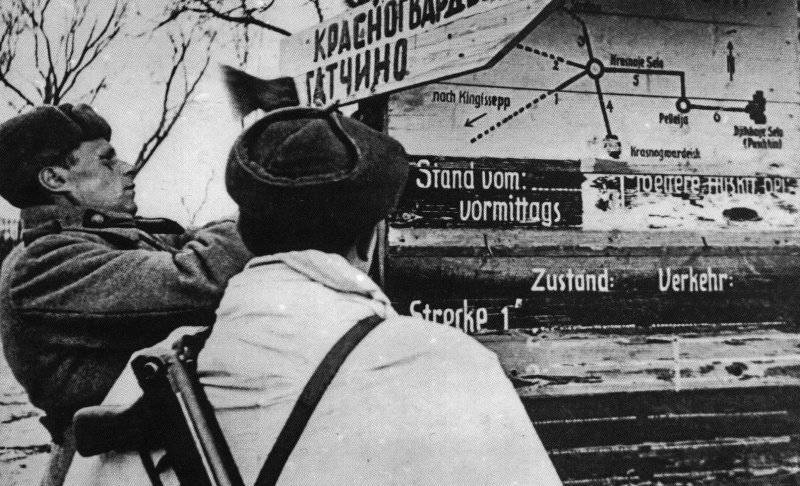 A Soviet soldier nails a road sign in one of the liberated settlements of the Leningrad Region. The photo was taken during the operation on the final lifting of the blockade of Leningrad (Operation “The January Thunder”) 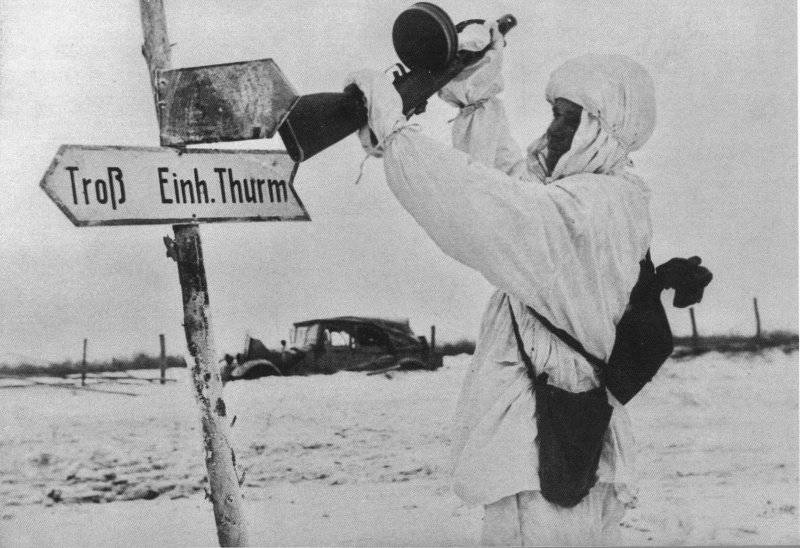 Soviet soldier knocks down a German traffic sign with a butt of a machine gun. The photo was taken during the operation on the final lifting of the blockade of Leningrad (Operation “The January Thunder”) 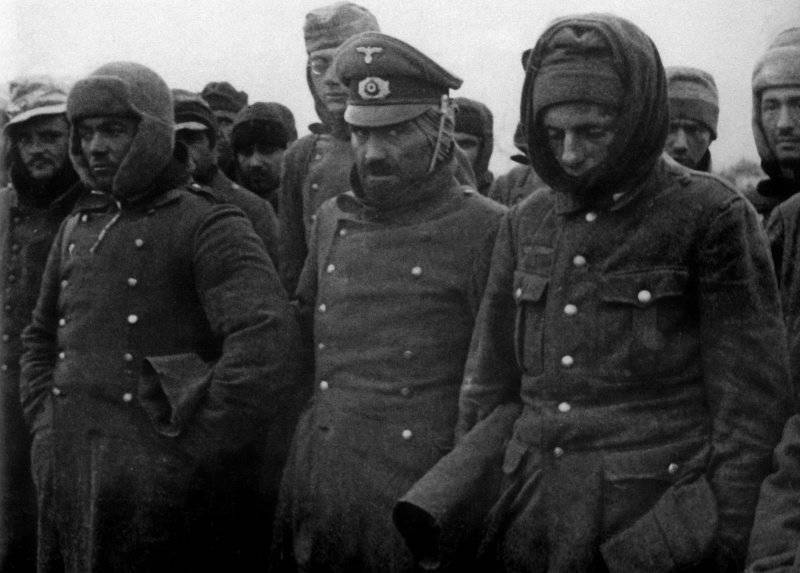 German prisoners soldiers and officers captured during the operation to break the blockade of Leningrad. District village Mga (Kirov district of Leningrad region) 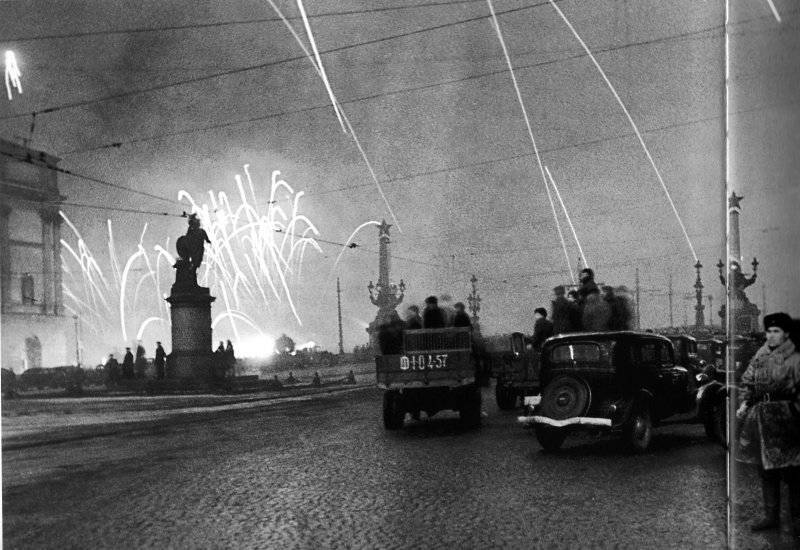 Leningradtsy on Suvorov Square watching fireworks to mark the lifting of the blockade. In the background you can see the lights of the Kirov Bridge (the Trinity Bridge at the present time). On the left side of the photo is a monument to A. V. Suvorov 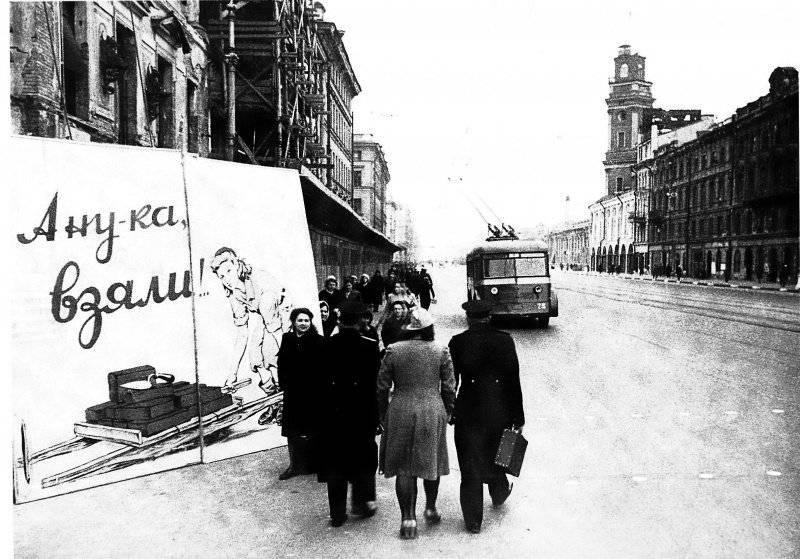