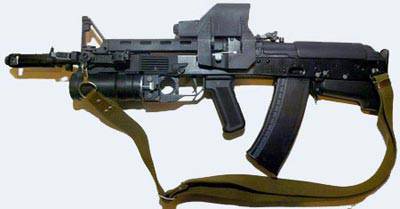 In 2003, the Vepr (Vepr-Rus) machine gun was introduced by the Scientific and Technical Center of Precision Engineering of the National Space Agency of Ukraine.

The machine was created as an upgrade of the AK-74 machine and was made according to the bullpup scheme.

"Vepr" is positioned as a substitute for the Kalashnikov AKM and AK-74 assault rifles in service with the Armed Forces of Ukraine, which have remained since Soviet times.

The Vepr automatic machine consists of the following main parts and mechanisms:
- barrel with receiver, sighting device, butt and trigger mechanism;
- cover the receiver;
- bolt carrier with a gas piston;
- shutter;
- return mechanism;
- gas tube with reloading handle;
- forearm knot with a pistol grip and fuse;
- shop.
The Boar has a common disassembly order identical to the Kalashnikov assault rifle.

The fuse is made by a separate mechanism in the form of a “cross-engine”, similar to that used in the Russian Vepr-308 Super carbine, and is placed above the trigger. This made it possible to significantly reduce the time to turn it off.

The reloading handle and the fuse can be easily rearranged by the shooter to any side convenient for him. In this case, the reloading handle, made by a separate unit, is immobile when fired, which increases safety when handling weapons and allows you to shoot both from the right and from the left shoulder. Changing the design of the reloading handle, made by a separate unit, also made it possible to get rid of the long cut-out under it in the cover of the receiver, which significantly increased the security of the machine from dirt getting inside, contributing to its overall reliability.

It should be noted that the removal of the reloading handle from the bolt carrier had a positive effect on its balancing and also contributed to a certain increase in the accuracy of shooting.

Another feature of the Vepr machine gun is that the elements of holding the weapon - the knot of the forearm and the pistol grip are attached to the receiver without bearing on the barrel. This eliminates its uncontrolled deflection and increases the accuracy of shooting.

The barrel is cantilevered in the insert of the receiver and carries no load. The knot of the forearm and the pistol grip is disconnected from the automaton in one motion - by pushing the stopper lever located on the back of the pistol grip forward-down.

A positive feature of the Vepr machine is the fact that the forearm closes the barrel almost the entire length, protecting it from uneven cooling during side wind, leading to its distortion, and also protects the shooter’s hands from burns. Plastic lining on the receiver cover eliminates the contact of the cheek arrow with the metal and improves the convenience of aiming.

Sight machine dioptric type. His rack - folding, which protects the scope from mechanical damage. The stand is equipped with an adjustment screw that allows you to change the position of the diopter in horizontal direction within 2,5 mm to the right-to-left. Bringing weapons to a normal battle vertically is done by screwing-unscrewing a standard fly from a Kalashnikov assault rifle. In addition to the diopter, there is the possibility of installing any optical sights (including collimator, LCC, etc.) on a special side sight bar. The machine also implemented the possibility of attaching a "tactical" belt to the rear rack of the front sight, similarly to the 16 M.

The design of the butt is a feature of the layout. The stock, as an independent element of the structure, is absent. His role is performed by the back plate, rigidly fixed on the back of the receiver. A positive feature of this design is the increase in the rigidity of the part of the machine applied to the shoulder of the gun and the fact that the bull pap has no butt plate on the butt of the receiver (the latter has a positive effect on the recoil of the weapon). In addition, the upper part of the buttplate pad protects the button of the guide rod of the return mechanism, eliminating its accidental pressing and separation of the receiver cover.

The machine is equipped with a flame arrester - a muzzle brake and a bayonet. Are included in the package of the automatic machine: accessory, belt and cartridge pouch (a case with an accessory and a folding two-level ramrod are worn separately in a cartridge pouch). 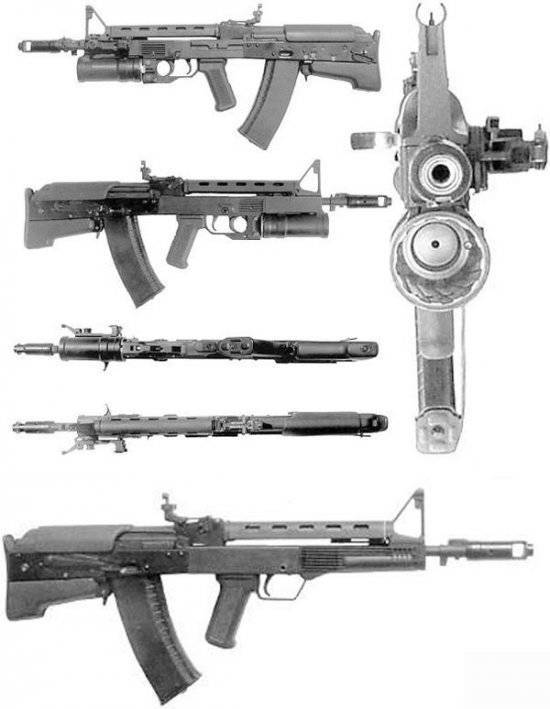 In comparison with the AK-74, the Vepr automatic machine has gained a number of advantages.

The fire control knob is located in front of the store - it is located in the center of gravity, on the pistol principle. The main advantage of this solution is that the fighter holds the machine gun with one hand.
When firing long bursts of "Vepr", unlike the usual Kalashnikov, does not lift up and right, and vibrates parallel to the line of sight, almost without changing the position of the barrel. Due to a much wider butt plate, recoil has become much softer.
“Wild boar” is configured not only for “right-handed”, but also for “left-handed”

According to various sources, in contrast to the Kalashnikov assault rifle, there are fewer details on the 43 in Ukrainian weapons.

As part of the program "Sniper", a new special-purpose sniper rifle "Vepr" was introduced under the caliber 7,62 mm.

On tests, the “Vepr” rifle showed high reliability of the automation, excellent balance of weapons, minimal time to transfer fire along the front and in depth

The sniper rifle "Vepr", at ranges up to 400, showed accuracy and accuracy of combat, almost as good as SVD. At the same time, the price of making weapons turned out to be an order of magnitude lower than that of its Russian “colleague”.

Excerpts from the rationale for testing the use of a rifle "Vepr":
- All samples have a good balance, small size and weight, excellent accuracy and accuracy of fire, compared with weapons developed according to the classical scheme (GIVTS Ministry of Internal Affairs of Ukraine).
- Dimensions of these samples do not interfere with the parachutist and are safe during the landing, which is especially important, since the presented samples of sniper rifles can also be mounted in the usual manner on a parachutist, while the SVD sniper rifle in service is paratrooped in a separate container (airmobile troops of Ukraine ).

- Presented for testing samples of small arms according to the “bullpup” scheme showed high accuracy of shooting and accuracy of the battle; the weapon is small and compact in comparison with the existing models that are in service with special units; These samples of small arms should be used for arming the special forces in the fight against terrorism (the antiterrorist center attached to the Security Service of Ukraine).
- Weapons developed according to the new “bullpup” scheme, possess high accuracy and accuracy of fire, small-sized, conveniently in combat and field position, as well as reliably, therefore it can be used in special forces (OISO UMVD “TITAN”). Caliber,
mm 7.62x39
Length, mm 815
Barrel length mm 590
Weight unloaded, kg 3.30
Capacity store count. 5 cartridges; 10; 30
Rate of fire, rds / min 30
Ctrl Enter
Noticed oshЫbku Highlight text and press. Ctrl + Enter
Military Reviewin Yandex News
Military Reviewin Yandex Zen
6 comments
Ad