January 25 2013
159
From 23 to 27 in January, a prestigious economic forum is held in Davos, which brings together politicians and economists from all over the world to look at how smooth the snow is in the Alps, and in the intervals between the contemplation of wonderful landscapes to chat about financial problems and prospects. In recent years, the Russian official delegation regularly attends the Davos Forum, and is trying to provide a kind of report on what progress has been achieved (if possible, of course) in the last year in Russia. At the same time, one of the most important tasks of the Russian delegates is the task of attracting foreign investors to the Russian Federation. 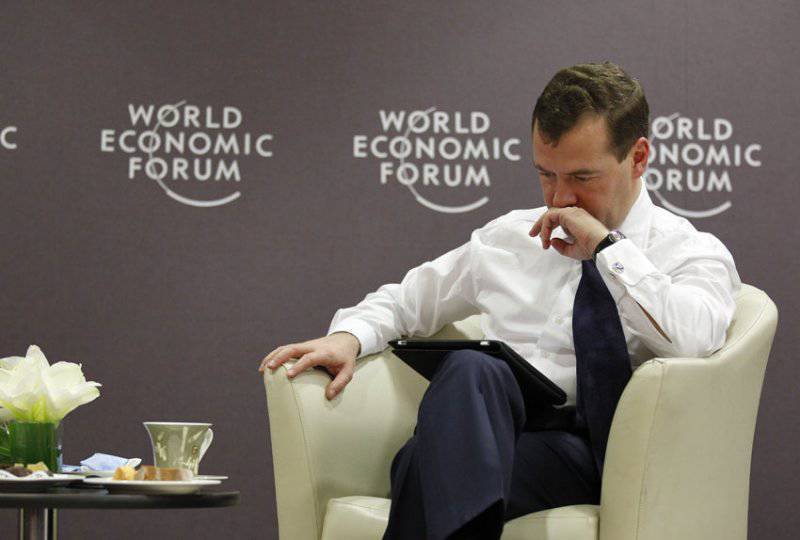 Considerable attention, both from the Russian press and from foreign publications, was riveted on the speech of Dmitry Medvedev and his activities in the framework of the Davos forum. As befits one of the most senior officials, Medvedev in his speech touched on the main achievements of the Russian Federation in recent years. In principle, it would be obviously strange if the prime minister began to talk to those gathered (and, in fact, to the whole world) about Russian problems. These problems and without it are well known to many. Yes, and often much better known than positive changes in the life of Russia. And it is precisely the Russian problems and flaws that are actively exaggerated by a number of certain foreign and domestic publications, which often look very one-sided and give reason to think that someone is trying with all his might to belittle or even close with opaque fabric recent years Russia.

Medvedev decided to show the world community that in Russia things are, in fact, much better than many "well-wishers" try to imagine. 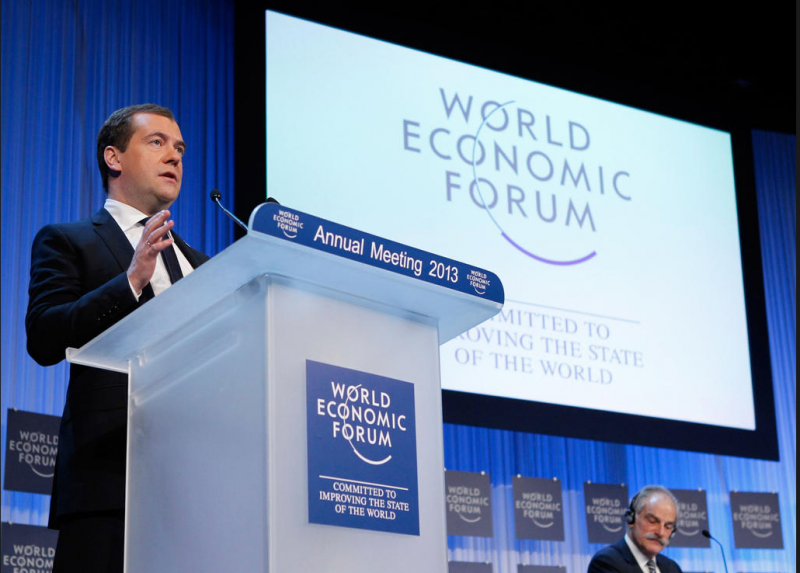 One of the main Russian successes of recent times, the Prime Minister considers the stabilization of the demographic situation in the country. If you believe the official statistics, which is based on data from a number of research agencies, over the past year, Russia has shown an increase in population. Indicators of this increase are still more than modest (slightly more than 4,5 thousand people), but even they show that the population in Russia remains stable. But even 8-10 years ago, foreign, and some Russian forecasters, stated that by the 2014-15 years in Russia there will be about 130 million inhabitants ...

Medvedev actually made it clear to foreign "partners" that the words that Russia is an endangered state, in which it makes no sense to invest and with which it makes no sense to run a business, in fact, have lost all meaning. Speaking about the fact that with demography in Russia, things are much better than a certain stratum of people thinks, Prime Minister Medvedev could well have increased the data on the sad demographic statistics of some European Union states (some Baltic countries, for example). However, Medvedev limited himself to presenting information about the demographic situation exclusively in Russia.

Dmitry Medvedev believes that another achievement of Russia in recent years is the full integration into world markets. As an example, he cites data on Russia's accession to the WTO: accession after 18 years of trampling under the door of the World Trade Organization.

Well, if the situation with the stabilization of the population of Russia (an increase in the birth rate, small, but an increase in the life expectancy of citizens of the country) can be called clearly positive, then joining the WTO raises questions. Calling this step for Russia an immutable good can be a stretch. Until now, criticism of the authorities in this direction has not stopped, and criticism does not always come from opposition politicians and economists. The signing of the document on Russia's accession to the WTO is often criticized by those who are considered to be forces standing on the side of the authorities.

Medvedev, obviously realizing that his words caused an ambiguous reaction, hurried to use his favorite weapon, which can be expressed like the following phrase: joining the WTO will not bring manna from heaven today and now, and therefore you need to tune in to receive benefits in the medium and long term. However, here he seems to be forgetting for some what country he lives in. After all, “receiving benefits in the long run” means only one thing: the Russians are again asked to wait for better times or a “bright” future. With these appeals, all the authorities in our country, without exception, sinned, and therefore the promises of an indispensable onset of a brighter future, and not of the present, managed to fill the most genuine edge with most Russians.

But let's not forget that the forum in Davos is a kind of colorful postcard, which is prepared not for internal use at all. It is designed exclusively for those who represent foreign capital. Apparently, it was them who “reminded” Dmitry Medvedev about the accession of the Russian Federation to the WTO: they say, gentlemen, money bags, if earlier you stated that you were afraid to invest in Russia, because it does not play by the general rules, now what's stopping you? Come and make your money work.

True, in this case, our statesmen could easily turn to our (“homegrown”) money bags, which, apparently, are no less in Russia than in other large economies of the world. And if these “bags” would invest their money in Russian production, Russian education, science, sports, and health care, and not pack money for transferring them to foreign banks, then the Russian economy could well have jerked up without a host of foreign investments ...

Dmitry Medvedev said at the forum that Russia’s achievement also considers the fact that the ruble has turned into a weighty regional currency in the past few years. With all the words of some of Russia's neighbors that, they say, they do not see the necessary stability and a clear basis in the Russian economy, a large percentage of citizens of the same countries actively use Russian rubles as one of the main foreign currencies. Bank exchangers throughout the former Soviet Union use the Russian ruble as one of the main currencies for exchanging besides the dollar and the euro. Even in Georgia, whose president during the years of his rule did everything to sever any positive ties with Russia, the ruble is among the three most popular for currency exchange in the world.

By the way, about Georgia ... It was in Davos that a very significant meeting took place - a meeting of the prime ministers of the two states - Russia and Georgia. Since August 2008, this is the first meeting of officials of the Russian Federation and Georgia of such a high level. World agencies say that Bidzina Ivanishvili himself started a conversation with Dmitry Medvedev. It is surprising that several days before the start of the economic forum, information was received from Georgia that Ivanishvili was not going to hold meetings and conversations with representatives of the delegation at all. However, in reality everything turned out differently.

Obviously, one should not assume that during the short conversation, the Presidents of the governments of Russia and Georgia managed to agree on significant shifts in bilateral relations, but it is still safe to say that the ice was broken ...

After a number of statements by Dmitry Medvedev about what progress Russia has achieved over the past few years, forecasters have again joined in (at least, this is how these people position themselves). Some of the forecasters saw in the speech of the Russian prime minister several contradictions with what Vladimir Putin once said. One of these contradictions was discovered when Medvedev announced the continuation of the privatization of public sector enterprises. Then they began to recall Medvedev and how Putin "outplayed" his decision on the law of libel, that Putin’s position is much tougher than Medvedev’s position as such. And as soon as such contradictions with the position of the president were revealed, materials began to be published in which the authors precisely "know" that Medvedev is waiting for resignation. Both opposition and pro-presidential publications have begun to sin with similar forecasts. Like, Medvedev becomes a bone in Putin's throat ... It becomes, and that's it ...

At the same time, none of the “retired” materials says, and what, in fact, did such a terrible thing happen in the country during the time that good or bad Medvedev represents the Russian Government with his good or bad team? Corruption at the Ministry of Defense? So there, officials filled their pockets (well, at least they are suspected of stuffing their pockets) even before Medvedev came to his current post. Rising prices? And what, unless the pricing policy only the government of Medvedev in our country can not fully control? It seems like with all the prime ministers, and with all the governments, prices were rising ... Maybe only Medvedev began to talk about privatization? Again, there is no: before him state objects were sold to private hands, and this sale was not always at the expense of the country's economy. Maybe the fact is that the government does not provide 5% GDP growth for the year, but gives only 3,6% so far? But for this, too, it does not seem to be dismissed in the current realities.

So maybe a number of political analysts and analysts "set aside" Medvedev simply because someone wanted "fresh blood." They say that Putin will send Medvedev to resign, and the country will even shake himself up - he will get the spectacle ... Well, we have plenty of shows and so on. history It was; downright more than enough ...

And in general, why is Putin now, when the situation in Russia is relatively stable, to dismiss the Government? The President understands that he is “left” today or tomorrow by Medvedev, the opposition will obviously be able to take advantage of this (quite constructive and systemic, let alone non-systemic and even more so), which has been looking for a more or less adequate leader for a long time. And no matter how much they say that Medvedev is today rather weak as an individual politician, but in the case of his resignation, he may have a serious base on which he can rely. Does Putin need it today? Obviously not. Why does the president ruin the system that he has actually built in recent years? So the resignation of the cabinet of ministers in Russia, about which they had been actively spoken about in the media the other day, is clearly a contrived event.

In general, while the Russian delegation continues to conquer the Swiss Alps and lure foreign investors, against this background, everyone is trying to solve their problems. Politics is politics ... It itself has long been one of the sections of big world business. Such a political Davos, it turns out ...

Ctrl Enter
Noticed oshЫbku Highlight text and press. Ctrl + Enter
We are
The forum in Davos turned into a “talker”The head of the DPR visited Gorlovka, the cadets took the oath, and in the "Olympic" hosted the forum "Donetsk Republic"
Military Reviewin Yandex News
Military Reviewin Google News
159 comments
Information
Dear reader, to leave comments on the publication, you must to register.