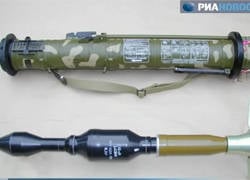 Russian designers have created a new weapon With "intelligence" - reactive multipurpose grenade (RMG). This was reported to the agency RIA News Head of KB-2, Chief Designer of NPP "Bazalt" Vitaly Bazilevich. Analogues of the device in the world does not yet exist.

The special “smart” fuse itself determines how much the explosion time needs to be delayed depending on the thickness, severity and strength of the barrier. At the heart of the RMG are two charges: cumulative and thermobaric.

"The head of the grenade has a cumulative effect, which breaks through a barrier, for example, a concrete wall. The second part of the grenade is of a thermobaric type, flies into the hole and explodes. This affects not only the wall itself, but also the enemy behind it," Vitaly Basilevich.

In addition to the destruction of fortifications, ammunition can also affect lightly armored vehicles of any modifications. Grenade easily overcomes even dynamic armor. With the help of new weapons, targets can be destroyed at a distance from 30 to 600 meters, manufacturers say. According to the designers, the RMG has passed all the necessary tests and from next year it can enter into service with the Russian army.