February 9 2013
65
In the late 70s - early 80s of the XX century, the entire world "democratic" community dreamed under the euphoria of Hollywood Star Wars. At the same time, behind the Iron Curtain, under the cover of the strictest secrecy, the Soviet “evil empire” was slowly and quietly turning Hollywood dreams into reality. Soviet cosmonauts flew into space armed with laser “blaster” pistols, battle stations and space fighters were designed, and Soviet “laser” crawled across Mother Earth Tanks».

One of the organizations involved in the development of combat laser systems, was the NGO Astrophysics. The general director of Astrophysics was Igor Viktorovich Ptitsyn, and the General Designer was Nikolai Dmitrievich Ustinov, the son of that all-powerful member of the Politburo of the Central Committee of the CPSU and, concurrently, the Minister of Defense Dmitry Fedorovich Ustinov. Having such a powerful patron, Astrophysics practically did not experience any problems with resources: financial, material, human. This did not slow down - already in the 1982 year, almost four years after the reorganization of the Central Design Bureau into an NGO and the appointment of N. D. Ustinov, the general designer (before that, he had directed the laser location in the CDB)
SLT 1K11 Stiletto.

The task of the laser complex was to provide countermeasures to optical-electronic observation and control systems. weapons battlefields in harsh climatic and operational conditions imposed on armored vehicles. The design bureau Uraltransmash from Sverdlovsk (now Yekaterinburg), the leading developer of almost all (with rare exceptions) Soviet self-propelled artillery, acted as a co-performer on the chassis theme. 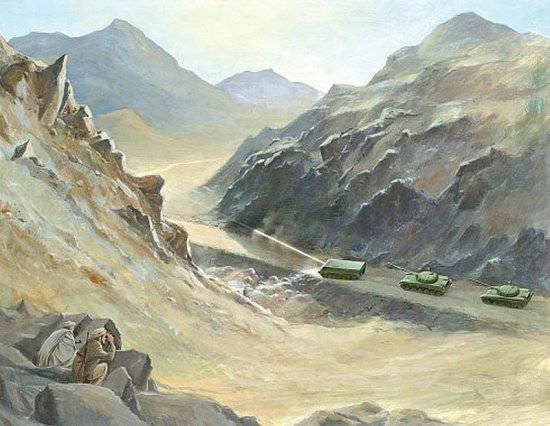 So imagined in the west of the Soviet laser complex. Picture from the magazine “Soviet Military Power”

Under the leadership of Yuri Vasilievich Tomashov, General Designer of Uraltransmash (Gennady Andreyevich Studenok was the factory director then), the laser system was mounted on a well-tested GMZ chassis — the 118 product, which carries its “pedigree” from the chassis of the 123 product (Krug) and the product 105 (SAU SU-100P). On the "Uraltransmash" was made two somewhat different machines. The differences were due to the fact that in the order of experience and experimentation, laser systems were not the same. The combat characteristics of the complex were outstanding at that time, and they currently meet the requirements for conducting military-tactical operations. For the creation of the complex developers were awarded the Lenin and State Prizes.

As mentioned above, the Stiletto complex was put into service, but for a number of reasons it was not mass-produced. Two experimental machines remained in single copies. However, their appearance even in the face of eerie, total Soviet secrecy did not go unnoticed by American intelligence. In the series of drawings depicting the latest models of the Soviet Army, submitted to Congress for "knocking out" additional funds to the US Department of Defense was very recognizable "Stiletto". 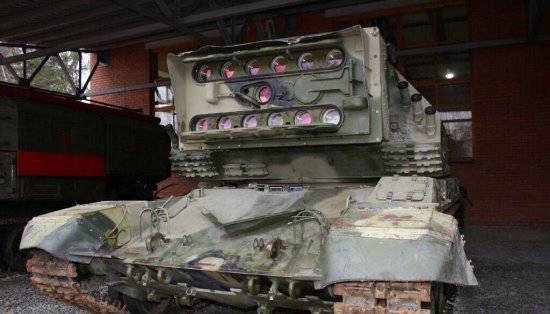 Formally, this complex is in service to this day. However, the fate of experimental machines for a long time was not known. At the end of the tests, they turned out to be virtually useless. The vortex of the collapse of the USSR scattered them in the post-Soviet space and brought to the state of scrap metal. So, one of the cars at the end of the 1990-x - the beginning of the 2000-s was identified by amateur historians of BTT for disposal in the sump of the 61-BTRZ near St. Petersburg. A second, a decade later, also connoisseurs stories BTTs were discovered at a tank repair plant in Kharkov (see http://photofile.ru/users/acselcombat/96472135/). In both cases, the laser systems from the machines were long ago dismantled. The "St. Petersburg" machine remained only the body, the "Kharkov" "cart" is in the best condition. At present, with the consent of the plant management, the efforts of enthusiasts are attempting to preserve it for the purpose of subsequent “museumification”. Unfortunately, the "St. Petersburg" machine, apparently, has been utilized to date: "What we have, we do not store, but having lost weeping ...".

The best share fell to another, no doubt unique apparatus, the joint production of Astrophysics and Uraltrasmash. As the development of the Stilett's ideas, the new 1K17 “Compression” was designed and built. It was a new generation complex with automatic search and pointing a multichannel laser radiation (a solid-state laser based on aluminum oxide Al2O3) on a glare object in which a small part of aluminum atoms was replaced by trivalent chromium ions, or simply a ruby ​​crystal. To create an inverse population, optical pumping is used, that is, the illumination of a ruby ​​crystal with a powerful flash of light. The ruby ​​is shaped into a cylindrical rod, the ends of which are carefully polished, silver-plated, and serve as mirrors for the laser. To illuminate a ruby ​​rod, pulsed xenon gas-discharge flash lamps are used through which high-voltage capacitor batteries are discharged. The flash lamp has the shape of a spiral tube wrapped around a ruby ​​rod. Under the action of a powerful light pulse, an inverse population is created in the ruby ​​rod and, due to the presence of mirrors, lasing is excited, the duration of which is slightly less than the duration of the flash of the pumping lamp. Especially for the "Compression" was grown an artificial crystal weighing about 30 kg - "laser gun" in this sense flew "a pretty penny." New installation required and a lot of energy. Powering generators powered by an autonomous auxiliary power unit (APU) were used to power it. 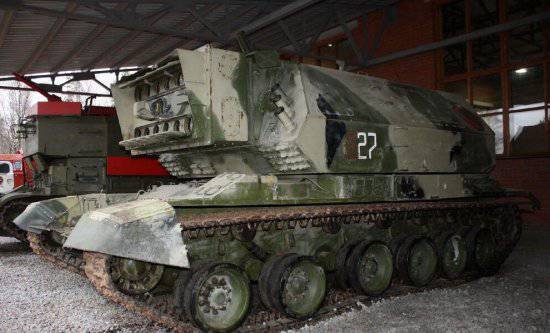 As a base for the complex we used the chassis of the newest at that time self-propelled 2C19 “Msta-S” (product 316). To accommodate a large number of power and electro-optical equipment, the “Msty” cabin was significantly increased in length. In its stern part was placed the APU. In front, instead of the barrel was placed an optical unit that includes 15 lenses. The system of precise lenses and mirrors in marching conditions was closed with protective armor covers. This unit had the ability to hover vertically. In the middle part of the logging were placed the workplaces of operators. For self-defense on the roof was installed anti-aircraft machine gun with 12,7-mm machine gun NSVT.

The car body was assembled at Uraltransmash in December 1990. In 1991, the complex that received the military index 1K17 came to the test and the next year, 1992 was adopted for service. As before, the work on the creation of the “Compression” complex was highly appreciated by the Government of the country: a group of Astrophysics employees and co-contractors were awarded the State Prize. In the field of lasers, we were ahead of the whole world for at least 10 years.

However, this “star” Nikolai Dmitrievich Ustinov rolled. The collapse of the USSR and the fall of the CPSU overthrew former authorities. In a collapsed economy, many defense programs have undergone a major review. The fate of this and “Compression” did not pass - the extreme cost of the complex, despite advanced breakthrough technologies and good results, made the leadership of the Ministry of Defense doubt its effectiveness. The top secret "laser gun" remained unclaimed. The only copy had been hiding behind high fences for a long time, until unexpectedly for everyone in 2010, it turned out to be truly in some miraculous way in the exposition of the Military Technical Museum, which is located in the Moscow village of Ivanovo. We must pay tribute and thank the people who managed to pull out this most valuable exhibit from the neck of perfect secrecy and made this unique machine public — a good example of advanced Soviet science and engineering, to witness our forgotten victories.

Ctrl Enter
Noticed a mistake Highlight text and press. Ctrl + Enter
We are
Program Terra-3 - complex 5Н76Self-propelled laser complexes
65 comments
Information
Dear reader, to leave comments on the publication, you must to register.