Form number eight - what we steal, we wear 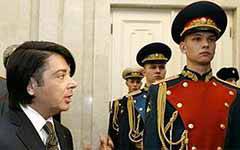 Next year the Russian army will switch to new uniforms - the so-called. “Figure” (field form with special pixel colors). As promised by the military authorities, much better, more practical and reliable than the current one.

“The Price of the Question” is not so small: 5 – 5,5 billion rubles will be needed to completely re-equip personnel, Colonel-General Dmitry Bulgakov, Deputy Defense Minister of Russia, told 17 on November at the 10 anniversary exhibition of Russian Armed Forces that opened in Moscow ".

Needless to say, our troops needed a long time ago. Remembering the Soviet soldier uniform of the 70-80-s sample, it is difficult to get rid of the feeling that it was invented by dead pests. The “camouflage” introduced at the beginning of the 1990's turned out to be more practical, and even decent looking (except for semi-bonded caps), but even in the field it got wet quickly, dried out badly, and was often torn and rubbed. And it is no coincidence that in various hot spots and local wars our guys usually looked ragged. About shoes - generally a separate conversation. Army kirzachi were quite bearable footwear to knead the dirt of the middle zone, but, for example, in mountain conditions they became uniform pads on the soldiers' feet.

19 May 2007, the new Minister of Defense Anatoly Serdyukov said that the army needed a new uniform. It was then that it was decided to “repaint” the everyday form from olive to light gray, remove the breast pockets, and color the ceremonies of the ceremonies in navy blue. The developers were set to combine modern requirements for uniforms with the traditions of the Soviet and Tsarist armies.

Sets of military clothing of the new model underwent a long experimental sock, and only after that she was sent for approval to the president. The only exception is the form for wearing in areas with hot climates: its pilot operation is still ongoing.

In 2009, soldiers and officers for the first time went to a military parade on Red Square in uniforms "from Yudashkin." Even then, the servicemen complained that the sides of the new-form tunics were lowered too low, and almost the entire chest was exposed to the wind. It was decided to change the tailoring of uniforms by raising the sides of the ceremonial tunics. And such adjustments, and not only in the parades, but also in everyday and field uniforms, gathered a lot. The military, in particular, refused to wear button-down shirts, hooks on ties, etc. The dress uniform underwent the greatest changes: there was more gold embroidery on officer's uniforms, the silhouette became more elegant.

Very different from the former and field form. On everyday uniforms, in particular, patch pockets have disappeared. The collar of the “camouflage” was raised higher so that it covered not only the neck, but also the throat. A hood appears on the summer field uniform.

But the fundamental difference between the new military clothing lies not only in external changes. The main thing is that the form has become more functional. For example, a new "vole" and sets of special uniforms, in which servicemen work on military equipment, are impregnated with a compound that gives the form thermal stability.

Some coveralls for convenience and, again, for security purposes, equipped with metal zippers. Most of the elements of the form are made of natural material - wool, cotton, leather, which do not harm their owner during intense physical exertion or external influences.

“Independent Military Review” from 19 of March this year reported that Russian President Dmitry Medvedev approved the transition of the Russian army to new uniforms. The new soldier kit includes 35 garments, officer - 36, general - 37. The cost of each set has increased: soldier - from 11 000 to 26 000 rub., And general - from 100 000 to 300 000. The creation of samples of new military uniforms cost 170 million rubles., Says the publication.

The same edition from 7 February 2010 of the year was abruptly covered by Valentin Yudashkin himself: “What does the couturier here mean? It is very “in business”, if his coat is made of soft hydrophobic leather, astrakhan hats, numerous jackets, mufflers, gloves, gold embroidery and other tzatski in the next three years, the budget will shake out almost a billion dollars. For the creation of only the podium samples, they have already forked 5,5 million of full-fledged American money. So Mr. Yudashkin would explain to me the full value of such an acquisition taking into account our military present and near future. However, last year, at the presentation of samples at the Ministry of Defense, Yudashkin explained that “the new form is modeled so that it is elegant and wants to serve in it”.

Yudashkin himself reacts nervously to such attacks. In an interview with Komsomolskaya Pravda, he said: “I wonder where all this excitement comes from ?! We were at the Ministry of Defense 40 people in the tender. I was pulled out of one, out of the general context, and now here - take the rap! ”

However, other, more objective experts say that the form, which the head of state approved, can hardly be called Yudashkinsky. First, more than 40 organizations participated in its development. Secondly, for the year that military clothing was tested in the army, dozens of changes were made to it. “We should not forget that a large team worked on a set of new uniforms,” recalled and. about. Leonid Shcherbatsevich, Chairman of the Scientific and Technical Committee of the Central Marantry Department of the Ministry of Defense. True, in agreement with Valentin Yudashkin, all changes in military clothing were coordinated with him. He was told why one or another element is not satisfied, and what adjustments need to be made. He agreed with all the proposals. Some still claim that the uniforms “from Yudashkin” are three times more expensive than the previous ones. A number of details of the new dress uniform is of import origin. The very same fashion designer explains the high prices "using advanced technologies and the latest materials."

But in his speech on November 17, Colonel-General Bulkagov categorically denied rumors about the excessive cost of the new form. Moreover, he refuted even the statement that the transition to a new military uniform would cost the state budget 25 billion rubles. “I have been explaining for three years now: this amount, 25 billion rubles, is unknown where it comes from and what it adds up to. The armed forces are switching to a new uniform for three years, and there is no talk of any 25 billion, said the general. - We change our army for three years, because the uniforms, inventory items and personal belongings of military personnel have a certain service life. Both the presidential decree and the government decree state that we are planning to switch to a new uniform, taking into account the period of wearing of those items that the servicemen have. ” "Thus, the transition of the army to a new form of clothing will require 5, maximum - 5,5 billion rubles," insisted Bulgakov.

Recall that the figure of 25 billion was announced a week ago by the Chairman of the Federation Council Committee on Defense and Security Viktor Ozerov. “For three years, the army and fleet will switch to a new uniform, including military servicemen and cadets of military educational institutions, ”said Ozerov and promised that these funds would be allocated from the federal budget. Moreover, from his words it even followed that 2011 billion rubles were allocated for 12,2348, 2012 billion rubles for 12,2329, and 2013 billion rubles for 13,2308.

Bulgakov, moreover, confirmed that from 2012 of the year it is planned to change the procedure for providing servicemen undergoing military service under the contract with items of military uniform for personal use. In this case, university graduates, as well as soldiers and sergeants at the conclusion of the first contract will be provided with a full set of military uniforms. In the future, soldiers and officers will receive not the form itself, but funds for its purchase. Every year, military personnel will receive 20-25 thousand rubles for these purposes. and more depending on the category of military service.

In principle, everything looks quite logical, but the same “Independent Military Review” reminds of how General Bulgakov said last July that the price of a military uniform increased for generals from 104 000 to 295 000 rubles, and for soldiers from 11 000 to 26 000 rub. “As for the officer’s uniform, it can be said that it is nevertheless closer in price to the general’s, rather than to the soldier’s. And, compensating for 20-25 thousand rubles. a year, the Ministry of Defense will save billions, ”concludes the publication.

“In order to avoid abuses, military personnel will be able to buy military uniforms upon presentation of a certificate. I would like to add: if it is on sale. Now military units are announcing tenders for tailoring the required number of sets, and the same rear service orders tens of thousands of sets. And who will sew the form for sale, what sizes, in what quantities and at what price? What merchants will do this? And who will place the state defense order on modern fabrics and accessories, then to sew a uniform out of them? Do not forget that in addition to summer there is also a winter uniform, which will be more expensive. The full officer kit is 36 items. If any of them no one will undertake to produce, there will be a shortage. For rent, after a while, the whole army, following contract soldiers, will wear average camouflage instead of a new uniform.

The Russian army partly returns to the times of feudalism, when the nobles went to military service with their horse, saber and pistols. And the military uniform "built" themselves, getting "clothes" from the treasury. Therefore, in the works of Russian classics there are so many officers from small landowners in darned and worn army coats, ”the NVO lists its fears.