Robot Soldiers: Reality or Fantasy of Scientists and Military?

January 18 2013
19
Laboratory HRED, which is located in the United States, is developing a special filling for combat robots. This stuffing, which has already been dubbed the brains of a robot, will work so that the robot can execute commands given by votes during combat operations.

It is obvious that today the use of robots as a specific military equipment is gaining momentum. With their help, you can perform a variety of operations and perform diverse tasks: from the protection of sites to the destruction of armored vehicles and air defense units. In addition, the use of robotic UAVs, which are called drones. 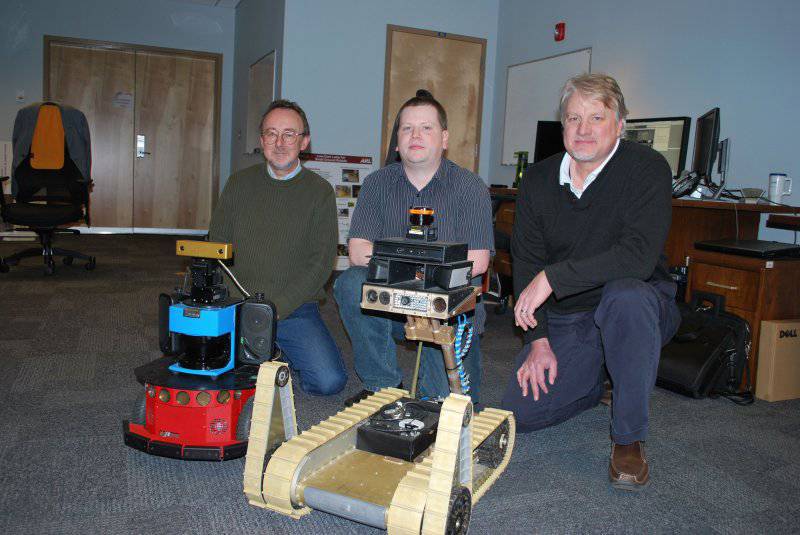 But so far there is a significant technological disadvantage, which does not allow robotized military systems to be called robots in the full sense of the word. Most of them require an operator command. And if in terms of air vehicles, the situation is more or less tolerable, then for ground-based 100 technology, robotization is only in the dreams of the developers and the military themselves.

To develop systems that are called unmanned, it was decided to use a special set that includes the basic fundamentals of "soldier's intellect." In other words, combat vehicles must “learn” to move independently on the ground, communicate with other similar devices, as well as perceive the voice commands of people and execute these commands. If it is possible to create such a system, then it can already be considered a great achievement in the field of military robotics.

But for all the seeming ease of creating such problems of robots too much. HRED laboratory specialists have been working with the university in Towson since 2004. They are developing the SS-RICS system, which combines a series of special knowledge of a symbolic and sub-character character for acceptable robot control. This system has a cognitive architectural framework that was developed at the University of Michigan.

HRED experts decided that it is necessary to improve work in terms of using new ideas in the field of information computer technologies. One of these areas was chosen to work on digitizing commands that the human brain is capable of giving to the internal organs. These commands are planned to be used for the operation of the robot. But the question is how this experience will be positive.

Initially, the developers decided to develop work towards the use of so-called long-term memory and perception. If these parameters can be implemented for the machine, then it will have the possibility of intellectual behavior.

Based on special algorithms, it is planned to “train” the robot for elementary cognitive processes. He must “understand” what to do in a given situation and how to do it as effectively as possible. Scientists give an example of how a person opens a package of milk. During this seemingly elementary process, a large number of operations have to be performed. The person examines the box, realizes that somewhere there should be a poison line, then the brain sends a command to the hands so that they begin to open the box along the line. If the box does not open, then you need to use additional tools, such as a knife. In general, this is an algorithm that could be implemented for the operation of a robotic system.

At the same time, HRED specialists are not going to load the robot's memory with a set of separate algorithms. They want to develop a universal algorithm that would allow the robot to find the optimal solution on its own, scrolling through a large number of possible options. This is a classic example of using artificial intelligence.

However, we must not forget that the human brain and any processor of the machine are the essence of different things. A person can easily distinguish a door from a window, but what the robot needs to do for this: rectangles both there and there, and the handles that open them there. In general, it’s simply impossible to build a memory for a robot.

However, it is possible to make the robot, like a person, know the world around. Experts say that it can be “driven out” through certain premises, where he will have to remember the differences of the same door from the window, for example. If the robot receives this data itself, then it will be easier for him to act on their basis. This will help reduce the load on the computer center of the robot and save you from the possible loss of time to find the right solution.

One of the possibilities of perception, which can be realized on the example of a robot, in HRED is color. The robot could process color commands that would indicate coded tasks from the command point.

If it turns out to be translated into reality, then humankind is waiting for this real “robocop”.

We are in Yandex Zen
The next wave: race to the wars of robots
I fight for the electric body! Ground mobile robots on today's and tomorrow's battlefield. US Technology Overview
Military Reviewin Yandex News
Read Military Reviewin Google News
19 comments
Information
Dear reader, to leave comments on the publication, you must to register.