The path from the victim to the hunter 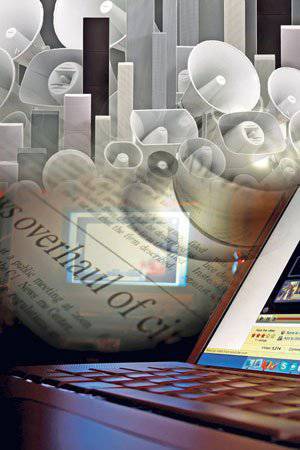 In Western countries, primarily in the United States, an effective information warfare system has been established at the state level. The total nature of the means and time of application of this doctrine allows the ruling elite of the West to solve the key problems of geopolitics without the use of armed forces or with their limited use. In the rest of the world such a system has not been created.

The result of the information impact is mainly manifested indirectly, through a decrease in the effectiveness of the actions of the opposing side, or even with the transfer of part of its forces and means to actions that directly damage its state.

An important aspect of the information war is the dependence of its effectiveness on the accuracy of matching a large number of relatively weak in terms of impacts. This defines, as a key task, the coordination of a large number of diverse forces and facilities operating in completely different ways. Therefore, the role of planning and organization in the information war is significantly higher than in the traditional armed confrontation.

A distinctive feature of the information war is the complexity of the impact, when a multitude of sometimes formally loosely coupled methods of influencing the enemy are used to solve one task.

The effectiveness of the information war depends to a decisive extent on the diversity of the forces and means employed for its conduct.

Therefore, all the main state structures and non-state entities should be involved in its management:

1. Official diplomatic bodies of the state, which in the framework of information warfare solve their inherent tasks of political, legal and diplomatic support of its conduct.

2. International non-governmental organizations, the main purpose of which in the framework of information warfare is the formation of a favorable international moral and psychological background for the activities of the state, as well as the implementation of certain information campaigns.

3. State and non-state bodies and the media as the main tool of psychological impact on the population and the leadership of other states, ensuring stability within the country.

4. Political parties and movements, Christian churches and Islamic religious structures, state and non-state organizations and cultural institutions, which are the main consolidating force of the people within the country and the most important factor of external ideological, religious and cultural expansion.

5. Scientific state and non-state institutions, organizations and societies that remain the most important component of maintaining a favorable information environment within the country and a major factor in external scientific, technological and cultural expansion.

6. State infrastructure (energy, transport and communications), fuel and energy and raw materials complex of the country, industry as the main levers of the implementation of information shares by economic methods.

7. State bodies and structures that ensure the military, political, and internal security of the state, such as various special services, the Armed Forces, and non-state militias, which remain the main force instrument for conducting information wars.

Information warfare involves the use of a wide range of impacts. In fact, any impact of a material or informational nature should be considered as a method of changing the state of the information environment of an adversary or his system.

The possibility of applying these or other methods is determined by the conditions of the situation. Thus, actions in the ideological, religious, informational, scientific, cultural, and diplomatic fields can be carried out continuously, regardless of the state of relations with other states.

Methods of economic pressure, as a rule, can be used when diplomatic and informational methods have shown their inefficiency. Their application is carried out with sufficient information, psychological and diplomatic support.

The actions of state security structures, both within its borders and beyond, within the framework of special actions, can be carried out continuously and in close coordination with actions in ideological, religious, informational, and diplomatic spheres. Mainly against the geopolitical opponents of the state.

The Armed Forces are used in waging information wars, mainly to solve the problems of "demonstrating force."

The activities of these structures vary significantly in impact mechanisms and results obtained. At the same time, informational results (the effectiveness of participation in informational confrontation) strongly depend on each other. This determines the need to closely link the actions of such diverse structures with a single plan and plan.

At the same time, the forces and means involved in waging an information war in their absolute majority should not be aware of the fact of their participation. This places extremely high secrecy requirements on the planning and organization of information warfare.

On the front line

Today, an information war is being waged against Russia. This is recognized by almost everyone. It was thanks to the effective use of information warfare methods that the collapse of the USSR and the restoration of capitalism in our country became possible.

As the global crisis worsens, external pressure on Russia will increase, especially from the West, primarily from the United States. The main tool of such pressure will be the methods of information warfare. Their effective application can lead to a decrease or even loss of national sovereignty by our Homeland, and possibly to its disintegration into several quasi-independent states.

Under these conditions, effective counteraction against informational aggression is a key condition for Russia to maintain its statehood.

Unfortunately, analysis of the information sphere in Russia shows that for the time being we cannot effectively neutralize information pressure. This, apparently, is determined by our lack of effective state tools for conducting informational confrontation. If they are, their activity is obviously ineffective.

To effectively counter informational aggression, we at least need to have:

2. An effective concept of information warfare.

These are the main components of the military information potential of the state. Their formation should be based on a detailed theory of information warfare.

It is advisable to build the work on the formation of military information potential in Russia in three main stages.

At the second stage, it is necessary to form the basic elements of the information warfare system, first of all its control system, and also to select and train personnel. At the same time, special attention should be paid to the creation and development of a central governing body.

At the third stage, practical testing of the functioning of the entire system should be carried out.

After that, practical actions can be initiated to solve specific strategic tasks. The implementation of these measures will significantly increase the stability of Russia, its protection from informational aggression.

Ctrl Enter
Noticed oshЫbku Highlight text and press. Ctrl + Enter
We are
Military reform as an integral part of the security concept of the Russian Federation: Systematic dynamic assessment"On the Doctrine of the Information Confrontation of Russia"
Military Reviewin Yandex News
Military Reviewin Google News
40 comments
Information
Dear reader, to leave comments on the publication, you must sign in.