And again about footcloths: the new minister is against

January 16 2013
170
The main news of the last days, connected with the Russian armed forces, became the next plans of the Ministry of Defense in respect of uniforms. On January 14, Minister S. Shoigu announced that by the end of the current 2013, a piece of clothing called footcloth will go to history, and the army will move to more modern and perfect "clothes" for the soldiers' legs. At first glance, new messages regarding the form and related things have already become familiar and expected. But for a number of reasons, the dispute over the expediency and necessity of just footcloths over the past years is one of the main topics discussed at various levels. In the current “confrontation”, supporters of the footwomen and socks lovers have a sufficient number of arguments and therefore do not rush to recognize their point of view as erroneous. 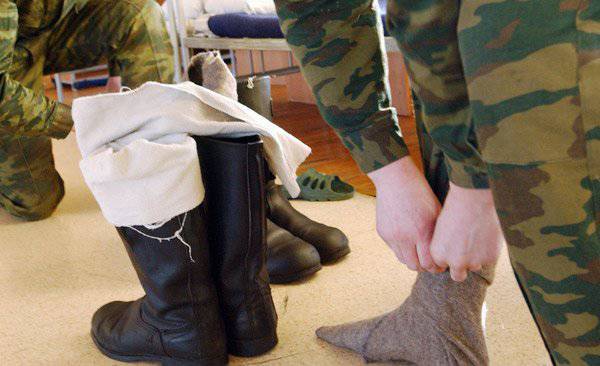 Within just a few hours after the Minister’s statements, a mass of comments of one kind or another appeared. Some officials, experts and representatives of the general public support the “decommissioning” of women’s footwear, the other part doubts that this can be done in the foreseeable future, and a third group who commented on such actions against such actions. In general, such opinions were expected. The fact is that over the past few years, attempts have been made to transfer the army to new shoes and related uniforms. However, for a number of reasons, changing boots and footwear for shoes and socks, firstly, did not reach the desired volumes, and secondly, did not bring the desired effect.

Thus, in the hands of supporters of the traditional approach to uniforms, involving the winding of footcloths, there was another argument against change. In addition, in practice, often there is an unpleasant situation caused by the "incompatibility" of socks and boots. Due to a number of characteristic features of the latest socks, even the so-called. tracking, can quickly break, which does not contribute to the convenience of wearing, especially in military conditions. As a result, the refusal of footcloths should lead to the removal of circulation and boots.

It is noteworthy that the boots and footcloths were excluded from the list of permanent elements of the uniform of military personnel several years ago. However, this exception in fact was only bureaucratic. For a variety of reasons, these elements of uniforms are preserved and are still used. At the same time, the activity of their use is constantly decreasing. The defense budgets of recent years provided for additional costs for the transition of the army to new shoes and socks. Thus, the recent statements by the Minister of Defense do not seem to promise a total ban on the old elements of uniforms, but they set a specific time frame, which should be taken into account when completing the long-term work of the supply services for the transition from footcloths to socks.

Perhaps the main problem in the situation with the abandonment of boots and footwear is the financial aspect of the case. Due to the size of the armed forces personnel, the purchase of a new form element, even with its low price, ultimately leaves the state in fairly large expenses. In particular, this is why the withdrawal of the footcloths began not today or yesterday. An additional problem of financial and supply character is the presence in the warehouses of the armed forces of just a huge amount of shoes already produced. At the start of the “shoe conversion”, the total number of boots in warehouses was estimated at 2,8-3 million pairs. After the cessation of purchases of new shoes, over the past five to six years, the soldiers did not manage to demolish even half of these stocks. So it turns out that after giving up a pair of footcloth-boots, a considerable amount of old army shoes will be useless to anyone, and the financial costs of previous years for its purchase will be in vain.

To overcome the financial difficulties of transition to new elements of uniforms offered in the easiest way. According to Minister Shoigu, additional funds will be allocated to complete the transition. Judging by the required volumes of deliveries, the period of complete abandonment of boots and footwear in practice can move significantly. However, the leadership of the Ministry of Defense seems determined to be determined and will do everything possible to get rid of the traditional but claiming footcloths as soon as possible.

Regardless of the actual timing of the full transition to socks and shoes, the debate about the feasibility of this decision will continue. Consider the arguments of both sides. Perhaps the most controversial evidence of the need for footcloths and boots are fabrications about traditions. Of course, the last two centuries, the Russian, Soviet, and again the Russian army used only such items of clothing, but economic reasons were the main reason for this. Two pieces of fabric cost much less than a pair of knitted items. At the same time, the vitality of this item of clothing is due to several positive qualities. For example, washing and drying footcloths is much easier than similar procedures for socks. In addition, there is the possibility of simultaneous washing a large number of footcloths without the subsequent need for any additional sorting apart from division into pairs.

Thanks to the uniform form of footcloths, all military personnel are suitable for use, regardless of their foot size. Also, simple pieces of fabric allow the fighter to wear larger shoes without any problems: with proper winding, all gaps are occupied by a footcloth. Finally, the manufacture of footcloths is an extremely simple process: an existing cut of suitable fabric is taken and cut into pieces of the same size. It does not require any sewing accessories: footcloth is traditionally done without seams and overlapping edges, which additionally protects the foot from possible injuries.

However, the traditional army footcloth is not without flaws. First of all, this is the complexity of “putting on”. Unlike a sock, footcloth is tied in a special way, and then suitable for use. This process takes a little more time than putting on socks, and at the same time requires special treatment. So, when the winding on the footcloth is not tight enough, folds can form, which can later lead to chafing and other unpleasant injuries. In addition, there is a method of quickly shoeing boots with footclothes, called "envelope". It takes much less time, but you have to pay for such a gain with convenience and consequences: because of a different arrangement of the fabric inside the boot, you don’t have much time to do so. Finally, in certain cases, there may be problems with wearing footwear and shoes, which also does not add to the soldier’s comfort and does not contribute to an increase in combat effectiveness.

It seems that several years ago, after weighing all the advantages and disadvantages of both “leg outfits” options, the Russian military came to the conclusion that there are great prospects for the shoe-toes option. Well, judging by the last words of the minister, this time the case will be brought to an end. In this case, it is worth considering the possible problems of completing the transition, as well as issues that will arise before the Ministry of Defense after the complete abandonment of footclothes and boots. Both before and after the completion of all these activities the quality of shoes and socks will be the main problem. The armed forces, being a large and numerous formation with demands for uniformity of form, should be ready to pay a considerable sum of re-training. Even with mass production, significantly reducing costs, the cost of a pair of decent shoes will not be lower than the price of a pair of boots. In addition, it is necessary to consider a financial policy regarding socks. Like any textile product, socks wear out, break and become unusable.

Thus, it is necessary to develop an approach to the replacement of these items of clothing. The most efficient and financially optimal approach is when the army purchases decent tracking socks with a corresponding service life. Depending on the material and manufacturer of a pair of such socks can cost from 70-80 rubles and above. This is much more expensive than the footcloths, but there will be no problems with the “compatibility” of socks and shoes. In addition, high-quality socks should not be some kind of accountable subject, which is supposed to be issued for a certain period without regard to wear, but, if I may say so, consumable so that the soldier does not need to constantly repair socks while waiting for the issuance of a new pair. Of course, with all the convenience of such an approach to security will be much more expensive than the existing one. But at the same time there will be an obvious benefit in the form of wearing comfort. Naturally, subject to the correct execution of all relevant instructions.

It is easy to see that the most convenient way to put socks into circulation will entail significant changes in the structure of supply services. It will be necessary to rebuild some mechanisms, as well as especially to monitor possible corruption schemes. Transferring socks to the category of an almost uncontrollable expendable material can attract the attention of various bad personalities like ensigns from anecdotes. Thus, the transition to new elements of uniforms will also require the involvement of supervisory structures, such as the military prosecutor's office. True, before the final transfer of socks to “consumables” for some time, these items of clothing will, for obvious reasons, be supplied in insufficient quantities, due to which the suppliers, some officers and ordinary soldiers may receive an additional “headache”.

The transition period, during which footcloths and boots will be replaced with socks and shoes, will definitely have a not very nice look. As always happens in such cases, the expected problems will fully manifest themselves, and also, most likely, new ones will appear. All these troubles, naturally, will not be ignored and will become another reason for renewing disputes about the prospects for this or that type of footwear and things to be crooked under it. Nevertheless, judging by the intentions of the Ministry of Defense, all these disputes will remain discussions or swearing without any real consequences. The military leadership of the country nevertheless decided to update the uniforms of the armed forces and is ready for various negative consequences of various kinds accompanying any major changes.

Based on the rather bold statements of the Minister of Defense S. Shoigu about the complete abandonment of the footcloths by the end of the current 2013 year, one can make an assumption that the military department has some kind of plan, according to which all transformations and transitions to the new elements will be completed uniforms. Probably, some similar plans were before, under the previous minister. However, judging by all the events around the soldiers' shoes and the uniform as a whole, the previous leadership of the Ministry of Defense simply did not have time to complete all the planned transformations. Now, it seems, the ministry’s leadership intends to complete all changes, as well as correct all existing errors and prevent the emergence of new ones. However, one should not forget that it is not so easy to transfer all the remaining parts from footcloths to socks, and this is not a quick thing. So in the very near future there will be new reasons for the renewal of old disputes.

Ctrl Enter
Noticed oshЫbku Highlight text and press. Ctrl + Enter
We are
Emergency at the Ministry of Defense
Military Reviewin Yandex News
Military Reviewin Google News
170 comments
Information
Dear reader, to leave comments on the publication, you must sign in.