Research RAS: Does the North Caucasus want to be part of Russia? 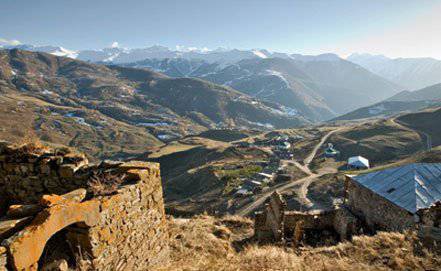 A remarkable study was conducted by the Institute of Ethnology and Anthropology of the Russian Academy of Sciences. Employees of the institute headed by Igor Kosikov prepared a collective monograph, materials for which were collected in all without exception of the North Caucasus regions of Russia. This monograph is a real scientific work, which covers most of the fields of activity of the peoples inhabiting the Russian North Caucasus. The regional economic component, as well as the geopolitical views of the residents of seven constituent entities of the North Caucasus Federal District, were not ignored. Recall that the district itself is composed of the Stavropol Territory, the Chechen, Ingush, Kabardino-Balkarian, Karachay-Circassian Republics, Dagestan and North Ossetia-Alania. The center of the district is the multinational Pyatigorsk.


Employees of the Institute engaged in the study of public opinion in the territory of the North Caucasus Federal District. At the same time, the employees of the research center themselves declare a completely independent study, which was carried out in order to identify public sentiment in the land of the North Caucasus. The last study of this level on the territory of our country was conducted over 20 years ago, and therefore the release of the monograph itself can be considered a great event that sheds light on trends in one of the most densely populated regions of the Russian Federation.

One of the areas of large research was associated with the question of what public sentiment prevails in the studied region. More than a couple of decades have passed since the collapse of the USSR, and during this time, the very concept of the “North Caucasus” has become associated among many Russians with a certain territorial, civilizational, political and economic isolation. Scientists from the Russian Academy of Sciences decided to collect information about how the residents of the subjects of the North Caucasus Federal District see their future. After all, many Russians had a stereotype that the residents of the Caucasian republics after the bloody military conflicts in Chechnya and Dagestan, ceased to feel like Russians and lost the bond that for decades held together the peoples of Russia.
Research by Dr. Kosikov and his associates suggests that the people of the North Caucasus not only do not want to distance themselves from the rest of Russia, but also want the integration of the North Caucasus Federal District and the rest of the Russian regions to be more active. After reading this kind of information, many of our readers can say: they wouldn’t even want to integrate, because donations from the federal center are widely distributed to many republics of the North Caucasus, and other regions of Russia have serious difficulties trying to solicit additional funds from Moscow to solve their top priorities problems.

However, Igor Kosikov and his colleagues, obviously, when creating their collective monograph, understood that such claims could manifest themselves, and therefore provide a series of economic materials, according to which subsidies from the federal budget to the same Ingushetia per capita for 2010 a year were only one-fifth from subsidies to Kamchatka. For Ingushetia - 12,9 thousand rubles per person, for the Kamchatka region - more than 65 thousand rubles per inhabitant, for the Magadan region - 52,7 thousand, for Yakutia - 41,3 thousand, for the Republic of Tyva - 28,6 thousand, for Chechnya - a little more than 10,2 thousand rubles.

In subsequent years, the situation changes for the North Caucasus regions of Russia in terms of subsidies for the better (Dr. Kosikov does not mention this in his monograph). In particular, following the results of 2011, the gap between subsidies per capita in Ingushetia and Kamchatka Krai was no longer 5 times, but 2,5 times (Ingushetia - 35,6 thousand rubles, Kamchatka - 89,6 thousand rubles).

After the start of the implementation of the development program for the Far East, it is obviously expected that the NCFD will lose a large percentage of federal subsidies, but if you believe the data from a monograph prepared by Igor Kosikov and his colleagues, the people of the North Caucasus declare their support for deeper interregional integration with other subjects. The Russian Federation, basing its wishes far from only on the financial component.

Of course, each region has its own strengths, which see any integration process exclusively on the “buying and selling” of interests, and therefore to say that only North Caucasian political elites have a financial interest in close contacts with Moscow - at least naively. Is it possible that in other regions of certain circles (including those close to the powerful) there is no interest in how to get more from the federal treasury, give it back less and hide away ... Has the North Caucasus alone recently been subsidized volumes? .. Is it only in Grozny or Makhachkala that there is such a phenomenon as corruption? ..

However, there are people in Russia (including in the North Caucasus) and beyond its borders who are clearly not interested in the fact that the North Caucasus is an integral part of the Russian Federation and actively integrate into the single development process of the country. It is beneficial for these individuals that the NCFD be a large powder keg, which could at any time take off into the air and split Russia into specific “principalities”. It is these people who are trying with all their might to promote an idea that can be described in such a phrase as “stop feeding the Caucasus”. But does anyone have any illusions that after “enough to feed the Caucasus” there will be no slogans “stop feeding the Far East”, “stop feeding Siberia” and then follow the list.

It is quite obvious that the research of the group of scientist Igor Kosikov gives food for thought about whether the North Caucasus has a future as an integral part of the territory of Russia. If the overwhelming majority of residents of the North Caucasus itself speaks of deepening integration, then all the talk about the fact that the North Caucasus Federal District is a burden for the rest of Russia is more like a manifestation of clearly counterproductive oddity. It is the escalation of such judgments that is the main goal of extremists of all stripes (and, most importantly, their patrons), who want to destabilize the situation and put their heads together the peoples inhabiting multinational Russia.

Ctrl Enter
Noticed a mistake Highlight text and press. Ctrl + Enter
We are
North Caucasian paradoxes: steal a lot, give more ...What prevents to stop the expansion of radical Islam in the regions of Russia? (On the example of the North Caucasus Federal District)
203 comments
Information
Dear reader, to leave comments on the publication, you must to register.