Where should Tajikistan put its independence? ..

January 15 2013
90
We continue the cycle of articles devoted to how the former republics of the USSR are mastered with independence and use the declared freedom they have for their own development and prosperity. Some time ago on the "Military Review" published materials on the economic and political achievements of Latvia and Moldova. Today we will consider such a state as Tajikistan, which appeared on the geopolitical map of the world 9 September 1991. 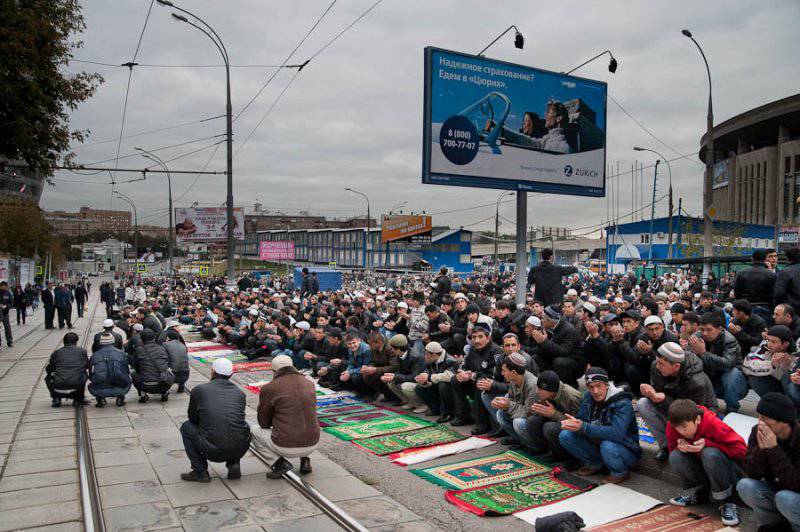 Until secession from the Soviet Union, Tajikistan was in it as one of the republics since December 1929. More specifically, the territory that now represents the Republic of Tajikistan (RT) entered the USSR five years earlier, that is, in 1924 of the year; only there was no such thing as the Tajik SSR from 1924 to 1929 for years, since Tajikistan itself represented autonomy over the territory of the Uzbek SSR during these years.

Despite the fact that the Tajik nation is considered by historians to be one of the oldest nations inhabiting Eurasia, the Tajiks did not have their own state in the full understanding of this word for many centuries. The development of the territory, which is now Tajikistan, took place in the format of either joint rule of Tajik and other dynasties (at best), or in the format of large-scale foreign influence. And whether our Central Asian neighbors themselves sought complete independence is a big question ...

If we consider the history Tajikistan, it can be noted that the very concept of Tajikistan as an independent state appears on the world map in September 1991, when the republic was separated from the USSR. It can be said that the Tajiks were an independent people with their own state, at least at one more stage of their development, namely in 1929, when the Tajik SSR was born, but this education a little over a year later joined the Soviet Union.

It is from 1991 that the “triumphal” march of the Republic of Tajikistan begins as an independent state, which received its sovereignty. However, they did not have time in Dushanbe to realize that in the hands of the authorities, unexpectedly for many, the reins of government were without the need to “coordinate with the Center,” as these powers were immediately snatched from the hands of the country's first president, Rakhmon Nabiyev. It came to a bloody civil war that broke out in 1992, which led to the actual separation of the RT into spheres of influence of certain clans and groups. The clan struggle for the levers of governing the country led to the fact that for more than five years Tajikistan was trying to feel the ground under their feet, but the confrontation of the parties was noticeably aggravated, causing a severe blow to the economy.

The protracted civil war in Tajikistan, which is considered to have ended in 1997, caused enormous damage to this Central Asian country, not only economically, but also in terms of political and social. Only in the first six months of independence, Tajikistan, during an internal conflict, killed about 18 thousands of people killed, more than 70 thousands wounded. In addition, total emigration began from the Republic. About a hundred thousand Russian families were forced to leave Tajikistan. And if we take into account that the majority of Russians in Tajikistan were represented by layers of highly intelligent population (intellectuals) involved in the development of virtually all spheres of life: from education and medicine to industrial production, then you can imagine what loss the Republic suffered from the beginning of the mass departure of its population milestone at the start of 90's.

The situation was aggravated by the fact that at this very moment Islamists were rushing to power in the newly independent Tajikistan, positioning themselves as the United Tajik Opposition (UTO). In order to have an idea about whom the official authorities of Tajikistan fought against, one can cite some segments of the Tajik opposition of the 90 model.

The UTO included the Islamic Renaissance Party, headed by a man like Said Abdullo Nuri. Nuri is known for the fact that even during the existence of the Soviet Union, he was persecuted for trying to spread Islamist literature on the territory of Central Asia. In 1974, Nuri organized an organization called Nakhzati Islomi, which consisted of local young people engaged in outright extremist propaganda, which was issued as an activity of reviving Islam. What sense was this Islam can be guessed at least by the fact that the party that was later created by Said Abdullo Nuri was actively supported by representatives of the Taliban movement, as well as other Islamist movements that developed not without outside help in Afghanistan. By the way, it was the Taliban during the civil war in Tajikistan that provided armed support to their "brothers" from the united Tajik opposition. And whoever was behind the Taliban in its time, many are well aware ...

In this regard, it can be said that at the beginning of 90, certain political forces in the world apparently had plans to use the Islamist resource in the form of the Taliban and other similar "comrades" who actively showed themselves during the Soviet period in Afghanistan to solve their tasks due to the same activity and north of the Panj River. First - in Tajikistan, and then - where will the curve of financial support and ambitions of the Islamists themselves lead.

The greatest activity on the part of militants from Afghanistan during the continuation of the civil war in Tajikistan was observed in 1993-1994, when in fact the only force capable of repelling the Mujahideen's attack was the Russian border guards in RT.

For almost 4 years in the United Nations, the opposing sides tried to reconcile (or pretend to try), but this did not bring any tangible results. Advances toward peace began to manifest only when frictions first arose in the camp of the Tajik opposition itself, and then there was a split. This allowed the central Tajik authorities headed by President Emomali Rakhmonov (Rakhmon, as you know, he became a little later) with the active support of Russia and a number of other CIS states to bring the situation to relative stability.

However, the word "stability" here can be used with great stretch. Despite the fact that the civil war in the country ended more than 15 years ago, the economy of Tajikistan is still in the real ruins. If someone on this account has a different opinion, then this opinion can easily split the figures presented below.

Today, the Republic of Tajikistan is officially recognized as the poorest country among all the republics of the former USSR. According to the World Bank and the IMF, the annual level of per capita GDP in Tajikistan today is no more than $ 900. According to this indicator, Tajikistan is not far from such countries of the world as Lesotho and Chad. Even a state like Haiti, which has experienced a terrible natural disaster and the hardest change of power, is a couple of steps higher in the ranking of countries in terms of nominal per capita GDP.

True, there are statistics of official departments of Tajikistan, which states that the GDP per capita here is about $ 2000. However, the official statistics of the authorities are official statistics of the authorities, and how far it can be far from reality is well known ... In general, in order to obtain relatively objective data on the size of per capita GDP, you probably need to find the average value between the indicators of the IMF and the statistical agencies of Tajikistan itself .

Tajikistan’s foreign debt at the end of 2012 was about 2,1 billion dollars, which corresponds to about 33-34% of the country's GDP. The figure is relatively not high, but the economy of Tajikistan, honestly, is far from monumentality ...

Unemployment rates, which are published by Tajik economists, correspond to 11-12% of the working-age population. How realistic is this figure ... If it were objective and realistic, then why is Tajikistan in the last place in terms of economic development among all CIS countries? ..

Representatives of the Agrarian and Communist Parties of Tajikistan call the number, which is about 2, -2,5 times higher. At the same time, both ruling power elites and oppositionists agree that the greatest unemployment in the Republic of Tajikistan is manifested in the age range of 16-25 years. In other words, young people in Tajikistan simply do not have the opportunity to realize themselves in a particular workplace, which leads to substantial labor migration.

The largest number of labor migrants from Tajikistan are sent to the Russian Federation in search of a place to earn money. Even the head of the organization “Tajik labor migrants” Karomat Sharipov cannot say about the exact number of migrants from Tajikistan in Russia. According to him, about 1,5 of millions of Tajik citizens live in Russia today. If we consider that the population of the Republic of Tajikistan is about 7,5 million people, it turns out that 20% of all residents of the Central Asian republic live in Russia. This is just a huge number!

It is not difficult to guess that most of the citizens of the Republic of Tajikistan who arrived in Russia with the aim of finding a job do not have high professional qualifications. According to the same organization, “Tajik labor migrants” in the territory of the Russian Federation, only 4,8% of Tajiks are engaged in so-called high-tech areas. More than 87% of arrivals from the Republic of Tatarstan are engaged in construction, trade and management services. The seasonal nature of migration leads to the fact that during the period from April to October, the number of migrant workers from Tajikistan in Russia can be 2-2,5 times higher than in the winter period.

Surprisingly, the aforementioned Karomat Sharipov, with such an influx of his compatriots in Russia, also manages to criticize the Russian side, which, they say, cannot provide the “guests” with everything necessary, including proper housing and social security. Mr. Sharipov, in an interview with the Russian BBC service, said that in Russia many visiting Tajiks are used, almost as a slave force. Moreover, it turns out that Russia is also to blame for something else: children and wives in Tajikistan are waiting for their fathers and husbands from Russia to go home, and you see, they disappear in our country, and the police (Russian) often do not take steps to search for ". At the same time, Sharipov is not at all embarrassed by the fact that in most cases the “disappeared” themselves do not wish to return home, having acquired new families in Russia. And, besides, Karomat Bakoevich also forgets that many Tajik labor migrants violate the immigration rules without a twinge of conscience and are trying to actively avoid accounting in the FMS and other supervisory services. But did the BBC ever care?

In general, today Tajikistan is a unique state that, in fact, produces labor in order for this force to realize itself in external territories, primarily in Russia (more than 90% of all Tajik migrants go here). The same labor significantly feeds the budget of the Republic of Tajikistan. By the way, Tajikistan occupies the absolute first place in the world for the contribution of migrant workers traveling abroad in the country's GDP. For the 2012 year, almost 3,4 billion dollars were transferred from Russia to Tajikistan, which is about 50% of GDP in RT. Half of GDP at the expense of migrant workers! Yes, this is the real national personnel leasing!

It turns out that the independence of Tajikistan is also a peculiar concept. Today it is declared, perhaps, by the Constitution of the country ... And in fact ...

We are in Yandex Zen
Moldovan independence: 24 of political uncertainty
Why Uzbeks and Tajiks do not take the world
90 comments
Information
Dear reader, to leave comments on the publication, you must to register.