"Aurora" headed for the maximum task

January 12 2013
119
The Ministry of Defense, in cooperation with the governor of St. Petersburg, is working on the issue of maintaining the first-class cruiser Aurora in the status of ship No. 1 of the Naval fleet. The maximum task is to put Aurora on the move, the minimum task is to overhaul the ship. According to Fontanka, the prospects of the legendary symbol were discussed with Minister Sergei Shoigu, who is in St. Petersburg today, with the mayor Georgy Poltavchenko. 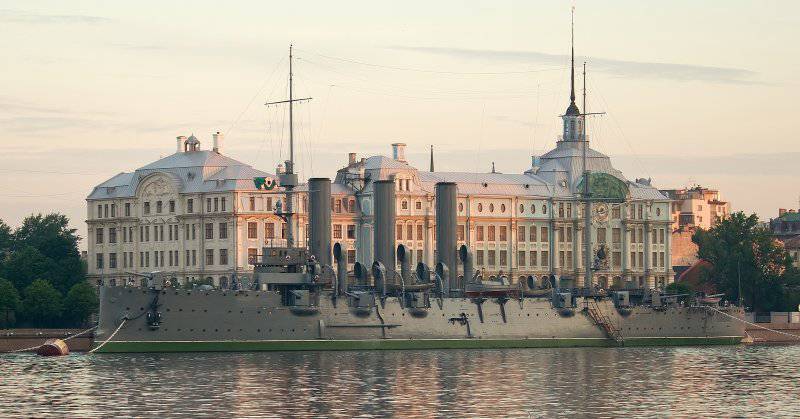 As reported to Fontanka by the chairman of the St. Petersburg Submariners' Club, Igor Kurdin, today, on January 11, he spoke with the head of St. Petersburg Georgy Poltavchenko. According to him, in the near future an interdepartmental working group will be created in St. Petersburg, which will include representatives of the Ministry of Defense, the governor, the Northern Design Bureau, and the enterprises of the shipbuilding complex.

The working group will have to thoroughly study the technical condition of the oldest warship of Russia and work out proposals for its repair and further maintenance.

The developed proposals will form the basis of a comprehensive program to preserve the Aurora as a symbol of the heroic traditions of the Russian fleet for future generations of Russians.

One of the main issues put forward for discussion by the working group will be the study of the possibility of a full restoration of the technical condition of the ship, after which the cruiser Aurora will be able to independently sail.

In this case, Russia will become the second in the world owner of a running historical warship after the United States, which contain the 19th-century Constitution frigate in combat.

The same age as the Aurora and in the past its opponent in the Tsushima battle, the Japanese battleship Mikasa is today dug in the ground in the port of Yokosuka and is a maritime museum.

The Aurora is currently afloat, moored off Petrogradskaya Embankment of St. Petersburg, but needs major repairs, since more than 25 years have passed since the last ship overhaul, the cruiser has worn outboard fittings and auxiliary mechanisms.

During the overhaul of the ship, which took place at the end of 1980-ies at the plant. Zhdanov (now - Severnaya Verf LLC), the engine and boiler systems were dismantled from the cruiser, the auxiliary steam engines were replaced with diesel units. In addition, the underwater part of the ship hull was replaced, but the keel, frames and engine rooms were retained. Thus, the restoration of the Aurora to the state of a full ship is technically possible.

It should be noted that Defense Minister Sergei Shoigu was in Petersburg on a working visit, and the Aurora had been carefully prepared the night before, expecting the commander-in-chief to visit the cruiser. However, the schedule of the minister’s visit was so tight that he did not have the opportunity to call on Petrogradskaya Embankment. Nevertheless, according to the Fontanka, Shoigu discussed with the governor of St. Petersburg the prospects for the future fate of the ship.

Recall on the eve of "Fontanka" wrote about the past on Thursday, 10 in January, at the "Aurora" meeting of high-ranking officers from the central apparatus of the Ministry of Defense. The generals discussed the technical condition of the ship. According to experts, there are three possible options for the further fate of today's museum piece. The first is the return to the cruiser of a military crew and giving it the status it had until the 2010 of the year, that is, half of the warship - half of the branch of the Central Naval Museum.

The second way to keep the symbol of revolution afloat was once laid out by veterans of the fleet in a letter addressed to Governor Georgy Poltavchenko: to give the status of a naval auxiliary fleet vessel, commission the operation to a qualified civilian crew and select the naval company of honor guard to comply with naval rituals.

The third option is the most expensive, but, according to sources, "Fontanka", which has very real prospects. These include putting the ship into a repair dock, installing engines, propellers and navigation equipment, and returning the Aurora to the fleet as a training ship for Nakhimov and cadets of marine universities. According to experts, the current state of the cruiser allows you to put it on the course during 2 - 3 years by the forces of the United Shipbuilding Corporation.

Recall that the military crew left the cruiser 1-rank "Aurora" 1 December 2010 of the year. This decision was made after an illegal party of VIPs was held aboard the Aurora on the personal instructions of the commander-in-chief of the Navy, Vladimir Vysotsky. After the outbreak of scandal, the admiral reprimanded the officers who carried out his order, and the Aurora itself suffered the main punishment, which they decided to withdraw from the Navy. In October 2011, activists of the anaron movement went aboard the ship under the guise of tourists, climbed onto the mast and unrolled the Jolly Roger flag. The audit showed that with the departure of the military crew, in fact, the Aurora was left defenseless against vandals and hooligans. Then, a detachment of seconded sailors was formed from among the LenVBB servicemen, who began to carry out round-the-clock duty. In December 2010, the Minister of Defense Anatoly Serdyukov signed a document, according to which the ship of military glory was transferred to the status of a full-fledged museum object, and the “crew” should be staffed from civilian personnel. The deadline for excluding the Aurora from the payroll of the Russian Navy was set before August 1 2012. October 16 2012, the cruiser left the last sailor.

Ctrl Enter
Noticed a mistake Highlight text and press. Ctrl + Enter
We are
"Admiral of the Fleet of the Soviet Union Pots" project 22350 - the transition from St. Petersburg to KronstadtSerdyukov headsets surfaced at the "Northern Shipyard"
119 comments
Information
Dear reader, to leave comments on the publication, you must to register.