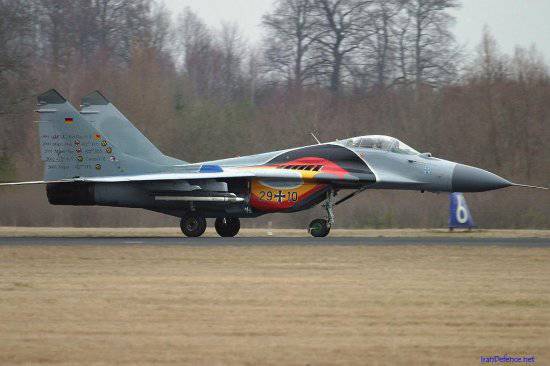 By the time of the tense Cold War finals at the end of the 1980, the Russian MiG-29 appeared as a symbol of the communist threat to NATO air superiority in Western Europe. Every American pilot trained to fight this Soviet aircraft. And so, there was a prospect of meeting them in the air and making the transcendent air battle a reality.


In America, millions of dollars and uncountable labor of specialists were spent on modeling the probable flight characteristics of the MiG-29 and the tactics of its actions using combat training units such as Top Gun and Red Flag. Global intelligence tools provided American squadrons with detailed information on MiG-29. These data were used to develop tactics of actions against the MiG-29 and its notorious missile with a thermal targeting head P-73 Archer.

The air combat missile P-37 Archer is used with a fantastic helmet-mounted sight, which will soon be installed on Western fighters. The ability of the full-range launch, together with incomplete data on the effectiveness of the pulse-Doppler radar MiG-29, further strengthened the legends about its deadliness. 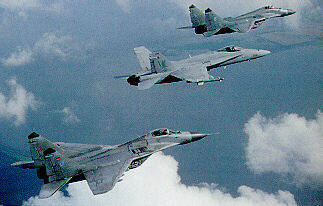 FA-18C in the ranks of the MiG-29, a few years ago this could not even be imagined

However, the long existence of the MiG-29 in the threatening darkness behind the Iron Curtain came to an end in November 1989 after the fall of the Berlin Wall. During its leadership of the Warsaw Pact countries, the USSR armed several Communist East German bases with more than 100 MiG-29s. With the spread of democracy, which reached the highest point with the unification of Germany, the Russian MiG-29, along with hundreds of MiG-21 and Su-22, joined the Luftwaffe.

For the first time, the NATO Air Force received a legal opportunity to study in detail the MiG-29 and determine its characteristics, which until that time, Western experts could only guess. After the complete unification of the Luftwaffe, the squadron of the MiG-29 now consisted of German pilots trained by both the Soviet Union and the United States, who only resisted each other a year ago in defense of their divided homeland. This is a bizarre paradox, rich in controversy, but it continues to provide an unimaginable insight into what was previously one of the most seductive puzzles for America during the Cold War: the possibilities of Soviet advanced air power.

Wing to wing over germany

In the years following NATO’s receipt of these now-friendly MiG-29 squadrons, most of the secrets surrounding the aircraft were scattered. However, much of what has been learned is just raw technical data. Since the data alone cannot fully acquaint the pilots with the combat capabilities of the enemy, the NATO units Luftwaffe MiG-29 were more and more often used in training air battles with US Air Force aircraft deployed abroad.

During such exercises the planes flew against each other, as it would be in real combat. Within a few weeks, various options were worked out. During these battles, in which only real rockets and shells were not launched, invaluable experience was gained. 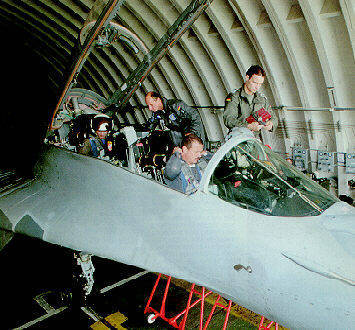 The first and only squadron aviation fleet The United States took part in such exercises 82nd VFA. In September 1998, the Marauders, as the squadron is called, arrived at the former East German Air Force fighter base at Laage, a two-hour drive from Berlin on the Baltic coast.

VFA-82 made a non-stop flight from NAS Cecil Field to Jacksonville, Florida, which was made possible only by refueling in the air from tankers based in McGuire AFB.

With one quick roll, the nine most recent Boeing F / A-18 Hornet and 98 sailors, along with thousands of pounds of spare parts, successfully crossed the 6900 km to Laage. 1 squadron of the 73 th wing of the Luftwaffe, Major Tom Hahn Marauder, warmly met the commander of the 24 squadron quickly deployed the parking lot next to their German masters. After the XNUMX hours, pre-flight briefings were held and the first assignments began soon. 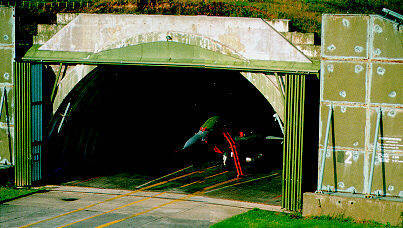 The Relic of the Cold War Era - Strengthened Aircraft Shelters

Up to ten flights per day were divided into three waves. This almost combat pace of departures was maintained for two weeks, testing the endurance and endurance of flight personnel.

Red and Blue designations, meaning attacking and defending side, alternated between naval pilots and Luftwaffe pilots in order to give an opportunity to demonstrate the full range of flight and tactical characteristics of each aircraft. Often, pilots retreated from the type of action they prescribed and changed their roles. However, in most cases, the American pilots were struck by the amount of off-boresite launch demonstrated by the P-73 with its helmet-mounted target designation system. 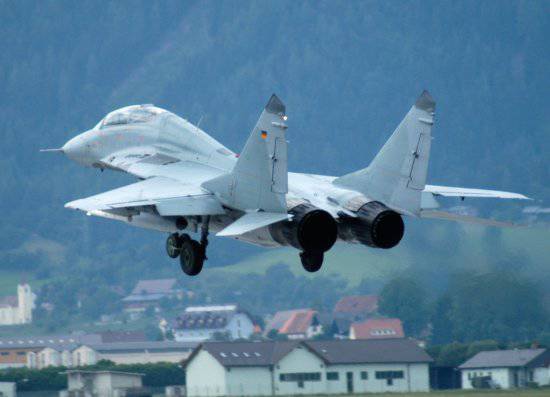 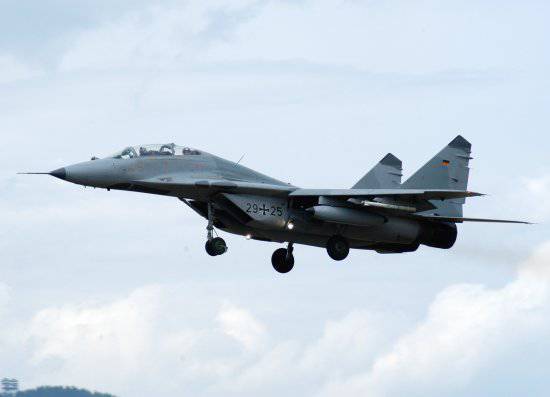 Several comparative demonstration flights were conducted in which MiG-29 and Hornet took part. When performing most of the tasks, the Luftwaffe pilots talked between themselves and the ground controller in Russian or German to prevent American pilots from intercepting their talks and not giving them an unfair advantage. After two weeks of intensive flight, the data was examined by both parties; Much of this is classified. However, such momentous meetings are planned not only to achieve strategic and tactical goals, but also for bilateral cultural exchanges, which also took place. Comparing their former opponents, both the Germans and their American colleagues discovered a universal community, shared by all the fighter pilots, the love of flying and the partnership. Today, watching how these high-class pilots work together, it’s hard to imagine that only a few years ago, they were preparing to kill each other.

Fights with MiGs
From the perspective of Lt. Joe Guerrein of VFA-18

Four MiGs are waiting for their next flight to Laage

After returning from a trip in April, 1998, VFA-82, under the command of Greg Nosal, decided to use a favorable turn in the training process in order to get the best opportunity to learn how to conduct air combat and ground attack. They trained until July 1998 in Langley AFB, VA, honing their air combat skills against the F-15 of the 1 th Fighter Wing. In August, the Marouders were practicing air target attacks at Puerto Rico. After returning, attention was again focused on air combat, as Marouders wanted to better prepare for training battles with German MiG-29 in the heart of former East Germany.

The Marouders flew in on their eight FA-18Cs and borrowed one double Hornet from the VFA-106 so that they could fly with the German pilots. At dusk 4 September, 1998, two US Air Force KC-10 tankers, accompanied by nine FA-18C, flew out of Florida in a ten-hour raid across the Atlantic. It took 10 refueling to fly to the east coast. After separation from tankers, Marouders became the first US Navy squadron to land at Laage base in Germany. 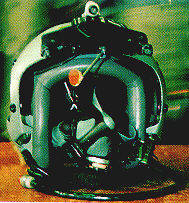 The first thing that caught my eye after arriving at the airbase was that it was strengthened much more than the western ones and had ground-covered hangars for the MiGs, which were left from the Cold War era. When the pilots got out of the planes, they were warmly greeted by their German colleagues and invited to a party in their honor, where there was excellent food, drinks and warm conversations. Marouders arriving on Friday had the weekend ahead for acclimatization to a new time zone and for exploring the city of Rostock, however, the thoughts of all the pilots were only about the upcoming battles with real MiG-29.

September 7 hosted the first fight between Migami and Hornet. All pilots were anxiously awaiting the results of the first fights with MiGs. One by one, the pilots returning from the mission were surrounded by a crowd of comrades asking what they saw, what they did, what techniques worked, and what did not. Even the technicians asked the pilots if they won or not? A few days later, maneuvers began with the participation of mixed groups of aircraft: MiGs and Phantoms. It was very easy to work with the Luftwaffe pilots. They speak very good English and are very well prepared. Marouders focused on improving tactics and trying to find new tactics to fight MiGs. For the most part, the MiG's capabilities were as good as expected and it was a good way to learn how to counter them in future battles.

Patches of the 1 Squadron of the 73 Fighter Wing
Luftwaffe (Jagdgeschwader 73).

Marouders also had the opportunity to get to know Europe better. All officers and many privates traveled to Berlin during the weekend and visited historical places. Another part of the staff remained in Rostock, which prides itself on its restaurants and shops.

The technical team Marouder'ov did everything to maintain the technical condition of the aircraft away from home. With 18, on average, departures per day, staff worked hard to solve all problems, from minor ones to engine replacement. All pilots understand that without the VFA-82 maintenance team, these exercises could never have taken place. Also, Marouders cannot express enough gratitude to the technical personnel of the MiG-29 and F-4 squadrons, who have devoted a lot of effort and labor to helping their American colleagues.

But it all ended too quickly and the Marouders had to pack their things and go back home. And so, on September 18 1998, having spent the night in Mildenhall, England, VFA-82 made another throw across the ocean. The benefits in terms of international cooperation gained from this visit, the moral and tactical lessons were enormous. Marodeurs are confident that the lessons learned in Germany will help them prepare for any future conflict involving the MiG-29.

The Luftwaffe is armed with the first-edition MiG-29 (Fulcrum-A) of the end of 70-s of the early 80-s. FA-18C - the latest modification of this aircraft of the end of the 80-s. According to the characteristics of the onboard equipment, the FA-18C is superior to the MiG-29, but in flight characteristics, the MiG-29, in turn, looks better than its opponent. Despite the fact that the MiG of this modification on 10 years older than the FA-18C, it turned out to be a difficult opponent for the American fighter.

Unfortunately, in this article the author does not provide any specific data on the results of training battles, but for some comments it is clear that the MiG-29 apparently had an advantage in fights with FA-18C.

For some clarification of the picture I will cite only one quote from the collection "Farnborough International 98" (Collection of the Society of British Aerospace Companies SBAC, dedicated to the 50 anniversary of the Farnborough Air Show), page 81: "For the Western Air Force it was a big shock when F-16 armed SIDEWINDER missiles (AIM-9M - DS) were compared in tests (apparently in the same Germany - DS) with MiG-29, armed with Р-73. From 50 fights against Р-73 AIM-9M won only one . Short-range training battles between F-15 with AIM-9M and MiG-29 with a helmet-sight and P-73 showed that MiG can capture targets in airspace are 30 times larger than F-15. "

In conclusion, I cite the comparative characteristics of the MiG-29 and FA-18C. Characteristics taken from Military Aircraft, Airlife, England, 1994.