Maneuvers survive. And if the war? 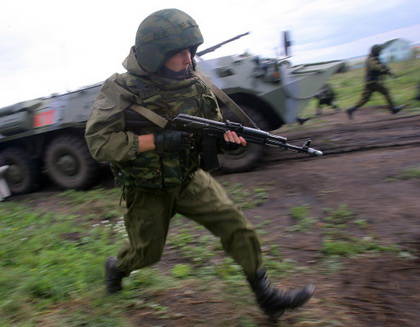 Any maneuvers are a rehearsal of hostilities. Strictly speaking, they are then carried out to check the combat readiness of the troops, the degree of their training. And also in order to test those concepts of warfare that are being introduced into the troops. The largest maneuvers of the Russian army "Vostok-2010" this year should begin only in mid-June. But preparation for them has turned, it seems, into a real test of some concepts of modern military construction.

The Khabarovsk Committee of Soldiers' Mothers (headed by Vera Reshetkina, a very authoritative and resolute man) suddenly began to receive letters en masse that the commanders of military units prevent the dismissal of conscripts who have already served one year. It came to quite wild cases. So, the deputy commander of one of the battalions simply burned civilian clothes in which demobels were going to go home. Human rights activists have found that the cause of mass arbitrariness is just the future maneuvers "Vostok-2010". When planning them, the specialists of the General Staff did not take into account (by the way, I do not exclude that they did it on purpose) that the time of the exercise coincides with the mass dismissal of conscripts and the arrival of nothing that can recruits. It turned out that there was no one to prepare the training ground for maneuvers, and also to demonstrate high proficiency and combat coordination during the exercises. In this situation, the commanders went to violate the rights of soldiers, refusing to fire them.

This история It shows very clearly what, in practice, the refusal of a partial transfer of the Armed Forces to a contract and the intention to keep a conscript army can turn into a country's defense capability. The army leadership does not tire of reassuring: as part of the reform, it was possible to transfer all units and formations of the Armed Forces to a state of constant combat readiness. And now, according to the Chief of the General Staff, Nikolai Makarov, it takes no more than an hour of preparation for the unit to begin the execution of the combat order. At the same time, no one explains how this will magically happen if, during a one-year service, every six months the personnel of the compound are updated by half. In fact, this means that at any given moment, half of the soldiers are recruits.

As one of the experts remarked on this, not without irony, it turns out that combat readiness is one thing, and combat capability is completely different. In fact, all the “constant readiness” comes down to the fact that a part is fully staffed by states. But what the military can do is the tenth thing. And here it turns out that this part is unable to fully participate even in maneuvers, which, I remind you, are a rehearsal of hostilities. I note that the date of commencement of military exercises, the venue and the scenario are also known in advance. What can be said about the real military conflict. It may be objected: a real war is preceded by a so-called threatened period, when relations with one or another country become aggravated. During this period, you can cancel the dismissal, to mobilize reservists, in a word, to prepare. However, what year we are told that the conflicts of the future will be characterized by suddenness and transience. As it was during the Russian-Georgian conflict. Despite the fact that in the Russian units there were, according to various estimates, from 25 to 30 percent of soldiers-conscripts, after all, the basis of the grouping consisted of contract servicemen. This may explain the fact that the group was able to deploy in such a short time. Now, when it is decided to actually abandon the contract, in the conditions of a sudden conflict, the military command will face an extremely simple dilemma. Or spend precious hours and days on the re-formation, so as not to send recruits into battle. Or use unprepared people as cannon fodder. The story of the preparation of the exercises "Vostok-2010" directly indicates this.