Moldova may be under the heel of Transnistria

January 10 2013
46
Over the recent period, information came from Moldova that the official authorities of this country would not mind resolving the so-called Transnistrian issue by their own methods. During the visit to Chisinau Angela Merkel, the issues of territorial problems of Moldova were raised especially openly with a view to the European Union paying attention to the former Soviet Republic that was torn along the path of European integration. However, Mrs. Merkel reacted with sufficient coolness to the aspirations of the current Moldovan power elites and traditionally advised not to turn off the course, but at the same time expressed the view that Chisinau would be good to solve their problems on her own. 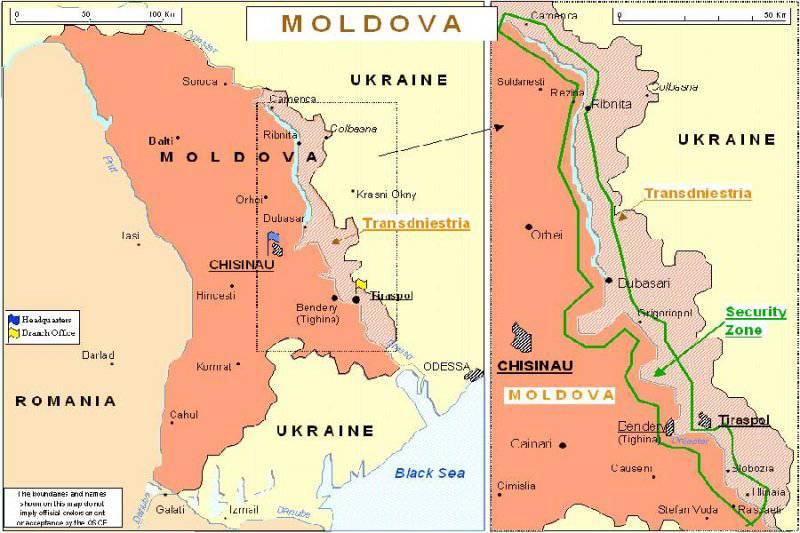 The official Chisinau announced that the visit of Mrs. Merkel was productive, and what remained to be said, but at the same time he finally realized that the West is clearly not going to arrange adventurous scenarios aimed at engaging Moldova under its warm wing. Epic with South Ossetia, apparently, the West was enough for the eyes, and therefore Merkel clearly does not intend to encourage frank provocations.

As a result, the authorities in Chisinau, with their “trouble” in the person of the Transdniestrian Moldavian Republic (Transdniestrian Moldavian Republic), remained practically one-on-one. Well, it can be said that Romania helped as much as it could, ready to accept Moldova as its eastern region under its jurisdiction, only Romanians themselves in the European Union enjoy bird rights, and therefore they are particularly pleased (except verbal) from Bucharest not manifested.

The official Chisinau, realizing that it was necessary to take some steps in terms of agreements with Tiraspol, decided to put a kind of pressure on the PMR. Suffice it to say about the railway branches of Transnistria, which the Moldovan side took control of, having the opportunity to control all the cargoes going in the direction of Tiraspol. A certain pressure on Transnistrian leaders also manifested itself in the media sphere. Tiraspol was denied that the local channels were broadcast in Moldova, but the Moldovan channels on the PMR broadcast went without any problems. Evil tongues even began to say that Moldova could well “strangle” Transnistria economically and force its authorities to abandon the ideas of independence.

But in the coming year 2013 came from Chisinau news that Moldova itself can fall under the economic cap of Tiraspol. Is this possible? - readers may ask. Answer: in the current situation - quite ...

The fact is that the north of Moldova is often experiencing difficulties with the supply of electricity. Moldavian Energocom has signed a new contract with the Ukrainian electricity supplier DTEK PT. According to this contract, the price for electricity consumers in the northern regions of the country will remain at the current level (around 7 eurocents per 1 kWh) until April 2013. The World Day of Laughter will obviously not bring joy to Moldova, since the price of electricity supplied from abroad may significantly increase. And the rise in electricity prices for the population at a time when negative in the Moldovan economy and so much more than positive is clearly not included in the plans of the authorities. In this case, you need to look for alternative suppliers who could supply electricity to the north of Moldova at reasonable prices.

Based on the infrastructure features and logistics of the laid power lines, there is only one such alternative supplier for Moldova. And this supplier - Dniester GRES. But the whole snag is that the Dnestrovskaya GRES, although called the Moldavian State District Power Plant, is located somewhere in the territory of the Transnistrian Republic. Moreover, the Dniester GRES has already been a part of the Russian business group “Inter RAO UES” Grigori Kurtser and Boris Kovalchuk for 7 for years (a controlling stake).

It turns out that Chisinau will have to bow not only to the authorities in Tiraspol, but also to seek help from Russia, and this, you know, for Filat and Timofti, aimed at the European course of “development”, is like a sharp knife. What kind of European integration is it when you need to run for relatively cheap electricity to those against whom you want to integrate so ... 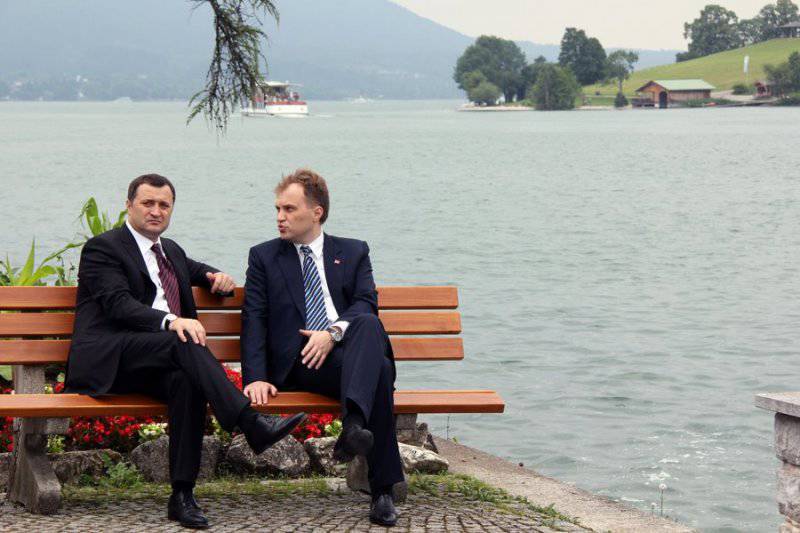 In the photo - Vlad Filat (Moldova) and Yevgeny Shevchuk (PMR)

But even against this background, a new problem looms on the horizon for official Chisinau. The fact is that electricity from Transnistria was cheap both for Transnistria and for other consumers only because official Tiraspol received Russian gas with big discounts. He gets gas with discounts today, but after the increase in prices in January, 2013 decided to raise prices for Russian gas for local industrialists by as much as 68%. And although these prices still do not compare with European (about 250 dollars for 1000 cubic meters of gas for production in the territory of the PMR), the increase in the cost of energy produced at the Dniester GRES will inevitably occur.

It turns out that the Ukrainian energy sector will now monitor how much the price of electricity for Moldova from Transnistria will rise, and also decide to go out at about the same price (if they manage to get the same price).

At the same time, it should not be forgotten that the EU-Romania also receives electricity from the Dniester GRES. And this once again makes it possible to think over who and whom on the banks of the Dniester and Danube can economically “force friendship”. Tiraspol, which operates with relatively cheap energy resources from Russia, has more opportunities in current conditions.

Such a state of affairs as a possible economic dependence of Moldova on Transnistria can finally put an end to all European integration aspirations of Kishinev pro-Romanian politicians. If we take into account that these gentlemen have no time and place for maneuver at all, then they will have to make an unequivocal choice in the near future. Well, and how can we now declare a desire for the West, when during the years of independence and independence, Moldova has turned from a flourishing republic into the poorest state in Europe.

According to the results of studies conducted by European and world analytical agencies, today, around 23% of the country's population is below the poverty line in Moldova. That is, almost every fourth citizen of the republic is forced to make ends meet. For comparison, the Russian poverty indicators are 12,9% (according to World Bank estimates). True, the matter is not even in percentages, but in real terms of per capita income. Moldova’s per capita GDP is $ 3380. According to this indicator, Moldova today is at the very tail of European economies, and globally it “competes” with countries of the world, such as Honduras ($ 2900), Cape Verde ($ 3450) or Cambodia (about $ 2500).

According to the latest data, the average monthly salary in Moldova is about $ 190. The industrial decline in the time since 2008 was about 22%! Record reductions in the number of workers took place in one of the most important sectors of the Moldovan economy - in agricultural processing: minus 34% only for 2009 a year (every third was fired). And the pre-crisis production scale has not yet been achieved. Will it be possible to achieve, if electricity also jumps in price ...

It is understandable why many are trying to go to work in Russia or Ukraine. The same World Bank claims that about 30% of Moldovan GDP is made up of income from Moldovan citizens who have left to work abroad. Of these funds, about 80% are funds from the Russian Federation.
Is this independence in Moldovan? ..

Ctrl Enter
Noticed a mistake Highlight text and press. Ctrl + Enter
We are
Russian peacekeepers again want to "demobilize" from TransnistriaNew US Democratic Approach in Moldova: Unite and Conquer
46 comments
Information
Dear reader, to leave comments on the publication, you must to register.