January 9 2013
13
Despite the fact that the Chinese New Year (according to the lunar calendar) comes a few weeks after ours, the Chinese military and industrialists could not help but note the coming of 2013. In the last days of last year, two new ships entered the naval forces of the People’s Liberation Army of China. 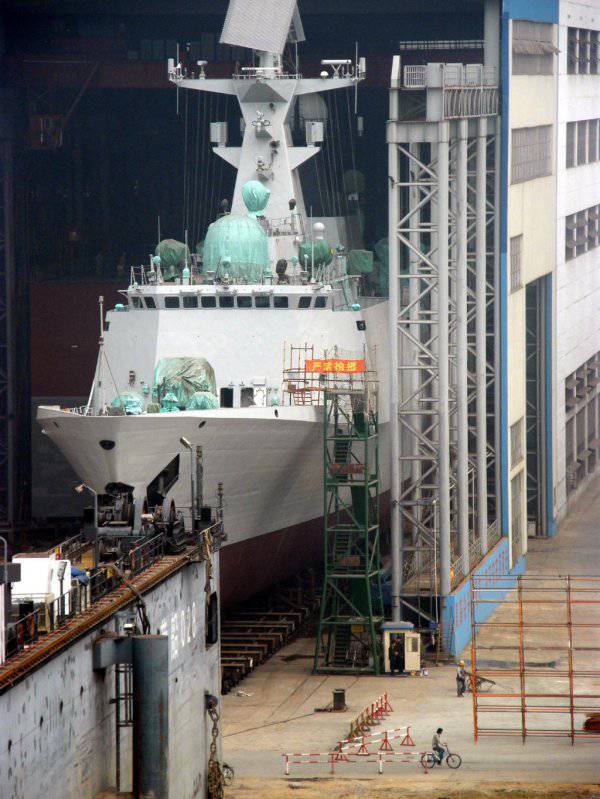 December 22 to the North fleet The Navy adopted the Linyi frigate, built in accordance with project 054A. The ship was built at the Guangzhou Huangpu Shipbuiding Company shipyard. During the construction, the new frigate underwent some changes. So, it was originally planned that it would become the next warship of project 054. However, after the assembly began, the leadership of the PLA Navy decided to change the construction program. As a result, Linyi was not the third ship of the original project 054, but the 13th frigate in the 054A series. The new frigate was launched on December 13, 2011, after which it was completed and tested for almost a year.

Three days before the frigate Linyi at the shipyard Hudong Shipyard was launched the ship of the same project Liuzhou. Despite a slight advance in terms of descent, the Liuzhou ship was commissioned later than its fellow. The solemn ceremony of its commissioning in the Southern Fleet took place on December 26. Thus, Linyi and Liuzhou became the twelfth and thirteenth ships of the project 054A. It is noteworthy that only for the 2012 year, the PLA Navy received four such frigates. Seven frigates of the 054A project were built at the Shanghai Hudong Shipyard plant, the rest in Guangzhou, at the Guangzhou Huangpu Shipbuiding Company.

After the December ceremonies, the total number of frigates of the 054 and 054A projects is 15. Two of them were built in accordance with the project 054, the rest - on the updated 054A. Six ships are currently serving in the Eastern and Southern fleets, three more - in the Northern. The first two ships of the family belonging to the 054 project were commissioned in the 2005 and 2006 years. The transfer of the frigates of the 054A project to the fleet goes from the 2008 year. In late spring and summer of the 2012, two 054A frigates were being launched at both shipyards, which are currently being tested. In addition, in late November, another ship was launched in Shanghai. Now it is being completed at the mooring wall. Thus, there is every reason to believe that on the stocks of two shipyards there are still a certain number of ships in different degrees of readiness. 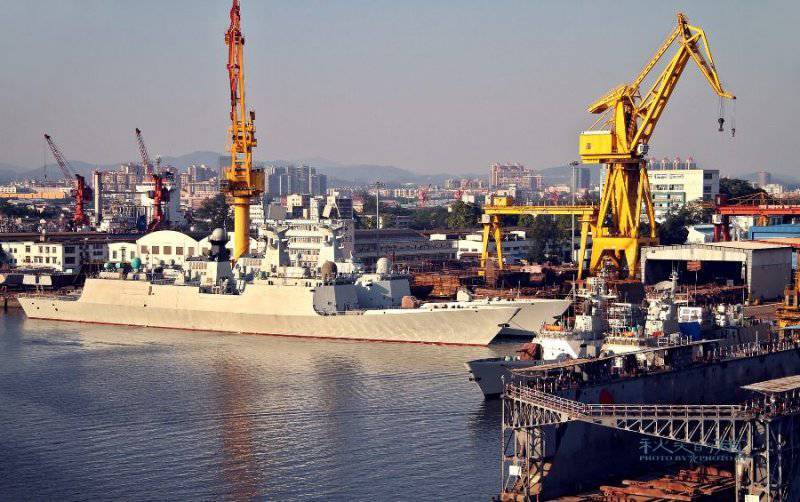 The main goal pursued when creating projects 054 and 054A, was the replacement of obsolete frigates of the project 053, created in the early seventies of the last century. When designing the renewed 054A project, Chinese design organizations worked in cooperation with the Russian North Design Bureau. As a result of this cooperation, it was allegedly succeeded in imparting a modern look to the 054A project and fulfilling it in accordance with the latest trends in the development of ships of this class.

During the processing of the original 054 project, the size of the frigates increased slightly: the length increased by two meters and amounted to 134 m, and the hull expanded to 16 meters. Due to the filling of additional volumes with various equipment and payload, the displacement of frigates of the 054A project significantly increased compared with the original project. Thus, the standard value of this indicator increased from 3500 to 3600 tons, and the maximum - from 3900 to 4050 tons. In this case, the power plant of the ship has undergone minimal changes. Like their predecessors, the 054A frigates are fitted with four French-made SEMT Pielstick 16 PA6V-280 diesel engines. The total power of such a power plant exceeds 25 thousands of horsepower. The torque of the engines is transmitted to the two propellers. Four diesel engines provide maximum travel speed of no more than 28-30 knots. With an economical speed in 18 units, the frigate can overcome the order of 3800 miles. The crew of the frigates of projects 054 and 054A consists of 160 people.

It is alleged that the frigates of the project 054A carry a full set of all necessary electronic equipment. So, they are equipped with radar stations "Type 382", intended for viewing the surrounding space, as well as stations "Type 344" and "Type 345". The latter are intended for detecting and tracking targets, as well as for controlling anti-ship and anti-aircraft missiles, respectively. In addition, the 054A frigates are equipped with sonars, navigation systems, electronic intelligence and suppression complexes. All electronic systems of frigates are combined by the French informational production control system Thomson-CSF TAVITAC. The HN-900 bus is used to transfer data between various electronic equipment units. 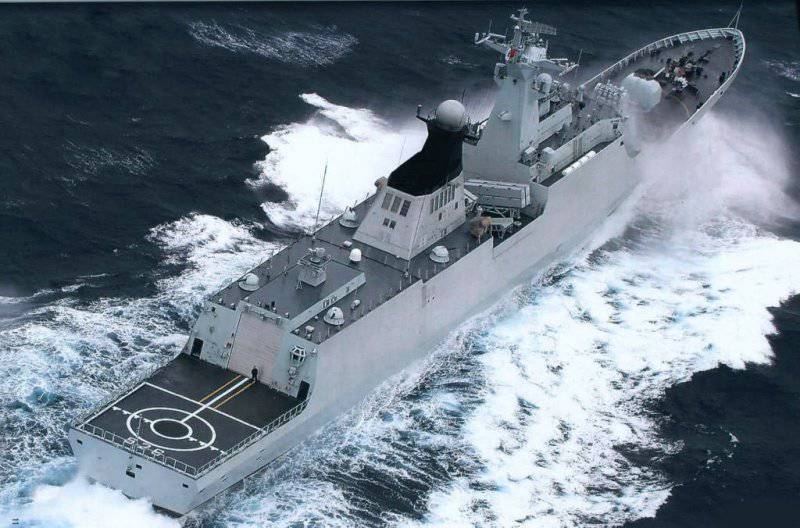 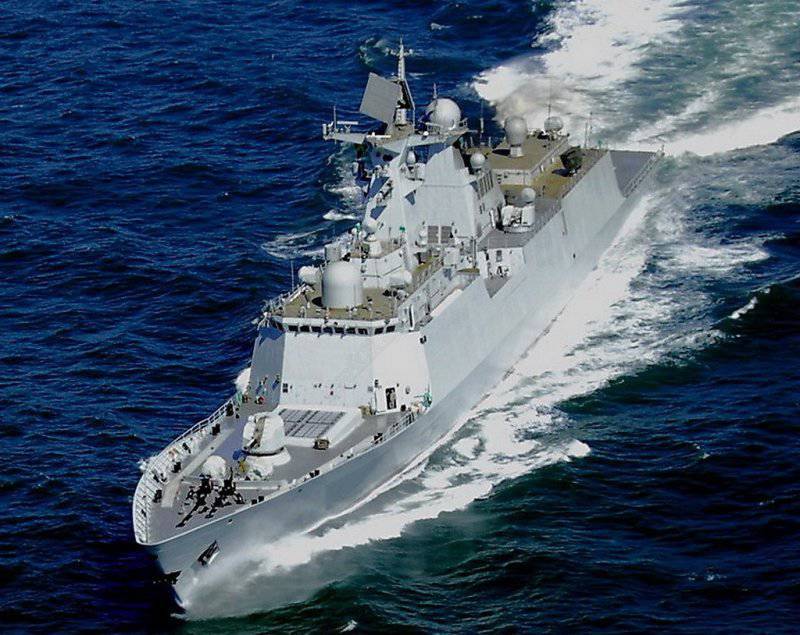 The main innovation in the 054A armament project is a universal vertical launcher that allows you to simultaneously transport and use up to 32 missiles of various classes. The standard equipment of this installation is the HQ-16 anti-aircraft missiles, which are a copy of the Soviet / Russian Buk missiles. Such missiles provide self-defense of a ship at a distance of 25-30 kilometers. The main means to fight the enemy ships are anti-ship cruise missiles YJ-83. With slightly larger dimensions compared to the HQ-16 anti-aircraft missiles, the anti-ship YJ-83 can hit targets at ranges about 200 kilometers. The 054A frigates of the frigates consist of one PJ26 artillery mount with a 76 caliber millimeter gun (created on the basis of the Soviet / Russian AK-176) and two seven-barrel 30-mm anti-aircraft 730 anti-aircraft guns. Also in the composition of the frigates include two 324-millimeter torpedo tubes and rocket launchers to combat enemy submarines.

In the rear part of the superstructure of the 054A frigates, a hangar is provided, the volume of which allows you to carry a Harbin Z-9C helicopter, Ka-27 or similar. The helicopter rolls onto the deck’s take-off area through large doors at the rear of the hangar. Judging by the available data, in addition to the helicopter itself, various anti-submarine and anti-ship armaments used by the rotary-wing machine can be placed in the hangar.

In 2009, there was information about the completion of another version of the 054 project. According to various sources, the first ship of the project 054A + (also denoted by the index "054B") is currently being completed and will soon be launched. The project with the letter “A +” or “B” differs from 054A in the composition of the radio-electronic equipment used by the combat information and control system and, possibly, by the weapons. There is every reason to assume the use of new models of anti-aircraft and anti-ship missiles. However, official Chinese sources still remain silent and do not disclose the technical details of the 054A + project.

If the rumors of 2009 on the commencement of construction of the first ship of the 054A + project are true, then in the very near future we should expect, at a minimum, its launch. At the same time, there is no official information about this ship yet, and Chinese sailors currently prefer to “brag” about new frigates of the 054A project.

Ctrl Enter
Noticed a mistake Highlight text and press. Ctrl + Enter
We are
PLA Navy Opportunities to Combat Carrier Strike Groups. Part 1"Svetlana". History of creation
13 comments
Information
Dear reader, to leave comments on the publication, you must to register.