Republic of the former USSR. Latvia: years without “occupiers” 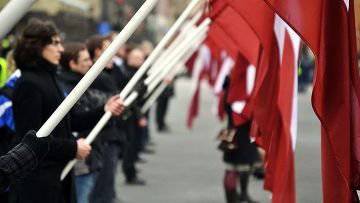 In 2013, our Latvian neighbors are preparing to celebrate the 95 anniversary of independence from Russia. This is a significant event for Latvia in November of the 1918 year, so there is still a lot of time before the preparations for the stormy and magnificent celebrations in November. During preparation, the Latvian authorities will have to mark one more date - in August - the next anniversary of the “liberation from oppression” of the Soviet Union, which (liberation) opened the way for Latvia to the bosom of a single European family, to growth and prosperity ...


In this material, we will look at all the Latvian achievements over the years of epochal independence from a big and “bloodthirsty” neighbor that the official authorities of Latvia can be proud of. After all, it is precisely the acquisition of independence from a state that for decades, according to the authorities in the Latvian bloodlines, and the status of a member of the European Union are the main events for this small Baltic country for all its new history.

Western politicians and, accordingly, the mass media often declare that during the years of independence from the USSR Latvia has made great strides in terms of the development of the economic and democratic components of the state process. Behind these tirades is often traced the ill-concealed desire of the Western sponsors of the “Latvian miracle” to encourage Riga because it declared a final break with Russia and embarked on a path that benefits the Elder Brothers with overseas registration.

So, the “Latvian miracle”, as stated by Latvian politicians and their European and American colleagues, took place. Let's see what this miracle is about, and what ways you need to go in order to achieve the same prosperity that our former comrades in a single Union achieved.

The economic miracle of Latvia. After the entry of this country into the World Trade Organization (1999), as well as in the EU (2004), the growth of the Latvian economy could be openly envied. The average economic growth to 2009 year was about 6,4% per year. In 2006, the annual economic growth in 12,6% was recorded, which even China could envy today. Latvia’s success years are linked to such a person as the first woman president, Vaira Vike-Freiberga, who, as you know, spent most of her life overseas - in Canada, and only a year and a half before being elected to the presidency, she found herself in “native” Latvia . Aspiring to European integration by all the forces of Latvian citizens, Vika-Freiberga’s long absence in the homeland did not embarrass, and the country (not all, of course) met her stormy and unceasing applause with her election in 1999.

So what are the economic successes of Mrs. Vaira, who instantly gave the Latvian financial system such a powerful impetus for development?

Perhaps, Mrs. President has managed during the years of her rule to build a powerful production system, which has become truly competitive in Europe? Perhaps, Vike-Freiberga used some advanced financial laws so that Latvia would rush into a bright democratic and economic future? But neither the one nor the other Latvian president of the female sex has not been born. The main "achievement" of Vike-Freiberga in her post, as many political analysts in Latvia themselves say, was that she purposefully showed the West her inexhaustible desire to sever any ties with Russia. The anti-Russian direction of the rhetoric of Vike-Freiberga during the entire presidential term did not literally go out of her mouth, which allowed Western partners to conclude that “our man” was sitting in the presidential chair in Riga. And in order for this person to remain “our”, the person had to help him by all means, politically and economically. And such assistance went to Latvia. This, as already noted, the country's accession to the EU and NATO, as well as solid financial revenues, which unexpectedly for many Latvians began to come into the country from foreign banks. Only now the naive Baltic citizens did not yet know that Western aid was never gratuitous and would not be so this time. These are only Russian “invaders” who could afford to help Latvia in such a way that people in the “occupied” territories lived better than those who “occupied these territories”. European and overseas support was different. Outwardly, she looked powerful and fraternal, but on closer examination it turned out that the Latvian "brothers" did not donate money, but lent.

Billions of dollars came to Latvia, filling its economy with life-giving power, which brought Riga, Liepaja, Jelgava and other cities to such euphoria that the sound of the clicking power of the western counter and the citizens were no longer heard. But...

Latvia's accession to the WTO eventually led to the fact that mountains of foreign products flooded store shelves, forcing local farmers to think about whether it is worth engaging in agricultural production in this country. The next stage of migration has begun, which has reduced the rural population from 1991 to 2009 by almost 17%. At the same time, it seemed that if the number of the rural population in Latvia began to fall, then, accordingly, the population of the cities had to grow, as in other countries. However, nothing like this happened in Latvia. The local population, after the Schengen borders were opened wide, began to search for a better life for themselves in the West in a steady stream.

After the last census to date, it turned out that the population of Latvia is about 2,2 million people (the level of the middle of the 50 of the last century). At the same time, Latvian citizens make up only 83,8%. In 1989, the number of inhabitants in Latvia was over 2,68 million people.

However, in Latvia itself, the results of the census, which are not so comforting for the country, are considered to be highly overstated. Many Latvian media outlets in 2011 (the year of the population census) published materials that are devoted to questionable methods of population counting. One of the topics for hot debate was the possibility of filling in accounting cards via the Internet. At the same time, the demographic services did not think up a reliable system of protection of personal information and protection against their re-registration. After conducting journalistic investigations by local media, it turned out that many citizens (including those interested in “growth”) entered their data several times, and the demographic services managed to distinguish themselves, taking into account even those who had already left the country for more than 10 years. After the publication of such scandalous data for Latvia, they began to say that in Latvia today there are no 2,2 million people living at all, but no more than 2 million. At the end of 2011, there was even a special adjustment made to the census data. The CSB published the result of 2,07 million, which showed the initial neglect of the fact of significant emigration. 2,07 million is exactly the demographic level that corresponded to Latvia in 1940-1944. Neither more nor less. Minus 70 years - hello, indicators of independence! ..

If we compare the data on the population of Latvia today with the 1989 indicators of the year, it turns out that over the years of independence, the number of inhabitants of the republic has decreased by almost 23%. This is a depressing indicator. Many may say that the reduction was recorded mainly due to the outflow of Russian families at the beginning of the 90-s to Russia, however, statistics show that not only Russians began to leave Latvia, but also representatives of other nationalities, including the Latvians themselves, who were trying to find more profitable jobs.

It would seem that Latvia’s accession to the EU, to which the country was led by Mrs. Freiberga, on the contrary, should have stimulated the local economy. But on the example of a number of countries in southern Europe, we know that you will not get far from ECB loans.

Freiberga went safely, but the loans on the Latvians remained, and most of them went to maturity. But in order to extinguish, you need to take money from somewhere. The funds, apparently, did not turn out, but on the threshold there was already a global financial crisis, which dealt a powerful blow to the Latvian economy.

The New York Times publication cites data showing that the economy of Latvia in 2009 collapsed by almost 18%. This indicator put Latvia on the last place in the world in terms of counteracting the global financial crisis. Last place in the world ... In other words, not a single country in the world has encountered a crisis with such economic helplessness as Latvia, which, since joining the WTO and the EU, thought that only Germans and French will work for it. At the same time, immediately before the arrival of a large-scale crisis, Latvia, according to the advice of European comrades, liberalized mortgage legislation, which led to the fact that in less than a year prices for Latvian real estate fell by almost a quarter, which led to the development of inflation to incredible values ​​for the European Union (17,9 % in year). The authorities of Latvia tried to follow the path of adjusting inflation, which led to the manifestation of deflation (almost in 4%). This caused a serious economic crisis in the country, and threw Latvia into one of the last places in the EU in terms of economic development.

The same Mrs. Freiberga, who has retired from big political affairs, now declares that the Latvian economy may even crack, because the chances that the Baltic republic will be in the euro zone in the near future are minimal, but if it does, it can go through the Greek or the Italian total lending scenario. At the same time, the ex-president for some reason does not say that, and who has dragged Latvia into a hopeless credit field, where there are impressive interest rates calling for repayment. Peculiar greetings from Vaira Vike-Freiberga, who reaped the glory of the great Latvian reformer, taking advantage of foreign loans.

If we compare the nominal values ​​of Latvian and, for example, Russian GDP per capita today, in Russia this figure is $ 13326, and in European Union Latvia - about $ 12200. At the same time, the state debt of Latvia in percentage terms in 3,5 is more than the national debt of Russia. But if Russia has, from which reserves it can be repaid, then here’s the state debt of Latvia, again. Today it can be repaid only through external borrowing, and this will eventually lead to an increase in debt. Some kind of vicious circle turns out ...

In general, the time from the day of the declaration of independence and the course towards a joyful and cloudless life under the wing of a united Europe for Latvia is passing, but somehow positive, at least outwardly, is not felt. Whether Latvia is somehow integrated incorrectly, or not all Western partners want to see it in their large and ceasing to be a cozy apartment. In general, before the arrival of the holiday of independence from Moscow, Latvia will still have time to remember and think about how “bad” life was under the Russian “invaders”.

Ctrl Enter
Noticed a mistake Highlight text and press. Ctrl + Enter
We are
Dreams of compensation. Latvian authorities are claiming 185 billions of euros to RussiaLatvia: "Hello, we are looking for invaders ..."
297 comments
Information
Dear reader, to leave comments on the publication, you must to register.