Gorbachev must answer for the death of the USSR 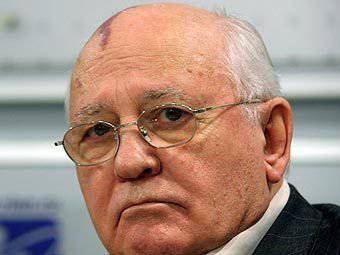 In August-December 1991, officials of the USSR, including senior officials, allowed actions leading to the collapse of the country. They did not take legal measures to preserve the state structure and territorial integrity of the USSR.

At the beginning of 1991, the question of changing the fundamentals of the constitutional system of the USSR (and therefore of its constituent republics) was submitted to a referendum held on March 17, 1991. The referendum decided to preserve the USSR as a single state (Decree of the USSR Supreme Council on March 21 1991 No. 2041-I “On the Results of the USSR Referendum 17 March 1991 of the Year”).

25 December 1991, the President of the USSR announced the termination of his activities as President of the country and signed Decree No. UP-3162 on the resignation of the Supreme Commander-in-Chief of the Soviet Armed Forces and transferred control of the strategic nuclear weapons not authorized by the Constitution and the laws of the USSR person.

December 26 The 1991 session of the upper chamber of the Supreme Soviet of the USSR - the Council of the Republics - adopted, under the chairmanship of A.Alimzhanov, the declaration No. 142-n on the termination of the USSR.

These acts are criminal on the basis of:

- n. “A” Art. 64 Criminal Code of the RSFSR - “treason, that is, an act deliberately committed by a citizen of the USSR to the detriment of sovereignty, territorial integrity ... USSR ... conspiracy to seize power” (the crime of the act is not eliminated by the law of the RF Criminal Code 278 provides for liability for the violent seizure or forcible retention of power, i.e., the objective side of this crime in the new Criminal Code is wider than in the previous one);

- Part 2 Art. 170 of the Criminal Code of the RSFSR - “abuse of power ... i.e., intentional use by an official of his official position against the interests of the service, if it is done out of selfish or other personal interest ... that caused ... grave consequences”;

- Art. 171 UK RSFSR - "the excess of power ... i.e. the commission of an official action, clearly beyond the rights and powers granted to him by law, if it caused significant harm to state or public interests ...".

Thus, a group of officials of the USSR, including the President of the USSR, in August-December 1991 deliberately, on the basis of personal interest, committed acts constituting an ideal combination of these crimes against the foundations of the constitutional system and state power. These crimes are over, the persons who committed them are not prosecuted.

In connection with the foregoing, on the basis of Art. 144 and h. 7-8 Art. 151 Code of Criminal Procedure, I ask you to determine the jurisdiction of consideration of this application (the preliminary investigation of criminal cases of crimes under Article 278 and 285 of the Criminal Code, attributed to the authorities of various authorities) and send it for consideration to the preliminary investigation authority determined by you.

And what did the Prosecutor General's Office answer? But she refused to initiate a criminal case against Gorbachev, because, they say, “there are grounds for reconsidering the issue of bringing M.S. Gorbachev and other officials are not held accountable. " And also did not forget to refer to the “integrity” of Gorbachev as the president of the USSR. Here is the answer of the Deputy Prosecutor General of the Russian Federation V.Ya. Grinya, who received Fedorov: 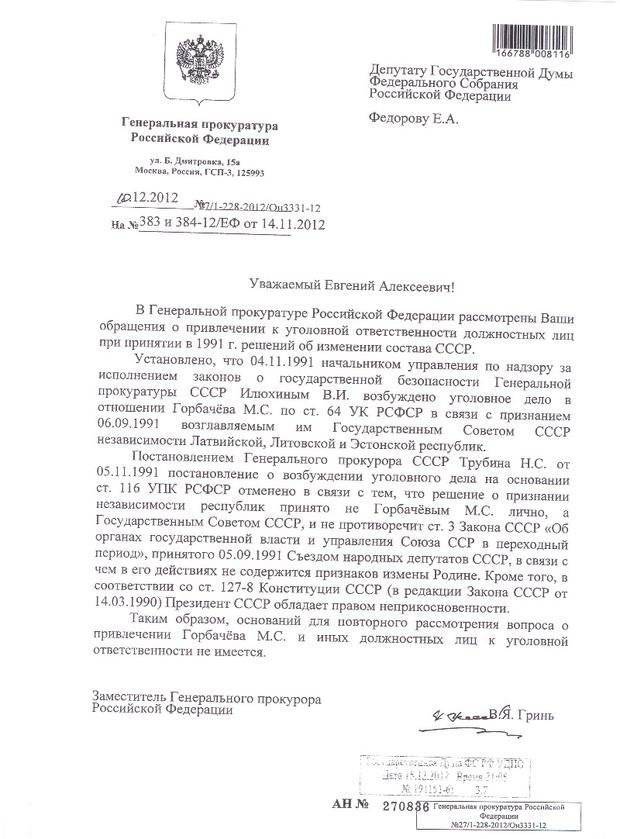 This dissatisfaction did not satisfy the deputy, and on December 18 Fedorov again addressed Yuri Chaika: 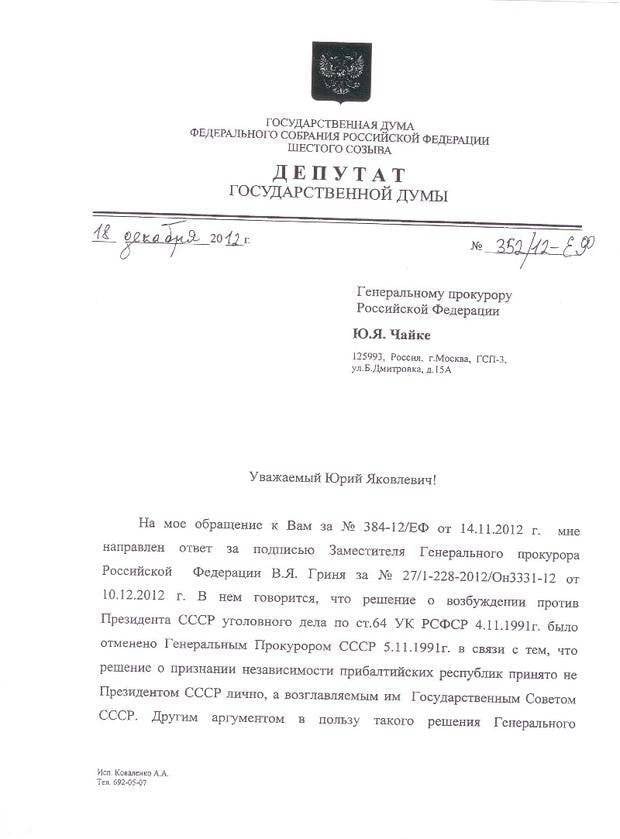 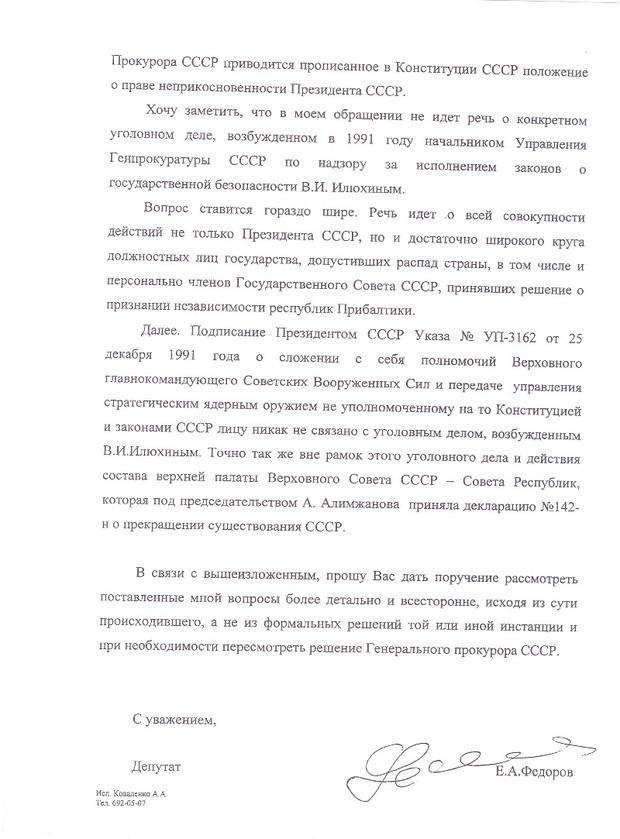 A decade has passed, and the prosecutor's office is still thinking. And it will almost certainly compose a response similar to the first. Well, we do not like the power to stir up the past, because she herself actually inherited it, being his successor ...

In the meantime, the prosecutor’s office is inventing his purely legal reply to Fedorov’s request, in which the deputy accused Gorbachev of what he had done for the collapse of the Soviet Union (he released the Baltic republics from the USSR, resigned the commander-in-chief and transferred the “nuclear button”, designed the by semi-legitimate surroundings (the collapse of a great power), it would also be appropriate to recall that Gorbachev did NOT make for the salvation of the USSR. And for this - ignoring the guarantor of the Constitution of their direct duties - he too should be condemned.

Take, for instance, the climax of the process of disintegration of a great power, initiated by Gorbachev himself and his entourage, the signing of December 8 by Yeltsin, Kravchuk and Shushkevich of the Belovezhsk Accords.

KM.RU has already told how the former State Duma deputy of the third (2000-2003) and fourth (2004-2007) convocations Viktor Alksnis, arriving in December 2006 of the year at the invitation of President of Belarus Alexander Lukashenko to the residence "Viskuli", where these agreements were signed, he found the answer to the question that tormented him: why did it happen there, and not elsewhere?

“And I received an answer to my question,” Viktor Alksnis wrote recently, “when one of the current leaders of the state residence Viskuli guarding her as a lieutenant in December 1991, told us that Belovezhskaya Pushcha was chosen by a single criterion: next to the hunting estate, literally a few kilometers away, was the state border of the USSR. The signatories of the conspiracy had a plan of escape, including walking through the forest to Poland, in case Gorbachev attempted to arrest the conspirators. In addition, it turned out that as soon as the KGB leaders of the Byelorussian SSR became aware of the intention of Yeltsin, Kravchuk and Shushkevich to sign agreements liquidating the USSR, this was immediately reported to Moscow, including to Gorbachev. In Viskuli, special forces of the KGB of Belarus moved forward, surrounding the forest in the hunting residence area and awaiting orders for the arrest of the USSR liquidators. In response, Moscow was ordered to be in positions and wait for the team. But the team did not arrive ... "

The President of the USSR, who was simply obliged to cut off the Belovezhsky plot and was endowed with the appropriate powers for this, literally did not give a finger to save the power created by many generations of our ancestors. Gorbachev, it turns out, was worried only about how his friend Bush Sr. would evaluate what had happened. “Do you understand what you did ?! - Yeltsin Gorbachev yelled. - Do you understand that the world community will condemn you ?! What will happen when Bush learns about this ?! ”Yeltsin, however, immediately calmed Gorbachev: US President Bush, they say, is up to date.

After that, Gorbachev could only renounce power (although the way he did it was illegal, as Yevgeny Fedorov reminded the Attorney General of the Russian Federation). And on the eve of your abdication call the US president and say: “You can calmly celebrate with Barbara (Bush’s spouse. - Approx. KM.RU) Christmas. Tomorrow I resign. With the "button" everything will be fine. "

Should we not judge Gorbachev for criminal inaction? ..

Ctrl Enter
Noticed oshЫbku Highlight text and press. Ctrl + Enter
We are
Drug dealer Gorbachev. Stavropol case and some ten high-ranking corpsesValentin Falin: How and why Gorbachev forgave Yakovlev cooperation with the special services of the USA
Military Reviewin Yandex News
Military Reviewin Google News
178 comments
Information
Dear reader, to leave comments on the publication, you must sign in.