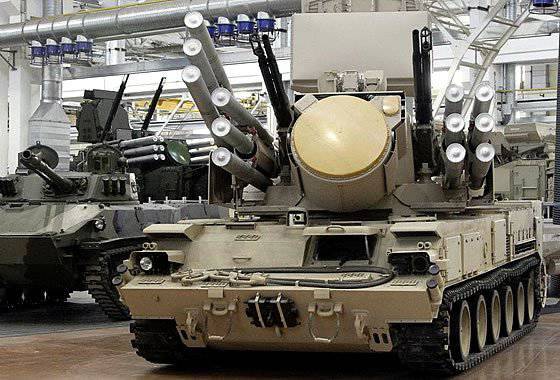 The 10 rating of the most significant contracts from the point of view of TSAMTO, concluded by Russia in 2012, includes the following programs for the export of defense products.

2. Contract with India for the supply of vehicle kits for assembling 42 Su-30МКИ

3. Contract with India for the supply of the second batch of Mi-17B-5 helicopters

4. Contract with China for the supply of Mi-52E helicopters

5. Contract for the first stage of development of the MTA multipurpose transport aircraft

6. Contract with China for the supply of the next batch of engines AL-31F

7. Contracts with India for the supply of Invar ATGM “Konvar” and “Konkurs-M”

8. Contract with the United States for the purchase of an additional 10 Mi-17B-5 helicopters

9. Contract with Indonesia for the supply of BMP-3F

10. Contract with Belarus for the supply of Yak-130UBS

In the second half of 2012, Russia and Iraq signed a number of contracts in the field of military-technical cooperation worth more than 4,2 billion dollars. There is no official data on the details of signed contracts.

According to the Vedomosti newspaper, the package included purchases of attack helicopters Mi-30HE and 28 ZRPK Pantsir up to 42. In the future, contracts for the supply of MiG-29М / М2 fighters can be concluded.

In October, the fact of signing a package contract was officially confirmed (without specifying details) during the visit to Moscow of Iraqi Prime Minister Nuri al-Maliki.

However, in the future around this transaction began to receive reports of its possible cancellation.

In November, Ali Mousavi, Iraqi Prime Minister Spokesman Nouri al-Maliki, announced that the contract was canceled due to suspicion of corruption. Despite the fact that Iraqi Defense Minister Sadun al-Dulaimi almost immediately disavowed the words of Ali Mousavi, questions remained about the deal.

Despite assurances from the Iraqi Defense Minister, Russia demanded official explanations from Baghdad. On the initiative of the Iraqi side of 12 December, a telephone conversation took place between Russian President Vladimir Putin and Iraqi Prime Minister Nuri Al-Maliki. According to the Kremlin’s press service, “the parties exchanged views on the implementation of the agreements reached during the visit of the Iraqi Prime Minister to Moscow in October 2012”. Details about the content of the conversation is not available.

Despite the uncertainty of the situation, this package contract is currently the largest in terms of value for Russia according to the 2012 results for the year and occupies the first place in the rating.

2. Contract with India for the supply of vehicle kits for assembling 42 Su-30МКИ

During the visit of Russian President Vladimir Putin to India 24 December, a contract was signed for the supply of technological kits for the licensed assembly of the 42 Su-30МКИ multipurpose fighter jets.

Airplanes, as before, will be assembled at the facilities of the Indian company Hindustan Aeronautics Limited (HAL).

The fact that the new fighters will be in the version of "Super Dry", as previously assumed, is not reported. Judging by the cost of the contract, India will be delivered the latest modification of the Su-30MKI, which are already being produced and are in service with the Indian Air Force (for the Indian Air Force, currently, about 170 Su-30MKI fighters of various "technical" are made).

3. Contract with India for the supply of the second batch of Mi-17B-5 helicopters

During the visit of Russian President Vladimir Putin to India 24 December a long-awaited contract was signed for the supply of the second batch of Mi-17B-5 helicopters.

As part of this order, according to reports, India will purchase a 71 machine (12 helicopters Mi-17В-5 for the needs of the Ministry of Internal Affairs and 59 machines for the Indian Air Force).

The cost of the option to purchase 59 helicopters Mi-17В-5 (in addition to the main contract for 80 machines, signed in 2008 year) was estimated at about 1 billion dollars. Taking into account the purchase of additional 12 machines for the Ministry of Internal Affairs, the cost of the contract signed by 24 in December amounted to 1,3 billion dollars, according to media reports (in the official press release of Russian Helicopters, the number of helicopters of the second batch and the cost of the agreement are not mentioned).

India ordered 80 Mi-17В-5 helicopters in Russia in 2008 for a contract worth 1,34 billion dollars. Delivery of all 80 helicopters under this contract is scheduled to be completed in 2013 year (possibly at the beginning of 2014 year). The delivery of the second batch of helicopters is scheduled for completion in 2015.

4. Contract with China for the supply of Mi-52E helicopters

Rosoboronexport OJSC and the Chinese company Poly Technologies in August 2012 signed contract documents for the delivery of X-NUMX Mi-52E helicopters to the PRC.

Helicopter shipments are scheduled for 2012-2014 years. Under the terms of the contracts, the first 8 units. Mi-171E is scheduled to be transferred to the Chinese side in 2012, the remaining helicopters are expected to be delivered in 2013 and 2014.

The contracts were signed in the development of an agreement concluded by X-NUMX, the Russian Helicopters holding company and the Chinese company Poly Technologies, for the delivery of X-NUMX Mi-2009 helicopters to China. The successful completion of this agreement in 32 laid the foundation for the development of cooperation with Poly Technologies in the purchase of Russian-made helicopters.

The cost of the contract for the supply of China 52 Mi-171 helicopters exceeds 600 million dollars.

5. Contract for the first stage of development of the MTA multipurpose transport aircraft

The contract for the first stage of the development of the MTA multipurpose transport aircraft took place in New Delhi on October 12. The contract was signed between the Russian-Indian joint venture MTAL - the customer, the Indian corporation “Hindustan Aeronautics Limited” and the Russian company JSC OAK-TS — the contractors.

The signing of this contract gives an official start to the design work according to the terms of reference approved by the MI of India and the MOS of Russia and opens financing of these works. Control over compliance with the requirements for the aircraft at all stages will be exercised by representatives of the ministries of defense of both countries.

6. Contract with China for the supply of the next batch of engines AL-31F

At the beginning of 2012 of the year, Rosoboronexport signed a contract with the Chinese Ministry of Defense to supply the next batch of X-NUMX aircraft engines AL-140F worth around 31 million dollars.

7. Contracts with India for the supply of Invar ATGM “Konvar” and “Konkurs-M”

In early November, India and Russia signed two contracts for the supply of the Indian Army Invar and Konkurs-M to the Indian army.

The Indian Government Security Committee (CCS) on October 18 approved the allocation of 20 billion rupees (about 370 million dollars) for the purchase of 10 thousand ATGM “Invar” (9K119M “Reflex-M”) for tanks T-90S.

In this case, all the Invar ATGM of this party will be supplied by Russia. According to the plans, the next contract for the production of additional 15 thousand. Invar ATGM provides for the creation of a joint venture for the licensed production of ATGM at Bharat Daynemiks Ltd. facilities in India.

A week later, on October 25, the Indian Government Security Committee approved the allocation of 12 billion rupees (about 223 million dollars) for the production of another batch of 10 thousand Konkurs-M ATGM for the mechanized infantry units of the SV of the country.

This is the second agreement on the production of Russian ATGM for four years.

As TSAMTO reported earlier, in 2008, a contract was concluded for the continuation of licensed production around 4 thousand ATGM "Konkurs-M". The manufacture of Russian ATGM "Competition" is performed by the company "Bharat Daynemiks Ltd."

According to the plans, at that time it was planned to purchase about 15 thousand. Competition-M ATGMs with a total value of 13,8 billion rupees. Apparently, the current order is an option to the contract from 2008 year.

8. Contract with the United States for the purchase of an additional 10 Mi-17B-5 helicopters

The US Department of Defense 18 July announced the signing of the command of the US Army with Rosoboronexport contract with a fixed cost of 171,38 million dollars for the supply of Mi-17В-5 helicopters for the AF of Afghanistan (the procurement is financed by the USA).

The agreement is in addition to the existing contract and provides for the delivery of another 10 Mi-17B-5 helicopters.

The original contract entered into in May 2011 of the year provided for the supply of X-NUMX helicopter Mi-21-17, spare parts and equipment (deliveries under this contract were completed in 5 year).

The base contract included options for the supply of up to 12 additional machines. The first option for the supply of two Mi-17B-5 US implemented in February 2012 year to replace the machines lost due to accidents.

Thus, currently 33 new cars have been ordered for Afghanistan.

The day after the contract was announced, the House of Representatives of the US Congress (19 July) approved an amendment to the country's defense budget for 2013 f., Prohibiting the Pentagon to make deals with Rosoboronexport, including the purchase of helicopters for Afghanistan.

Later, on December 3, this amendment was approved by the US Senate.

The ban will come into force if US President Barack Obama signs the defense budget law with this amendment. That is, the implementation of the program to supply an additional batch of helicopters for the AF of Afghanistan is in question.

9. Contract with Indonesia for the supply of BMP-3F

In May, the Indonesian Defense Ministry signed a contract with Rosoboronexport worth 114 million for the supply of 37 BMP-3F for the Marine Corps of the country's Navy. The price of the contract includes the price of the BMP-3F themselves, their delivery, subsequent maintenance, personnel training, and the transfer of a number of technologies.

10. Contract with Belarus for the supply of Yak-130UBS

Note. The rating does not include the prospective contract with India for the licensed production of AL-31FP engines, as there is currently no official confirmation of this transaction. According to the Vedomosti newspaper, Rosoboronexport in October 2012 signed a contract with the Indian side for the amount of about 5 billion dollars, providing for licensed production in India from Russian components to 970 of the AL-31FP engines for the Su-30MKI fighter jets before the 2030 year .

Due to the lack of official confirmation, this program TSAMTO classifies so far in the category of "intent". In general, according to TSAMTO, in view of the large number of Su-30MKI fighters in the Indian Air Force, this issue is topical and the Indian side, sooner or later had to turn to Russia with such a proposal.

Ctrl Enter
Noticed oshЫbku Highlight text and press. Ctrl + Enter
We are
Russia firmly occupies a place in the global arms market 2 and will maintain its position in the foreseeable future.As part of Vladimir Putin’s visit to India, a number of large MTC contracts are expected to be signed.
Military Reviewin Yandex News
Military Reviewin Google News
34 comments
Information
Dear reader, to leave comments on the publication, you must to register.