Killed outside the battlefield 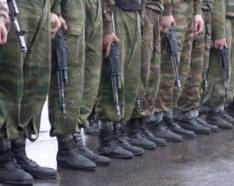 The Ministry of Defense has ceased to publish on its website data on the number of non-combat losses of the Russian army. In 2008, the military called the figure - 481 a dead soldier. However, according to the Union of Soldiers ’Mothers Committees, this figure did not include soldiers who died from injuries in hospitals or in civilian life. Injuries and wounds can be received both from suicides, accidents, non-statutory relations, and from the consequences, for example, of military actions in South Ossetia, but they do not fall on the list of non-combat losses. In addition, only half of the servicemen serve in the Ministry of Defense (there are also internal troops, border guards, the Emergencies Ministry, Rosspetsstroy, etc.). Given these "nuances", the Russian army loses 2,5-3 thousands of soldiers and officers every year without fighting.

In September, 2010, the parents of 19-year-old St. Petersburg resident Maxim Plokhov, through the Strasbourg court, accused Russia of violating the right to life. Their son died five years ago during the passage of military service in the 138-th motorized rifle brigade in Kamenka, known for numerous tragic incidents on the grounds of hazing. When Maxim was still alive, his parents repeatedly complained to the prosecutor's office - they scoffed at the guy. No reaction followed, and Plokhov soon died in hospital. Upon his death, eight forensic examinations were conducted, the results of which contradict each other. As a result, Maxim’s diagnosis was never officially established, although his colleague Alexey Dulov was found guilty of beating Plokhov by the Vyborg Garrison Court.

“We have no doubt that Maxim was killed, and the command and prosecutor’s office did not try to prevent this crime,” said Ella Polyakova, chairman of the organization “Soldiers' Mothers of St. Petersburg”. - Plohov's parents need to erect a monument. They understand that their son will not be returned, but they are trying for other guys who can be on the list of “non-combat losses” at any moment. Every year we are faced with barracks crimes that are disguised as suicide, or under coincidence. ”

Corporal Maxim Gugayev probably didn’t get on the list of non-combat losses at all - he died in the clinic of field surgery for chemical burns of the neck and hands, injuries to the ribs and chest. "Served" Gugaev in the private sector of a retired General Usichev, who regularly tortured a soldier and exploited him as a slave. Gugayev “presented” to Usichev the commander of the unit, Colonel Pogudin. Gugayev spent three weeks in intensive care, and at this time someone sent a telegram to his mother: "Mom, I'm fine."

Kirill Petrov, who, according to the military, shot himself at the post, had serious chest injuries. Pavel Golyshev, who was allegedly hanged himself, was told by his parents that he had shown suicidal abilities in school. Although a few days before his death, he looked joyful on the eve of vacation.

Army statistics show that suicides make up half of non-combat losses. In 2008, the 231 soldier committed suicide, and the entire 24 man was the victim of a non-statutory relationship. Alexander Kanshin, head of the commission of the Public Chamber for the affairs of servicemen, sees the main motive of suicides in adverse news from the home: those who have changed the girls, the sick parents, etc. And calls for increased spending on military psychologists, whose performance today is extremely low. However, the response of the Union of Committees of Soldiers' Mothers, Valentin Melnikov, does not remember a single case of suicide because of girlish treason, but because of the criminal negligence of the command - as many as you like.

“Once we received information that in one of the St. Petersburg parts of one of the conscripts colleagues regularly rape,” recalls Ella Polyakova. “When we arrived at the unit, the commander gave us the sacrifice — that is, he knew.” In another case, the escaped soldier said that there was a co-worker in the unit he left, who constantly cries and tries to commit suicide at the first opportunity, but the command of the unit does not take any measures in this connection. The information was confirmed, the boy was in charge, although doctors do not guarantee him to return to a normal life. ”

According to activists, in the legendary Pskov Airborne Division, they use their method of prevention with shoots and suicides. A paratrooper is handcuffed to a guilty hand with a double-weight dumbbell. And if a decisive correction does not occur, then the soldier may well end up in a civilian (!) Psychiatric hospital in Bogdanovo.

The former paratrooper Anton Rusinov does not look like a laggard: under two meters tall, he came from the military family to the landing force himself. But as soon as the soldier began to receive at least some money for service, he became the object of extortion. Anything can become an occasion (in the army jargon “jamb”) - an unfilled bunk, a fast or, on the contrary, slow walk, etc. And when there is no way to get money, the soldiers either flee from the unit or commit suicide.

“After the second runaway in August 2009, I was detained by my mother in Vologda and taken to Pskov, severely beating along the way,” says Anton Rusinov. - When we arrived at the unit, I was covered in blood and abrasions, but I was taken not to the doctor, but to the company commander, who added a knife-knife to my head. Then Sergeant Kanash demanded 13 thousand rubles - he allegedly spent his money on gas when they were looking for me. Another 5 thousand demanded by senior colleagues. I could not have money, because my salary card was taken away. As a result, I wrote on the chest with paint “I am a criminal”. I have repeatedly thought about committing suicide. ”

Publication of information about the non-combat losses of the Russian army for 2008 year caused a flurry of responses in the press, most of which was full of negativity towards the military. During the seven years of the war in Iraq, the combat losses of the Americans amounted to 410 soldiers. Russia loses more due to accidents, suicides and hazing every year!

The Defense Ministry reacted to this cardinally: there is still no official information about 2009 for the year. Only separate data by region is known. For example, the command of the Leningrad Military District noted with satisfaction that in the parts of the North-West only 58 people died, which is five soldiers less than in the previous year. But human rights activists say that really little has changed. In June, 2010, in a military hospital in Pechenga, was beaten to death by conscript Artem Kharlamov. The command is in no hurry to talk about the reasons. It is quite possible that, according to formal signs, Artem will not be included in the statistics of non-combat losses, but in the report of military medicine.