The most likely threat to Vietnam today is the Navy, as well as the naval aviation China. In addition, the two countries have territorial disputes regarding the ownership of a number of disputed islands located in the South China Sea, in particular the Spratly Islands, which in the past have already caused military conflicts. Given these threats, the Vietnam Air Force is optimized to counter threats from the sea. At the same time, battered Su-22 fighter bombers armed with X-25 missiles still 30 years old cannot act as an effective deterrence factor. The need to hit targets at a considerable distance from its own coast forced Vietnam to buy Su-27 and Su-30 fighters armed with X-29 and X-31 missiles.

To patrol the waters in Vietnam, the Coast Guard, which is part of the Border Guard, was created in 2008 in Vietnam. In service, she received a patrol aircraft CASA C212-400. Currently, the headquarters of the Vietnamese Air Force is located in Hanoi and controls the integrated air defense network, which includes a number of echelons that are connected to each other by a data exchange system. The air defense system includes the 80 radar, the 24 of which are P-18 radars and are installed on the chassis of Ural trucks. All elements of the system are mobile, which allows you to deploy a radar system throughout Viet Nam, making it difficult to destroy. 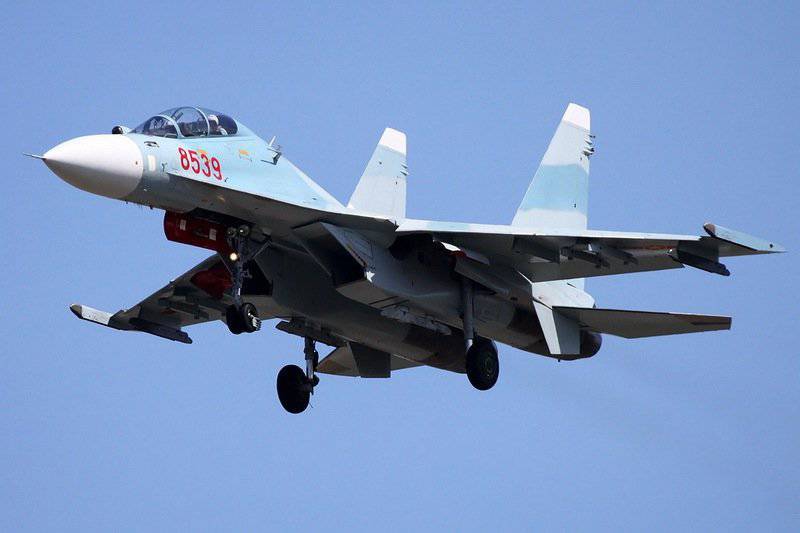 Fighter Su-30MK2V Vietnamese Air Force
In peacetime, most of the radar is located in the vicinity or on the territory of military towns, air bases, warehouses. Radars are associated with significant forces of the air defense system, which have about 3200 missiles of various types. From the Igla-S MANPADS to fully modern long-range air defense systems С-300ПМУ-1. In addition, the air defense units include more than 300 artillery anti-aircraft systems of caliber from 23 to 57 mm.

In Vietnam, there is a mandatory military appeal, all men who have reached the age of 18 must serve in the army for about 18 months. At the same time, those who want to continue their service may enroll in military schools, choosing them in accordance with their preferences. After graduating from college, cadets receive officer ranks and can continue military service. Every year about 3 000 people submit documents for admission to the University of the Air Force, while only 150 people pass this selection. Of these 150, only 1 / 3 achieves its goal and becomes military pilots.

The training of each fighter pilot lasts 5 years. The first 2 of the year with pilots is the study of the theory and political training, and the remaining 3 of the year pilots are engaged in practicing flight skills and practical exercises. The 920 training aviation cam Cam Rahn of Vietnam has 18 training aircraft Yak-52, as well as 10 licensed cars Iak-52 (released in Romania) were donated by Romania in 2009 year. On these machines, future pilots undergo their first flight training. 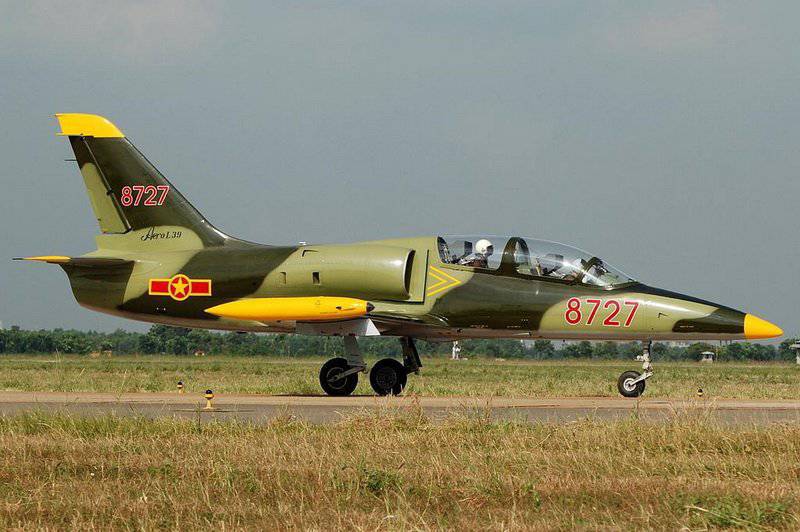 Combat training aircraft L-39C Vietnamese Air Force
After the successful completion of this stage, the cadets are sent on and transferred to Dong Tac airbase. Here is the 910 training flight regiment "Julius Fucik" and the Air Force Training School. The armament of this regiment is X-NUMX combat training jet aircraft L-23, on which future pilots undergo further in-depth training. These aircraft hit Vietnam in three batches. So in 39, the first L-1984C 24 was received, in 39-2002, more 2003 combat training aircraft were received, and in 10, the X-NUMX of the L-2008C aircraft was purchased. Thus, the total number of L-4C in the Air Force of Vietnam is 39 machines. In 39, Aero Vodochody was able to get a contract to overhaul two L-38C airplanes, as well as to supply the necessary spare parts for the machines from the rest of the fleet.

As soon as the cadets complete the initial and advanced training courses, they are assigned to the combat units. Those cadets who trained on transport aircraft and helicopter pilots start training or on Bell UH-1H Iroquois helicopters from the 917 helicopter regiment “Dong Tap” located on the territory of Tan Son Nhat International Airport, or on An-2 airplanes, which are in service with the 918 Hong Ha transport aviation regiment located on the Gia Lam air base. Currently, at least X-NUMX of An-8 aircraft is in a flying state here.

At the same aviation base, there is an An-15 military transport aircraft (the remaining machines from 26 aircraft that were purchased back in the 50-1981 year), as well as a PZL Mielec M-1984B Bryza 1R aircraft from 28. In 1, Vietnam acquired the 2005 of such aircraft, but one car was lost as a result of a flight accident. 2 CASA C3-212 aircraft of the Vietnamese Coast Guard was subsequently added to this aircraft. 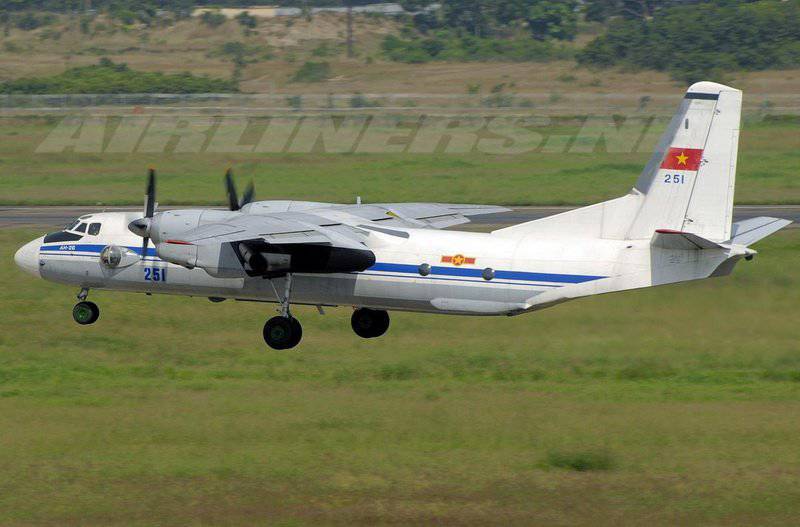 An-26 transport aircraft of the Vietnamese Air Force
Prospects

Today we can fairly accurately assume that the origins of the program of military modernization of the Vietnamese air force had the task of balancing Chinese military power, which, given the long-standing border disputes between Vietnam and the PRC, is still very relevant. In 1992, the Chinese Air Force received all the X-NUMX Su-1991SK / UBC fighters ordered in the 26 year. The conclusion of this contract was a kind of warning for the Vietnamese leadership, as a result of which, after just 27, Rosvooruzhenie was awarded a contract for 2 million dollars, which provided for the supply of 200 fighter jets Su-5SK and one combat training Su-27UBK. These machines were the first multifunctional fighters in the Air Force of Vietnam.

The cost of this contract also included the training of fighter pilots and ground personnel and technicians in the territory of the Russian Federation. In December 1996 of the year, a new batch of fighters was added to the first six of the Su-27, which included the 4 Su-27K and 2 Su-27SK. These aircraft were able to strengthen the defensive capabilities of the Vietnamese Air Force in the face of 22 Chinese fighters Su-27SK / UBK, which were obtained a year earlier.

At the same time, the threat from the Chinese Su-27 only increased. In December, the first J-1998 fighter jets were assembled in China, which were the licensed version of the Su-11SK. At the same time, the aviation company Shenyang Aircraft Company planned to manufacture at least 27 of similar machines. And in May, 200, the first flight of the Su-1999MKK fighter, which could use high-precision weaponunavailable for Vietnamese Su-27. Three years later, according to the requirements of the PLA Navy, a version of the Su-30MK2 fighter was created. One of its features was the possibility of using anti-ship missiles X-31, which put the sovereignty of Vietnam over the surrounding waters under great threat. Between February and March, the PLA Navy 2004 received the X-NUMX Su-24MX30 fighter. 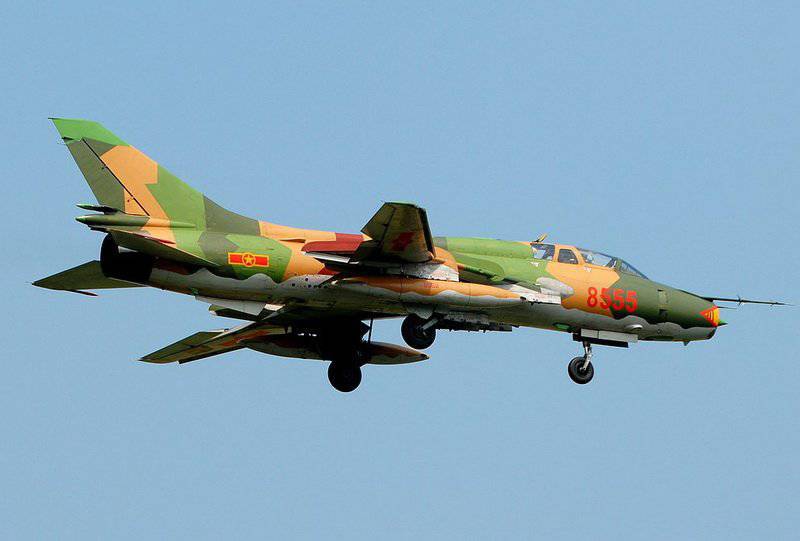 Fighter-bomber Su-22 Air Force of Vietnam
Soon, Russia realized that the market for sales of new Su-30MK aircraft could be expanded, primarily geographically. The People's Republic of China acquired Su-30MKKK / MK2, India Su-30MKI, and Malaysia acquired Su-30MKM. At the same time, a version for the Vietnamese Air Force was created. At the Russian plant, KnAAPO created a slightly modified version of the Su-30MK2, which met the Vietnamese requirements and received the designation Su-30MK2В. As early as December 2003, the first contract was signed for the supply of 4-x fighter data to Vietnam, the amount of the transaction was 100 million dollars. The aircraft were shipped to the customer after 11 months. After that, in January 2009, a new deal was finalized for the purchase of an additional Su-8MK30В 2, four of which were delivered to the customer in 2011 year. After another 5 months, a new order was received for the 12 Su-30MK2В fighters. Supplies under this contract are likely to be completed in 2013. The total amount of the transaction, including airplanes, weapons and ground equipment, will be about 1 billion dollars.

Currently, the Vietnamese Air Force is armed with more than 20 Su-27 / Su-30 fighters. At the same time, the Main Command of the Air Force has ambitious plans for modernization, which provide for the deployment of 4-fighter regiments armed with Russian Su fighters. The fighter data park is planned to be brought to 45 Su-27 / 30. These machines should become the backbone of the defensive and shock forces of the Vietnamese Air Force. However, if everything goes according to plans, another brainchild of the Sukhoi Design Bureau, the Su-34 bomber, may be added to these aircraft. So far, there are no orders for this front-line bomber, but the Vietnamese Air Force has a desire to replace the outdated Su-22 with modern vehicles. To use the Su-34 is planned mainly as a naval strike aircraft.

Currently, the most numerous aircraft of the Vietnamese Air Force are MiG-21 fighters, but their operation is scheduled to be completed within 5-10 years, after which they are planned to be replaced by other types of light fighters. Perhaps it will be the JAS-39 Gripen, which is already in service with the Thai Air Force. 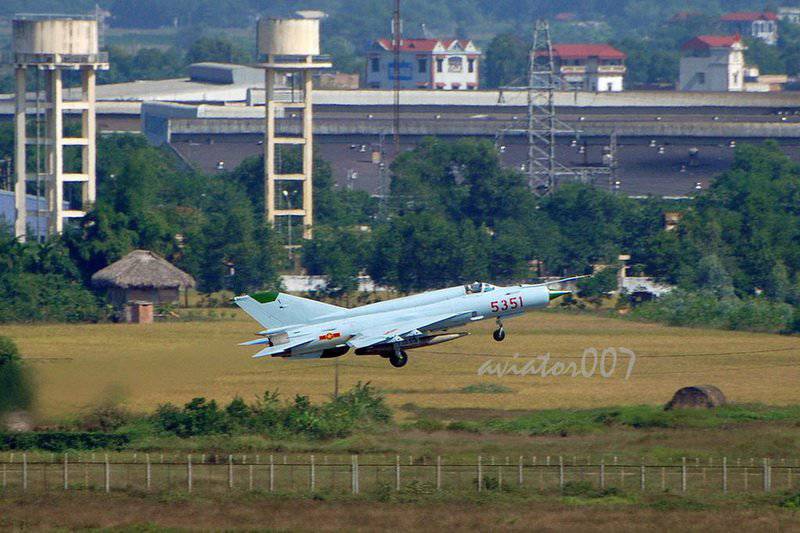 Fighter MiG-21 Air Force of Vietnam
At the same time, it is planned to replace the L-39 combat-training aircraft with more advanced machines - Russian Yak-130. It is precisely to the choice of Jacob that the government of Vietnam is currently leaning. In the period from 2015 to 2025, Vietnam expects to acquire 12 UBS Yak-130. However, this combat training aircraft of the in-depth training of flight personnel was not approved by the Vietnamese pilots, who in 2011 got acquainted and studied its capabilities in Russia. On this basis, in this segment there is a competitor in the face of an upgraded version of L-39 - L-159 ALCA. His chances of winning look quite preferable.

In addition, in order to take advantage of the conduct of network-centric hostilities and more productive confrontation with China, the Vietnamese air force is considering the possibility of buying at least 2-X AWAC planes. Not so long ago, the CASA EC-295 aircraft that appeared could attract the attention of the Vietnamese Air Force.