Experts argue how to replace the aging "Satan" 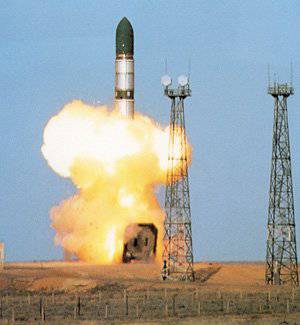 Hot news, as often happens, come to us from overseas. “The decision to create a new intercontinental ballistic missile, which will replace the PC-20 or Р-36МУТТХ and Р-36М2" Voivode "(according to the western classification SS-18 Satan -" Satan "), has not yet been made." This was announced in Washington at the International Luxembourg Forum for the Prevention of Nuclear Catastrophe by the former Chief of the Main Staff of the Strategic Missile Forces, Candidate of Military Sciences, Professor of the Academy of Military Sciences, Colonel-General Retired Victor Yesin.

According to the general, “it is possible that such a rocket will appear, but there is no definitive solution yet, as long as there is a task to conduct research work.” Viktor Yesin suggested that “the results of these studies will determine the appearance of the new rocket, after which a decision will be made on the expediency of its creation based on the development of the military-strategic situation. With a positive result, the quantitative need for products will be clarified. ” In addition, the expert added that "the development of such a heavy rocket weighing 211 tons will most likely not be conducted, its creators will be able to stay on an intermediate version."

Such a detailed story of Victor Esin about the new rocket, which should replace the “Governor” (“Satan”), is explained, in our opinion, by several circumstances. The first of them is purely objective. The world's largest liquid heavy missile systems R-36MUTTH and P-36М2, equipped with a split head part with ten warheads each 750 kilotons and a system for overcoming the most modern and promising missile defense, are on duty in our country (in the cities of Dombarovsky and Uzhur) for over 20 years.

According to open data, as of July of this year, only 58 units remained (before the reductions under the START-1 Treaty were 308). In the coming years before 2020, they must go to history according to the age. Most of those that are on duty now have already overcome warranty and extended deadlines, which are defined by their technical passports. The fact that they do not pose any danger to the personnel serving them and are in absolutely working and operational condition is shown by regular launches of these missiles from the landfill in Baikonur, as well as the launch of satellites of the “civil” rocket Dnepr, which practically represents the Voevod "(" Satan "), removed from combat duty.

But it’s impossible to keep these rocket complexes in battle forever. Like every living creature (and a strategic rocket is a living creature, no matter how thoughtful and paradoxical these words may be to someone, - VL), they have a deadline. He approaches his logical outcome. Moreover, the duration of stay on duty and other domestic strategic missile systems - liquid ballistic missile UR-100NUTTH "Sotka" (according to the western classification SS-19 Stiletto), are in line with the logical outcome, today we have 70, and there were 360, they are deployed in Kozelsk, Kaluga Region and Saratov Tatischev. And also they are approaching the end of the warranty period on combat duty and solid-fuel ground-based strategic missile systems RT-2PM Topol (according to the western classification SS-25 Sickle - Sickle), we still have 171 units in them, deployed in Yoshkar-Ola, under Nizhny Tagil, Novosibirsk, Irkutsk, Barnaul and in Vypolzovo, Tver region.

If we take into account that almost half of 605 strategic missiles that we currently have in combat formation will be dismissed in the coming years, then the concern of the military and the country's leadership is understandable. Not only because we have to fulfill the Prague Treaty (START-3) with the USA, according to which we can (should), like the Americans, have 700 unrolled carriers and also 100 in warehouses. The question is sharper. With strategic missiles, we are a great country, who either does not want, but has to reckon with. Without them - only a raw materials appendage. Whether the West, or the East.

But with the replacement of "Governor" ("Satan"), as well as "Weave", all is not well. In the leadership of the military-industrial complex, there is a struggle over which missiles to replace the outgoing P-36М2 and УР-100НУТТ - with liquid or solid-fuel ones. Behind each of these groupings are renowned design bureaus and many thousands of production teams that, in spite of everything, are still working. Although with a creak. Liquid propose to almost revive the "Satan": they say, the first and second steps can be done again at the Dnepropetrovsk plant "Yuzhmash", where they used to make Р-36, and the rest of equipment - warheads, breeding systems, etc. - in Russia.

True, the problem is that according to the Lisbon agreement of the beginning of the 90-s of the last century, signed by the USA, Russia, Ukraine, Kazakhstan and Belarus, none of these countries, except Russia and the USA, can make strategic nuclear missiles. And "Yuzhmash" in the first place. To take and get out of this contract, as some suggest, is a very risky step. Whether Ukraine is ready for it is a big question. To transfer the creation of a heavy or medium ground-based liquid rocket to Russia - here too there are difficulties of which we must speak separately. So says the former general designer of the UR-100NUTTH, the winner of the Lenin and State Prizes Herbert Efremov.

Russia also has multi-headed solid-fuel missiles, besides the long-suffering marine RSM-56 “Bulava”, which is not flying yet, the PC-24 ground-based missile system, which took up combat duty in December last year. There are also one-piece mine and soil rocket complexes RT-2PM Topol-M (SS-27). Their current date is 67. But these missiles are still unable to completely solve the problems of the Prague Treaty, and the guaranteed security of Russia.

It is important to spend 19 trillion. rubles, which allocates a budget for the State Armaments Program for 2011 – 2020 years, so that all those problems that Colonel General Victor Esin are talking about and Academician of the Academy of Military Sciences Herbert Efremov are resolved. Whether this will turn out for the military and political leadership of the country, as well as for our designers and production workers, is a big question.