Stalin: memories of the future 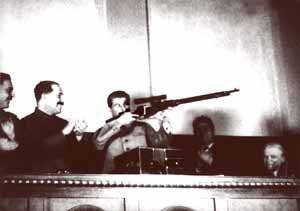 Stalin is relevant not only on significant dates. It is always relevant. And every day more and more.

Is it not surprising that after 133's, since the birth of this person, the name under which he entered history, continues to cause concern, endless debate and discussion? It would seem that the era that gave birth to it is gone, and the new time that he threw forward has long since become old. We do not feel, do not understand this time, his iron breath, his mechanical tread. We grew up in a different world, where we no longer believe in revolution and socialism, where sincere enthusiasm was replaced by complete apathy and an insignificant giggle. The society has changed, the era has changed, the country created by it, therefore any direct appeal to Stalinism as the ideological system that took shape during the reign and thanks to Stalin, is now irrelevant. As a living person of blood and flesh, with his thoughts, feelings, he remained there, and we are unlikely to understand him and the people of his time, the cruel times of strong people. His USSR remained there with a Victory and repression, with the tragedy of the Russian peasantry and the atomic bomb, with pain and pride for their country, with the determination to live and fight further. Stalin is gone. But something remains. It's time to understand that.

We are dealing only with the image of Stalin, projected onto a real person, a social construct that is created here and now, by us and our contemporaries. We cannot but comprehend the world, including the events of the past, on the basis of the existing structures and procedures for understanding man, society, and the world. And these structures are not generated by a separate human consciousness, but by society as a whole. Any understanding is an interpretation of facts, any history is only an interpretation and, if you like, a myth. After all, the criteria themselves are changing for what to consider as a fact, what sense to invest in this concept, how to select these facts and, finally, which of the billion events to direct attention to, and which not, etc. If our society is ready to talk and argue about Stalin, then this figure acts as a marker and symbol of existing social trends and expectations. Who is Stalin now? Stalin is not the past, it is the present and the expected future. Stalin is actualization, a visible manifestation of the mythological structures of the Russian, the painful reaction of the Russian unconscious to the deadly virus of liberalism. Stalin is a longing for a strong state, associated with the difficulties and hardships of life in a great empire.

Stalin is a myth about truth, without which the “state will not stand,” this is the eternal Russian dream of a time when they will live in justice, in an atmosphere filled with faith and hope, clothed in the image of memory, this is the myth of the fearsome Tsar-father, the myth of retribution and punishment, In the Stalinist myth find their place and traditionally characteristic of Russian society, ideas about power, the state, the figure of the king, ruler, the relationship of the sovereign and the people, sovereign and elite, by the way, and the traditional disputes for Russia on all these issues too react ulizirovannye and cling to the image of the leader as a significant symbol for all. Why was he destined to play this role? To answer this question is to unravel the mystery of a great personality, of what made it great, which is hardly possible. The eternal and the modern converge in the image of Stalin together.

The myth is what should interest us, in the myth of Stalin two lines intersect more clearly than ever, one is the idea of ​​a “people's king,” a formidable and just one, the king-patron, punishing the presumptuous elites. The second is the elites' fear of punishment, justice, the prospect of losing everything that “has been acquired by overwork”. The advocates of Stalin only about the first component of the myth, about Stalin, which the people are waiting for, about the type of leader who so corresponds to the national archetypes that he cannot but materialize, and forget about the second. Elite, or to be honest, the rabble, which takes the place of real elites in Russia, is also waiting for Stalin. And for them he is more alive than all the living, he embodies the fear of punishment and the awareness of his own wrongness, the fear and premonition of retribution that will come from the people despised and longing for the "Kremlin highlander" people. How else to explain more 20-years going "de-Stalinization"? With the dead do not fight, especially for so long. De-Stalinize, then wait, De-Stalinize, it means they have a presentiment. They, too, without realizing, bring the materialization of the archetype closer, see the revived ghosts of the past in the future, tensely awaiting retribution.

If overbearing boyars struggle with the king, then this king is real and the people will go under his banner. It is impossible not to feel the hatred and anger that is spread in the masses. Fighting the ghost of Stalin is a sure way to bring your own end closer, to arouse the spirit of revenge. Both this government and the opposition, if they are swept away, will be swept away by the force that makes the image of Stalin so relevant. The whole rush of “de-Stalinization” is an example of extreme thanatophilia, look with what gusto our liberals describe repression, torture, executions, they enjoy grim scenes and prophesy, they call, they can predict.

Surprisingly interesting and somewhat ominous, but not at all in a liberal sense, the interpretation of Stalinist Russia is given by Karl Schmitt. In his work 1939 of the Century of Neutralization and Depoliticization, he defines post-revolutionary Russia as a technological country fascinated by technology, a country based on which the anti-religion technology was introduced, the activist metaphysics of the material world.

The USSR created a brilliant technique and an insignificant philosophy (not counting Losev, a man from another, clearly not the Soviet world). The first attempts of the Russian religious philosophy to think in Russian were crushed by reinforced concrete slabs that terrified Western Marxists of official "scientific communism." Socio-humanitarian sciences and philosophy seemed something unimportant and insignificant, at best an outlet for dissident intellectuals. The heroes were other people, techies, military, astronauts. Deprived of this ideological framework, deprived of its own philosophical project, the Soviet Union collapsed as soon as Marxism mutated on Soviet soil decided to "return to its roots." However, the magic of numbers, numbers, technicalist calculating reason survived the Stalinist project and comfortably unfolded in liberalism by the dictatorship of economists, financiers, happiness from seeing new gadgets, all the same rampant faith in progress.

Is there not now in the Stalinist myth of this former intoxication with technology, factories, the greatness of power, atomic bombs, as an end in itself? Is the most important question, the question of purpose and idea, of principles of a spiritual and superhuman character, lost in the general wave of state-oriented reasoning? The technicalist, titanic optimistic spirit of the Stalinist project, like any project of modernity, precedes and prepares the way for the logistics triumph of technology in the modern world, where it replaced everything, and of course ideas and policies. The uprising requires a completely different concept, anti-modern, existential, radical, and other heroes. If they are needed at all.

Leaving aside Schmitt's fears that this dark force will be able to subdue Europe (like any European he was a Eurocentric), we also note his admiration for self-reliance of the Stalinist empire, its calmness and ability to see conflict behind the curtain of neutrality, live this conflict, live politics . Schmitt sees Russians as referring to the images of Weber from the “Protestant Ethic” of the new “ascetics”, who are able to discard the comfort of the present in order to gain control over the future. And criticism and tribute must be comprehended.

Understanding Stalin not as a past, but as a future, will require an answer to this last question. We will be required to resolve the most important problem, to understand what could be the idea that will force the Russians to start fighting for power over the future again, what will express this confidence and power, what a truly new metaphysics will make itself known by a new, Russian breakthrough there, for the brink of the unknown and dangerous.