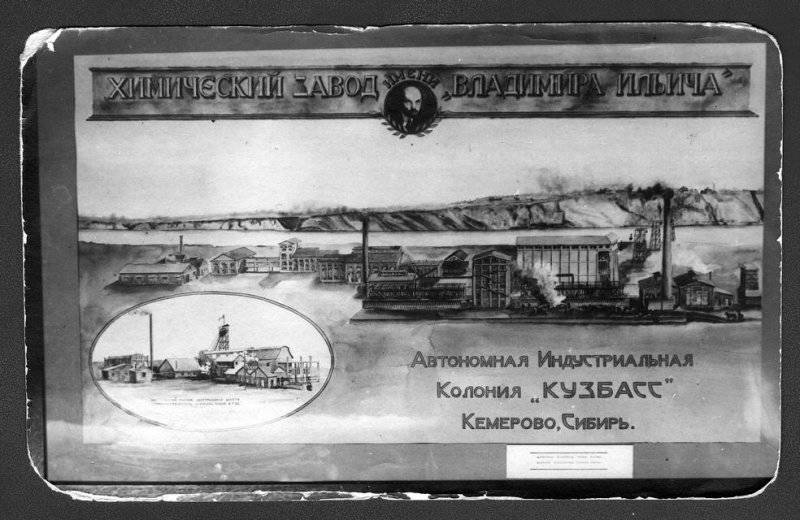 In August, 1918. Lenin wrote the famous “Letter to the American Workers”, in which he called on them to help create the economic base of the new working state, because “the economic crisis is so deep that it is possible to restore the destroyed economy without equipment and technical assistance from abroad Russia cannot. " "The committed, energetic, advanced workers of America will lead all the workers from a number of industrialized countries carrying Soviet technical know-how, their determination to deprive in order to help the workers 'and peasants' republic recover their economy."

Residential building for colonists Sausage, designed by Van-Lokhem, built in 1920. 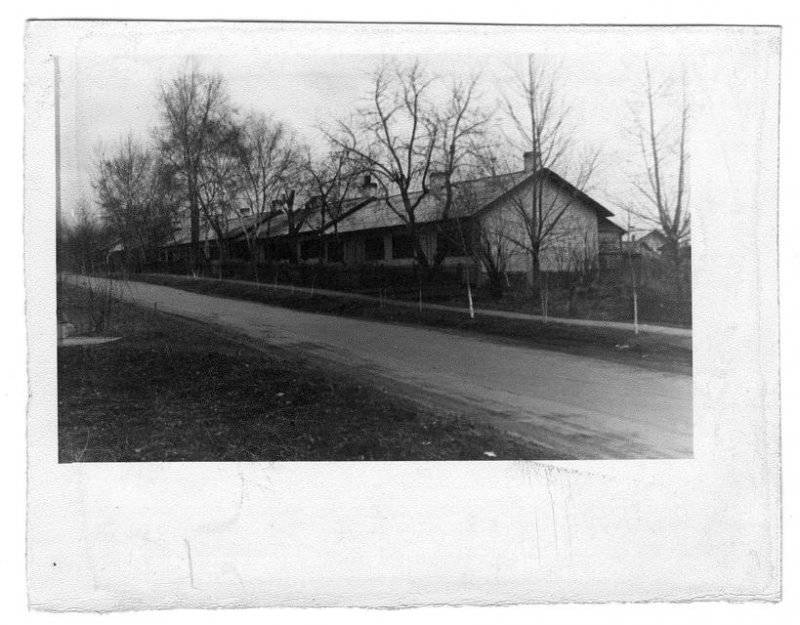 The project for the rapid recovery of the Russian economy was developed by delegates of the Congress of the Comintern, held at 1921 in Moscow. The Dutch engineer S.Rutgers and the Americans S.Kalvert and William Haywood suggested creating Industrial Labor Colonies in the most important economic regions of Russia with the participation of foreign workers and specialists. Using foreign technology and advanced technology, they will be able to revive the industry in these areas in a short time. The project received the support of Congress and the Soviet government.
Coke plant. 1920 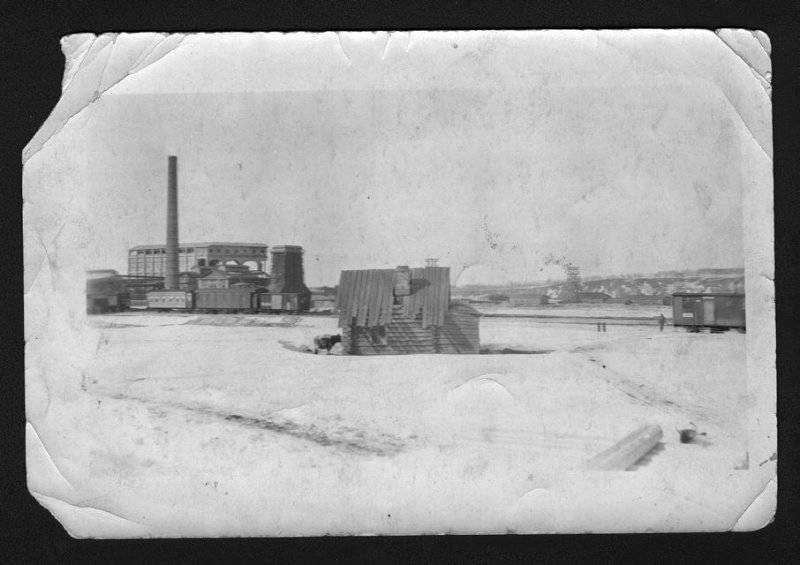 At the end of 1921, the first such industrial colony was established in Kuzbass - AIK Kuzbass, a Soviet state-owned enterprise, to which the Kemerovo mine and an unfinished coking plant were transferred (in 1924, enterprises in the south of Kuzbass were additionally transferred: Leninsk-Kuznetsky, Prokopyevsky, Kiselevsky mines and Guryev Metallurgical Plant).
The creation of the colony took place simultaneously in Russia and abroad. 2 opened overseas representative offices of AIC in New York and Berlin, whose task was to recruit colonists and purchase equipment. AIC's US bureau was located in the center of New York on Broadway, it opened 30 AIC support centers in the mining regions of the United States and Canada.
On board the steamer "Rotterdam", the fourth group of Dutchmen. 1923 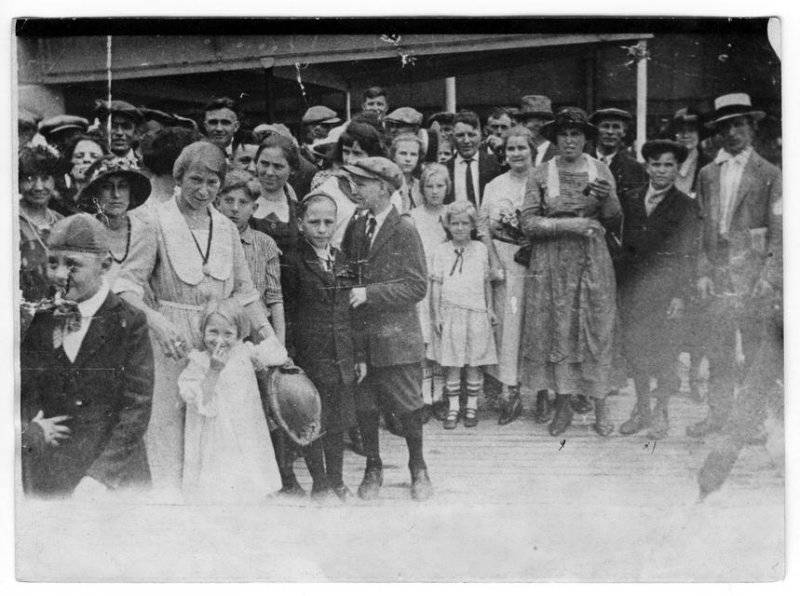 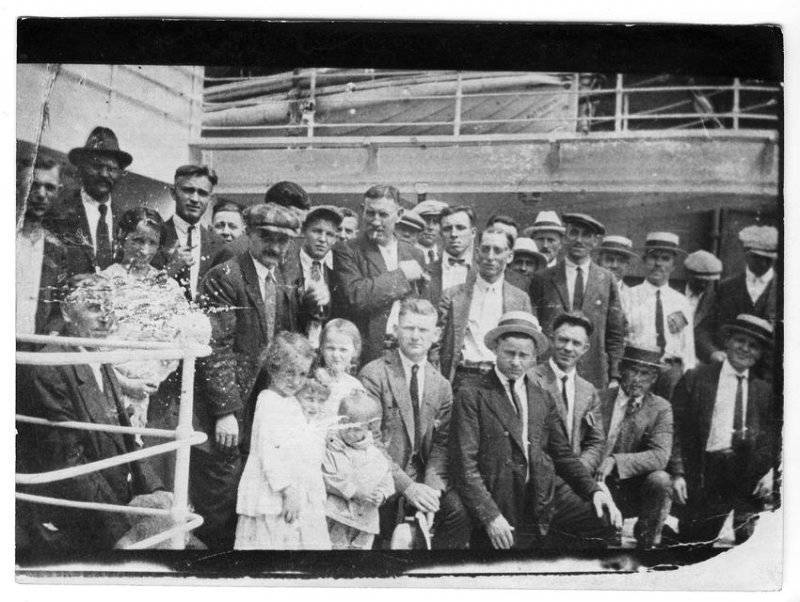 A total of 753 people arrived from AUK Kuzbass from abroad (635 adults, the rest of the children). People of more than 30 nationalities worked at AIC. The largest national groups were (in descending order): Finnish, American, German, Russian (from pre-revolutionary Russian immigrants, but with American citizenship), Dutch, Yugoslav. Most foreigners occupied engineering positions, as well as highly skilled workers. There were about 5 thousand of indigenous Russian workers in the colonies.
Coke plant. Electrochemical shop. Kemerovo, 1923 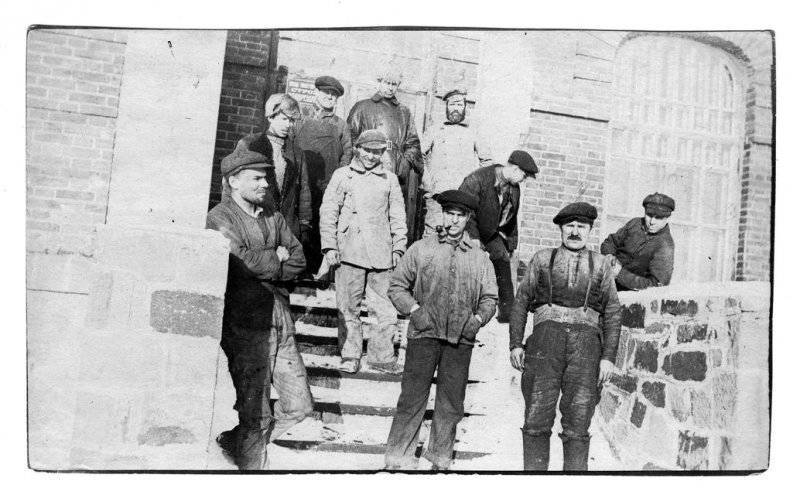 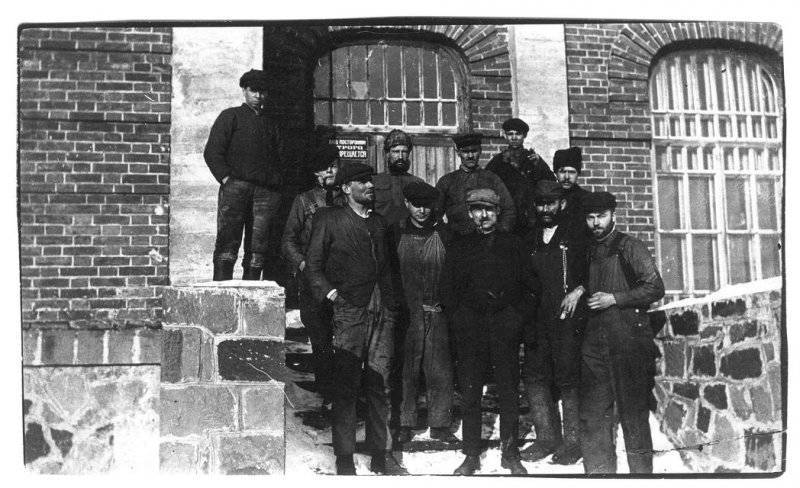 Unlike the concession enterprises of that time, the Kuzbass colony was on a completely different footing. To begin with, the backbone of foreign specialists was made up of representatives of extreme left-wing parties, mostly anarcho-syndicalists (not surprisingly, Trotsky provided patronage for the colony). So, the founder of AIK "Kuzbass" was an American of Dutch origin Rutgers Sebald Justus. despite American (previously Dutch) citizenship, he has been a member of the RCP (B.) since 1899. By training a hydraulic engineer. 1915 to 1918 He lived in the United States, became close to the Bolshevik emigrants (including Trotsky), and participated in the activities of the international League of Socialist Propaganda. With the mandate of the "League" he left (via Japan) to Vladivostok. I met with V.I. Lenin, was appointed inspector general of waterways, participated in the work of the 1-th Congress of the Comintern, secretary of the Anglo-American group of the RCP (b).
International rally. 1923 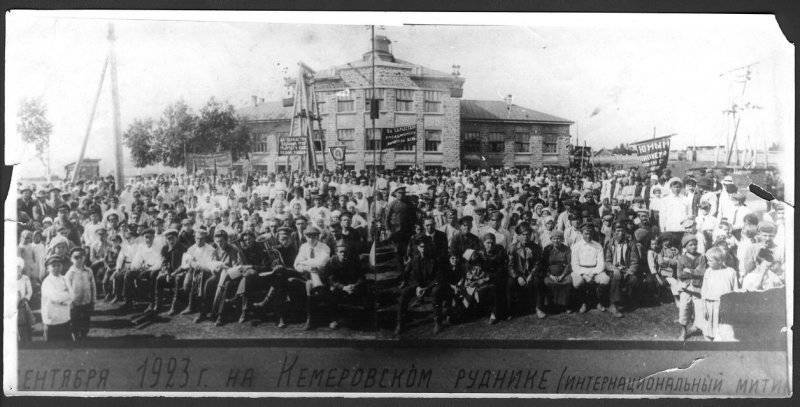 The trade union "Industrial Workers of the World" (IWW) emerged in the US in 1905 as a counterweight to the American Federation of Labor (AFL), which pursued a policy of class collaboration. The IRM included both traditional socialist and anarcho-syndicalist elements, the latter soon becoming the dominant force. The main method of struggle was combining the IRM with moderate “direct actions” - sabotage, strikes, and a general strike. The latter was a kind of symbol of faith for the IRM. The IRM Union believed that after victory (with the help of a general strike), the working class would immediately start organizing a new free industrial society, in which the entire economic life would be managed by industrial unions. The traditional political struggle, including the parliamentary one, was denied by the IRM.
AIKovtsy. Kemerovo mine, 4 July 1923 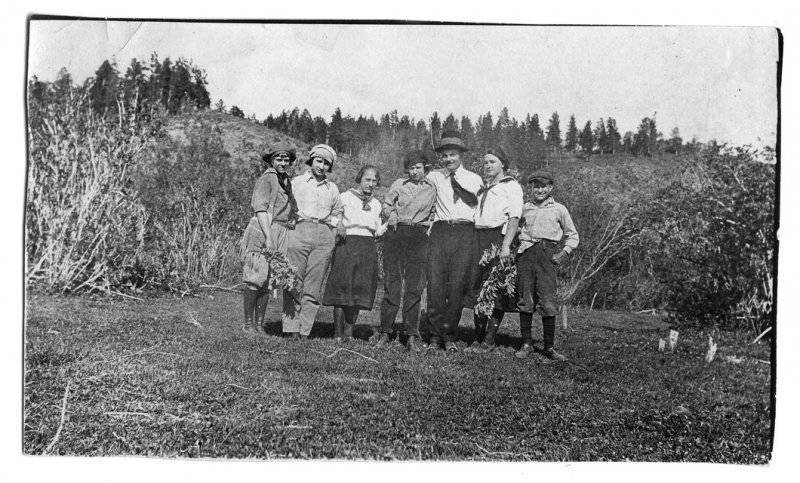 The leader of the Russian Americans was the famous anarcho-syndicalist Vladimir Shatov. In the revolutionary movement, he was listed with 1903. In 1907, he emigrated to the USA, where he became a member of the IWP trade union, where he led the Russian branch. In 1917, he returned to Russia with Trotsky.
AIC members of the Komsomol before leaving to study at the Tomsk Party School. Kemerovo mine, 1923 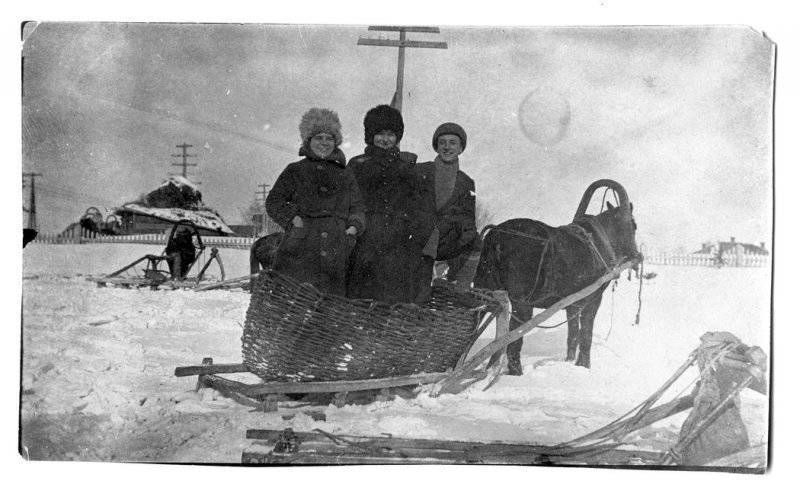 Of the 635 foreigners, 200 was a communist (for example, in March 1923 was an American squad of the Kemerovo organization of the RCP (B.) Had 73 people). Around 250, the colonists who arrived in Kuzbass were anarcho-syndicalists, members of the IWW.
The Soviet government allocated colonies in 1921, 600 thousand rubles in gold. for the most part this money went to purchase equipment. Initially, the collective agreement stated that the equipment should be procured at the rate of 100 dollars per employee, then this figure increased to 150 and 200 dollars. However, 50% of the cost of equipment was spent on transportation. Transportation in general was the weakest point in the colony: for example, cargo from the USA to Kemerovo went from 50 to 60 days. Several times the necessary equipment did not arrive due to the termination of navigation.
House AIKovtsev. Kemerovo mine 1923 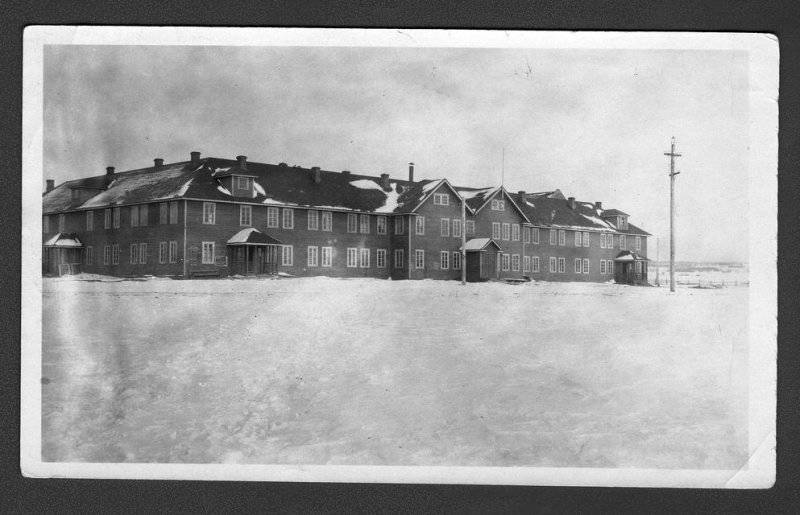 More on 100 dollars for each was supposed to fall on the food supply of the colonists. At first, since it was planned that after a year they would begin to provide themselves with food.
Coke plant. Official opening. Kemerovo, 13 March 1924 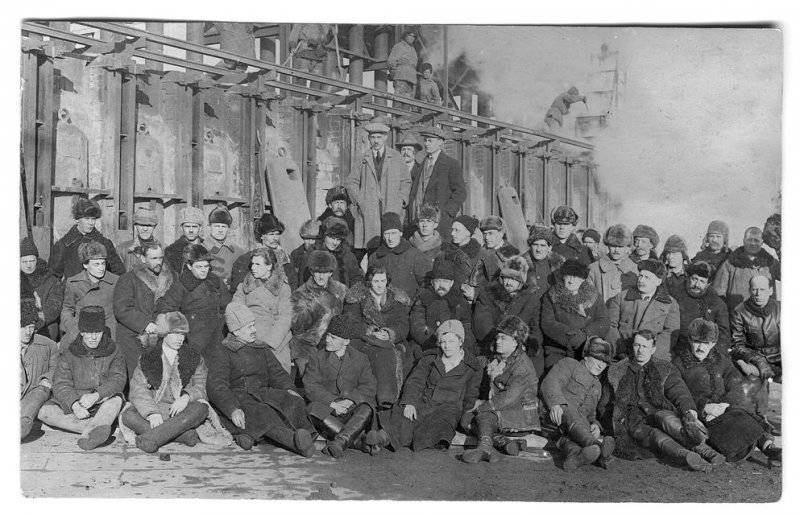 One of the leaders of the colony Foote wrote: “Due to the late transfer of land and the relatively late arrival of agricultural machines from America, our farm could not be developed on an estimated scale this year. They started working the land after spring sowing and without machines, by the usual manual method. this summer 25 tithe of rye, which gave approximately 2.800 pounds. These 2.800 pounds of rye were used to seed 700 tithes for winter.Say collected all 50.000 pounds. Also sown for 110 tithes of spring wheat and 100 tithes for oats, yes 5.000 pounds of wheat and 7.500 pounds of oats, 20 also sowed dessiatines for millet, flax, etc. About 1000, dessiatines were seeded for winter rye and wheat and approximately as much prepared for future spring sowing. process only 12 tithe. Incidentally sown: potato 15 acres, cabbage - 25000 units, cauliflower 5000 units, peas 2 acre, beans 2 acre, 3 acre - tomato, cucumbers, lettuce, radishes, carrots and beets "
Coke plant. Extraction of the first coke. Kemerovo, 24 March 1924 g 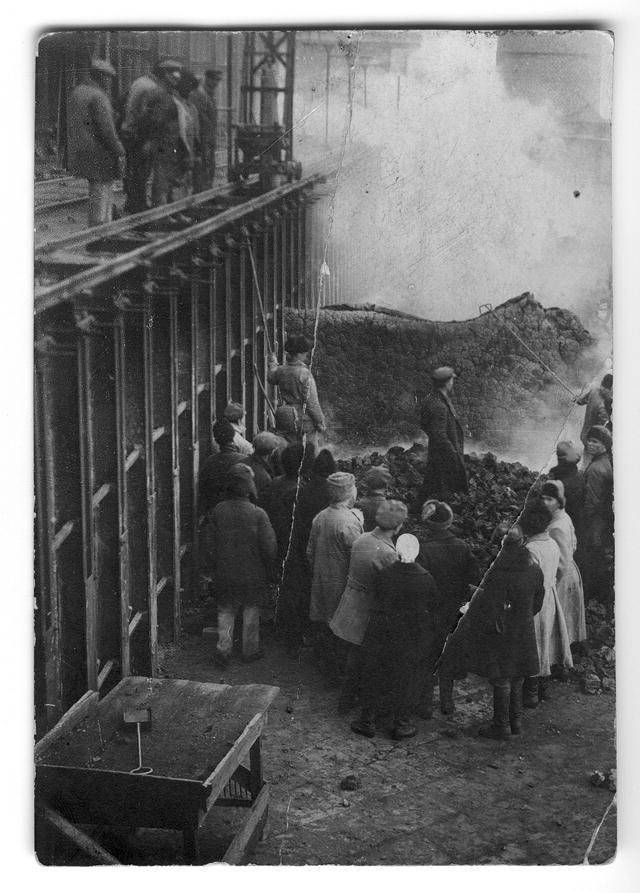 It should be added that the yield of all agricultural crops on the colonists' land was 2-2,5 times higher than in the surrounding lands of local peasants.
Coke plant. Panorama of the plant. Kemerovo, 1924 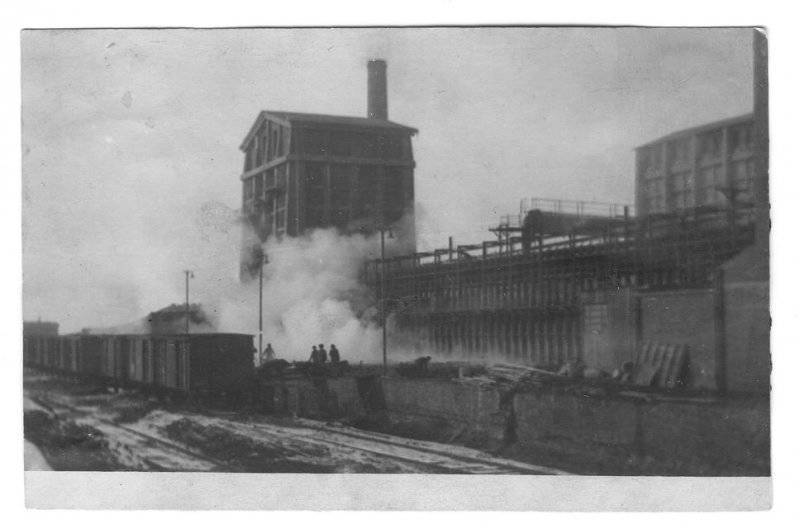 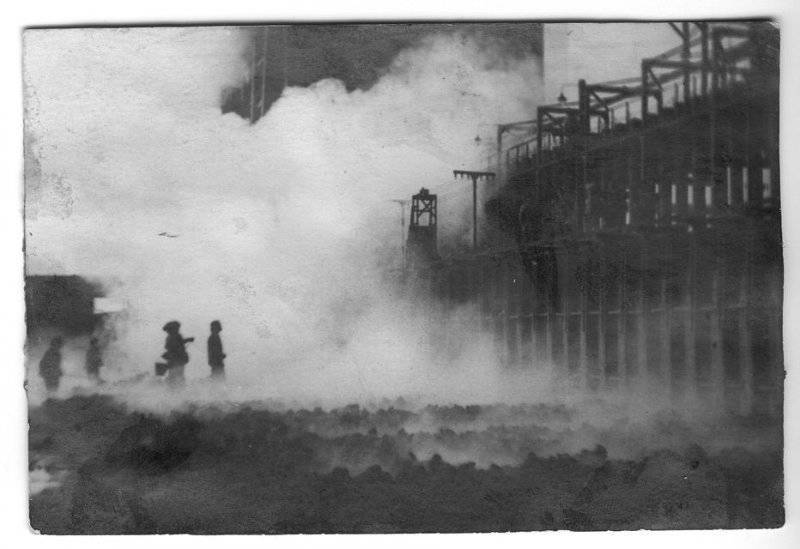 Labor productivity in mines, coke-chemical and chemical plants, built and managed by colonists, was also 2-3 times higher than in neighboring enterprises. Moreover, as Fut wrote, “Soviet power (i.e. Kuzbasstrest) carried out coal mining in Kemerovo predatory, which would inevitably lead to costs in the future and, therefore, the performance of Chemrudnik’s pre-AIK owners was fictitious because which would have had to be laid in a decade or two to eliminate the consequences of the primitive level of production. "
AIK people in nature. Kemerovo mine, September 24 1924 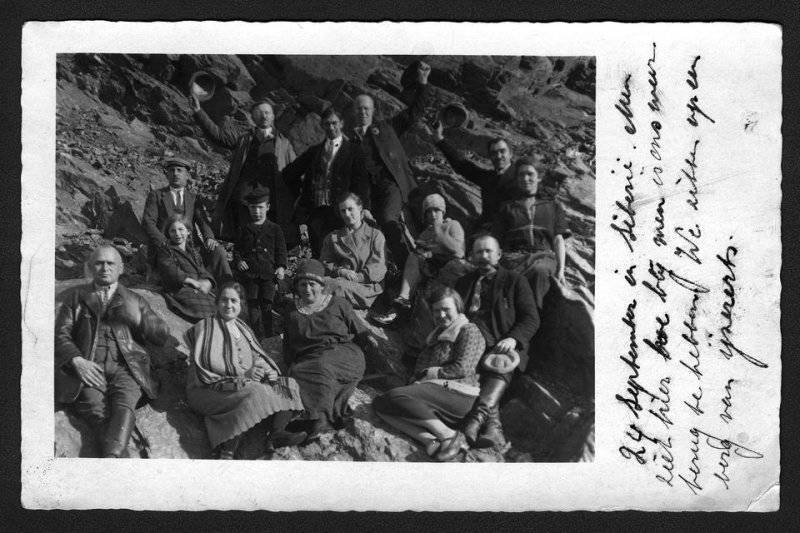 At the same time, the Soviet government very often did not fulfill the stipulated clauses of the agreement signed with the colonists. For example, the government of AIKovtsev was deceived about the promised delivery of 500 felt boots and 500 coats to supply workers in the winter of 1922 / 23, which provided for 5 with the paragraph fifteen paragraph. "Winter, spring and summer have passed," Foote writes, "but those have not yet been received." It did not provide colonists and building materials (19.000 promised logs for building houses), and they had to extract the forest themselves and build houses for themselves.
A house on the 150 colonists built by themselves 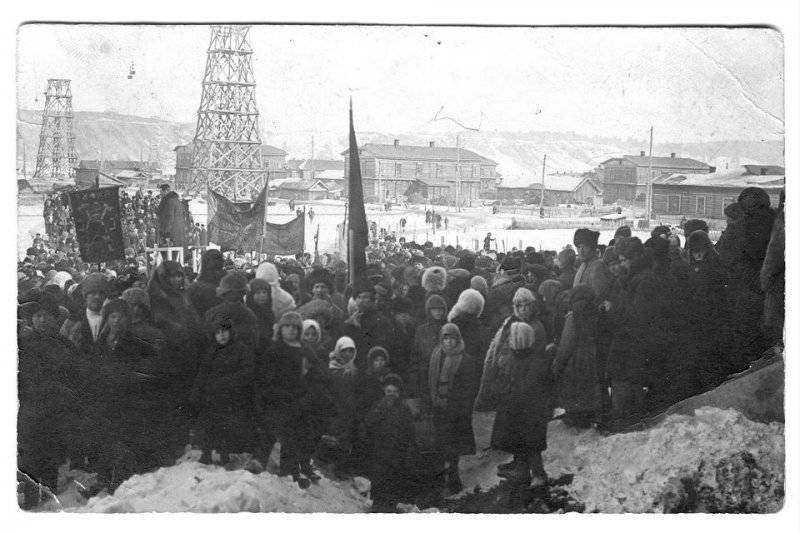 In December 1926, the Soviet government refused to renew the contract with Kuzbass AIC, about 90% of colonists returned to the US, about 7-8% went back to 1930. The remaining 15-20 people accepted Soviet citizenship and continued to work in Kemerovo mines until before 1950-60-s.
Panorama Koksokhimzavod. 1924 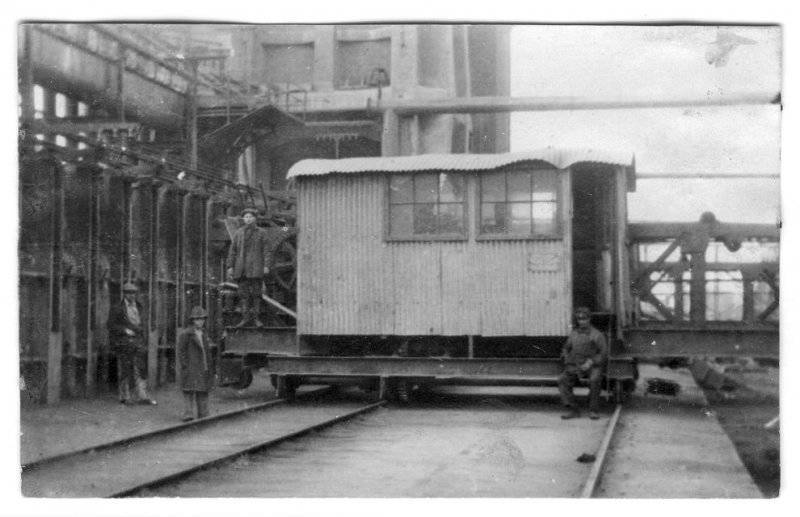 AIKovtsy on the Red Hill. Kemerovo mine, 1925 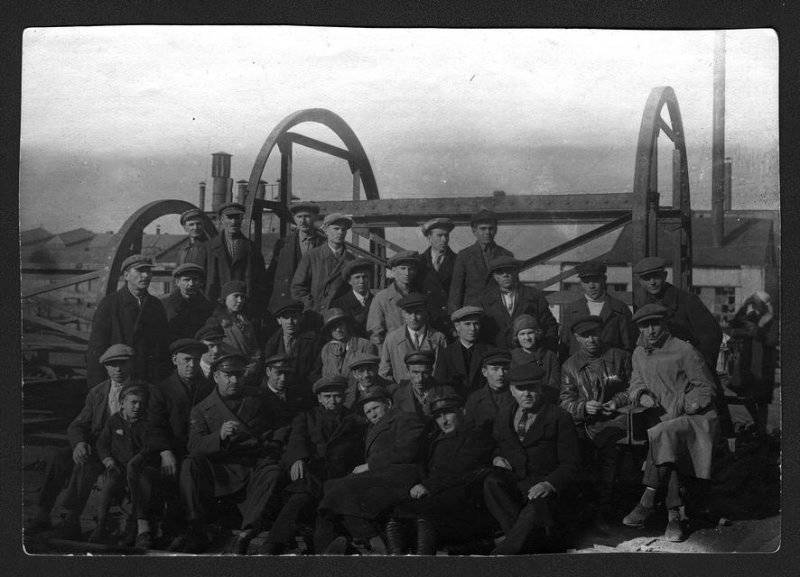 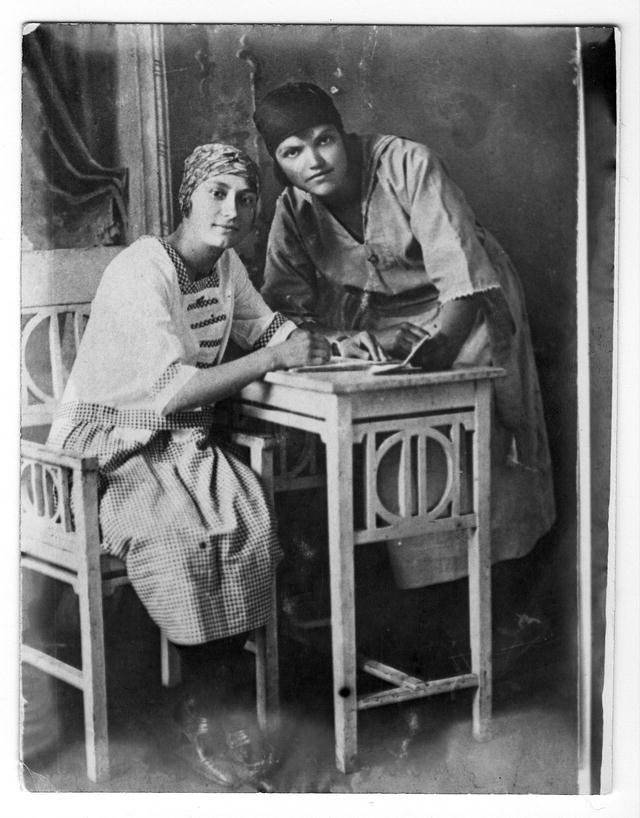 Panorama of the Guryev Plant. 1926 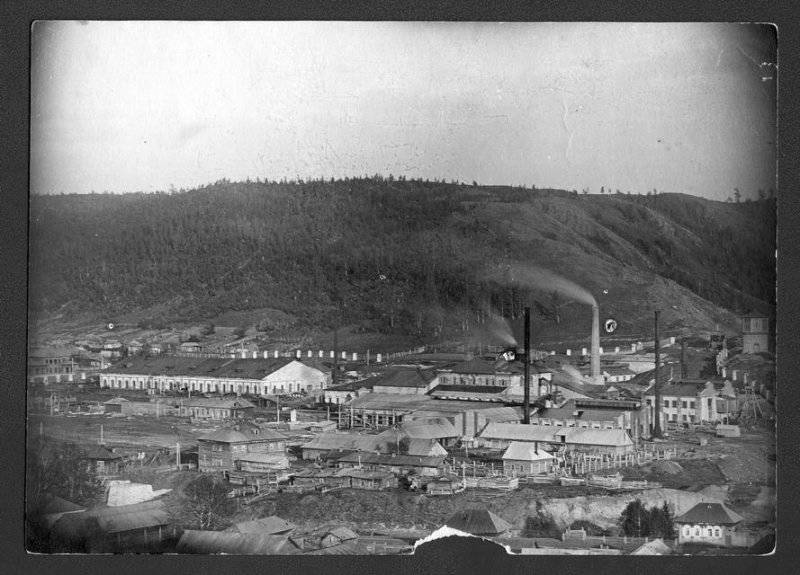 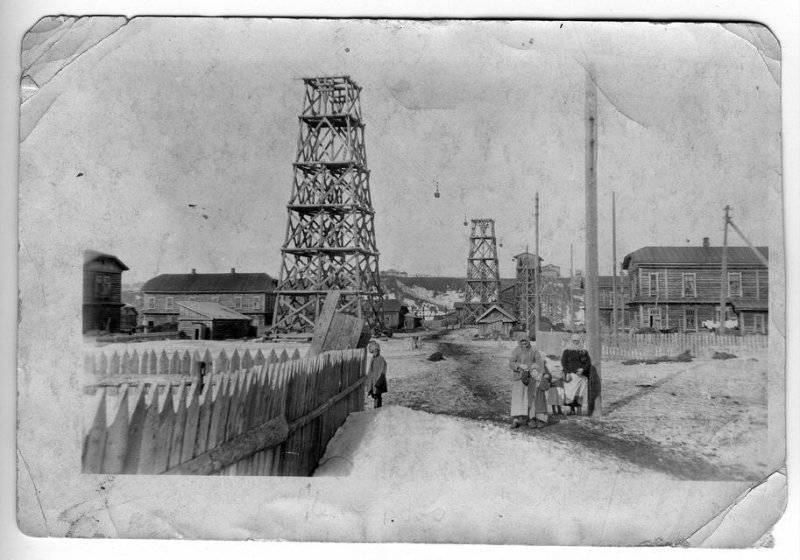 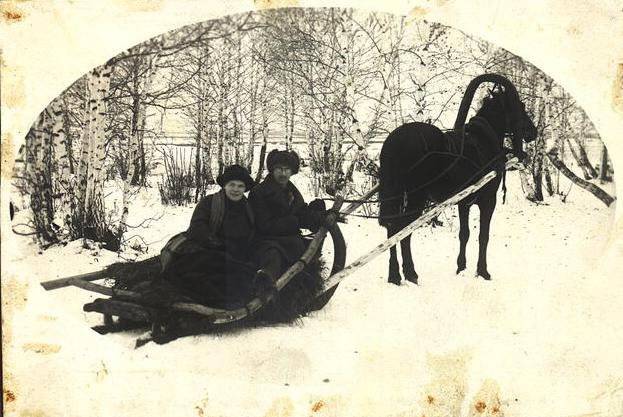 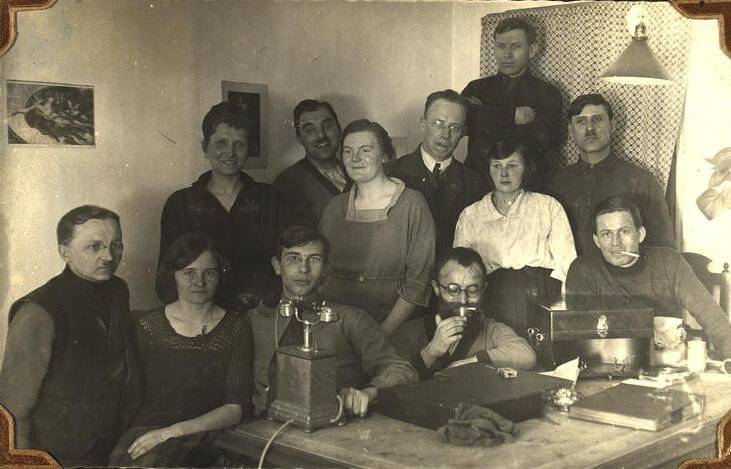 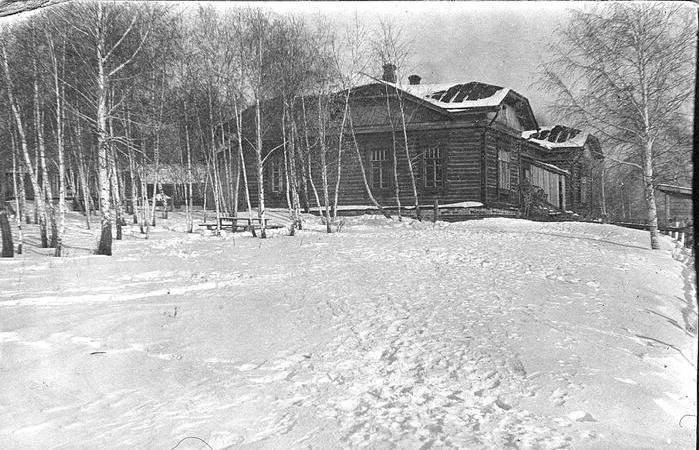 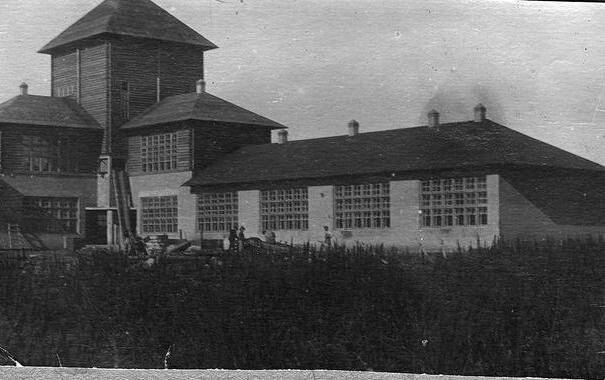 View of the coking plant, the village Shchegolskoye. 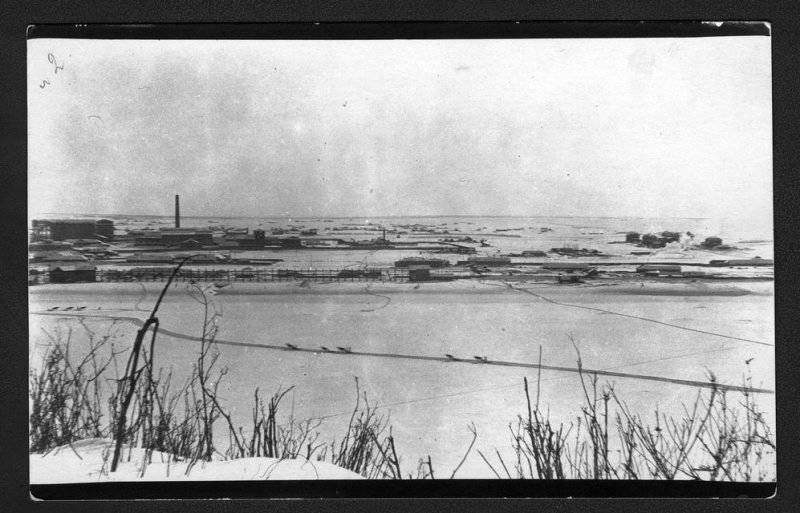 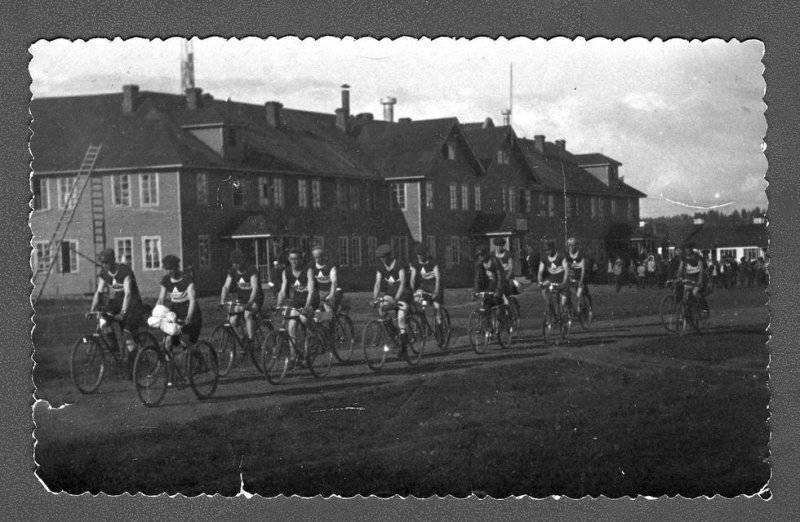 The group of miners of the North mine during the introduction of jackhammers. Start 30's. 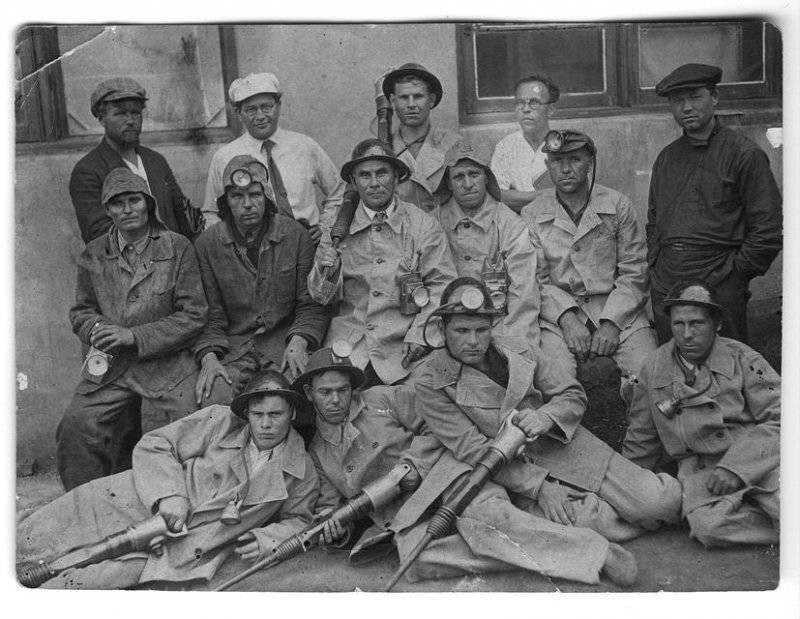 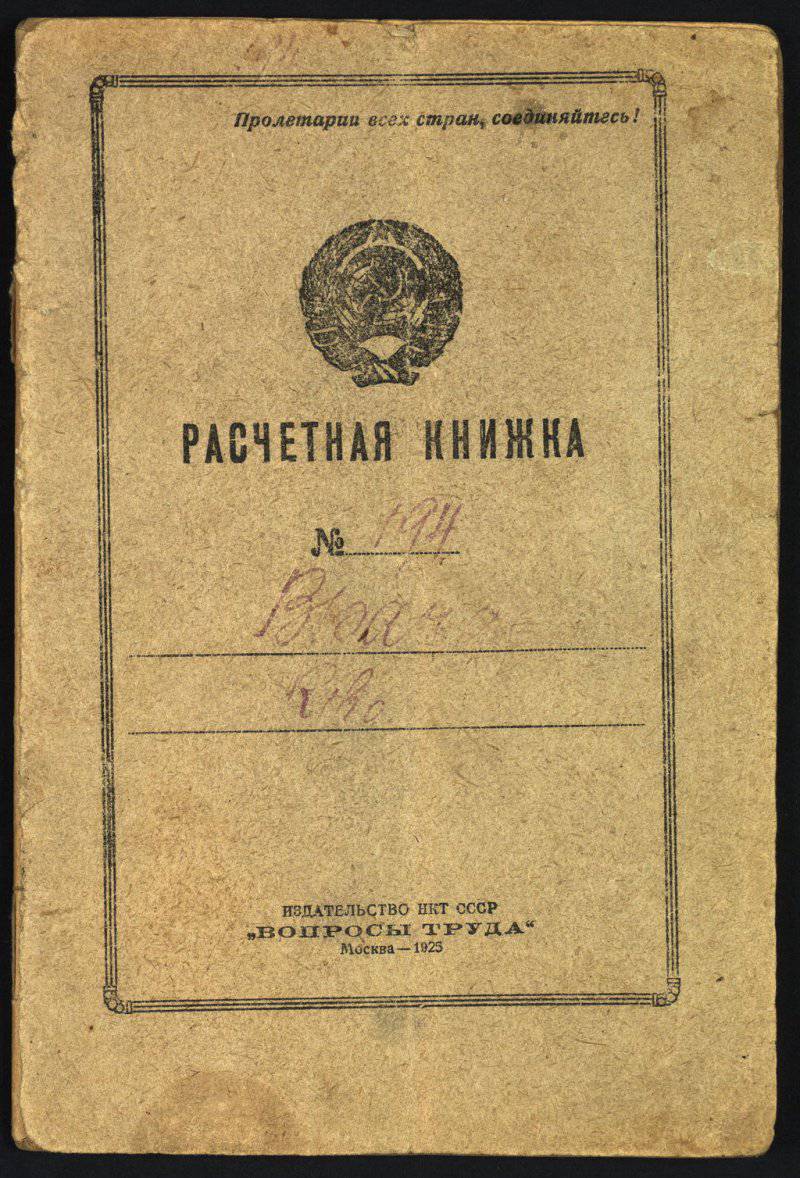