Such a long-awaited "Lada"

20 May 2010
5
Unfortunately, the new Russian submarine does not belong to the fourth generation of diesel-electric submarines. 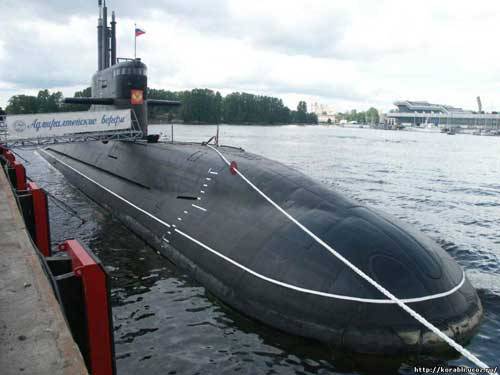 22 April 2010 in St. Petersburg members of the state commission finally signed the acceptance certificate from the Admiralty Shipyards OJSC for the main diesel-electric submarine (DEPL) of the 677 "Lada" project "St. Petersburg". This event and the customer - the Russian Navy, and the contractor - Admiralty Shipyards, OJSC, waited for entire 12 years and 4 of the month. That is how much time has passed since the submarine was laid out in December 1997.

The diesel-electric submarines of the 677 “Lada” project were developed at the Central Design Bureau of Marine Engineering (CDB MT “Rubin”) under the supervision of General Designer Yuri Kormilitsin. According to officials, this ship belongs to the fourth generation of submarines. But is it really?

There is something to be proud of

Of course, the new submarine has a number of fundamental differences from its predecessors. First of all, it is necessary to note the high degree of automation of the processes of centralized management of all ship systems and weapons from the operator's desks located in the main command post.

Increased capacity of the rocket-torpedo complex. This was done by well-known design bureaus, research and production associations and research institutes, including the TsBB MT Rubin, NPO Avrora, FSUE Central Research Institute Elektropribor, Novator Design Bureau, and NPO Agat. As a result of their joint work, an anti-ship CLUB-S appeared. This is an integrated rocket system, which is a unique development that actually has no analogues in the world.

Russian scientists, designers, builders essentially made a breakthrough in the technical and economic characteristics and technology of creating the project "Lada". During the development work, dozens of new solutions were proposed. All weapons, boat systems and materials - this is the last word of science and technology.

On a submarine more 170 devices and systems that have not yet been produced in Russia. The boat has a new navigation system, the weight of which is just 50 kg. Previously, so many weighed one gyrocompass. For the first time, the design used technologies that were previously used only in the aerospace industry.

For example, the hydroacoustic complex is built on the latest elemental base and with the latest mathematical software. In the nasal tip is placed highly sensitive noise-finding antenna. A fundamentally new universal multifunctional periscope has been installed. Lifting mast devices are telescopic. All of them, except for the commander, do not penetrate into a solid case. Introduced a new system of receiving radio information from the shore in a submerged position.

The Achilles' heel of all our boats, with the exception of the diesel submarine of the 636 project (“Kilo” according to the Western classification) and the nuclear submarine of the 971 project, was considered high underwater noise. During 18 years - in 1968-1986, four (!) Resolutions of the CPSU Central Committee and the USSR Council of Ministers were devoted to solving this problem. Every six years, the task was given to reduce the noise level 2-3 times. Three prescriptions of the highest political and state leadership of the country were able to be fulfilled. But the requirements of the fourth document, as they say, hung in the air, because the work on the topic was interrupted due to lack of funding. At the same time, it should be emphasized that on atomic multi-purpose submarines of the 971 project, for example, it was possible to reduce the level of underwater noise by 30 decibels, that is, by the level of sound pressure - by 30 times, and by the level of radiated sound power - by a thousand times!

The noise of "St. Petersburg" should be close to the background values ​​of the sea. And by stealth - to surpass all the submarines built earlier with us, including the diesel boats of the 877 project, which are called the “Black Hole” in the West - they make so little noise when they go under water.

How can this be achieved? The author of these lines received the answer to this question at the Krylov Shipbuilding Research Institute (KSRI), the State Scientific Center "Central Research Institute named after academician A. N. Krylov". For boats of the fourth generation, special sound-absorbing - up to low frequencies - rubber coatings with a thickness of just 40 mm have been created. They are two times thinner than those used previously. The new coating consists of 7-8 layers of different perforations and rubber profiles. The idea is simple: the more air cavities, the more effectively it absorbs noise of different frequencies and at different depths. The head of the department of shipboard and industrial acoustics of the Institute, Doctor of Technical Sciences, Professor Ernst Myshinsky told about this.

So, the statement made by the first deputy general director of the state corporation Russian Technologies Alexei Aleshin that Lada is the most promising project in which more than 120 innovative technologies are used is basically true. But only partly, if we consider that the design of the Lada began in the central design bureau of marine equipment "Rubin" in 1989. The fact that 20 years ago, perhaps, was an innovation, today is the last century. Moreover, not all the ideas of designers managed to implement in the metal.

For all that, our Lada has broken many world records, in particular, in terms of construction time — an unprecedented submarine displacement of 1765 tons.

For comparison: the lead diesel-electric submarine U-31 of the 212 project in the series was laid at the Kiel shipyard Howaldtswerke Deutsche Werft AG (HDW) one year after ours (in 1998), and six years later - 29 July 2004 was transferred to the naval German forces. The surface (normal) displacement of this diesel-electric submarine is almost like that of the Russian - 1700 tons.

While the Admiralty Shipyards built one St. Petersburg, the Bundesmarines received four submarines from Howaldtswerke Deutsche Werft AG: U-31, U-32, U-33 and U-34.

It is also impossible not to draw attention to the number of other Russian and German submarines. Our maximum immersion depth - 300 m, the German - 400. Our crew has 35 people, the German one has 27, that is, we compensated for the imperfection of technology by increasing the number of people aboard the submarine for 8 people.

Armament "St. Petersburg", if you believe the official sources, too, unfortunately, is inferior to Kiel submarines. The Russian diesel-electric submarines have six torpedo tubes, the German ones have eight.

The propulsion system on the German submarine used fuel cells, commonly referred to as "hydrogen batteries." This is an air-independent Siemens power plant. Energy is released from eleven hydrogen-oxygen fuel cells of 120 kW each and through proton exchange membranes is transferred to the main engine. "Hydrogen batteries" allowed to increase the autonomy of the submarine sailing several times in comparison with traditional batteries of diesel-electric submarines.

WHAT DO WE HAVE?

Thirty years ago, the Central Design Bureau "Lazurit", the NPO "Kvant" and "Cryogenmash" began to create propulsion systems for the submarines with electrochemical generators (ECG). Submarine C-273 of the 613 project was re-equipped according to the 613E Katran project. If ordinary submarines at a two-node speed without recharging the batteries could be under water for no more than four days, while using the ECG, the period increased to one month.

The second direction of Russian designers is the creation of diesel engines operating in a closed cycle. The 615 project with a single engine, embodied in metal in the middle of the last century, has become unique throughout the world.

Since 1978, the head developer of propulsion systems with ECG has been the Special Design Bureau for Boiler Building. It turned to the experience of the Ural Electrochemical Combine and NPO Energia on the creation of an ECG for spacecraft. This is how the Kristall-20 submarine engine appeared, using oxygen and hydrogen. The latter was in a bound form - in the intermetallic compound.

It was assumed that the Lada will receive an anaerobic power plant based on ECH. However, on the submarine "St. Petersburg" it is not. And this, alas, means the following: Russia for the first time could not create a submarine of a new generation.

This is fraught with negative consequences both for the Russian Navy and for military-technical cooperation with other countries.

No matter how sad it is to state, but the failure to create fourth-generation boats will greatly shake Russian positions on the world market of underwater shipbuilding. Our regular customers, China and India, are able to independently build third-generation submarines. Buy our "Lada" Venezuela intended. But instead of the Lada, we offered a completely different submarine of the third generation 636 project, for which Caracas thanked us politely, but did not give us any money.

Meanwhile, while we can’t cope with the fourth-generation diesel-electric submarines at all, Sweden, Japan and other countries have already begun to work on the creation of fifth-generation boats.

However, it is more important for us to satisfy the need for diesel submarines of the domestic underwater fleet. They remained a few units. In the Barents Sea, hardly four diesel-electric submarines will be able to go to sea at the same time, two in the Baltic, one in the Black Sea, and five in the Far East.

Everything is relative. In the 2003 year, when the submarine forces were not yet formed, the fleets included a 21 diesel-electric submarine, including the 19 diesel submarine of the 877 project and two of the 641B project. Of these, only nine submarines were part of the standing forces. And the vast majority of them had various limitations in operation. Over the past seven years, new boats have not been built, and many old ones had to be put to sludge.

At the beginning of the century, the entire submarine fleet of Russia was 15 percent of the strength of the combat strength of the submarine forces of the Soviet Navy. In the first decade, this figure dropped even more. So now we need to arm not India and China, but our own fleet. And the government had such plans.

Speaking at the groundbreaking ceremony for the submarine of the 667 “Kronstadt” project in 2006, Vladimir Alexandrov, general director of the state unitary enterprise Admiralty Shipyards, said: “The fleet insists on the early construction of two brigades of six submarines”. Aleksandrov explained that such submarines are usually built during 28-32 months - depending on the level of funding. Much more months and years passed, but no new boats appeared on the fleets.

By the way, the figure itself - 12 DEPL - is doubtful. Because calculations of the use of submarines in a combat situation show us a different composition of forces and means. From the many years of experience in operating strategic nuclear submarine missile cruisers, it is known that to ensure their combat stability, each ship must have three multipurpose nuclear submarines. And for their cover, in turn, you will need three diesel-electric submarines. In life, this rule is not maintained for a long time. And what will happen next?

Our Navy before 2015 had to get the fourth-generation 40 diesel submarines. However, after such a long and not very successful "epic" with the creation of "St. Petersburg" this program is likely to be revised.

It is planned to build a series of eight submarines project 677. Now on the stocks in varying degrees of readiness are two submarines - "Kronstadt" and "Sevastopol". Now that the production cooperation has been created and the construction technology has been worked out, it can be expected that the fleet will start receiving at least two combat units each year. But as they say, wait and see ...