Another dispute around the "Mistral"

December 24 2012
94
Around the middle of 2010, it became known that the Russian Ministry of Defense intends to acquire for the domestic naval fleet a number of universal landing ships of the Mistral project of French production. Already at the start of negotiations, this purchase caused a lot of controversy, affecting both the characteristics and tactical features of the French ships. Over time, all these disputes subsided, but periodically they resume with renewed vigor. So the public reacts to new messages about the progress of negotiations, the signing of contracts, etc. 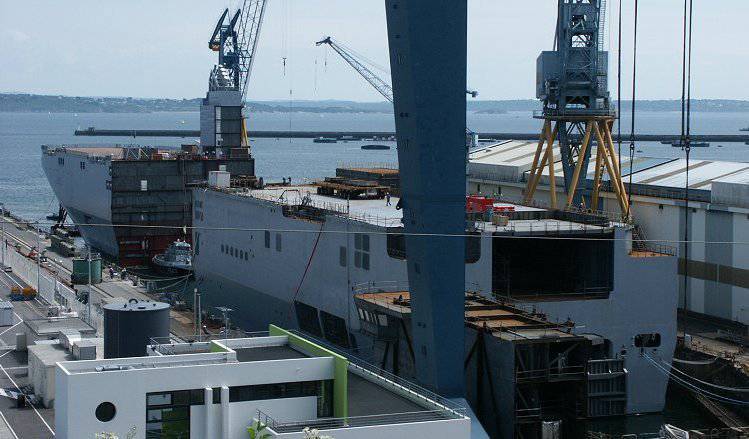 A few days ago, the talk of the Mistrals sounded new. The reason for this was the publication of "Vedomosti", in which, with reference to some sources in the Ministry of Defense and at an unnamed defense company, more than interesting information was cited. The article stated that the first two ships for the Russian Navy would be completed, and the construction of the third and fourth, the construction of which was planned to be carried out at Russian shipbuilding enterprises, was canceled. In favor of such a decision, an argument was made concerning the negative attitude of military sailors to the very idea of ​​buying foreign landing ships.

Soon after news Other messages of a different nature have appeared on the refusal to build two ships in their shipyards. A spokesman for the United Shipbuilding Corporation A. Kravchenko said that his organization was not aware of any plans of the Ministry of Defense to abandon the construction of the third and fourth "Mistral". Contracts for the construction of these ships have not yet been concluded, however, as repeatedly stated earlier, they will be signed in the coming months. Just a few hours after the press service of the USC came new data. RIA Novosti, through its channels in the defense department, found out that no one really refused two landing ships, their construction will start later than previously planned. Bookmark the third and fourth ships moved from 2013 to 2016 of the year. The deadlines for the delivery of ready-made ships to the fleet also moved accordingly.

As a result, the situation became clearer and reports of the Vedomosti source were not confirmed. It is difficult to say whether this news was expected. After the change of the Minister of Defense, a lot of experts and people just interested began to wait for some changes in the course of the military department, primarily related to a number of controversial decisions adopted by the previous Minister A. Serdyukov. The contract for the construction of "Mistral" just belonged to this category. Nevertheless, in the end it turned out that the new landing ships would not fall under the reduction, but would simply be built several years later. As a matter of fact, it was the controversial nature of the Russian-French contract that drew the most attention to all the plans of our defense department regarding the purchase of Mistral.

This aspect of the whole stories with French ships can shed some light on the nature of the current "sensation." Since some of the public, including experts and the military, do not agree with the decision of the old leadership of the Ministry of Defense and do not see the point in buying foreign ships, it could become a “target audience” of the news. Perhaps the source of "Vedomosti" simply did not have adequate information regarding the conclusion of contracts for the construction of the third and fourth "Mistral", which affected the quality of the first news. In addition, you can not exclude the version, if I may say so, the damaged phone. One way or another, if a source in the ministry exists, then either its information did not correspond to reality, or the correct data was incorrectly interpreted later.

It is noteworthy that the resolution of the disputed situation by the official statement of the USC press service had almost no effect on the course of disputes among the interested public. The tactical and technical nuances of the Mistral, as well as the question of their necessity for our fleet, are still being discussed. As before, proponents of procurement are pushing for the possibility of obtaining modern technologies and foreign experience, which will be an obligatory consequence of the construction of ships at Russian factories. The most frequently mentioned is the transfer of technology associated with two French developments: the SENIT-9 combat information management system and the SIC-21 communication system. At the same time, an argument is made in the form of possible future cooperation. Theoretically, Russia and France in the future can create joint projects of any combat boats and ships that will be supplied to third countries. This question has already been repeatedly raised in the light of one or another class of weapons and military equipment, and almost always such cooperation has caused only a positive reaction from the officials of both countries.

No less common and expected counter-arguments against the purchase and construction of ships of the French project. First of all, the very need for such ships for the Russian Navy is criticized. The popular opinion is that the Russian fleet simply does not need such landing ships, because our marines have nowhere to conduct landing operations using such equipment. The second item in the list of objects of criticism is the transfer of technology. There are some doubts about the possibility of the transfer of any serious technologies to France, first of all concerning electronic equipment. It is also not yet clear to the general public whether the full documentation on the CICS and the means of communication will be handed over to Russia. The stated characteristics of these systems look quite high and interesting, however, a number of experts have certain concerns about concealing from the Russian shipbuilders and the military some of the specific information that has a critically important priority.

It is worth noting that after several years of disputes, opponents of the purchase of the Mistral have sometimes begun to agree with the need to equip our fleet with such ships. Indeed, today there are about a dozen large landing ships in the Russian Navy, the newest of which was commissioned in the early nineties. The number of landing boats is much larger. In addition, this technique is significantly younger. Nevertheless, in our fleet there is not a single ship belonging to the class of universal amphibious assault ships. Thus, the French Mistrals can slightly improve the quantitative and qualitative aspects of the amphibious capabilities of the Russian navy. The rest of the nuances of international contrast still remain the subject of controversy.

The main feature of all the events around Mistral is the decision of the Ministry of Defense. The contract for the construction of the first two ships, despite all the controversy and criticism, was signed and at the moment there are compelling reasons to expect to conclude agreements on the construction of the next Mistral. In other words, the Russian Ministry of Defense has already determined its needs. This decision of the leadership of the armed forces suggests that the French side agreed to the transfer of all necessary technologies, documents and equipment. Otherwise, consultations and negotiations would hardly have reached the signing of the contract. Despite the criticism of the then leadership of the Ministry of Defense, this deal does not look obviously losing for our country.

However, the timing of the construction of the third and fourth landing ships may give rise to some suspicions. Perhaps there were some problems with the transfer of technology or France decided to refuse assistance with the organization of production of Mistral in Russian factories. If this assumption is true, then perhaps in the near future there will be new messages about the future of the project. In addition, the number of amphibious assault ships may eventually be limited to only two built in France. One way or another, I would like to hope that the decision of the previous leadership of the Ministry of Defense was serious and thoughtful, and the further implementation of the conditions of the Russian-French contract will go smoothly and without sudden changes in the course.