Russian space has become a means of "gutting money"

December 24 2012
47
The “ambitious projects” of the authorities in the space sphere (such as plans for flights to the Moon and Mars and the construction of the Vostochny cosmodrome), the outstanding designer of rocket and rocket and space technology, the honorary general designer of the Military-Industrial Corporation NPO mechanical engineering "(" Chelomey firms ") Herbert Efremov. 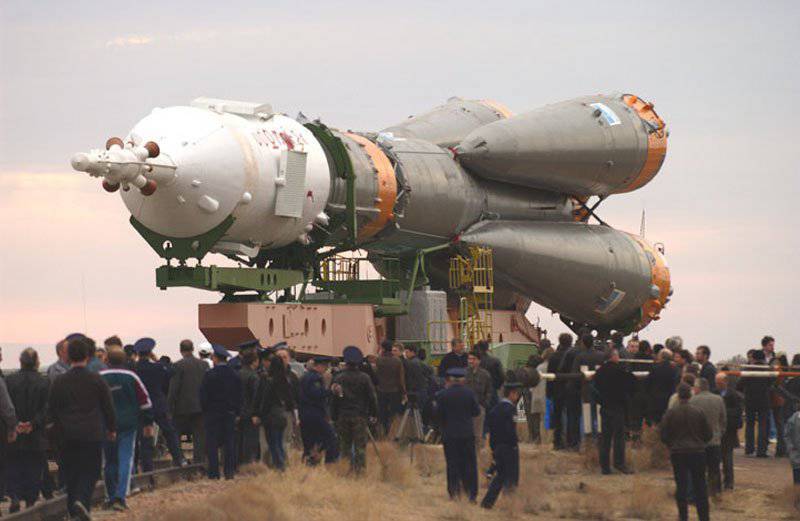 "Everyone wants to go to the moon!"

“We do not have gas in the villages, there are no roads, and the villages themselves become less. The Chinese, Hindus need rovers and moon rovers, they are milestones for them. For us, a repetition of the past, we have long taken these tops, ”he explained his position in an interview with Rossiyskaya Gazeta.

“We must deal with everything that works for urgent tasks, gives practical results. Namely: we need remote sensing satellites, both for civilian tasks and for the military. Topography, navigation is needed, I would especially note with the creation of domestic electronic maps, because so far GLONASS works without Russian maps. It is important to develop communication services, mainly through geostationary satellites. Or, say, weather satellites - the cat wept for them now. These areas should be strengthened, ”the veteran of the Russian defense industry is convinced.

“And on Mars and on the Moon our positions cannot be strengthened, there are no pragmatic tasks for us,” explains Herbert Efremov. - There are more pressing issues. For example, does everyone know that during the five-day war of 2008 of the year (in Georgia) we were forced to receive satellite images of the situation in Tskhinval from Israel? There were problems with the aerial survey of aircraft, there was no domestic system of intelligence from space. I still can't tell, but it is. ”

Meanwhile, our modern officials are "not interested" in low-budget projects that the domestic defense complex offers. Often, they now give preference to the purchase of foreign equipment - after all, "the cost of acquiring domestic products, by the standards of officials, is relatively small, and the responsibility is higher." “The 500 million rubles program is not interesting for our officials,” says a veteran of the national defense industry. - Interestingly? For example, a long-term project of a base on the moon at a cost of, say, 50 billion is yes! And even better is even more expensive. ”

As a confirmation, the illustrious designer gave an example using (more precisely - not using) the UR-100 combat intercontinental missile (according to the NATO classification - “Stilet”), developed at the time by “NPO Mashinostroyenia” and still in service with the Strategic Missile Forces to launch into space of various satellites. To do this, NPOmash began work on the creation of the Svobodny space center — at the location of the mines of the UR-100 combat missiles (the Vostochny space center is now being built there). “It was just suggested that one mine should be altered for launches of“ weave ”with satellites, including with“ Condors ”(satellites also developed by NPOmash. - KM.RU),” says Efremov. - To convert a combat missile into a space carrier, a minimum of work is required - the warheads and the complex of means for overcoming the enemy’s missile defense system are removed, a satellite and a new fairing are installed. That is, our program is not financially costly for the country. ”

And why didn’t this project go to the leading authorities, asked Rossiyskaya Gazeta?

“No one is interested in a cheap rocket. Instead, on the basis of "weave", Rokot was developed (it was already done by the Khrunichev Center. - KM.RU) - with an overclocking unit instead of the third stage and a new control system. But it is several times more expensive than the "weave"! - Efremov tells. - I was handed over from the customer: learn to manage money. I, as upholding projects without kickbacks and cuts, was not needed. They called him the righteous, they approved the project, but they did not accept it ... Everyone wants to go to the moon! ”

"What to do with the cosmos"

Herbert Efremov, I must say, did not even reach into his pocket before the words of criticism of the leadership of the space and the entire defense industry, defending its principal position - the domestic space must be pragmatic. In early October. For example, he wrote for the newspaper “Vedomosti” an article “What to do with space”, in which he sharply argued with Deputy Prime Minister Dmitry Rogozin, who oversees the government of the military-industrial complex of Russia.

Of the many problems of the rocket and space industry, the designer wrote, first of all it is necessary to deal with the two most important ones. The first is the restructuring of the work of Roskosmos as the only agency legally responsible for space issues, as well as for intercontinental ballistic missiles, including combat ones. The second is the prioritization of work on space issues. And on the first, and on the second problems, Efremov has his own opinion.

Referring to the first problem, he wrote: “I, who worked for a long time as the head of a large rocket-space association, JSC MIC NPO Mashinostroyenia, clearly see that often the interests of the directors of space industry enterprises are reduced to knocking out the maximum scope of projects and maximum implementation time. I want to note that at the same time, Roskosmos is interested only in works in which the department acts as a customer, i.e. manages cash flow. In particular, the agency is indifferent to projects where the customer is another agency - the Ministry of Defense. Therefore, in fact, a failure has been formed in the organization of industry work related to combat missile themes and military space. ”

“I will give some examples from the practice of the NPO Mashinostroeniya,” continued Efremov. - After the first annual final board of Roskosmos in 2004, my question was why the combat missile theme was not affected at all at the meeting, they explained to me: the Ministry of Defense is the customer, let him (the enterprises) do it. Or when, in 2006, I officially addressed Roskosmos from the council of heads of cooperation enterprises on the current issues of creating the Condor remote sensing system (Earth remote sensing), the answer was similar - let the Ministry of Defense take care of you. ”

According to the famous designer, it was because of Roskosmos’s failure to fulfill its main tasks and, as a result, the quality of products declined, and the leadership of the country decided to radically reform the agency. “Analyzing the events, we can say the following,” Efremov noted. “The attempt to accelerate the privatization of rocket and rocket-space enterprises turned out to be untenable and untimely. The inclusion of Roscosmos in the structure of the Ministry of Industry and Trade does not give the desired effect due to the excessive commercialization of the latter’s approaches. ”

“Got” from Herbert Alexandrovich to Deputy Prime Minister Dmitry Rogozin and for how he outlined the priorities for the development of the rocket and space industry. Dmitry Rogozin, noted Efremov, arranged them as follows:

- a fantastic project of a base on the moon or something similar as the supposedly breakthrough element of the space program of Russia;
- defense space work;
- scientific space works;
- pragmatic tasks of space systems and devices.

“It seems to me,” Efremov argued, “that the desire of Dmitry Rogozin in the first place to put some kind of fantastic task such as creating a research base on the moon is really debatable. It is generally accepted that all the world achievements in space exploration are obtained by automatic devices. And work on near-earth manned space stations, including the ISS, are of a nature associated primarily with the hassle of the human body, its safety. The developers of the idea of ​​creating a base on the moon are clearly trying to repeat for many billions of rubles passed under Sergey Korolyov and Georgy Babakin in 1960-1970. And no breakthroughs in high technology from the repetition of the past will not follow. ”

“It seems to me quite obvious,” continued Herbert Alexandrovich, “that solving pragmatic tasks (communication services, television, cartography, etc.) is the main priority of the space industry in Russia. Although not fanfare, but economical and efficient. After all, it is known that the space group of Russia contains only three Earth remote sensing satellites, two meteorological satellites and is inferior in capabilities now not only to the United States, but also to the EU countries, China, Japan, India ... and to recreate the domestic electronics industry. ”

In the second place, according to the veteran of the Russian defense industry, defense space works should really be. “It is amazing,” he writes, “that even the adoption of the impressive national security strategy in space by the NSSS in the USA for the NSSS, as I see it, did not cause any concern to the Russian Space Agency or the Ministry of Defense. And it would be worth worrying about how Russia, when implementing this strategy, will be able to secure its defense interests in space. ”

Third place in the priorities of the domestic space Herbert Efremov assigns (we note, like Dmitry Rogozin) fundamental research in space with the help of automata. And only in the last place in the list of priorities appear in his "flights to Mars and to more distant areas." Moreover, the scientist believes that they should be implemented with the involvement of private investors.

Here is a picture of the state of the domestic cosmos presented from the story of Herbert Efremov. A sad, admittedly, picture - especially against the background of the indisputable achievements of Soviet cosmonautics and rocket science.

Of course, as a true patriot of his company, NPO Mashinostroenia, from the city of Reutov near Moscow, Herbert Alexandrovich could not resist in his story from elements of libism. After all, almost all the specific projects advertised by him, which were hacked to pieces by the former leadership of Roskosmos and the Ministry of Defense, are the fruit of the work of the Chelomey firm’s collective.

In addition, some of the criticisms expressed by him are far from indisputable. Take, for example, the project to create the Vostochny cosmodrome. Yes, while Russia has an alternative to it - time-tested, well-proven Baikonur. But this is not ours, but Kazakhstan’s territory. What if, after the aging Nursultan Nazarbayev had retired, Moscow would not have a relationship with the new leadership of this country? Where will Russia be able to launch heavy rockets from? But Herbert Alexandrovich himself reminds our military of the "impressive national security strategy in space" adopted by the United States, which has not yet caused "no concern" in our military department ... And if the Defense Ministry is finally puzzled by this challenge - from what launch pad can Russia does space launch the necessary cargo?

And yet, the testimony of the person who gave 60 years of life to the design work and the leadership of the renowned Chelomey company, which beats the alarm about the kickbacks practice that hit the Russian defense industry, the incorrect alignment of the original priorities of the development of the national space, deserve The management of the industry and the country listened to them in the most attentive way.