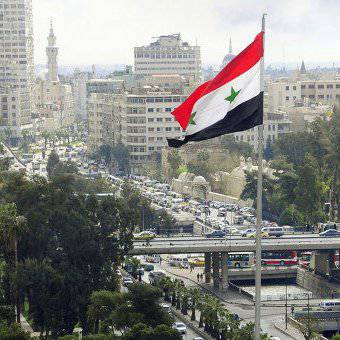 At a time when "democratic" media claimed that the rebels were keeping the northern capital of Syria, the city of Aleppo, under control, the city was visited by the UAR Prime Minister Vail Al Khalki along with a government delegation. The head of government met with residents of the city, public and religious leaders, representatives of the intelligentsia. He listened to the complaints of the residents of Aleppo, in particular, about the disruption of bread (armed groups burn bakeries and attack vehicles carrying food) and electricity (militants commit terrorist attacks against power plants). Al-Khalki said that bread and other foodstuffs would be delivered to the city by air, and repair teams operating to restore electrical grids worked around the clock and selflessly, and the networks would be restored soon. In many areas, electricity is already there.

The visit of the head of government to Aleppo outraged the rebels and their masters, and in response they broke out with a whole wave of misinformation that the military barracks in the village of Khandarat and Zahraa had allegedly taken. But the command of the Armed Forces denied this information, stating that all attacks on military bases in the province of Aleppo, as well as in the province of Daraa, were successfully repulsed. However, the rebels are no longer exaggerating their military "successes" for the first time.

So far, all their successes have come down to fighting defenseless and unarmed people. In this they really reach heights. Attacking a bus with civilians does not require much valor. And on the road between Homs and Tartus, three unarmed people were abducted, two of whom are citizens of Russia: V.V. Gorelov and Abdessattar Hassun are citizens of both Russia and Syria. Another of the abductees is Italian citizen M. Bellouomo. They are all employees of the steel plant. The gangsters demanded a large ransom for them - in this way they earn their "revolution".

Militants have repeatedly stated that citizens of Russia, Ukraine, Iran are legal targets for them, because these countries support the legitimate government and oppose the foreign intervention that these pseudo-revolutionaries crave for. And the call began to be realized.

Another monstrous crime occurred in Aleppo - a “oppositionist” husband killed a wife from Russia who was a supporter of the legitimate authority of Syria. At least, this is how he explained his act to the militants who approved him and did not consider what happened to be a crime. It doesn't matter if the motive for the murder was political or if the murderer simply hid behind politics - but this speaks eloquently about what fate awaits women if, God forbid, these savages come to power.

Not only unarmed specialists, but also refugees become victims of terrorists. In Damascus, there is a large Palestinian refugee camp Yarmuk. Syria has long given the Arab brothers a shelter where the inhabitants of the occupied lands could get a roof over their heads. Now this camp has become a target for terrorists. They repeatedly attacked him, fired upon them, carried out explosions there. In response, Palestinians supporting the legitimate government of Syria organized self-defense units that defended the refugee camp for a long time. But a few days ago, the superior forces of the Islamist group Djabhat al-Nusra crushed the defenses of these units and broke into the camp. Many refugees were forced to flee again, saving their lives - someone to neighboring areas, and someone to Lebanon.

But the hostile media is about to blame the Syrian government, not the terrorists, for the difficult situation. At first, this was done by the Arab TV channels Al-Jazeera and Al-Arabiya, and then they were picked up in the West.

In this connection, the Syrian Foreign Ministry sent a message to the UN Security Council, in which the situation was described in detail. Syria calls not to speculate on the sufferings of the Palestinian people and to stop supporting and arming the terrorists. The message noted that the SAR has made a lot of efforts to protect the Palestinian refugees from what is happening, but the anti-Syrian forces, by contrast, tried their best and are trying to involve the Palestinians in the conflict.

Yes, conspirators against Syria need to sow enmity between the two fraternal peoples, and this is the cause of the fierce terrorist attack on the Yarmuk refugee camp in Damascus. How convenient it is - using the support of the Western media, blaming the suffering of the Palestinians is not the real perpetrators, but the Syrian government, so that they would be distracted from their true struggle for trampled rights and began to look for enemies in their friends.

While the fake "friends of Syria" accuse her of all mortal sins and make plans for foreign intervention, true Friends with a capital letter assist. So, Iran presented the 20 ambulance cars to the Syrian people. This is indeed a necessary gift, especially considering how many such cars were hijacked by gangsters or incapacitated as a result of terrorist attacks. Moreover, hijacked ambulances were often used by militants to transport weapons...

And yesterday, Syria was happy. I was happy, despite all the disasters that had fallen on this small state. The national team became the champion of the Asian Cup, winning with the 1: 0 score against the national team of Iraq.

In many cities of Syria, this caused a patriotic upsurge - even in Homs and Aleppo, where people took to the squares and streets, celebrating this sporting victory. But the residents of the city of Tartus, who organized a mass patriotic demonstration on this occasion, were especially inspired.

And the fans, who were directly on the stadium, raised the national flags of Syria and the portraits of President Bashar Al-Assad. They chanted patriotic slogans, and even Al-Jazeera, which aired the match, had to show it all.

Congratulate the brotherly Syrian people with a sports victory and wish them good luck not only on the football field, but also on the field of opposition to all the forces of evil!