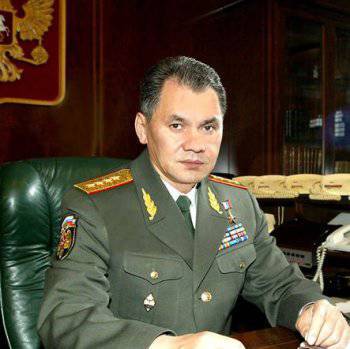 Defense Minister Sergei Shoigu ordered 70 to allocate billions of rubles for the development of military towns demanding that. It had to be done long ago - at least, in the summer, when the head of the government pointed to the previous head of the Defense Ministry. Six months ago, on this ground, Shoigu and his predecessor Anatoly Serdyukov even had a skirmish, however, the latter was not able to solve the financial problem, while Shoigu reportedly found reserves in the shortest possible time.

General Shoigu sought to resolve the painful issue with military camps as quickly as possible, and as a result, it took about three weeks to develop a project to finance them, informed sources told Kommersant. According to the publication, part of the funds will be allocated from the military’s own budget, in part, if necessary, additional budget allocations will be a source of funding.

In total, almost 70 billion rubles will be spent on the construction, the press service of the Ministry of Defense reports. The funds were planned out not only for 2013 year - 36 billion rubles - but also for 2014 and 2015 years (about 17 and 16,6 billion rubles, respectively).

Only next year, the Ministry of Defense plans to equip 50 military camps, the airborne forces and the locations of foreign military bases are priorities. However, 12 military camps inside the country will be equipped first: two in the Western Military District, four in the Central and six in the East. Means will go, in particular, on development of a social infrastructure and repair of objects.

"Three main directions for the development of military camps have been identified," the ministry said. "The first direction is to bring their infrastructure to a typical standard that fully ensures the livelihoods of the deployed troops and the social needs of military personnel and their families. It is planned to rebuild the missing facilities. Implementation of the second direction provides for the restoration of the buildings already existing in the townships in the form of a major overhaul. etsya capacity expansion of existing facilities, that is, to bring them to the needs dislotsiruemyh troops. "

Dmitry Medvedev pointed out the need to urgently develop a plan for financing military camps in June. Then at a meeting in a military town Petrovsky Shoigu and Serdyukov even quarreled: the first spoke about the importance of the development of small towns, the second answered that there was no money. And in the following months, until the resignation broke out, he never found them.

Shoigu, on the other hand, coped with this task, however, on the towns, the question still apparently will not be closed for a long time. First, it is necessary to attach the liberated towns, which the municipal authorities do not want to take, for rags, and the Ministry of Defense does not have funds for restoration. And there is still a lot of money to be found in order to pay off the contractors, to whom a number of Oboronservis structures owed millions.