December 21 2012
290
If a person does not like something in a company, he either tries to change something within the company itself, or simply leaves it. If we transfer human emotions to the state platform, then we can say that something like this happens with the countries of the world. However, there are those states that have a very original position, the so-called “dissenting opinion” within a certain international community, and they rush with this opinion like a chicken with an egg, not knowing where to find proper application. That is not so, it is not that; give something, I do not know what; and everything like that. A demonstration of this kind of own exclusiveness is being made, on which everyone should either pray or put as a priority their own foreign policy. 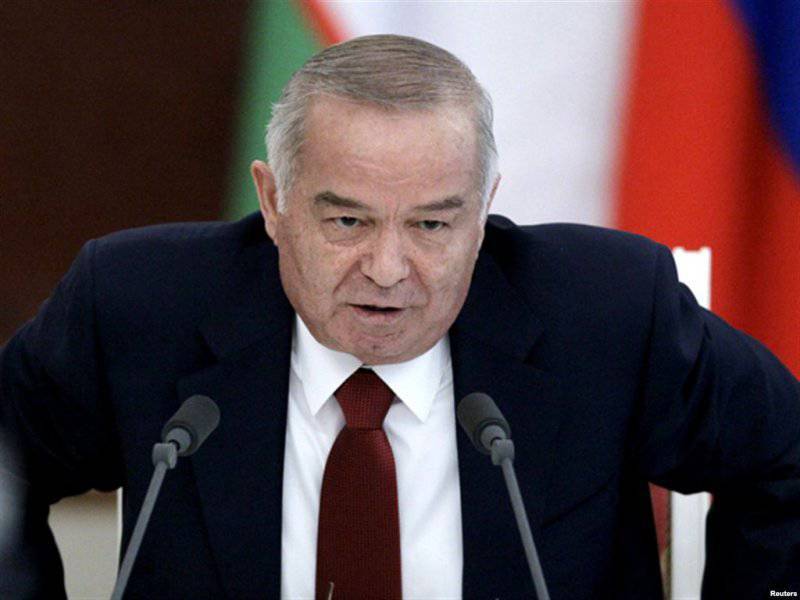 It was in this vein that cooperation was conducted (although the term “cooperation” here fits well here) of Uzbekistan with CSTO partners. Uzbekistan had a “special opinion” on any convenient reason and clearly led the partners to the question: what, in fact, Tashkent, headed by Islam Karimov, wants? Of course, the official Tashkent did not intend to answer the question specifically, but, by and large, all the other CSTO member states knew the answer themselves. And the answer, in all likelihood, was as follows: Uzbekistan strangely recalled membership in the Collective Security Treaty Organization only when the roasted rooster pecked the head of this state and the country's main political elites, I am sorry, in soft spots. The rooster does not bite - there are lengthy conversations that the position of some CSTO members for Uzbekistan is unacceptable, this position, it turns out, hurts Tashkent’s geopolitical interests. But as soon as the rooster deigned to aim at those very soft places, as in Uzbekistan, an unexpected desire for brotherhood and unity of peoples in the post-Soviet space was manifested.

The events in Andijan in 2005 can serve as a vivid example of such a policy of Uzbekistan regarding the CSTO. Rallies of Uzbek citizens against the arrests of local businessmen turned into a bloody massacre, during which, according to various sources, people were killed, from 187 to 230 people, hundreds were injured. The special forces encountered groups of well-armed militants, who were often covered by civilians. According to the local society for the protection of human rights, it was among the ordinary inhabitants of Andijan that the most victims were.

There is still no accurate assessment of the events of 7-year-old, but most political analysts agree that a very violent and bloody action could have been provoked by Islamists in order to seize power in Uzbekistan, first at the regional and then at the national level. Karimov understood that after the Rose Revolution in Georgia, the Orange Revolution in Ukraine, and after the riots with the subsequent change of power in Kyrgyzstan, the revolutionary wheel could also roll on it personally. Obviously, the President of Uzbekistan did not want to let go of the reins of government, and therefore was ready for any action, if only the Andijan riots did not spread to other parts of the country, including Tashkent.

After the dissatisfaction in Andijan was broken up, as a result of which numerous victims were recorded, the head of Uzbekistan was counting on international support, and hoped that the West would rejoice in how he, Islam Abduganievich Karimov, dealt with the revolutionary encroachments. However, the West, which itself often went to revolutionary sponsors on the territory of the former Soviet Union, then decided to chide the President of Uzbekistan firmly and even initiated the adoption of a resolution within the UN Security Council condemning official Tashkent for actions on the territory of Andijan. Karimov tried to state that these were the internal affairs of Uzbekistan, but no one was listening to him. As a result, the resolution was adopted by a majority vote. Russia, Belarus, Tajikistan, Kazakhstan (from the CSTO) and other countries voted against the resolution.

Recall that by the time the Andijan events began, thanks to its “special opinion”, Uzbekistan was in the format of temporarily suspended membership in the Collective Security Treaty Organization. However, after the West painfully clicked Uzbekistan and Mr. Karimov personally on the nose, he decided to re-join the CSTO and seemed to forget about his disagreements with other members. And indeed it is: well, how can you not join in, if a revolutionary threat hangs over you, which in a number of post-Soviet republics has thrown off their leaders in almost two accounts. Leonid Kuchma, Eduard Shevardnadze, Askar Akayev suffered. Islam Karimov clearly did not intend to fill this list with his name. And if he was not going to replenish, then it was necessary to find a decent cover from the threat to be in place of the above-mentioned political figures. And this cover Uzbekistan quickly found - the CSTO.
In general, the friendship between Uzbekistan and other CSTO member countries in 2006 has rekindled.

However, after the wave of revolutionary sentiment in the post-Soviet space began to fade, and after the US started talking about withdrawing troops from Afghanistan, Uzbekistan once again began to declare its original vision of participation in CSTO projects. Again, with and without a reason, Tashkent began to express its “special opinion”. And it was expressed either in the refusal to participate in joint exercises, the deceleration of military-technical projects, in the refusal to ratify the agreements. In general, the Andijan stress clearly took place at Islam Abduganiyevich, and instead came the certainty that it is possible to bargain with the CSTO. Well, after Washington announced the possibility of donating large volumes to Tashkent weapons and military equipment in the withdrawal of its contingent from the Afghan territories, Mr. Karimov decided it was time to seize the moment again.

In the summer of this year, Uzbekistan announced another temporary suspension of membership in the CSTO, which was motivated by discrepancies in the positions of its members.

In general, one has to admit that the temporary suspension of membership is a very interesting position, according to which you seem to be a member of the CSTO and have the right to impose your veto on making certain decisions, but at the same time you are smoothly taking bribes. Just what - my hut on the edge, I'm sorry ...

But at the recent meeting of the CSTO in Moscow, the partner countries (Armenia, Russia, Belarus, Tajikistan and Kyrgyzstan) decided not only to meet the demands of official Tashkent to suspend membership in the Organization, but also to completely stop (suspend) its participation. In other words, the demarche of Uzbekistan has led to the fact that Uzbekistan has remained outside the framework of the CSTO, and already, God forbid, a new “Andijan” emerges, then Mr. Karimov will not be so easy to take and say: “Friends, I urgently return to our friendly company. Take me! ”Now, to return to the CSTO, if, of course, Karimov thinks about it at all today, you will have to step over your ambitions and ratify all those agreements that official Tashkent simply ignored at one time.

The Uzbek publications for the most part positively assess the exit of Uzbekistan (and in fact its withdrawal) beyond the framework of the CSTO. According to a number of journalists and analysts in Uzbekistan, the rules for the use of force by the CSTO security forces are contrary to the interests of the country.

In this regard, the question arises: why, if the interests of the Uzbek side did not meet the interests of the CSTO, the official authorities of this state still did not differ by political will and did not make decisions about leaving the Organization. Apparently, Mr. Karimov still kept the CSTO in reserve: as they say, let it be - for every fireman. And so that there were fewer claims, Tashkent decided to temporarily suspend membership. However, with respect to Uzbekistan, it was decided to make a much more uncompromising decision.

It should be noted that on the eve of the Moscow CSTO summit, Russian Foreign Minister Sergei Lavrov flew to Tashkent. He met with both his Uzbek counterpart and President Karimov. Obviously, Lavrov was instructed to clarify what awaits Uzbekistan if it continues to send its strange policy towards the CSTO. Apparently, the official authorities of Uzbekistan were expected to review their decisions taken in the summer. But today Tashkent, which feels completely protected from external and internal threats, was clearly not impressed with Lavrov’s explanations. This proved for the last time that Tashkent is ready to use the CSTO far not as a tool for multi-faceted cooperation, but as a means to instantly solve their own sudden problems. And so far there are no such problems - Tashkent is definitely not interested in military cooperation with Russia, Armenia, Kyrgyzstan and Tajikistan.

But the world is changeable. And the calm that would seem to exist in the post-Soviet space at any moment can be replaced by completely different political weather conditions ...