Slovakia under the patronage of Germany and the Slovak army during the Second World War. 2 part

According to the German-Slovak agreement concluded by 23 in March, Germany guaranteed the independence and territorial integrity of Slovakia, and Bratislava pledged to provide free passage through its territory to German troops and coordinate its foreign policy and development of the armed forces with the Third Reich. In developing the plan "Weiss" ("White" plan for the war with Poland), the German command decided to attack Poland from three directions: an attack from the north from East Prussia; from the territory of Germany through the western border of Poland (main attack); attack of the German and allied Slovak troops from the territory of the Czech Republic and Slovakia. 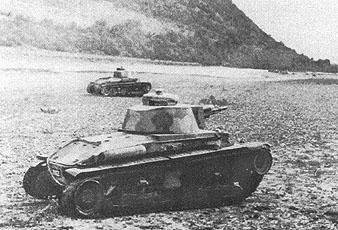 On the morning of September 5 1 of the year 1939, simultaneously with the onset of the Wehrmacht, the movement of the Slovak troops began under the command of the Minister of National Defense, General Ferdinand Chatlos. Thus, Slovakia, together with Germany, became an aggressor country in World War II. Slovak participation in hostilities was minimal, which was reflected in the losses of the field army "Bernolak" - 75 people (18 people killed, 46 wounded and 11 missing).

Minor hostilities fell on the 1 of the Slovak division commanded by General Anton Pulanic. She covered the flank of the advancing German 2 Mountain Division and occupied the villages of Tatranska Yavorina and Yurgov and the city of Zakopane. 4-5 September, the division took part in clashes with Polish troops and advanced on 30 km, by 7 September took defensive positions. From the air, the division was supported by airplanes of the Slovak air regiment. At this time, the 2-I Slovak division was in reserve, and the 3-division of the Slovak army defended the 170-kilometer section of the border from Staraya Lyubovna to the border with Hungary. Only 11 September The 3-I division crossed the border and, without resistance from the Poles, occupied part of Poland. October 7 announced the demobilization of the army "Bernolak".

With minimal participation in real hostilities, which was largely due to the rapid defeat and collapse of the Polish armed forces, Slovakia politically won a significant victory. Lands lost during 1920 and in 1938 were returned. 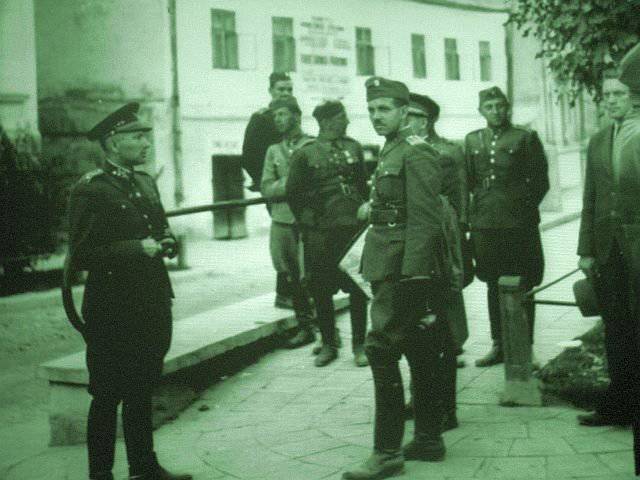 After the end of the Polish campaign in the Slovak armed forces, a certain reorganization took place. In particular, in the Air Force, by the beginning of 1940, the old squadrons were disbanded and new ones were created: four reconnaissance squadrons - 1st, 2nd, 3rd, 6th and three fighter squadrons - 11th, 12th, 13 -I am. They were brought together in three aviation regiment, which were distributed in three regions of the country. Colonel of the General Staff R. Pilfousek was appointed Air Force Commander. The Slovak Air Force had 139 combat and 60 auxiliary aircraft. In the spring, the Air Force was reorganized again: the Air Force Command was established, headed by General Pulanikh. The command was subordinated to the Air Force, anti-aircraft artillery and observation and communications service. One reconnaissance squadron and one air regiment were disbanded. As a result, by May 1, 1941, the Air Force had 2 regiments in its combat composition: 1st reconnaissance (1st, 2nd, 3rd squadrons) and 2nd fighter (11th, 12th and 13th squadrons).

23 June 1941 The Slovak Republic declared war on the USSR, and the Slovak Expeditionary Force (about 26 thousand soldiers) was dispatched to the Eastern Front on June 45. His commander was General Ferdinand Chatlosh. The corps was included in Army Group South. It consisted of two infantry divisions (1-I and 2-I). The corps was armed mainly with Czechoslovakia. weapons. Although during the war, the German command carried out some deliveries of mortars, anti-aircraft, anti-tank and field guns. Due to a shortage of vehicles, the Slovak Corps could not maintain a fast pace of attack, not keeping up with the German troops, so he was assigned to protect transport communications, important facilities, destroy the remaining centers of resistance of the Soviet troops.

The command decided to form a mobile connection from the motorized units of the corps. All mobile units of the corps were reduced to a mobile group, under the supervision of Major General Augustine Malar (according to other sources, Colonel Rudolf Pilfousek). In so-called. "Fast brigade" entered a separate tank (1st and 2nd tank companies, 1st and 2nd anti-tank gun companies), motorized infantry, reconnaissance battalions, artillery division, support company and engineering platoon. From the air, the "fast brigade" covered 63 aircraft of the Slovak Air Force.

"Fast brigade" advancing through Lviv in the direction of Vinnitsa. On July 8, the brigade was subordinated to the 17 Army. On July 22, the Slovaks entered Vinnytsia and fought the offensive through Berdichev and Zhytomyr to Kiev. The brigade suffered heavy losses.

In August, the 1941-based motorized division was formed on the basis of the “quick brigade” (Rapid Division, Slovak. Rýchla divízia). It consisted of two incomplete infantry regiments, an artillery regiment, a reconnaissance battalion and a tank company, about 1 thousand in total (the composition was constantly changing, divisions were attached to other units from the corps). The remaining parts of the corps were included in the 10-th guard division (about 2 thousand people). It consisted of two infantry regiments, an artillery regiment, a reconnaissance battalion, and an armored platoon (later transferred to the "Quick Division"). It was stationed on the territory of Western Ukraine in the rear of the German troops and initially was engaged in the elimination of the encircled units of the Red Army, and then the struggle against the partisans in the Zhitomir region. In the spring of 6, the 1943 th guard division was transferred to Belarus, in the Minsk region. The morale of this part left much to be desired. Punitive actions oppressed the Slovaks. In the autumn of 2, due to the increasing number of cases of desertion (several units completely went over to the partisans), the division was disbanded and sent to Italy as a construction brigade.

In mid-September, the 1-I motorized division was advanced to Kiev and took part in the storming of the capital of Ukraine. After this, the division was taken to the reserve of Army Group South. The respite was short and soon Slovak soldiers took part in battles near Kremenchug, advancing along the Dnieper. Since October, the division has fought as part of Kleist's 1 Tank Army in the area of ​​the Dnieper. 1-I motorized division fought near Mariupol and Taganrog, and in winter 1941-1942. located at the turn of the river Mius. 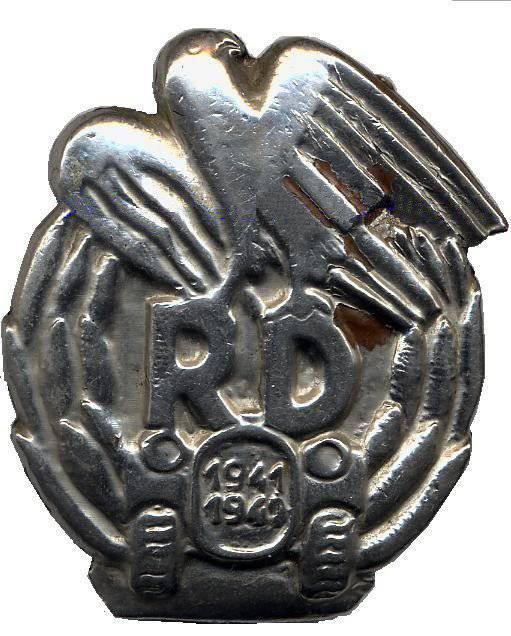 Breastplate of the 1 th Slovak division.

In 1942, Bratislava offered the Germans to send the 3 division to the front to restore a separate Slovak corps, but this proposal was not accepted. The Slovak command tried to carry out a rapid rotation of personnel between the troops in Slovakia and divisions on the Eastern Front. In general, the tactics of maintaining one elite unit on the front line - the “Fast Division,” until a certain time, was successful. The German command spoke well of this formation, the Slovaks proved themselves to be “brave soldiers with very good discipline,” so part of them were constantly used at the front line. 1-I motorized division took part in the storming of Rostov, fought in the Kuban, advancing on Tuapse. At the start of 1943, the division was led by Lt. Gen. Stefan Jurek. 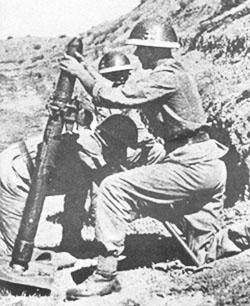 Bad days for the Slovak division came when a radical change occurred in the war. Slovaks covered the retreat of the German troops from the North Caucasus and suffered heavy losses. The “fast division” was surrounded near the village of Saratov near Krasnodar, but part of it managed to break through, leaving all the equipment and heavy weapons. The remnants of the division were taken by air to the Crimea, where the Slovaks guarded the Sivash coast. Part of the division was under Melitopol, where it was broken. More than 2, thousands of people were captured and became the backbone of the 2-th Czechoslovak airborne brigade, which began to fight on the side of the Red Army.

The 1-I motorized division, or rather its remnants, was reorganized into the 1-Infantry Division. She was sent to guard the Black Sea coast. Slovaks, together with German and Romanian units retreated through Kakhovka, Nikolaev and Odessa. The morale of the unit plummeted, deserters appeared. The Slovak command offered the Germans to transfer part to the Balkans or to Western Europe. However, the Germans refused. Then the Slovaks asked to withdraw the division to their homeland, but this proposal was also rejected. Only in 1944, a part was transferred to the reserve, disarmed and sent to Romania and Hungary as a construction brigade.

When the front approached Slovakia in 1944, the East-Slovakian army was formed in the country: the 1-I and 2-I infantry divisions under the command of General Gustav Malar. In addition, the 3 Division was formed in Central Slovakia. The army was supposed to support the German troops in the area of ​​the Western Carpathians and stop the advance of the Soviet troops. However, this army was unable to provide significant assistance to the Wehrmacht. Because of the uprising, the Germans had to disarm most of the formations, and some soldiers joined the rebels.

Soviet groups landed in Slovakia played an important role in organizing the uprising. So, before the end of the war, 53 organizational groups of more than 1 thousand people were sent to Slovakia. By the middle of 1944, two large partisan detachments were formed in the Slovakian mountains - Chapaev and Pugachev. On the night of 25 July, 1944, in the Cantor Valley near Ruzomberk, a group was dropped under the command of Soviet officer Peter Velichko. It became the basis for the 1 th Slovak partisan brigade.

In early August, the Slovak Army received an order to conduct an anti-partisan operation in the mountains, but the partisans were warned in advance, having soldiers and officers in the armed forces sympathizing with their cause. In addition, the Slovak soldiers did not want to fight against compatriots. 1944 August Tiso imposed martial law in the country. In the 12-s of August, the guerrillas stepped up their activities. Police forces and military garrisons began to cross over to their side. The German command, in order not to lose Slovakia, 20-28 August began the occupation of the country and the disarmament of the Slovak troops (of which two more construction brigades were created). Thousands of soldiers participated in the suppression of the uprising before 29 (then the size of the group was doubled). At the same time, Jan Golian ordered the beginning of the uprising. At the beginning of the uprising in the ranks of the rebels were about 40 thousand people, the end of September, the rebel army already had about 18 thousand soldiers.

The uprising was premature, because the Soviet troops could not yet provide significant assistance to the rebels. German troops were able to disarm two Slovak divisions and blocked the Dukel Pass. To him, the Soviet units came out only 7 September. 6-9 of October 2-I Czechoslovak paratroop brigade was paratrooped to help the rebels. By October 17, German troops drove the rebels from the most important areas into the mountains. October 24 Wehrmacht occupied rebel concentration centers - Brezno and Zvolen. October 27 The Wehrmacht 1944 occupied the "capital" of the rebels - the city of Banska Bystritsu and the Slovak uprising was suppressed. In early November, the leaders of the uprising were captured - divisional general Rudolf Viest and former chief of staff of the Rapid Division, head of the Slovak ground forces Jan Golian. The Germans executed them at Flossenbürg concentration camp at the beginning of 1945. The remnants of the rebel forces continued to resist in the partisan detachments and, as the Soviet troops advanced, they helped the advancing Red Army men.

In the conditions of a general retreat of the Wehrmacht and its allies 3, the government of the Republic of Slovakia ceased to exist in April. 4 April 1945 The troops of the 2 Ukrainian Front liberated Bratislava, Slovakia was again declared part of Czechoslovakia. 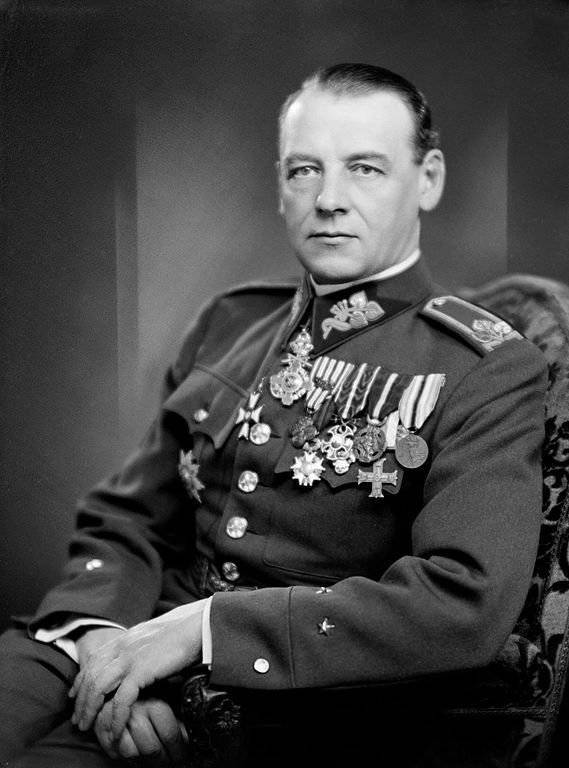