December 20 2012
6
At the very beginning of the airship building in Russia, local engineers and designers correctly identified the role of aeronautics. Proceeding from this, they did not intend to build expensive and huge combat airships, which more and more often entertained the inhabitants with great fires in the sky. In Russia, it was believed that airships should have a soft, as a last resort semi-rigid construction and cost as cheap as possible. In Russia, airships were assigned a purely peaceful role, for example, they could be engaged in the delivery of goods to remote settlements. After the First World War, new disasters came to our country in the form of revolution and the ensuing civil war. But they could not stop the progress and airship.

Ballooning in Soviet Russia, and only for peaceful purposes, began its revival in 1920. First, work and experiments were carried out in the USSR on the restoration of old Russian airships, and then they began to design their own models. In the late 20s and early 30s of the last century, airships still played a role in the development of Siberia, but later they were finally forced out of the sky by airplanes. XX century - was a century aviation.

The first attempt to revive controlled aeronautics in the country of the Soviets was made in 1920. An analysis of the equipment and parts of the old airships inherited from the Russian Empire showed that the Astra airship shell was in the best condition at that time, so it was decided to work on its restoration. After the production of individual elements of the mechanical part and the new suspension in the fall of 1920, in the village of Salizi (near Petrograd), the aeronautical team began work on assembling the airship, which was renamed the "Red Star". These works ended in mid-November, 23 November filled the shell of the airship with gas, and 3 January 1921, he completed his first flight. In total, this airship performed 6 flights, the total duration of which was about 16 hours. 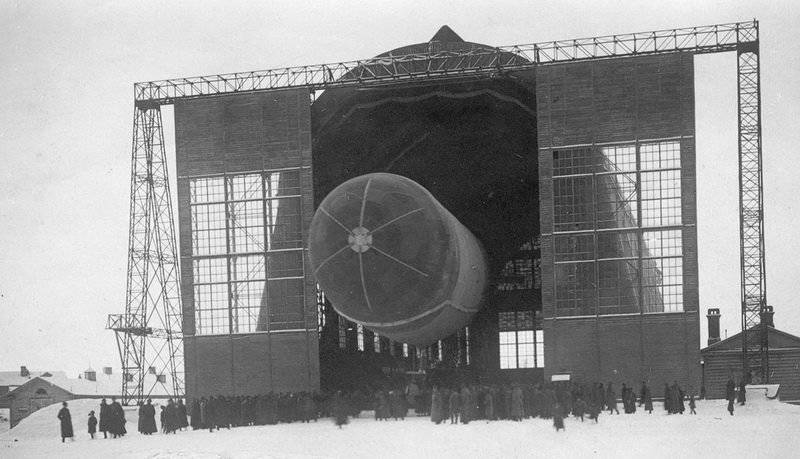 Airship "VI October"
The “Second October” became the second Soviet airship, which was built in 1923 by students of a higher aeronautical school located in Petrograd. The airship was built according to the type of sea English scouts and was made of scrap materials. In particular, its shell volume 1 700 cube. meters was sewn from the shells of old tethered balloons. The total length of the airship was 39,2 m., Diameter - 8,2 m., The power of the power unit 77 kW. His first flight of the airship performed 27 November 1923, it lasted about 30 minutes. On November 29, the airship climbed into the sky a second time, this time the flight lasted 1 for one hour 20 minutes, during the flight it reached an altitude of 900 meters. After this, the flights of the VI October airship were stopped due to the very high permeability of the envelope.

In 1923, at the Society of Friends of the Air fleet The USSR created a special Air Center, whose tasks included promoting the development of airship in Soviet Russia. After some time, the Air Center was renamed the air section of the USSR Osoaviahim. Already in the autumn of 1924, the construction of the next soft airship called “Moscow Rubber Chemist” (MHR) was completed here. Its name indicated that it was made at the expense of workers in the chemical industry of Moscow and the Moscow Region. The author of the project of this airship was N.V. Fomin. 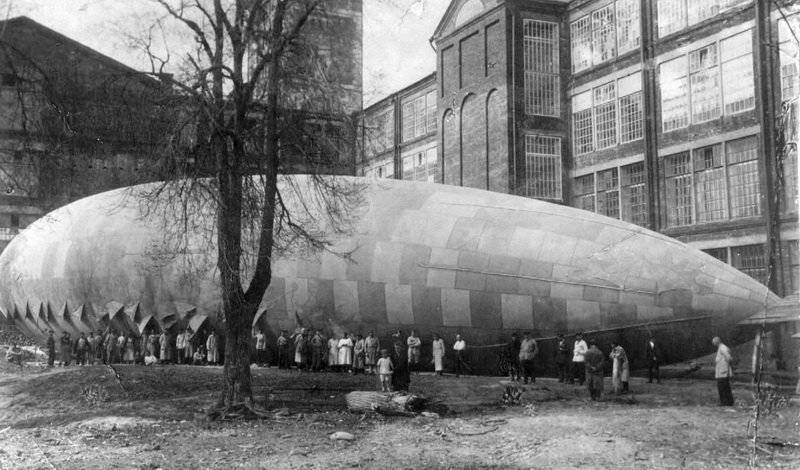 Airship "Moscow reinstate chemist"
The airship MHR possessed a shell volume in 2 458 cube. meters, its length was 45,4 m., diameter - 10,3 m. Engine power was 77 kW, and the maximum flight speed was 62 km / h. This airship could lift up to 900 kg in the sky. payload. The airship made its first flight on 16 on June 1925 of the year, under the direction of V. L. Nizhevsky, the airship spent 2 hours in the air 5 minutes. This airship was operated until the autumn of the 1928 year, while it was modernized and rebuilt several times. All in all, the Moscow Rubber Chemist made a 21 flight, flying a total of 43 hours of 29 minutes.

Simultaneously with the termination of the operation of the MHR airship in the country, almost all the training and flight work has risen. For this reason, at the call of the Komsomolskaya Pravda print edition, the collection of funds for the construction of a new airship began. Works on its production were carried out by students of the Higher Aeromechanical School, supervised the work of N. V. Fomin. In order to accelerate the construction of a new airship, it was decided to maximize the use of the MHR project with the introduction of a number of changes. The new airship was named "Komsomolskaya Pravda". 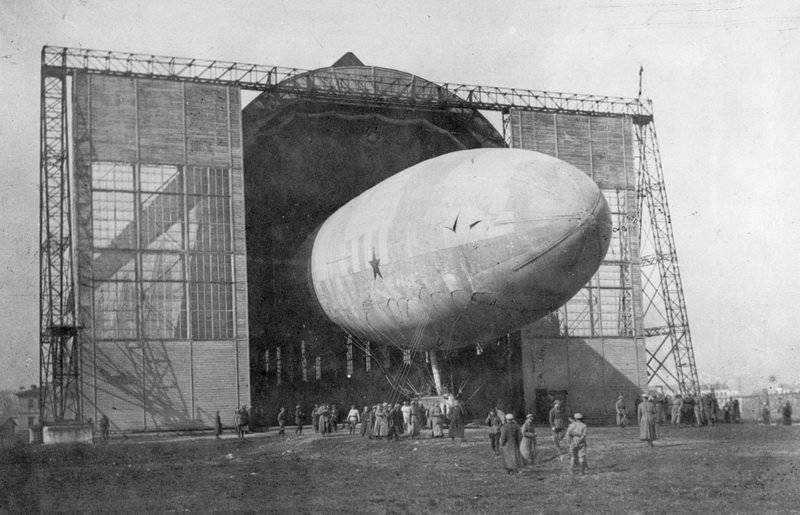 Airship "Komsomolskaya Pravda"
July 25 The 1930 of the year the airship was built was filled with gas and on August 29 completed its first flight. The commander of the ship was E. M. Oppman. Already 31 August 1930, "Komsomolskaya Pravda" first flew over Moscow. In total, in 1930, the airship managed to make 30 flights, and next year, 25. These training and agitation flights were very important for the accumulation of experience in the operation of airships and the education of aeronautics personnel.

At the end of 1931, a specialized organization called Dirigiblestroy was created under the GU GVF. This organization was supposed to unite the efforts of different groups of specialists working in this field, as well as take up the planned deployment of work in the field of design and the subsequent construction of Soviet airships. Also, the organization had to devote time to conducting research on aeronautical topics and improving the methods of operation of airships.

Already by May 1932, the new organization released the 3 soft airship - the USSR B-1, the USSR B-2 Smolny and the USSR B-3 Red Star, which were mainly intended for teaching and agitation flights, as well as the accumulation of experience use of airships in the national economy. The minimum volume of the airship B-1 was 2 200 cube. meters, airships B-2 and B-3 5 000 and 6 500 cube. meters respectively. Also, the airships differed from each other engines, while having the same type of design. The shell of all three airships was made of three-layer rubberized matter and had an internal partition that divided the volume into 2-e equal parts. This partition made it possible to reduce the gas transfusion along the shell when the aircraft was trimmed. 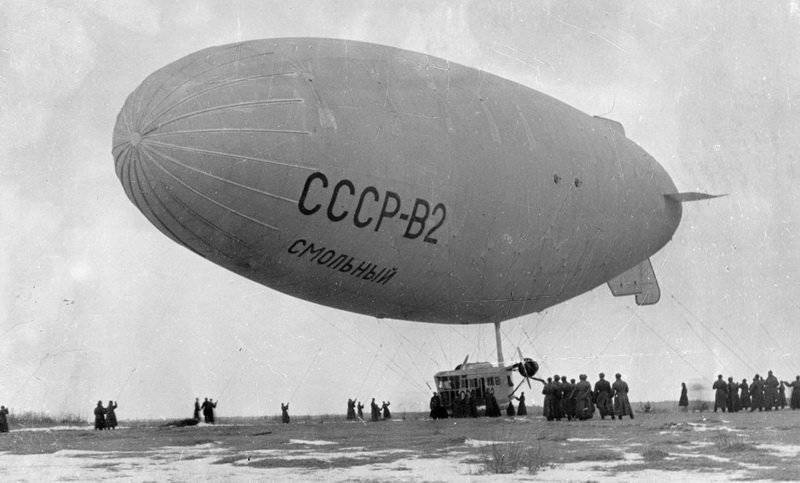 USSR airship B-2
On these three airships, a series of successful flights were carried out on the routes Leningrad - Moscow - Leningrad, Moscow - Gorky - Moscow, Moscow - Kharkov, and others. All three airships, as well as the USSR that joined them, B-4, passed 7 in November on a wake column over Red by area. In terms of their flight characteristics, the Soviet airships B-2 and B-3 were almost as good as their foreign counterparts of this class. All this suggests that despite the limited experience and the lack of a sufficient number of qualified specialists, by the year 1933 the USSR was able to fully master the technique of designing, manufacturing and operating soft airships.

One interesting case is connected with the USSR airship B-2 "Smolny". 6 September 1935, the airship that was on the airfield of Stalino (Donbass), was torn off from its camp by an overflowing squall. However, all the 60 corkscrew anchors that held him were pulled out of the ground. The airship commander N.S. Gudovantsev grabbed one of the cables and was able to reach the gondola at the height of 120 meters, where the 4 crew member and 11 sightseers and pioneers were at that moment. At the height of 800 meters the engines were started. After that, having waited adverse weather conditions in the air, the airship landed safely after 5 hours 45 minutes. For this heroic act Gudovantsev was awarded the Order of the Red Star.

Over time, a new goal was set before Dirizhablestroi — the development of production of semi-rigid type airships, which, in comparison with soft devices, were far more responsive to the requirements of concrete use in various sectors of the national economy. In order to speed up the fulfillment of this task in 1932, the Italian Umberto Nobile was invited to the USSR to lead the technical management of the project. 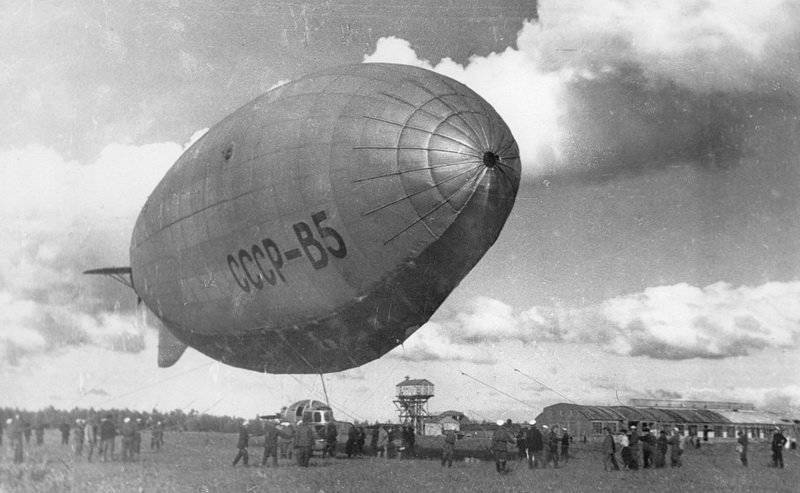 USSR airship B-5
Already at the end of February 1933, the first semi-rigid airship B-5 in the USSR was ready. 27 April 1933, he first took to the air. This airship had a relatively small size, its volume was only 2 340 cube. meters This was explained by the fact that the USSR B-5 was conceived as a semi-rigid airship, intended for practical acquaintance of the Soviet designers with the Italian semi-rigid system, as well as identifying the difficulties that could be encountered in the USSR in the production of a larger airship. In addition, B-5 planned to conduct training for ground personnel and pilots.

In May 1933, after passing a series of state acceptance tests that were deemed successful, the B-5 was accepted into the civil air fleet. In 1933, he made more than a hundred flights, which proved that this airship possesses a set of good stability characteristics, as well as control over the entire range of encountered weather conditions. The experience gained during its construction and operation became the basis for the construction of the USSR's largest airship B-6 Osoaviakhim.

The design of the USSR B-6 was to take the Italian airship type N-4, with the introduction of a number of improvements in its design. The size of the airship was 18 500 cube. meters, length - 104,5 m., diameter - 18,8 m. The assembly of the airship lasted for 3-s months. As a comparison, it can be noted that in Italy the construction of airships of similar sizes on more equipped airships bases took 5-6 months. 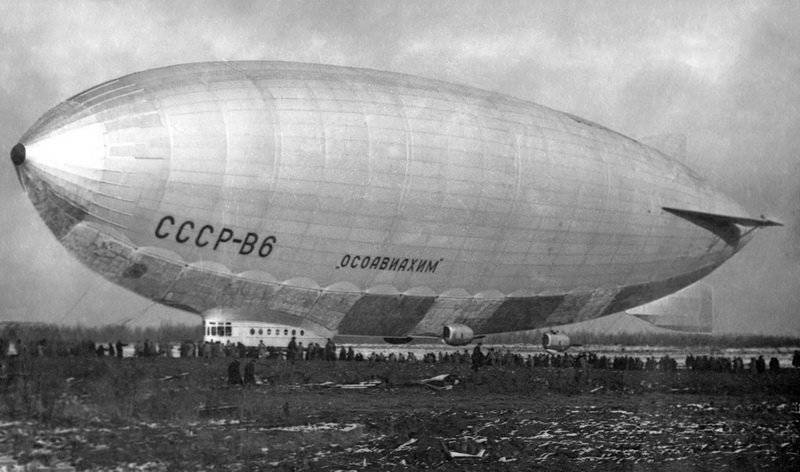 USSR airship B-6
His first flight, “Osoaviakhim” made 5 on November 1934 of the year, Nobile drove the machine, the flight duration was 1 hour 45 minutes. Subsequent flights proved its high flight performance. Passenger capacity of the airship was 20 people, payload - 8 500 kg., Maximum speed - 113 km / h., Maximum flight range with full load - 2 000 km. All this made it possible to consider B-6 as the first Soviet airship, which could carry out specific national economic tasks. With the use of this airship in the USSR, they planned to open the first long-distance passenger air lines.

A convincing proof of the suitability of the B-6 for long-distance passenger traffic was the established world record for the duration of the flight - 130 hours 27 minutes. However, these plans did not come true. In February, 1938, the airship crashed during a training flight to Petrozavodsk, 19 died from its crew members from 13. 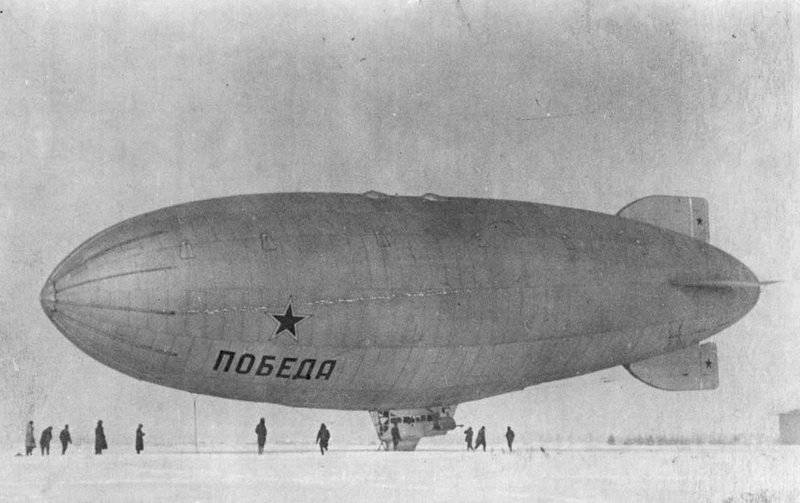 Airship "Victory"
Later, in the USSR, the X-NUMX airship, the soft construction B-4, B-10, B-12 bis “Patriot”, as well as the airship “Victory”, were built. The airship "Victory" was created in 12 for 1944 months, its volume was 6 5 cube. meters The airship was intended to transport gas for balloons. After the war, it was quite successfully used to search for sunken ships and unwashed mines.