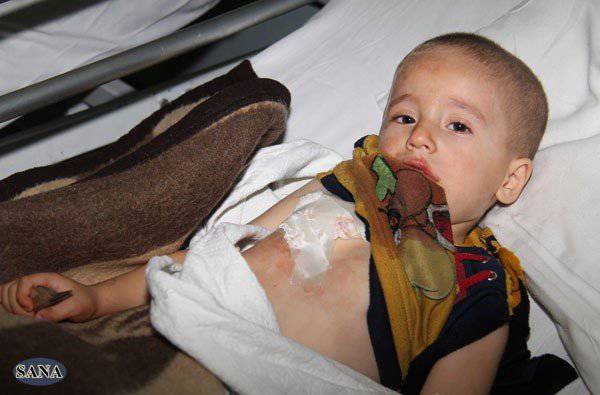 The peaceful Shiite family lived their everyday life in the suburbs of Damascus, Seid Zeinab, when pseudo-revolutionaries, so beloved by the West, broke into their home. When the eyes of a four-year-old boy began to kill his parents and grandmother, he approached one of the terrorists and hit him with his tiny fist. More baby could not do anything. The terrorists hanged him and filmed the execution on video to frighten the “infidels”. It was a family of Iraqi refugees, who were sheltered by Syria a few years ago. They had seen a lot in “émocratic” Iraq and believed that they had found a safe haven, but even there “democracy” had got them.

In another video - the boy is much older. He is embraced by the so-called romance of the "revolution", and the terrorists give him a combat mission. He must cut off the head of a captive military. And the boy goes to work. He doesn’t work out for a long time, and adult bandits finish off the prisoner. The boy is alive, but his soul is already irreparably crippled - adult “democrats” have made him a juvenile sadist.

In July of this year, a lot of noise was caused by the murder of Sari Saud’s child in Al-Sabil quarter of Homs city. He died when one morning, not foreshadowing anything wrong, went to the store for bread. Al-Jazeera used the boy’s death for her own purposes and blamed the Syrian army for it. However, his parents did not want to be obedient tools in this terrible, bloody game. His mother appeared on Syrian television and, with tears in his eyes, said that one of the terrorist groups had killed her son. Only now the false report of Al-Jazeera was picked up by the Western media, and the desperate voice of the mother who lost her son was unheard.

Now in Homs a terrorist Mazen Majed Dubdub was captured, who killed the child. He confessed not only to this crime, but to many others committed by his group in Homs. The boy was killed in order to dump his murder on the Syrian army - that is, for the sake of the false propaganda of the "rebels". The arrested terrorist confirmed that at the time of the murder of the Syrian military in Al-Sabil quarter was not. Not heard in the West, the mother was completely right. She called on the forces behind the militants to stop using her son’s political assassination and stop supporting terrorists.

Last week, Leila Zerrougui, Special Representative of the UN Secretary-General for Armed Conflict and the Status of Children, arrived in Damascus at the invitation of the Syrian government. Her task was to get acquainted with how the tragic events in Syria are reflected on the youngest members of society. She met with the families of the dead children, with the people who were forced to leave their homes with their children because of the threats of terrorists and now live in temporary accommodation centers, negotiations with the ministers of the Syrian government.

Leila Zerrougui highly appreciated the efforts of the Syrian leadership, which is trying to do everything to mitigate the consequences of the crisis for children, creating new schools and children's clubs for them. Despite all the difficulties, to the terrible damage caused by the terrorists, to the fact that they burn libraries, school textbooks and printing houses - all the same, schoolchildren were provided with necessary textbooks. The educational process is going on, despite the fact that many children now live far from their homes and schools, and many have lost all documents. Such children

admitted to schools at the place of temporary residence, despite the lack of documents - they took exams to be divided into classes.

Yes, it was hard work. At the meeting, Leyla Zerrougi and Syrian Minister of Education Gazwana Al-Waza announced heavy statistics. 2362 schools destroyed, looted, captured or blown up by terrorists. In many of them, the gangsters made their headquarters, and now the vacated buildings are in need of serious repair. And some schools are generally no longer subject to recovery.

Another problem is that school buildings had to be given as temporary accommodation centers for refugees. Such schools 1956.

120 teachers were subjected to terrorist attacks, killings, abductions, torture. 112 of them died. Someone miraculously managed to save.

Leila Zerrugi visited the Al-Bteha school in the village of Al-Wafden, which the terrorists shot at the end of November with mortars, killing and wounding 29 people - a teacher and students. She called on international organizations to protect schools from attack. But it is unlikely that this noble appeal will be heard by those who are arming and supporting informationally and politically gangsters, for whom it is all the same, that to smash is a police station or school, for which it is all the same, who to kill - a military man or teacher, for whom it is all the same what to blow up - the building of the Ministry of Internal Affairs or the school building ...

And here I would like to once again recall the sensational crime in the US, when an armed gangster shot students and teachers. After all, it is impossible not to draw parallels between the crime in the Syrian al-Wafiden and the American Connecticut.

Terrorism is everywhere terrorism, in the States or in Syria, in Norway or Serbia, in Russia or France. But when the United States proclaims terrorists as “heroes” and others as criminals, some child murderers call them “rebels” and “fighters against dictatorship” and others as villains — values ​​are displaced, and as a pitiful result is the death and tears of innocents.

America, of course, hurts you, but feel the pain of a distant Syrian people! Stop the support of insane terrorists for political purposes! And think that the life of children is not worth all your plans to impose "democracy", not worth all your profits and benefits that you can derive from the fight against undesirable states. After all, those who committed crimes in Connecticut and in Al-Wafiden - the same essence.

By supporting terrorism in some countries, it is impossible to keep it in others, and the policy of double standards only generates more terrorism, from which to suffer innocent. Both in Syria and in the USA, children cry the same ...