The creative class has turned into a dull bunch 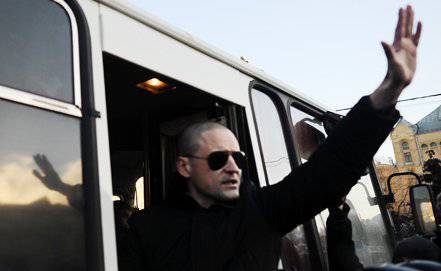 Opposition rally last weekend. Does the opposition hear the people? Where is her forte? Vladimir Soloviev and Anna Shafran discussed this and much more with the Vesti FM radio listeners.

Solovyov: For some reason, many people ask me about my attitude to what was on the Lubyanka. My attitude is this: terribly ridiculous looks everything happening. Look, several media outlets worked in the announcement mode of inflating hysteria and public surge. That is, "Gazprom's echo" just every time said: "Here, soon it will start!" That is, it is no longer newsThis is an announcement.

In parallel with this, an action of communists took place in Moscow, to which about the same number of people came without any promotion, without any hysteria. The Communists ’action was covered only, probably, by the All-Russian State Television and Radio Broadcasting Company; At the same time in any election, the Communists are gaining many times more votes than any representative of the "swamp". At the same time, notice how interesting it is that our press, as it was from 90's, is ultimately liberal at its core and, of course, not objective at all, and it has remained so. I am not talking now about power, I am talking about communists, who are also against power.

What was in the Lubyanka - in principle, an absolute failure. Why? There was no idea. It was uncreative. That is, people claiming to represent the interests of a certain creative class turned out to be a dull and boring, mediocre gathering. Besides, where did the people go all? Where to share those who were interested to listen? Where is Yavlinsky? Where is Ryzhkov? Now who came out at all? A number of former.

You see, when Ponomarev and Udaltsov, whose parents during the Soviet era were big-big figures, are trying to talk about something, then for me it is such a dream of the politburo offspring of a happy past. Such, you know, genetically incorporated memory of the party nomenclature, back to tear into places heated by grandfathers. Sobchak and Yashin? Well, what revolutionaries? "We are now in Morocco, then to the Lubyanka, because somewhere else." What revolutionaries, who once again declare: "And we have New Year's holidays! We are all abroad." No, please, this is the right of any person. Go, rest, flag in your hands. But it’s funny when you consider yourself as fighters against the regime, being yourself an absolute and natural part. It’s just that within the political stratum they were marginalized, but they never became politicians.