Gold and the "end of the world" 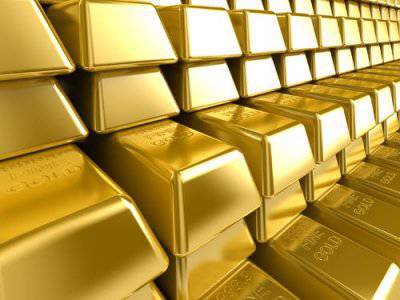 The American people and members of the US Congress have long had doubts about the fact that there is something left in the storerooms where the official gold reserve of the USA is stored, and if there is something there, then this “something” is gold. In 2012, a series of publications was held in the world media, in which it is irrefutably proven: a large number of fake bullion appeared on the world gold market, where the “yellow metal” was replaced by tungsten having the same specific weight as gold that banksters have long since launched a hand into the gold bins of the American Treasury (the official gold reserve is on the balance sheet of this department with 1933 of the year).

The last time the American “people's choices” saw with their own eyes the gold bars of Fort Knox (the largest repository of the official reserve) in the early 1950s, i.e. six decades ago. Under the pressure of irreconcilable criticism of the Fed by Congressman Ron Paul in the outgoing 2012, they managed to make a decision on randomly checking the US gold reserves.

Details about the just passed the test is very small. Something leaked to the press about the verification of the treasury gold located in the basements of the New York Fed in Manhattan. About half a dozen employees of the Mint, the office of the Inspector General of Finance and the Federal Reserve Bank of New York participated in the process. As well as employees of the Office of Public Responsibility (the investigative body of the Congress) The repository is located near 530 000 gold bars of which 34 021 belong to the US Treasury (the remaining bars are gold from other countries). The team of auditors selected more than 350 ingots from the cache, which they verified by drilling. It is surprising that the test is very “selective”. Approximately 1 of 100 ingots were tested. But the main reserves of gold treasury are in other vaults - Fort Knox, West Point, Mint in Denver. I personally did not find any information that similar studies of ingots were carried out in these vaults. Those. the actual proportion may not be 1: 100, but 1: 1000.

It is rather strange that the auditors reduced the entire audit to the identification of fake (tungsten) ingots. Experts believe that ultrasound testing methods are quite suitable for such detection, there is no need to drill. With the help of an ultrasound scan, it would be possible to quickly and cheaply check the entire stock of the treasury. In my opinion, the American authorities are playing a play that can last for decades and cost a lot of money (each drilling operation involves gold losses and other costs). Generally speaking, drilling or ultrasound is an important, but not the most important part of this audit. The main thing is working with documents and identifying what financial and commercial transactions were done with state gold. However, nobody stutters about this. Even Ron Paul.

Well, what is the connection between the said "limited" audit of gold and the "end of the world"? It is said that the play on drilling ingots was completed in the summer, and the results have not yet been made public. Then the phrase flashed in the American media: “The Ministry of Finance has so far refused to disclose what has been established by the audit. He says that the results will be announced by the end of the year ”... Let's pay attention: not in the autumn, not in January of the 2013 of the year, but at the end of the year, that is, in December of the 2012. Could this mean anything?

About the fact that the German authorities decided to transfer their gold reserves from foreign repositories to their own territory, in the fall of this year a lot was written. Currently, Germany ranks second in the world in official gold reserves - 3,4 thousand tons (more precisely - 3.396 tons). However, most of the "yellow metal" is outside the country. 31 percent German gold is stored in Germany, 45 percent in the USA, 13 percent in the UK and 11 percent in France. The question was raised in the Bundestag in January of this year, but the plans for the repatriation of gold unexpectedly ran into a dull opposition. Someone really does not want gold to be returned.

The first line of opposition was the central bank of Germany - the Bundesbank, on whose balance sheet the official gold reserve is listed. The authority of the parliament of Germany was not enough to force the Bundesbank to begin a repatriation operation. The country's central bank began reluctantly to act only after the decision of the German Federal Court, which obliged the Bundesbank to conduct an audit of foreign gold, moving small batches of metal from abroad and conducting research and melting of gold bars on German soil. Total 150 tons over the next three years.

The second line of opposition to the authorities of Germany was the Federal Reserve, in the basement of which German gold is stored. At first, the resistance was verbal. In particular, CNBC news agency close to the Federal Reserve was used. CNBC’s chief editor, John Carney, released an editorial that contained an extremely intriguing statement: “It really doesn’t make any difference whether the Fed of New York is holding the gold of the German central bank or whether it is clean. If the Fed says it is there, it is just as good for all practical applications for which it may be needed. It can be sold, lent, used as collateral, used to cover liabilities and taken into account as bank capital, regardless of whether it exists or not ... For almost every conceivable operational goal, the actual existence of gold in Fort Knox or in the Fed's vault irrelevant. The value here is record keeping. So while the Fed says that the Bundesbank has an amount of gold equal to X, the Bundesbank can act as if it owns gold, even if it miraculously fell into a galactic black hole, which absorbs gold. ” And further: “I am sure that the Bundesbank understands this well enough, even if the German court does not understand it. There is nothing that could be gained from inspecting gold. If it is there and it is pure, knowledge of this will not change anything. And if there is no gold, well, the result can be chaos, because the credibility of the gold depositories of central banks will evaporate instantly. ”

After such a "rebuke" the Germans could not continue to insist on receiving gold, then more weighty arguments were put into motion. Namely the forces of nature. In October of this year. America’s east coast has been hit by Hurricane Sandy. New York is also in the hurricane zone. Conspiracy theorists immediately began to hint that the hurricane was “man-made”, that someone really needed it and this “someone” - the Federal Reserve. Allegedly, one of the main events related to Sandy's hurricane was either destruction, or destruction, or flooding of the underground storage of the Federal Reserve Bank of New York in Manhattan. US media reports on this subject are very inconsistent. For example, a message dated 30 in October 2012 in the electronic edition of The Daily Bail, part of the CNBC empire: “Stunning news from Washington, DC - At a hastily organized press conference on Monday night, Federal Reserve Chairman Ben Bernanke announced an explosion at Con Edison station in New York City, which led to the complete destruction of the entire underground repository with gold reserves in Germany, thus negating all efforts Germany to repatriate gold ... It is reported that gold reserves were not insured. "

However, according to some experts, there was no hurricane. And the media, controlled by the owners of the Fed, simply created an “informational image” of the dispersed element. Actually, in New York at the height of the hurricane on Monday, in the evening, there was only a gusty wind, in some places it was raining heavily and at times a little rain — that was all. On the Internet there are a lot of funny photos taken by the Americans themselves, showing the “sweep of the elements”. According to official reports, 13 people died as a result of a hurricane in the US and Canada. Try, check, especially if another country is taken into account! By the way, in one of our little Krymsk, according to official data, from 150 to 170 people died. As for the explosion at the Con Edison transformer station, which left several million people without electricity, there are serious signs that this event was “man-made”. Something like September 11 in "thumbnail."

Unfortunately, no further clarification of the Manhattan gold deposit followed. The Fed did not even come up with the usual reassuring assurances: that, they say, everything will be fine, the vaults will be restored, gold will be returned, etc. An ominous silence. Germany also remains deeply silent. There was a scandal in the air. Bernanke is clearly not going to return the gold to the Germans. However, maybe already nothing to return?

What further "natural disasters" may follow? It seems that someone in America has become adept at creating such “disasters”. What is, for example, 11 September 2001 of the year. This event may indirectly relate to the theme of German gold and all gold in general, located in the basements of the New York Fed. First, after the collapse of the skyscrapers of the International Trade Center, in a strange way, several tons of gold disappeared from the basements of the ITC (it was not official, but private gold). Secondly, also under the rubble of skyscrapers, some documents related to the investigation of illegal operations of the FBI and the CIA with gold mysteriously disappeared. After the disappearance of the documents the investigation was terminated.

And the last. A year after the tragic 11 events of September 2001, the German edition of the Neue Züricher Zeitung quoted the legendary American billionaire Warren Buffett, who predicted that in the next 10 years it would reach the first terrorist attack using nuclear weapons on american land. It turns out 2012 year, to the end of which there are a few days left! If such a device explodes in New York, then the gold reserves stored there will become radioactive and Germany will lose the desire to repatriate them. Buffett's forecast will find some meaning. If not for the whole of humanity, then for the residents of New York the end of the world can be quite real. Being near a Federal Reserve repository becomes physically unsafe.