December 19 2012
17
Fuel-saving technologies are beginning to enter the arms market. In particular, in the United States, work is in progress on the creation of the first models of infantry fighting vehicles, which would be activated with the help of hybrid propulsion systems. A few hundred liters of fuel for every hundred kilometers of road is a luxury that even the richest armies and countries of the world cannot afford. Currently, the American army is actively developing hybrid engines, which, depending on the type of terrain along which the vehicle moves, can reduce fuel consumption by 10-20%.

At first glance, this figure is not particularly impressive for the average man, but if the fate that the American army is armed with more than 6 thousands of infantry fighting vehicles, and this army has been quite active in fighting lately, it can be assumed how much money these armored monsters burn every day. New hybrid infantry fighting vehicles are developed by BAE Systems and Northrop Grumman Corporation, which are working together on a promising GCV project - Ground Combat Vehicle. In addition to the already mentioned reduction in fuel consumption, new infantry fighting vehicles have a number of other advantages that attracted the American military: new cars have better security, dynamics, are less capricious in maintenance, emit a lower noise level, and most importantly, they are simpler and cheaper during operation. This is important if we consider that the announced prices for new hybrid BMPs will be 10,5 million dollars (together with the costs of their operation). This amount is about 5 times the cost of the M2 Bradley infantry fighting vehicles in service with the US Army.

For the first time that the US Army began to formulate a strategy and procurement requirements for the new program of Ground Combat Vehicle, it was announced December 3 2009 of the year. According to Major General John Bartley (head of the army integration program), the BMP will be the first product of the new program. It was assumed that its development will be completed within 7 years. The new American program Ground Combat Vehicle has changed the program Future Combat Systems, which was completely closed by the US Department of Defense. 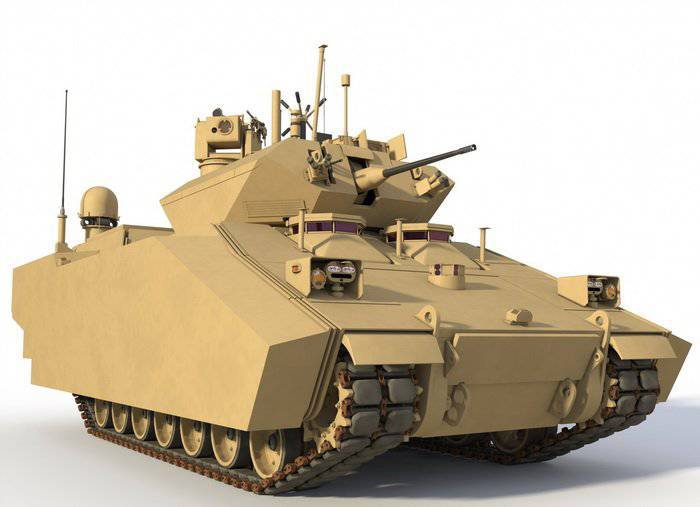 Draft infantry fighting vehicle proposed by BAE Systems
The new group of combat and transport vehicles being created should best meet such important criteria as ensuring survivability, protection, mobility (system survivability, protection and mobility) taking into account the appearance of new technologies in the future, Bartley said. At the same time, most of the requirements for the new technology were recognized as “technologically achievable”. Paul Menhei, a representative of the army integration program, noted that they would not impose any particular weight restrictions on promising combat vehicles, while the developers themselves would have to ensure the transportation of new infantry fighting vehicles by sea, rail and air transport (using C-17 cargo aircraft ). Similarly, the army abandoned the right to dictate terms for choosing a base of new equipment - tracked or wheeled.

Considering that promising combat systems should have sufficiently good mobility in urban conditions, it was suggested that the mass of new infantry fighting vehicles would not exceed the mass of modern models of main combat tanks. Quite serious requirements to achieve high firepower of the machine can push its creators to use 30 or 40-mm automatic guns and coaxial M-240 machine guns of 7,62 mm caliber. In addition, the machine must be equipped with an independent station weapons for the commander of the BMP and wireless weapons control system. At least, information about this was contained on the slides that were shown during the briefing.

It should be noted that the development of BMP is not the sole purpose of the GCV program. In addition to the infantry combat vehicle itself, it is intended to develop on its base a modern ACS and so-called secondary car. Regarding the self-propelled artillery, it is known that the caliber of its guns will not be less than 100-mm, but on the secondary machine there is practically no information. At the moment, engineers and military did not publish any specific information on this subject. Most likely, under this rather strange term hides a kind of universal platform for repair and evacuation, command and staff, sanitary, transport and other similar machines. 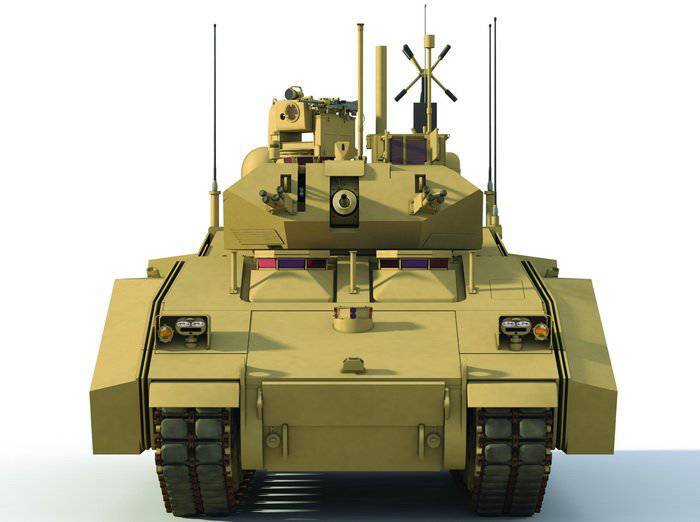 Draft infantry fighting vehicle proposed by BAE Systems
According to the plans of the Pentagon, the new BMP is to replace the Bradley BMP in the army, which was created under the impression of the Soviet BMP-1 and entered service in the 1981 year. In August 2011, the US Army awarded 2 a two-year contract for the creation, construction and subsequent testing of two technical demonstrators under the GCV program. The contracts are issued to two alliances: BAE Systems and Northrop Grumman (450 million) and General Dynamics and Lockheed Martin (440 million dollars). At 2012, the year in the military budget for research and development in the framework of the GCV program was provided for another 449,4 million dollars. Already in the next 2013, the US Army should decide on which of the two alliances to allocate money for a promising platform with the provision of a four-year contract for the full development and testing of BMPs. Serial production of the selected combat vehicle is planned to expand with 2018 year.

The estimated crew of the new BMP will be 3 man, while the machine will be able to take on board the 9 man landing. In addition, there was a requirement to work out the use of "non-lethal weapons" (non-lethal weapons) and equip them with a new combat information system (Ground Soldier System), which would provide both the crew and the paratroopers with a high level of "situational awareness". At the same time, representatives of the American Army noted that the requirements for infantry fighting vehicles are subject to change. In turn, according to the developers, the GCV program initially provides for the possibility of future modernization, and its concept and basis will remain unchanged for up to 40 years.

The development of the Alliance BAE Systems and Northrop Grumman suggests the use of a new hybrid installation, the Hybrid Electric Drive (HED) with 1100 kW, instead of the usual engine. This installation was created by QinetiQ and allows you to save up to 20% fuel. This engine has a smaller number of parts, a simpler design, low weight and volume, as well as a low noise level compared to other hybrid installations. In fact, it can be called silent, which is important enough for covert movement and disguise. At idle, it consumes 17,5 liters of fuel per hour, which is less than a liter of 20-22 than would be required if a conventional BMP engine had the same mass. It is worth noting that the BMPs spend a large amount of time in this mode, waiting for the right moment or crew and keeping all the onboard systems and devices on alert. So low fuel consumption at idle is a significant advantage. 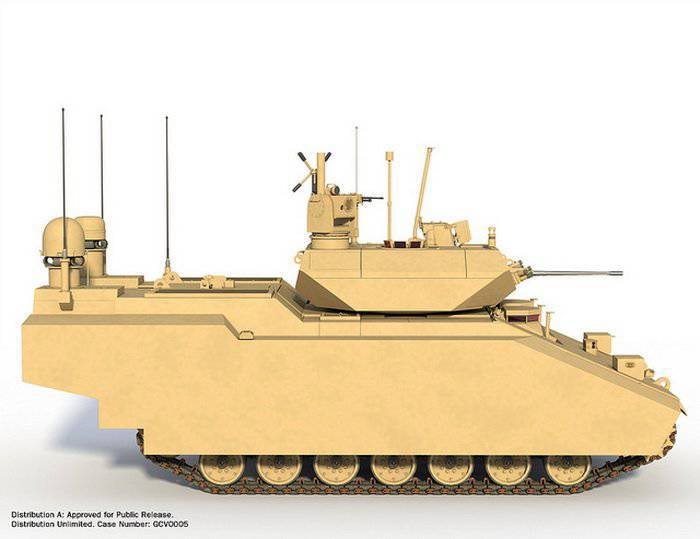 Draft infantry fighting vehicle proposed by BAE Systems
Indeed, the proposed hybrid electric motor reduces the cost of BMP for fuel, but its rather impressive weight in 63,5 tons does not allow talking about “automobile” fuel consumption. The volume of tanks BMP is about 965 liters, and the power reserve of the machine - 300 km, which means that it "eats" about 320 liters of fuel for every 100 km. Yes, you heard right, the weight of the armored vehicle exceeds 60 tons, which is more suitable for the main battle tank. For example, the same Bradley BMP weighs about 30 tons, although it also contains less people on the 3 and presents a lower level of protection to the crew and landing force. At the same time, booking BMPs created under the GCV program should be at the level. In the application of the Pentagon, the maximum weight of the future BMP was not specified and, it seems, the developers in this matter have tried immensely.

It is assumed that the BMP will receive a wireless digital communication system, as well as a powerful artificial intelligence technique for conducting surveillance and intelligence. Thanks to the use of a hybrid engine, the armored vehicle will be able to change its speed smoothly and move fairly quietly, which is another advantage of the BMP, especially during maneuvers at night. In this case, the declared maximum speed of the machine should be 70 km / h, and from 0 to 30 km / h it can accelerate in just 7,8 seconds.