December 21 2012
5
Reduce the sound of a gunshot weapons It was an old dream of many designers. What tricks did not go gunsmiths only so that their sample could be called silent. Among all the variety of truly ingenious designs there are quite a few samples and domestic production. Many of them are quite well known, some are widely used, and some have remained in individual experimental specimens. Let's try to walk on stories development of domestic silent weapons in this series of articles, well, and as far as possible, we will examine in detail individual samples. Unfortunately, I personally can’t promise that absolutely all variants of silent weapons will be considered, since I’m more than sure that with a couple of dozens of samples about which nothing is known it’s easy to type, but we’ll dig and get to the bottom of something interesting. . In the meantime, let's start with the officially first silent weapon on the territory of the USSR, namely the Mitin brothers revolver. 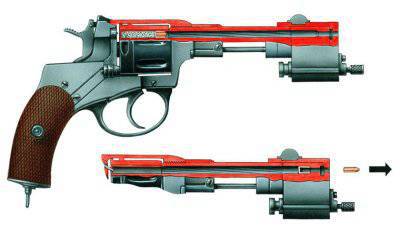 This weapon immediately stands out against the background of other samples by the fact that, firstly, it is a revolver, and secondly, it is a revolver with two drums. These two drums rotate simultaneously on the same axis one, serves to hold ammunition, while the second is the receiver for the “glass” of powder-locking gases in which the bullet is placed. Created this weapon was still in the distant 1929 year, the spread is not received. The basis for the silent revolver Mitin brothers became revolver "Nagan". The choice of this particular weapon was not accidental and not at all because of its widespread occurrence, but because of the design of a revolver, in which, when cocked, the drum “hit” the barrel with its chamber, which reduced the breakthrough of powder gases between the drum chamber and the barrel. shot time. Naturally, the addition of a very difficult and far from the most compact type of weapon with an additional muzzle device had a very strong effect on the convenience of handling weapons. So, the balance of the revolver changes significantly, besides, the weight of the weapon is obviously increasing, and there is also a need to replace the holster for the revolver. Nevertheless, it is impossible to deny the brilliant simplicity of the device for suppressing the sound of a shot, which was suggested by the brothers Mitya, or rather, not even the device, but a set of improvements that resulted in a significant reduction in the sound of the shot. 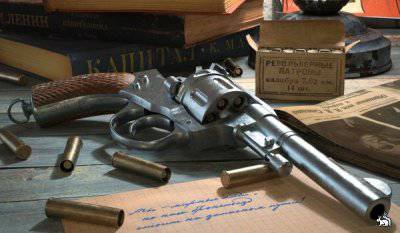 First you need to start with the ammunition that was used in the revolver. The basis for the cartridge was the same cartridge for the Nagan revolver, but it was slightly modified. The bullet of the revolver began to consist of two parts, the bullet itself and the “glass” which compressed the bullet. When fired, the bullet pressed by the “glass” passed along the rifled barrel of the revolver, corresponding to its caliber “glass”, then the bullet hit the second drum of the revolver, which had a chamber with a varying diameter. So, at first the chamber was made equal in diameter to the “glass” of a bullet, and then there was a sharp transition to the diameter of a bullet without a glass. Thus, during the passage of this transition, the bullet was separated from the “glass”, and he himself locked the powder gases in the barrel. To call such locking reliable can not in any case. Naturally, the powder gases broke through and broke through quite actively, because there were many ways out, but, nevertheless, the sound of the shot was significantly reduced.

If we speak in the context of the development of firearms, the development of the Mitin brothers was not the first attempt to lock down the powder gases in the weapon channel, but they created the first multiply charged sample, which no one had done before. So it is impossible not to let the “lame man”, but a breakthrough in a silent firearm. In the future, the locking of powder gases became one of the main directions in the development of silent weapons, although they were no longer locked in the barrel bore, but in the sleeve, but this is already listed among other designers. The brothers Mitya noted in the creation of another silent model of weapons, based on the revolver "Nagan" already with the device silent shooting. But about this sample in one of the following articles.