Russian airships up to 1917 year

December 18 2012
6
Airships (from the French word dirigeable - controlled) are called aircraft lighter than air. They are a combination of an aerostat with a propeller (usually a screw drive with an internal combustion engine or an electric motor), as well as an orientation control system (so-called steering wheels), through the use of which the airships can move in any direction regardless of the direction of the wind flow. Airships have a streamlined elongated body, which is filled with lifting gas (hydrogen or helium), which is responsible for creating aerostatic lifting force.

Unlike airplanes, by the beginning of the First World War, airships already represented a formidable operating force (while light reconnaissance aircraft could only take with them a few small bombs). By the beginning of the war, one of the most powerful aeronautical powers was Russia, which had a large “Aeronautical Park” in St. Petersburg with more than 20 airships and Germany, which at that time possessed 18 aircraft of this type. 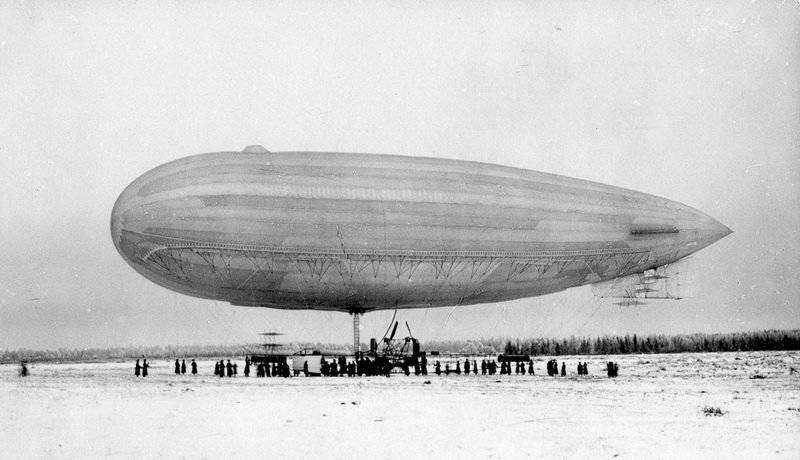 Airship "Albatross"
During the war, military airships were directly subordinate to the main command. Sometimes they were attached to the fighting armies and fronts. At the very beginning of the war, airships were used in combat missions under the guidance of officers of the General Staff commanded to them. In this case, the commanders of airships were assigned the role of watch officers. It is worth noting that due to the success of the Schutte-Lanz firm and the successful design solutions of Count Zeppelin Germany in the field of airship construction, it had a significant superiority over all other countries of the world. The correct use of this advantage could have brought Germany very great benefits, in particular for the implementation of deep intelligence. German aircraft could cover 2-4 thousands of kilometers at speeds of 80-90 km / h. At the same time, the airships could bring tons of bombs on the enemy's head, so only the arrival of one 14 airship on August 1914 on Antwerp led to the complete destruction of 60 houses, and even 900 houses were damaged.

К stories A Russian proverb is very well suited saying that Russians slowly harness, but drive fast. In the 19th century, controlled balloons never rose to the Russian sky. Many, especially Western aeronautical researchers, believe that this was a consequence of the backwardness of Tsarist Russia, but this statement is not true. Almost all the necessary equipment was already produced in Russia, as in the developed countries of Europe, but they decided to wait with the airships in order not to waste government money. It was decided that it would be better to take ready-made and the most successful designs, and only then adapt them for their own purposes and realities of operation.

Only in 1906, the contours of the airship began to emerge, which would be suitable for copying and subsequent adaptation to use on the territory of Russia. The General Engineering Directorate of the Russian Empire specially commissioned a whole delegation of engineers and specialists to France for the on-site development of the most advanced experience of airship construction. The choice in favor of France, and not Germany with its giant Zeppelins rising into the sky, was explained by the fact that already in those years Germany was becoming a geopolitical opponent of the Russian Empire, and all the latest German military developments and experiments were surrounded by a veil of secrecy. At the same time, a “total curtain” did not exist, and the General Staff received information through the intelligence network and it was rather alarming. Such giants as Zeppelin airships, with one blow could mix with the land a whole Cossack regiment or severely destroy the center of St. Petersburg. 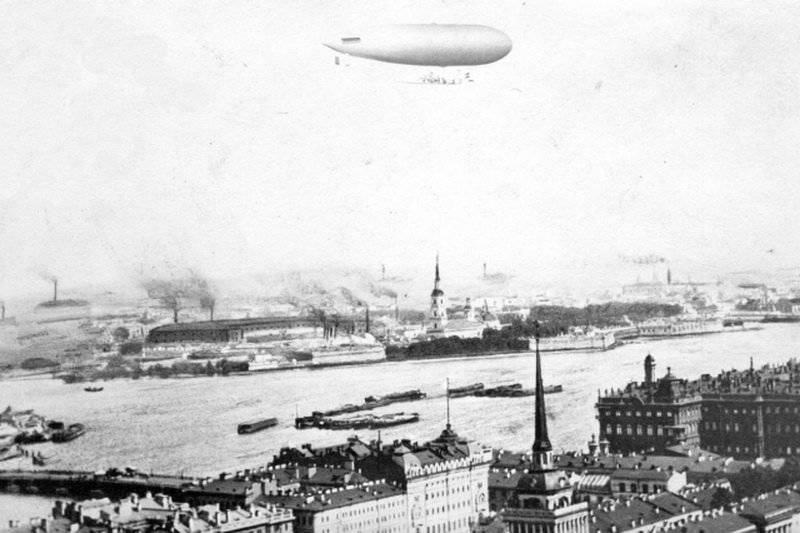 The airship "Albatross-2" over Petrograd
It was then that the moment came when Russia needed to take action, further delay could result in serious consequences for many military units and cities of the country. Here comes a moment when many foreign (especially German) aeronautics researchers do not agree much, and compare such shortcomings of lies. They begin to consider airship in the Russian Empire separately from development aviation generally. This does not take into account the fact that the country's backwardness in the construction of bomber airships was more than offset by the development of an air fleet of biplanes armed with heavy machine guns. For German airships, meeting such aircraft (especially several) was tantamount to death.

Only this can explain the fact that the German Zeppelins never flew to Russia. Russian biplanes could very effectively deal with them. For the first time in the history of aviation, Russian pilots began to use special equipment to deal with giant airships: alternately setting targets, pilots turned the airship cab into a sieve using their powerful machine guns, after which they lost most of the command and control. In the second approach, the aircraft could use the latest weapon at the time - unguided incendiary missiles. Although they could have been called missiles with a stretch, most of all they looked like modern firecrackers "on a stick" only of large size. Such missiles could set fire to the airship with a single volley.

If we talk about Russian airships, they were produced more according to the principle “to be”. In 1908, the very first domestic airship with the saying name "Training" rose into the sky. No outstanding results were then expected from this car, as it was a full-fledged test bench. At the same time, the Uchebnyi had a decent rate of climb for those years, overtaking the Zeppelins in this respect and was very often used for training aircraft crews. 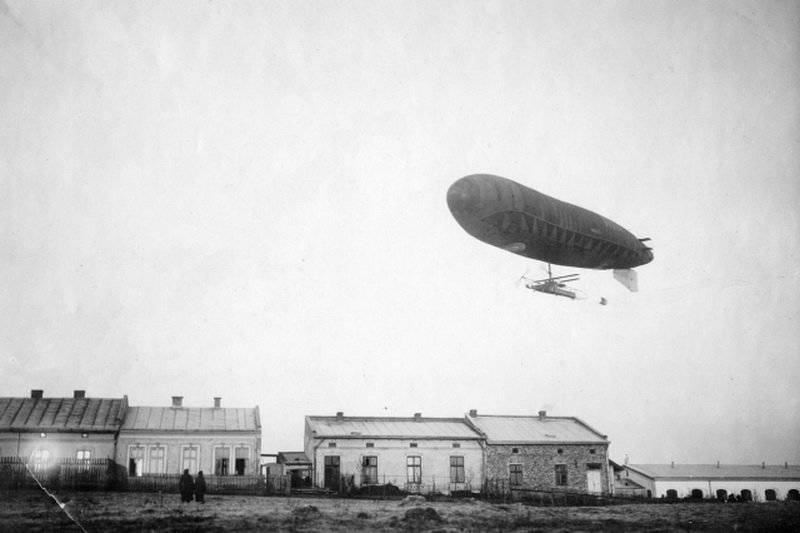 Condor airship in flight
In 1909, Russia acquired a semi-rigid airship in France, which was named the Swan. On this airship, not only their tactics of use were perfected, but also the general suitability of airships for participation in hostilities. At the same time, the results were disappointing. In the case of the enemy having a developed anti-aircraft defense, the airships turned from an attacking force rather into a larger target.

At that time, the only correct decision at that time was made in Russian military circles, which was ahead of its time. The airships were assigned only the role of aerial reconnaissance aircraft, which for a long time could be in the air, hovering over the front line. At the same time, bomber aircraft were chosen as the main striking force (for the first time in history). It was in Russia that Sikorsky and Mozhaisky aviation engineers developed the world's first strategic aircraft, the Ilya Muromets bomber, which could take on board up to 500 kg. bombs. Sometimes, to increase the bomb load, a part of defensive machine guns and ammunition was removed from a ship. At the same time, these planes could take off in frost, fog, rain and be used for its intended purpose. It was for the bomber aircraft was the future, these ships have replaced the airships.

Russian airships up to 1917 year 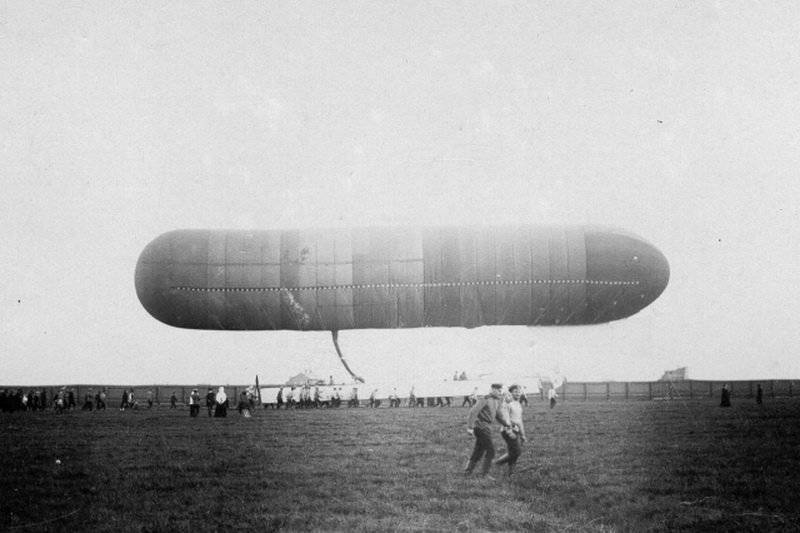 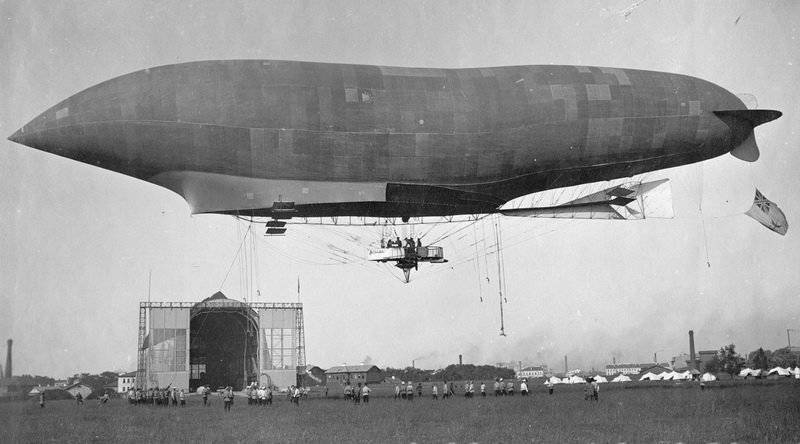 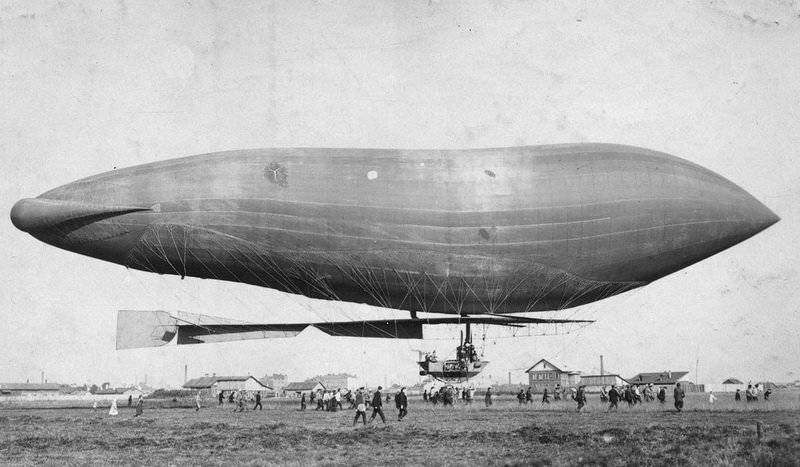 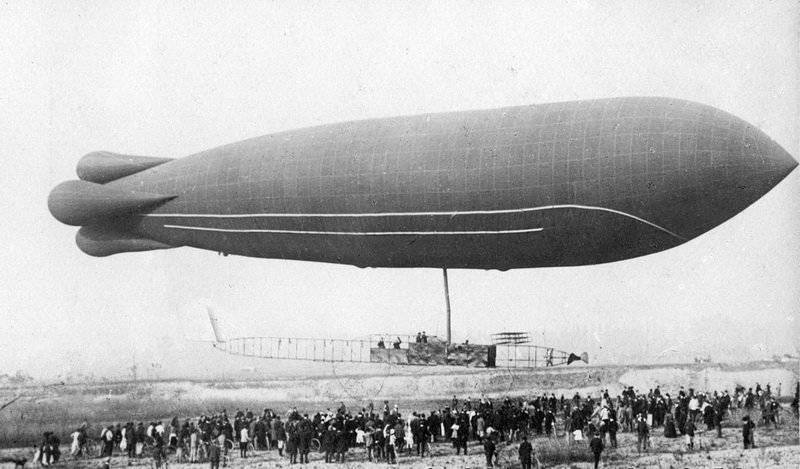 Airship "Golden Eagle"
Airship "Dove". It was built in 1910 in Russia at the Izhora plant, located in Kolpino near Petrograd, according to the design of professors Van der Fleet and Boklevsky, as well as engineer V.F. Naidenov with the participation of captain B.V. Golubova. Length - 50 m., Diameter - 8 m., Shell volume - 2 270 cube. meters, maximum speed - 50 km / h. During the First World War, this airship carried out a number of reconnaissance flights, while the Dove did not fly over the front line. In October, 1914 of the year was evacuated to Lida, where the airship was dismantled, it was reassembled only in the summer of 1916, but since the airship was in the open bivouac, its shell was damaged during the storm. 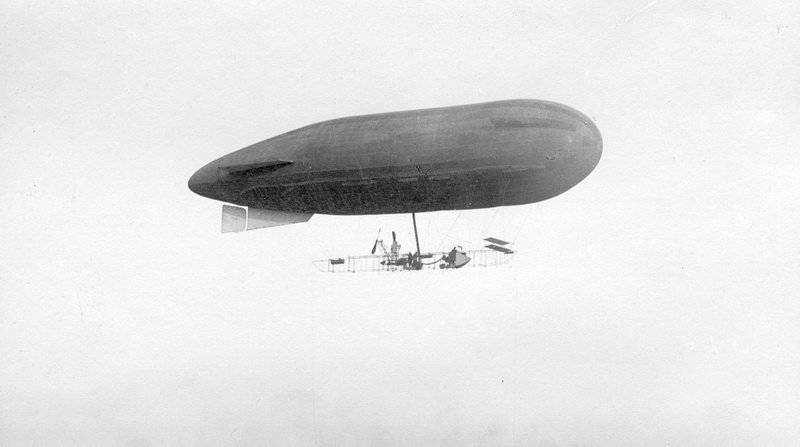 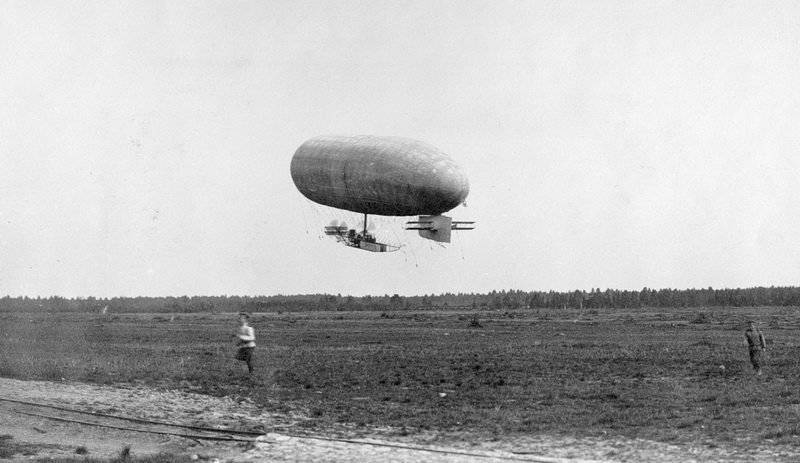 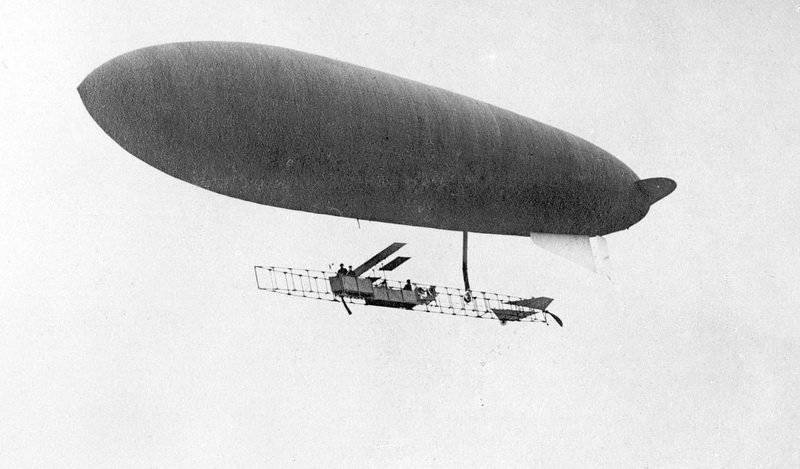 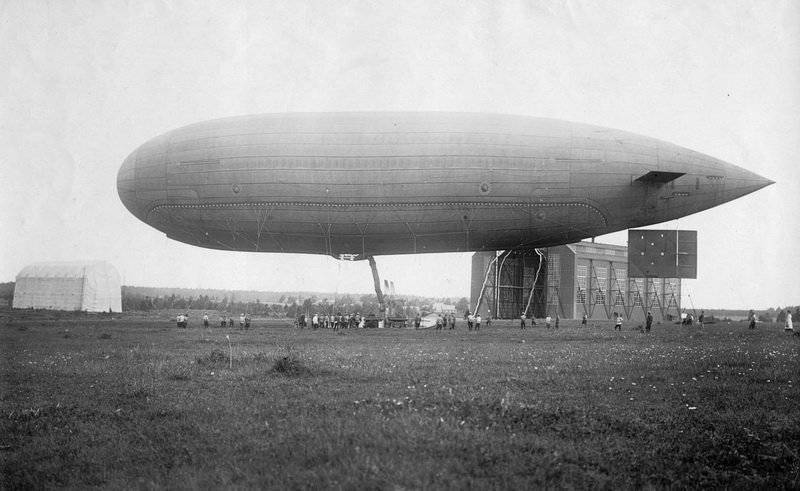 Airship "Grif"
Airship "Forceman". It was acquired by Russia in Sweden by order of the Russian military department. This airship is the smallest in the world. It was planned to purchase a series of these small airships for conducting intelligence services in the Russian army. Whether the airship was delivered in Russia is unknown. Due to the small volume of the airship, he did not have a gondola, instead of which the pilot and mechanic board was used, the weight of the engine with the power in 28 hp. was 38 kg. Length - 36 m., Diameter - 6 m., Shell volume - 800 cube. meters, maximum speed - 43 km / h. 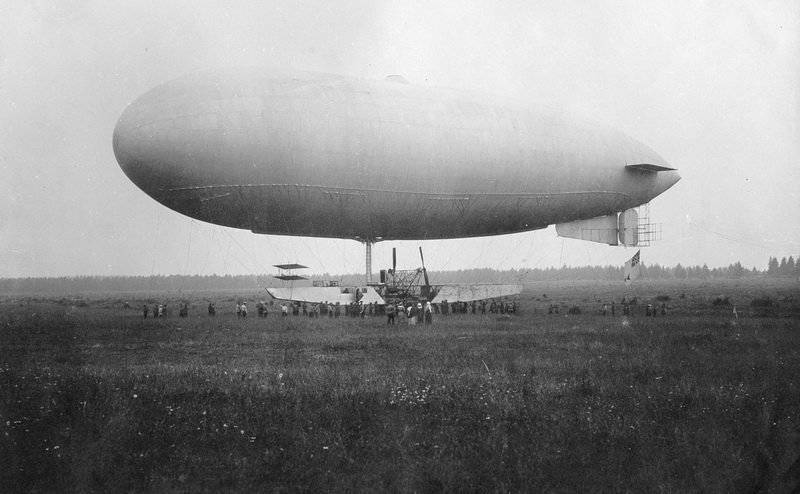 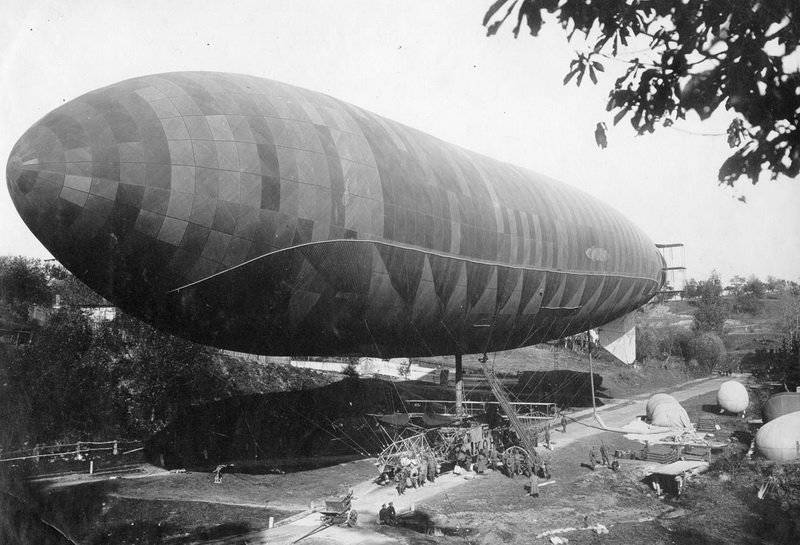 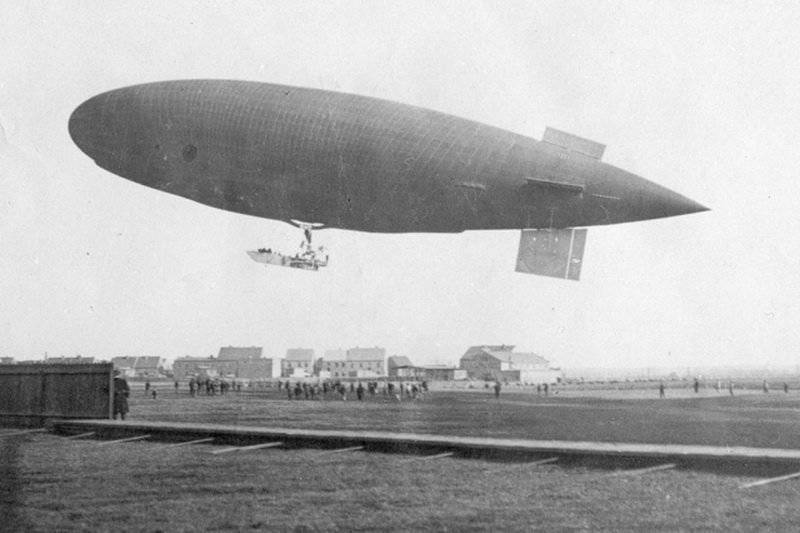 Airship "Parseval-II"
The airship "Giant". It was created in 1915 in Russia by the Baltic plant in a special slipway in the village of Salizi near Petrograd. Length - 114 m., Diameter - 17 m., Shell volume - 20 500 cube. meters, maximum speed - 58 km / h. It was the largest airship built in the Russian Empire, but it crashed during its first flight. 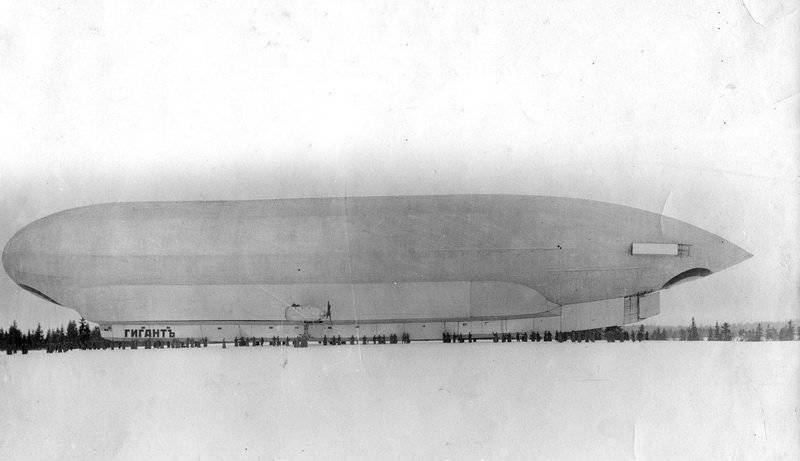 Airship "Giant"
Airships "Chernomor-1" and "Chernomor-2". Were purchased from the UK in 1916 year (the first name is "Coastal", 1916, built). Shell volume - 4 500 cube. meters, maximum speed - 80 km / h. In total, the 4 airship of this type was ordered, as a result, Chernomor-1 and Chernomor-2 performed a number of flights, Chernomor-3 burned in the boathouse, and Chernomor-4 was never assembled.