December 18 2012
17
Sometimes it is that good news upon further consideration, they turn out to be at least ambiguous or even frankly strange. A few days ago, an article appeared in an old and respected publication, which can be considered an excellent example of this phenomenon. This time, strange news related to the Moscow missile defense system. 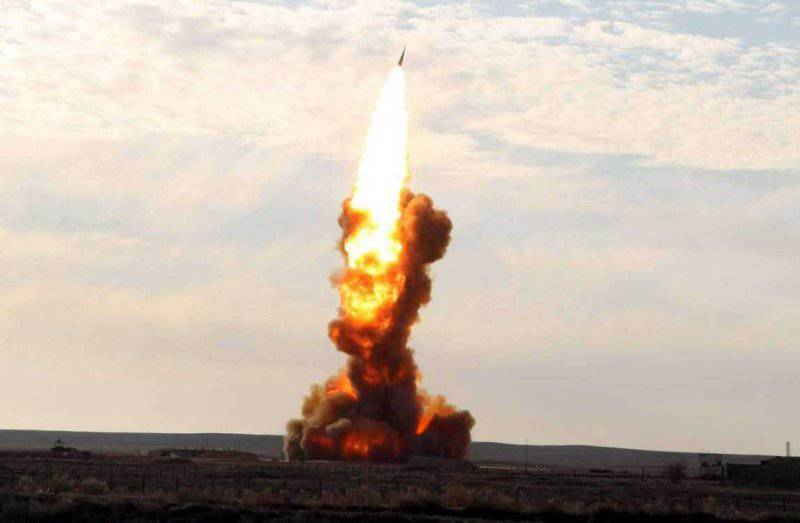 According to Izvestia, the command of the aerospace defense forces has determined the time limits for testing the new A-235 “Samolet-M” antimissile system. A certain source in the command of the Armed Forces of the East Kazakhstan region told the publication that the main test work will take place next year. At the same time, the source could not decide on exact dates. According to him, the rockets and related equipment will be tested in the last weeks of the spring of the future 2013 of the year or in the fall. Shortly after trial runs, the A-235 system will be put into service.

An anonymous source shared some test details. He argues that the purpose of future test launches is the development of 53Т6 (Gazelle according to NATO classification) missiles, which in the future will replace the current A-135 Samolet, which have been operated since the seventies of the last century. The main advantage of the new missile is the possibility of using a nuclear warhead, as on A-135, or a new kinetic one. Izvestiya provides information on the reasons for the appearance of a kinetic warhead: the development of radio-electronic technologies has so far resulted in the possibility of a significant increase in the accuracy of missile guidance. As a result, the A-235 missiles are said to be capable of pointing at a target with an accuracy of a few centimeters.

The article "Izvestia" also provides an interesting comparison of the A-235 system with the C-400 and C-500 anti-aircraft missile systems. In favor of the "Samoleta-M" is given a high altitude (up to 30 kilometers) and a large range (up to 100 km) interception. Also, the advantage of А-235 is the high speed of the intercepted targets. At the same time, according to the authors of the publication, the anti-missile system is inferior to the anti-aircraft system on the principle of targeting a missile at a target. The radio command guidance system of the Samoleta-M missiles has been declared a minus. However, an anonymous source of "Izvestia" agrees with the expediency of such a technical solution. According to him, the non-use of equipment for self-guidance is justified by the fact that when flying at high altitudes around the anti-missile a cloud of plasma is formed. As a result, the homing head does not have the ability to effectively search for a target. In this case, the missile can be aimed at a target only with the help of a powerful control signal from the ground.

At first glance, the good news is about the development of domestic anti-missile systems. However, upon closer examination, a number of characteristic things are striking that cast doubt on, at a minimum, the competence of the source “in command of the East-Kazakhstan region”. We start in order and first deal with the issue of names and time of creation of systems. First, it is worth noting that the names A-135, A-235 and 53Т6 really belong to real samples of military equipment. However, even there are errors. Person familiar with history Russian rocket technology, I would immediately notice an error with the specified deadline for the A-135 system. In fact, in the seventies, Moscow began to defend the A-35M complex. As for the A-135 “Amur” system, at that time its development was just beginning. In 1990, its trial operation began, and in 1995 it was put into service. Also worth a separate stop on the rocket 53Т6 (PRS-1). Such an ammunition does exist, but the mass production of these missiles was discontinued in 1993 year. Since then, test launches are regularly conducted, the purpose of which is to check the status of existing missiles and extend their warranty period. According to various estimates, the total number of 53Т6 rockets assembled is approximately five hundred. A tenth of this amount was used during the test.

Project A-235 also exists. Development work on the “Samolet-M” theme was launched soon after the start of construction of the A-135 complex systems. The overwhelming majority of information about this project is still classified, but some facts have already appeared in open sources. According to reports, rocket tests are currently underway for this complex, however this is not 53Т6 of А-135 system, but 53Т6М, representing an upgrade of the previous anti-missile ammunition. According to open sources, the current upgrade is to install on the rocket of the new engine and updated electronics. Also, apparently, some changes have undergone launcher and ground-based computing complex. The first launch of 53Т6М was made in November last year. In the future, this missile may become one of the means of intercepting the A-235 system. With the available characteristics, the 53Т6М rocket can be used to intercept ballistic targets at short distances. According to the authors of the site Military Russia, the appearance of medium and long-range missiles is possible, which will allow attacking targets at a distance of at least a thousand kilometers and at an altitude of about 500-600 km. However, it is currently known that only the 53Т6М rocket exists.

Data on the type of warhead updated anti-missile has not yet been published. With high probability it can be argued that after upgrading the 53Т6 rocket with the letter "M" retains the nuclear warhead. At the same time, the development of technology suggests the possibility of using non-nuclear weapons, including kinetic weapons. So, the American anti-missile SM-3 uses precisely this principle of destroying the intercepted target. When the rocket speed in 2500-2700 meters per second and the same or greater speed of the target, the collision of the antimissile with the intercepted object leads to the complete destruction of the design of both. Therefore, if it is possible to provide adequate targeting accuracy, it is possible to simplify the design of the rocket, removing from its composition a relatively heavy nuclear or high-explosive fragmentation warhead. At the same time, kinetic interception requires special precision guidance and, as a result, complicates electronic equipment anti-missiles. According to the most common opinion, the 53Т6М rocket, like its predecessor, will carry a warhead with a high-explosive fragmentation strike or a nuclear one.

The use of a radio command missile guidance system was used on all previous domestic anti-missile systems and fully justified itself. Its main advantage is the simplification and simplification of the missile control system. In addition, a quick calculation of the target trajectory and the development of control commands requires appropriate computing power, which until a certain time could be placed only on the ground. As a result, the 53Т6М rocket will retain command guidance using signals sent from the ground. As for the so-called. plasma cocoon, its formation is not due to flight altitude, but its speed. When a rocket moves at hypersonic speed, a layer of air is formed around it, which has passed into the plasma state. It screens all radio signals, which is why domestic designers had to apply an interesting technical solution. All antennas of the 53Т6 rocket are of such size and shape that they “punch” a layer of plasma. For shielding from ionized gas during the flight, they are sprayed with freon. Thus, small holes are formed in the dense plasma cloud, which allow receiving radio signals from the ground.

In combination with ground computing equipment and the original design of receiving antennas, the radio command guidance method provides the 53Т6 rocket with high accuracy. At the same time, specific deviations from the target have not yet been published. Information about the A-235 project suggests that the accuracy of the 53Т6М missiles will at least slightly exceed the performance of the basic design.

As already mentioned, the main part of information about the project A-235 is still secret. However, not so long ago - in 2010 and 2011 - information appeared in some media about work to restore the production of some components for antimissiles. This fact transparently hints at the future of the 53Т6 missiles. It is likely that the products stored in the warehouses will be converted to the state 53Т6М.

The overall secrecy of the project does not allow us to confidently talk about further actions in the course of the “Samolet-M” program, as well as the timing of the tests and adoption. In principle, one could listen to the words of an anonymous source of "Izvestia". However, a number of rather gross mistakes in his words make it possible to doubt the veracity of the information expressed. Of course, the source of the newspaper may not be related to the technical part of the project and know only the most general things of the administrative plan. Nevertheless, the competence of the “representative of the command of the troops of the EKR” makes it possible to doubt not only his words, but also the very existence of such a high-ranking source. Because of this, it would be most reasonable to take into account the information voiced by Izvestia, but not to draw far-reaching conclusions from them. Under the conditions of general secrecy of the А-235 project, as well as in a number of other cases, it is better to wait for official information from the Ministry of Defense or organizations involved in the implementation of the anti-missile program.