The history of Fritz Haber: black and white pages of science

December 21 2012
9
Not far off a hundred years from the day the First World War began. The war, which turned the familiar world over and became like a frontier in the development of our civilization, spurring progress. Too many things that became familiar after only 25 years, during the Second World War, were used with the prefix “for the first time”. Aircraft, Tanks, submarines, poisonous substances, gas masks, depth charges. I would like to talk about one of the modest “war workers”. Because the assessment of his role in stories deserves at least a long scratching in the head and considerations.

The outstanding German scientist Fritz Haber was born on December 9 to 1868 in Breslau (now Wroclaw, Poland) in the family of a Jewish merchant. That is 100% Jewish. This is not a minus, but below it becomes clear why I am focusing on this. In childhood he received a very good education, including classical languages. He received a chemical education in Berlin and Heidelberg (in Bunsen and Lieberman). After receiving a doctoral degree for a long time I could not find a case that I liked. In 1891 – 1894, he changed many places; He worked at a distillery, then at a fertilizer factory, a textile company, and even an agent for the sale of dyes produced in his father’s factory. His real career began at Karlsruhe Graduate School of Technology, where he got a job as an assistant at 1894. There he took up a new field for himself - physical chemistry. To get the position of private assistant professor, he conducted research on the decomposition and combustion of hydrocarbons. A few years later he became a professor of chemistry. In 1901, Haber married his colleague Clara Immerwald. 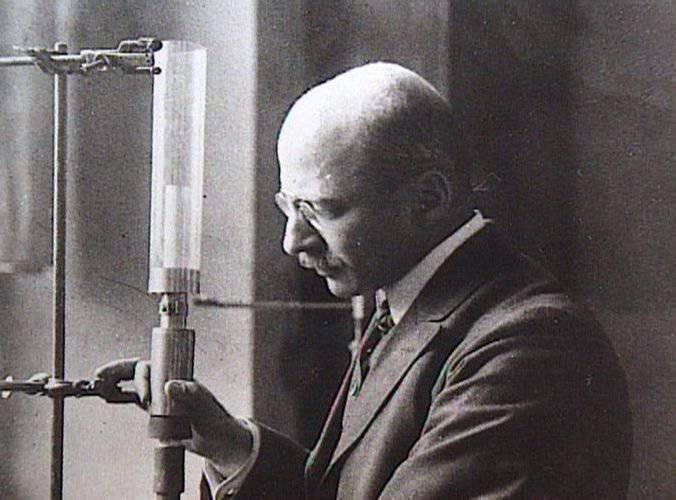 While staying at the University of Karlsruhe from 1894 to 1911, he and Karl Bosch developed the Haber-Bosch process, in which ammonia is formed from hydrogen and atmospheric nitrogen (under conditions of high temperatures and high pressure, and in the presence of a catalyst).

In 1918, he received the Nobel Prize in Chemistry for this work. By the way, deservedly, as the total production of fertilizers based on synthesized ammonia at the moment is more than 100 million tons per year. Half of the world's population feeds on products grown with the use of fertilizers obtained through the Haber-Bosch process.

And in 1932 he became an Honorary Member of the USSR Academy of Sciences.

It is white. Very white. And now I allow myself to go to black.

Fritz had one leap. I will quote him: “During peacetime, the scientist belongs to the world, but during the war he belongs to his own country.” One cannot but agree with this. And, starting with 1907, having assembled a team that also included future Nobel Prize winners James Frank, Gustav Hertz and Otto Hahn, he begins work on the creation of a chemical weapons. Naturally, it could not but lead to a natural result: the creation of mustard gas and other pleasures.

In addition, this gang invented an adsorbing gas mask, the descendants of which are still used. In his work on the effects of poisonous gases, Haber noted that the long-term effects of low concentrations on humans always have the same effect (death) as the effects of high concentrations, but for a short time. He formulated a simple mathematical relationship between gas concentration and the required exposure time. This relationship is known as the “haber rule”.

The First World War began. And Haber completely surrendered to the creation of the CEL, the good no one interfered, and on the contrary, encouraged in every way. The Hague Convention is not for geniuses. The only hindrance to the freedom of creativity was his wife - a very good chemist at the time. Some sources claim that she attended with Haber and 22 on April 1915, and witnessed the first use of chlorine with her own eyes. Some deny it. But the result was her protest expressed by 15 May with a revolver. Resolute woman, nothing can be said here, one can only regret this fact. It was necessary, for good, not shoot at yourself. And Haber went to the Eastern Front, in order to personally contemplate the use of poisonous gases against the Russians.

In the gas attack conducted against the Russians, Haber was the first to use an additive to chlorine gas, phosgene, which, unlike chlorine, penetrated through the then existing means of protection. As a result of this gas attack, 34 officer and 7 140 soldiers were poisoned (according to other sources, about 9000 people were poisoned), of whom 4 officer and 290 soldiers died. Haber was convinced that the use of gas weapons in a war was more humane than the use of conventional weapons, as this leads to shorter terms of the war itself. However, 92 000 soldiers were killed by gas during the First World War and more than 1 300 000 soldiers were disabled. At the end of the First World War, the Allies bring a list of 900 war criminals to Germany, including Fritz Haber. 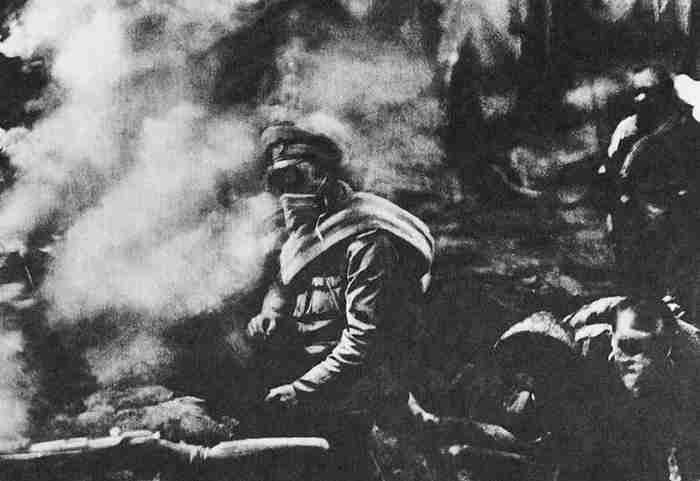 Apparently, everything went perfectly well, Haber was even awarded the title of captain by the Kaiser - a rare event for a scientist whose age did not allow him to enter military service. And in the 1916 year, Haber headed the German Military Chemical Department. As the leader and organizer of the military chemical industry in Germany, Haber was personally responsible for the "introduction" of chemical weapons into military affairs. Responding to his critics, including in his entourage, Haber stated that such is the fate of any new type of weapon, and that the use of poisonous gases is in no way different from the use of bombs or shells.

But the war is over. And when the question of awarding the Nobel Prize in 1919 came up, Haber was among the applicants. Many "fans" of his merits in the field of chemistry raised an unimaginable op, but when did the Swedish Committee listen to whom? And in the end, for the synthesis of Haber-Bosch, the Nobel Prize was awarded. Probably fair. Fed with cheap fertilizer more than gassed, so they decided. And the fact that nitrogen is used in the production of gunpowder - well, so Nobel did not make a fortune on the soap ... In general, they gave it.
"Haber's discoveries," said AG Extrand, a member of the Royal Swedish Academy of Sciences in his speech at the presentation, are extremely important for agriculture and the prosperity of mankind. "

In the 1920 year, on the advice of Haber, chemical weapons production lines, which England and France demanded dismantling, were converted to the production of chemical disinfectants, which was not prohibited by the Versailles Treaty. Necessary research and development was presented by Haber and his institute. Among the substances developed in those days by the Haber Institute is the notorious gas Cyclone-B that later became.

"Cyclone B" (it. Zyklon B) - the name of the commodity product of the chemical industry in Germany, used for the mass destruction of people in the gas chambers of the death camps. "Cyclone B" is a granule of an inert porous carrier (diatomaceous earth, pressed sawdust) soaked with hydrocyanic acid. It also contains 5% odorizing agent (bromoacetic acid ethyl ester), since hydrocyanic acid itself has a faint odor. In the aftermath of the First World War, it was widely used in Germany as an insecticide. During World War II, the Cyclone B was required by the army of the Third Reich and concentration camps for disinfection measures. Over 95% "Cyclone B", supplied to the camps, really used to destroy bugs as carriers of disease.

For the first time, Zyklon B was used for mass extermination of people in September at the Auschwitz camp at the initiative of the first deputy commander of the camp, Karl Fritsch, for the destruction of Soviet prisoners of war by 1941. The commandant of the camp, Rudolf Goess, approved the initiative of Fritsch, and subsequently it was in Auschwitz (and then not only in Auschwitz) that this gas was used to kill people in gas chambers. Mostly Jews.

But Haber will not know about it. But his son from his first wife, Herman, who immigrated during the Second World War in the United States, knew very well who invented this deadly gas that took the lives of millions of people. As well as many knew in the United States. In 1946, Herman, like his mother, commits suicide.

In 1933, after Hitler came to power, Haber's position became more than precarious because he was Jewish (not by religion, but by descent). One of the first actions of the Nazi government was the promulgation of laws of the civil code that did not allow Jews to serve in academic and governmental institutions. Since Haber was in German service during World War I, an exception was made for him, but 7 of April of that year had to dismiss Jews from his state of 12. Haber was very worried about the dismissal of his colleagues due to his national identity and soon he sent a letter of resignation.

“For more than 40-year service, I selected my employees for their intellectual development and character, and not based on the origin of their grandmothers,” he wrote, “and I don’t want to change this principle in the last years of my life.” His resignation was accepted on 30 on April 1933.

Haber moves to England, to Cambridge. But he didn’t work there. Ernst Rutherford gave him a uniform harassment, which resulted in a heart attack. Then the chemist and the future first president of Israel, Haim Weizmann, proposed to Gaber to work at the Daniel Siff Palestinian Research Institute in Rehovot (later renamed the Weizmann Institute). And in January, 1934, Haber goes to Palestine.

The words of Haber that “the well-being and prosperity of humanity require the cooperation of all nations, which mutually complement each other with natural wealth and scientific experience,” can serve as an epitaph for everything written. It sounds more than peculiar.

And the life and activity of this outstanding figure of science and industry, full of contradictions, provides rich food for thought and can serve as a lesson to the next generations of scientists.