December 17 2012
127
In the Russian army, they nevertheless decided on a new field uniform. This news, which previously went on the Internet only in the form of unconfirmed rumors, last Thursday, December 13, was voiced by Deputy Defense Minister Dmitry Bulgakov. Above all else, the "cornerstone" issue of the placement of shoulder straps was also decided. Recently, so much has been said on this score that it seems that the position of the epaulettes on the uniform is one of the most important problems of the Russian army. In general, anyone who was in charge of returning shoulder straps, you can breathe out - returned. It is assumed that the general public will be able to get acquainted with the new version of the field uniform of military personnel in the very near future, perhaps already this week.

Currently, a new form is being actively discussed in the press. At the same time, they continue to associate the former “figure” with the name of fashion designer Valentin Yudashkin, while the Main Military Prosecutor’s Office officially confirmed that the fashion designer is not related to the form criticized. Up to 40 various organizations took part in the development of the past military uniform. According to the Deputy Minister of Defense, the new form has now been adopted by the Minister of Defense Sergei Shoigu, but is still being finalized.

He also said that in a new set of military field uniforms, which is similar to the American ACU - Army Combat Uniform, epaulets were returned to the shoulders of servicemen. Dmitry Bulgakov, in an interview with Moskovsky Komsomolets, answered questions vaguely about the similarity of the new form with the American developments rather vaguely and extensively, from which the newspaper concluded that the new form would indeed be similar to Army Combat Uniform. Between themselves, the military called the new form of "cabbage". This name arose for the reason that the principle of the "seven layers" was transferred to the form kit - from underwear to jacket. At the same time, the official name of the new military uniform “Concept”, despite the fact that the final version of the new field uniform has not yet been approved, an order has already been issued for it. During 2013, the Russian army should receive the 70 000 of the Concept. 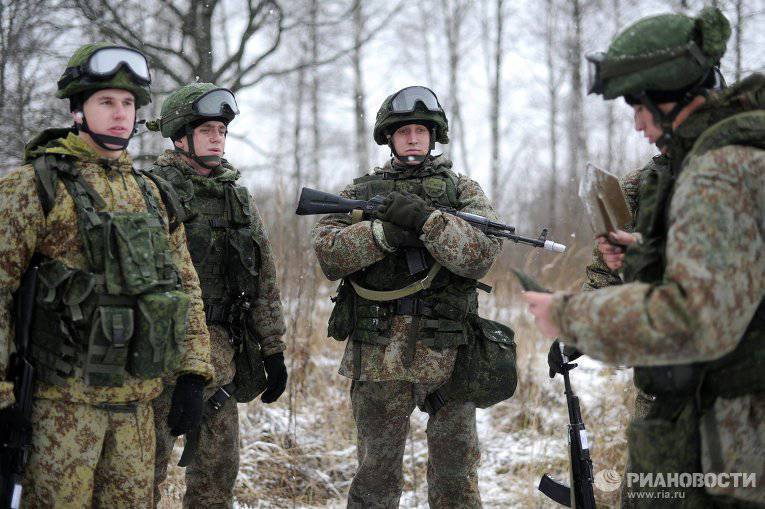 The new form was significantly refined, taking into account the recommendations of the new head of department, Sergei Shoigu, and the wishes of the officer soldiers. In this case, dressing the Russian army in a completely new form of speech is not. Replacing some of the materials used by the furniture and design delights affected only the field suit, the basic version of which was decided to make more adapted to the specifics of service in various types and types of troops, in different periods of use and climatic zones.

The field uniform was modified in such a way that it can change even depending on what soldiers and officers have to do in it — sit in the classroom (passive use phase) or run around the training ground (active use phase). For each specific occupation or day of service, the set of used elements of the “vole” will be different, it will be different in its functional purpose. So, in the complete set of the special uniform of the special forces there will be 68 socks, and the total price of such a set will be 160-190 thousand rubles. In ordinary motorized infantry elements of the form will naturally be less. It is assumed that the new form will be seven-layer and will be able to protect soldiers from temperature extremes. The cost of one field "infantry" kit will not exceed 45 thousand rubles.

Dmitry Bulgakov has denied rumors about the full identity of the new US military kit. However, the general acknowledged that foreign samples of military uniforms at the Ministry of Defense were carefully studied. The deputy minister doesn’t see anything wrong with such an approach, while he didn’t go into details regarding the new army wardrobe, having told only about some fundamental things. For example, now there are three pairs of shoes, including special winter berets that can withstand temperatures down to 40 degrees. Also, the deputy minister spoke about new berets, which now can be worn by all servicemen with casual and ceremonial uniform. 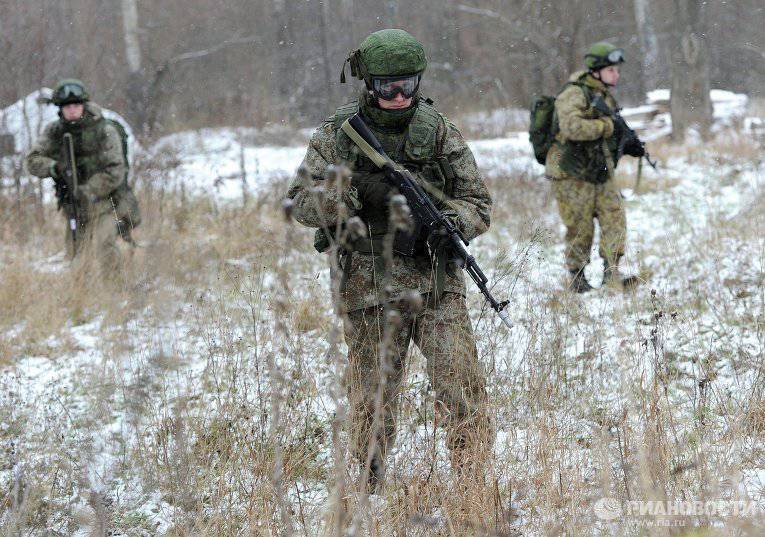 Vladislav Shurygin? the chief editor of the specialized magazine “Soldiers of Russia”, stressed that even the parts that do not have any practical use in our army were copied in the new Russian form. So, according to him, on the collar and the American and Russian jackets are on 2-e Velcro. American soldiers attach insignia to one of them, but it’s not entirely clear what will be mounted there in the Russian army. The same applies to accurately copied pockets on the pants. The American soldiers in these small pockets, located on the shins, wear individual medical packages, but at the same time, for which the Russian soldiers have these pockets, is also not entirely clear.

Vladislav Shurygin also added that even the domestic developers decided to sew the “right-sided” zipper, as in the USA. In our country, these zippers are called "women's" because they are used only in women's clothing, and they have never been used in military uniform. However, the American soldiers all lightning such as it is believed that in the event of a wounded soldier it will be more convenient to unbutton other soldiers, who will assist the injured person. At the same time, according to Shurygin, as well as on the American uniform, the zipper closes on a special strip with velcro on the Russian uniform.

At the same time, there are differences between the two forms. According to Anatoly Matviychuk, a former officer of special forces units, a candidate of military sciences, there are less 1,5 pockets in Russian uniforms. Because of this, not only a passport in the cover, but also cell phones are not placed in the Russian twist. The same trouble was noted with hip pockets. Matveychuk did not find such a solution to any justification, except for one, according to which the manufacturer simply saved on the material. He also noted the fact that the creators of ACU paid much of their attention to small elements that the Russian manufacturer of BTK Group considered unnecessary. 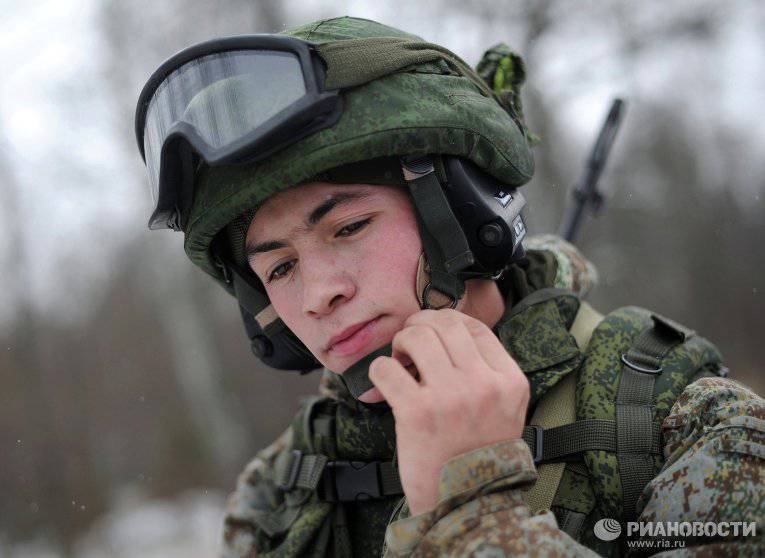 Americans have shoulder pockets completely covered with velcro for attaching chevrons, besides this there are fastenings above chest pockets for signs of military specialties, stripes with a surname and a name, etc. There is no such thing on the Russian form. In addition, there are no infrared tags that are noticeable in night vision devices, these tags on the ACU are located on the shoulders. In addition, Russia saved on pockets for ballpoint pens located on the left sleeve. Moreover, all experts agree that there is nothing bad in borrowing from foreigners.

At one time, the Americans reacted very quickly to the combat experience that they had gained during the campaigns in Afghanistan and Iraq. And the form created in the USA is considered to be very convenient. The most interesting thing is that this form is also used in Russian special forces. For example, in a number of units of the special forces of the Ministry of Internal Affairs and the Federal Security Service the American uniform ACU, produced by Propper, is being purchased in black and gray. Vladislav Shurygin admitted that he himself has been in possession of the original American uniform for almost a year now and does not see anything wrong with the fact that Russian servicemen will wear this uniform. Experts agree with those soldiers who have already taken part in the experimental wearing of a new field uniform.

According to the servicemen who participated in the pilot socks, the uniform is very comfortable, it doesn’t compare with either the old or the new one, which they began to issue in the army from 2009 onwards. They especially noted the gate, which, when laid out, does not rub the neck, and in the buttoned-up state very well protects the soldier from sand and wind. Viktor Murakhovsky, editor-in-chief of the magazine Arsenal of Russia, agrees that it does not matter who was engaged in the development of the uniform, the main thing is that it was convenient for the soldiers. According to him, copying the most successful models of weapons and equipment, as well as uniforms in the modern world, is quite common. 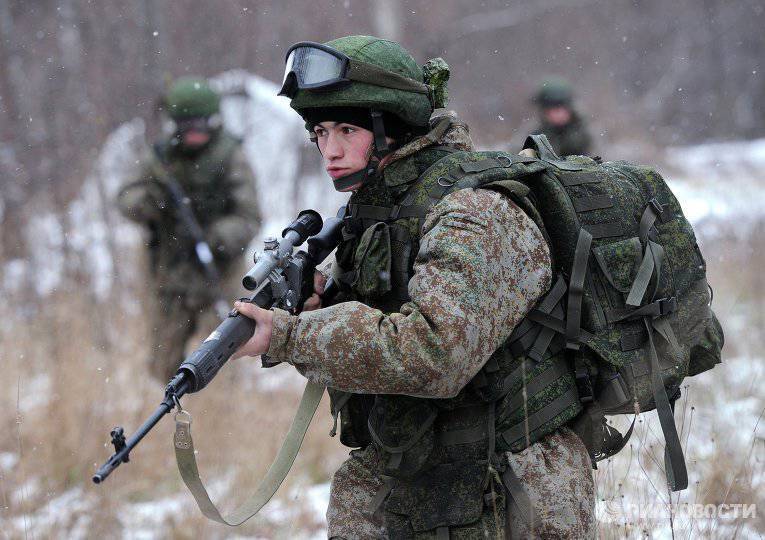 In turn, the company "BTK Group" declare that they did not copy anything, but only applied the best world developments. The developers of the new Russian field uniform explained that when they were created, they studied various sample forms from different countries and paid considerable attention to the form of the American army, as it is currently the only army in the world that regularly takes part in hostilities in various climatic conditions. . At the same time, the company stressed that it is wrong to talk about copying the American form. Also in the BTK Group, they noted that they are not afraid of the fact that the United States may make any claims to them.

The form created by BTK Group was presented to Sergey Shoigu last week, and its development was completed in 2011 year. A total of about 500 kits were manufactured, which undergo experimental testing in various units and units of the Russian Armed Forces. The American form ACU - Army Combat Uniform, in turn, was adopted by the United States Army in the 2005 year, replacing the old DCU (Desert Combat Uniform) form for desert terrain and BDU (Battrel Dress Uniform) for forest land. The form was developed taking into account the real combat experience in Afghanistan and Iraq.