Goebbels sons are friends of terrorists

December 14 2012
28
In Morocco, another meeting took place under the hypocritical name “Friends of Syria”, at which the so-called “National Coalition of the Syrian Opposition and Revolutionary Forces”, created in Qatar in November, received recognition from these pseudodrutes as the only legitimate authority of Syria. Although most of the newly-recognized either have not been to Syria long ago, or have fled from it at a difficult time, and, of course, there can be no question of any legitimacy — popular recognition —. 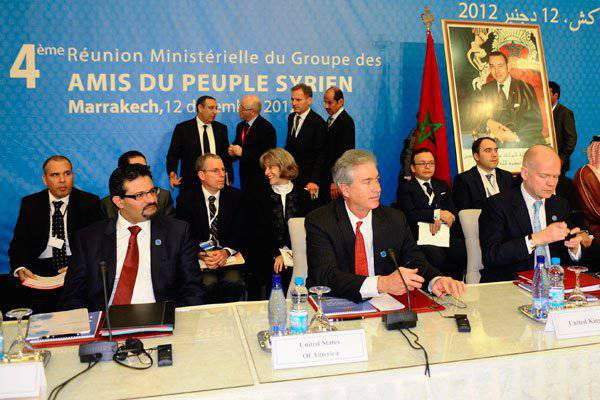 The meeting was not attended by the "mother of the coalition" - Hillary Clinton, who suddenly had an intestinal disorder. But there especially tried David Cameron, the British prime minister. He showed himself to be the real heir to the late Goebbels, who claimed that Moscow was about to fall. So Cameron poured nightingale: "You know that you can not win!" He shouted, urging Bashar Al-Assad to surrender to the mercy of the victors. More precisely, those who only dream of becoming a winner and cherish these dreams for almost two years.

And on the day of their recognition as “friends”, the so-called Syrian opposition especially dispersed. In the province of Damascus, 4 immediately committed an act of terrorism that resulted in human casualties.

In Jaraman, in the long-suffering Djaraman, a suburb of Damascus, about which you had to write more than once, two explosions thundered again. One civilian was killed, four wounded.

In Damascus itself, two explosive devices, attached to the bottom of the car, worked near the Palace of Justice in the Kanavat quarter. One person was seriously injured. Cars parked nearby were destroyed, the same fate befell the shops located near the site of the explosion.
In the evening, the whole of Damascus heard a very loud explosion. It was the terrorists who destroyed the building of the Ministry of the Interior in the Kafr Sousse quarter. There were three explosions. First - two are not too strong to lure people out into the street, make them go to the windows ... And then - the very one from which almost the whole city shook ...

The building is destroyed. According to official data, 5 people died, 23 injured. These are not only ministry employees, but also peaceful citizens - passers-by. Muhammad Al-Shaar, Minister of the Interior, was slightly injured.

Among the dead - the deputy of the People’s Council of Syria, Abdullah Keiruz. Of course, this people's representative had much greater legitimacy than the entire “Qatari coalition” put together!

And on the same day, a terrorist act was again committed in the densely populated Mezze-86 quarter, which, like Jaramana, too often becomes the target of thugs. He was repeatedly subjected to mortar attacks, it was often thundered by explosions that claimed the lives of people. This time, this quarter, a minibus full of passengers was blown up - this was the time when people were returning from work. 3 people died, 8 injured.

Unfortunately, the sorrowful list of dead journalists has been added again. Among those whose lives were killed untimely by the terrorist attack was the journalist of the Syrian state television channel Anmar Yasin Muhammad.

That is, on the very first day of “international recognition”, the so-called opposition was inspired in such a way that, at an accelerated pace, it rushed to work out its recognition, committing terrorist acts. Saudi Arabia has allocated 100 million dollars to “freedom fighters” under the guise of humanitarian aid.

The next day, December 13, the “opposition” continued to work out the credibility. The terrible terrorist attack occurred in the suburb of Damascus Katana. A strong explosion was heard at a time when students were going to school, while adults were rushing to their jobs. 16 man died, 25 injured. Among them are many women and children. A mined car exploded right outside the school building, which was badly damaged.
And not far from Homs, terrorists made an armed attack on a bus that drove to the place of work of employees of the power station. The workers opened fire and several people were injured.

The terrible case of the massacre of an unacceptable family of terrorists occurred in the village of Jobar, near Damascus. The head of the family wanted to bring his wife, who was a teacher at a music school, to work. The bandits attacked him right outside his house. When the wife came out of the door, they opened fire on her. The woman got 3 bullets, and she died on the way to the hospital.

When her teenage sons came to the cry of the mother, the gangsters wounded them - one in the stomach, the other in the back. And the head of the family was taken away in an unknown direction. He worked as a taxi driver. He was kidnapped along with his car.

There is no end to the suffering of the Syrian people from the activities of these terrorists and their friends in the West and in the Arab world. Each new tranche of bandits work in such a way that blood flows through the streets, that the country buries sons and daughters, that new widows and orphans appear. How many more terrible terrorist attacks should happen to “Friends of Syria”, finally, behind with their “friendship”?

And, of course, a very “friendly” step was taken by one of the countries - the so-called “Friends” - Greece. The government of this country sent the ambassador of Syria and two more employees of the Syrian embassy, ​​of course, under the slogan of the same “friendship”. At the same time, representatives of the Greek Foreign Ministry expressed the hope that "a friendly country will return to a stable situation." Syria and Greece are connected very much, and since ancient times, but for some reason, instead of calling on NATO partners to stop supporting terrorism in a friendly country (which would put an end to the sufferings of the Syrian people) - the leadership of Greece sends Syrian diplomats and speaks Foreign Minister Dimitris Avramopoulos that "the international community should have a unified position on the Syrian issue." This minister took part in that meeting of the “Friends of Syria”, and, apparently, after him he wanted to curry favor with the friends ...

But nevertheless - it’s necessary to try so hard to defame the holy word "friends"! They are really friends. But who? Friends of the terrorists. That’s what they should call their gathering. But in this case it will be obvious to everyone who is who. And because these chums are disguised and do not call themselves directly friends of terrorists, and are proudly referred to as "friends of Syria." However, Goebbels also believed that fascist Germany brings other nations not death and blood, but prosperity, happiness and order. And the gas chambers and concentration camps, as well as now the daily terrorist attacks - this is so, the costs of the process of luck.