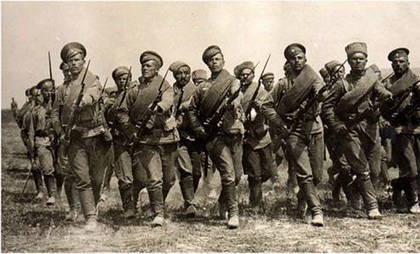 Ninety-two years ago, on November 11, 1918, at five o'clock in the morning local time, an armistice was concluded between the countries of the Entente and Germany at Compiegne Forest. The allies of Germany - Bulgaria, the Ottoman Empire and Austria-Hungary - capitulated even earlier. World War I ended.

A Russian tourist who first came to France, Britain, Italy, Belgium or Holland is surprised by the abundance of monuments to the events and heroes of that war. Avenue Foch in Paris, Rue de l'Armistice (Avenue of the Armistice) in Brussels, the tomb of the Unknown Soldier - under the Arc de Triomphe in Paris and on Whitehall Street in London. State holidays - Armistice Day in France and Belgium, Memorial Day in the UK, Veterans Day (initially - Armistice Day too) in the United States. And hundreds of monuments on the battlefield, as well as in cities and villages, usually with lists of the fallen, who had gone from here to the front.

For us, this is a wonder. Under the Soviet power in the territory of our country, as far as the author is aware, not a single monument appeared to those who died in that war (and the ones that had been erected earlier were destroyed in 1920-s). Recently, something has changed: now there are Brusilov streets in Moscow and Voronezh, a memorial stele in the territory of the Bratsk cemetery in the city of Pushkin, memorial signs in Moscow in the Sokol district on the site of the formerly urban Bratsk cemetery. But still there is not a single museum of that war (there are separate expositions in military museums), in school textbooks - a paragraph, by force. In short, almost oblivion, another “unknown” war ...

But the fighting losses of the Russian Empire amounted to 2,25 million soldiers and officers - 40% losses of the Entente and almost a quarter of all military losses of that war. And most importantly - this war has changed the course of our stories to a much greater extent than the incomparably more memorable World War II.

1913 was a prosperous year for the Russian Empire. In the country, industrial growth started in 1908 continued, economic growth rates were among the highest in the world. Agrarian reforms were carried out, slowly but surely increasing the number of independent well-to-do peasants (again, it was lucky: a few fruitful years in a row, a very favorable conjuncture of world grain prices). Gradually, the wages of workers grew, working legislation improved. The number of literates grew rapidly. After the 1905 revolution, the situation with civil liberties improved markedly. The revolutionary parties experienced an organizational and in many respects ideological crisis and did not have a significant impact on the situation in the country. On the third attempt, the State Duma - not yet a full-fledged parliament, but already its obvious harbinger - was able to establish some sort of dialogue with the authorities.

Of course, there is no need to idealize pre-war Russia, there were a lot of problems, both social, political and economic. But in general, the situation was far from critical.

The war began in an atmosphere of unprecedented patriotic recovery. The liberal opposition fully took up the defensive position, deciding to postpone the attacks on the government "after the war." Quite organized, without serious disruptions, mobilization took place, a large number of volunteers rushed to the front. Despite the failures against the Germans in the territory of East Prussia and Poland, the general course of action on the Eastern Front, given the great success against the Austrians in Galicia, could be considered quite satisfactory. It seems that everything went smoothly and, it seemed, did not foretell a catastrophe in less than three years.

Firstly, the patriotic upsurge was rather quickly replaced by a growing disappointment in the ability of the authorities to effectively lead the country in the conditions of a protracted war. The famous “ministerial leapfrog”, when the 4 chairman of the Council of Ministers, the 6 interior ministers and the 3 military ministers replaced 1915 during two and a half years of the war, was an excellent illustration of this incapacity. The emperor’s categorical unwillingness to form a “government of national trust” rather quickly nullified the emerging union between the executive power and the State Duma, and now not only the Cadets but also moderate nationalists were in opposition. An extremely unsuccessful personnel reshuffle, which had far-reaching consequences, was the decision of Nicholas II to replace the Commander-in-Chief of Grand Duke Nikolai Nikolaevich (competent and experienced military man, popular in the army) after the failures of XNUMX on himself. As a result, order and managerial efficiency did not increase either in Petersburg, from where the emperor departed, or in the headquarters in Mogilev, where he arrived. Another evidence of the incompetence of the upper ranks was in the eyes of society the figure of Rasputin and the influence he gained at court; and in the Duma, and among the people openly talked about treason.

Secondly, already in 1915, significant economic difficulties appeared. Caused by the growth of military traffic, the crisis of railway communications led to difficulties in the food supply of cities, expressed in the introduction of cards for some essential goods. The mobilization of several million able-bodied men and hundreds of thousands of horses has undermined the precarious pre-war well-being in agriculture; The situation was not much better in the industry, where enterprises not connected with military orders were forced to shut down or cut production. The supply of the front was also carried out with great difficulty.

Thirdly, the war led to the marginalization of a significant part of society. This includes refugees from the western regions of the empire, lost during the retreat of the spring-summer of 1915 (this unsuccessful campaign cost Russia 1,5% of its territory, 10% of railway tracks, 30% of its industry; the number of refugees reached ten million). It is also peasants who have fled to the cities to replace the workers who have gone to the front. These are university graduates who have become wartime officers to compensate for the enormous losses of personnel officers. All this will lead to significant shifts in the minds of these people who find themselves in completely unusual circumstances, resulting in ideological and moral disorientation. Peasants and workers dressed in soldiers' overcoats, the farther away, the less they sought to get to the front (it is no coincidence that soldiers of spare and training parts who categorically disagree to go into the trenches) would be one of the main driving forces of the October 1917 events.

As a result of these and other processes, which the format of the article does not allow to mention, in February the 1917-th three-hundred-year-old dynasty left the historical arena, and few in Russia worried about this. However, she did it too late, and the democratic Provisional Government, which inherited all the problems of both previous years and previous decades, could not keep the situation under control.

Why was all this? What sacrificed millions of lives, stability and progressive development of society? For control of the Black Sea straits? For the chimera of "Slavic unity"? For the very “little victorious war” that strengthens the mystical connection between the monarch and his subjects?

The monarchy did not draw lessons from the very recent Far Eastern catastrophe. For which he paid. And God would be with her, but we, too, today, continue to pay for her confident nearness, for her direct product was the October 1917 of the year.

What are the monuments here ...