Unfortunately, even the most advanced designs weapons Sooner or later they become obsolete, and they are replaced by others who, even if a little, but better, more convenient, more reliable. So, despite the fact that firearms have long been deadlocked, and something fundamentally new has not been invented for a very long time, work on new models does not stop and existing designs are improved, brought if not to the ideal, then picking up very close to him. So, a striking example is the NK 121 machine gun, which at the moment is the main version of the weapon that can come to replace the MG3 machine gun. 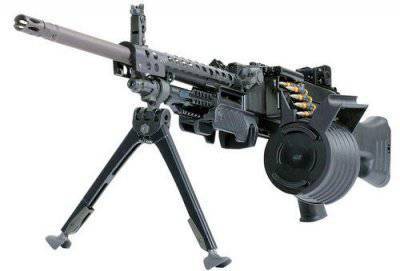 Despite my most loyal attitude towards the MG3 machine gun, it cannot be denied that the weapon is already outdated and needs to be replaced with a more sophisticated and modern model, especially since MG3 no longer fits into modern requirements for a single machine gun, and its release was completed in 2009 year. So, the main contender for the vacant place of this weapon is the Heckler und Koch HK121 machine gun. This machine gun is a bright representative of modern single machine guns, combines all the developments in a firearm for the last time. Very pleased with the fact that in the race for weight loss, the designers did not replace everything that was possible with plastic, limiting it only to a number of individual massive elements, such as a butt, the strength of which is beyond doubt. The weapon has the ability to conduct only automatic fire, because on its both sides there is only a two-position fuse switch. Its location turned out to be very successful indeed, being an element large enough, this switch is located directly above the pistol grip of the weapon, so that the thumb of the holding hand rests on it to switch. But the shutter handle is located only on the right side of the weapon and can not be rearranged to the left side. Likewise, a loose ribbon from which this weapon feeds can only be fed from the left side. The butt of the machine gun is folded to the left, and also has the ability to adjust along its length. The bipods of the machine gun are attached to the vapor block of the weapon, located under the barrel of the weapon. The very same machine gun barrel quick-change, has a handle for carrying and replacing the barrel, air cooling. Sights can be very diverse: from standard open to optical and electronic sights, which are installed on the seat on top of the weapon. The barrel is equipped with a flame arrester. Also, the weapon is equipped with a folding handle, which is designed for firing "from the hands", in the folded position, this handle becomes a short likeness of the forearm. In general, the appearance of the machine gun makes a good impression, despite the fact that the considerable weight of the weapon is clearly visible, the machine gun seems to be very comfortable.

This unit is powered by NATO 7,62x51 cartridges. Himself machine gun with butt and bipod weighs 10,8 kilogram. Its length is 1165 millimeters, with a barrel length 550 millimeters. In general, the weapon turned out to be even greater than the MG3, but shorter and more ergonomic. From the rate of fire of the machine gun, nothing is as yet precisely known; nevertheless, it is logical to assume that its rate of fire will equal 700-800 shots per minute and 1100-1200 shots per minute. The machine gun can be installed on all the machines that were used with the MG3, as well as to use fasteners on armored vehicles.

It works all happiness with automation, built on the removal of powder gases from the barrel with a long stroke gas piston. The shot comes from the open shutter, the barrel bore is locked on the 2 combat stop when turning. It feeds on a machine gun, as mentioned above, from loose ribbons, which can be supplied both separately and from containers, like those used in MG3.

Looking at the weapon, it is impossible not to notice its very great similarity with the HK43 machine gun, which uses 5,56 cartridges, being a light machine gun. Despite the fact that the main components of the NK 121 machine gun have long been tested in other samples and all the nuances of their use are known, this machine gun is still under test from the middle of 2011 onwards. Well, it’s possible to regard this as proof that the weapon has problems, or as a very strict approach to the choice of a new machine gun by the Germans only after the tests are completed and their result appears. In the meantime, everyone who came across these weapons in the inserts was completely satisfied with both the quality and the thoughtfulness of the design. Although in my opinion it is early to draw conclusions based on tests, but when the weapon receives recommendations on the battlefield, then it will be possible to speak with confidence about its positive and negative qualities.